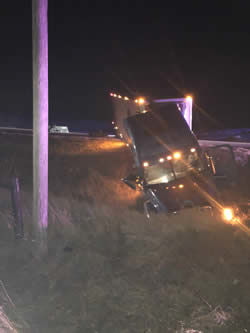 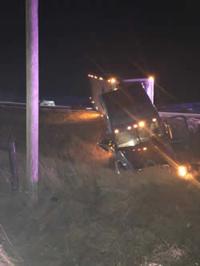 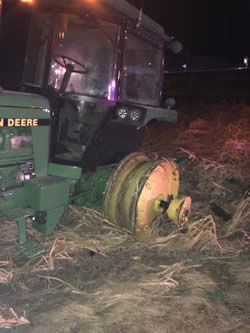 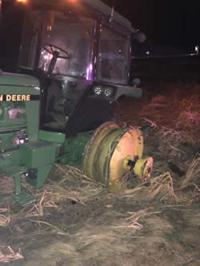 STANTON - A multi-vehicle accident sent one to the hospital Monday night.

According to Stanton County Sheriff Mike Unger, the accident occurred on Highway 15 about two miles south of Highway 32.

A northbound semi driven by 63-year-old Jeffrey Varrelli of Council Bluffs Iowa passed a northbound John Deere tractor in a no passing zone.

They came into contact and both vehicles left the roadway coming to rest in the east ditches.

A northbound pickup was also involved and ended up off the road in a creek.

The 13 year old driver of the tractor was transported to a West Point hospital by Clarkson Fire and Rescue with minor injuries.

The highway was closed for more than seven hours as the scene was investigated and cleared.

Norfolk Fire hazmat also responded to the scene to clear a fuel spill into a creek. Stanton County Emergency Management and the Nebraska Department of Transportation assisted with traffic control and the highway closure.

OMAHA, Neb. (AP) — The National Weather Service has issued a flash flood warning for rural parts of south-central Nebraska after up to 8 inches of rain fell in the region overnight.

Man arrested in shooting death of another in North Platte

NORTH PLATTE, Neb. (AP) — Police in western Nebraska have arrested a man in the fatal shooting last week of another man in North Platte.

Efforts underway to get food from US farms to the needy

OMAHA, Neb. (AP) — One of the many troubling aspects of the coronavirus pandemic has been seeing farmers have to destroy crops and euthanize livestock at a time when millions are losing their jobs and demand is soaring at food banks.

OMAHA, Neb. (AP) — An eighth resident at a western Omaha nursing home has died from COVID-19, as Nebraska health officials reported three new deaths and 145 news cases of the virus.

NORFOLK - A Norfolk man was sent to jail after threatening his relatives and officers Saturday night.

NORFOLK - A woman was physically assaulted in her apartment early Saturday morning in Norfolk.

LINCOLN, Neb. (AP) — Police have identified the 31-year-old man who was killed in a shooting in a Lincoln alley.

OMAHA, Neb. (AP) — Police have identified the man who died after being shot in southeast Omaha early Sunday.