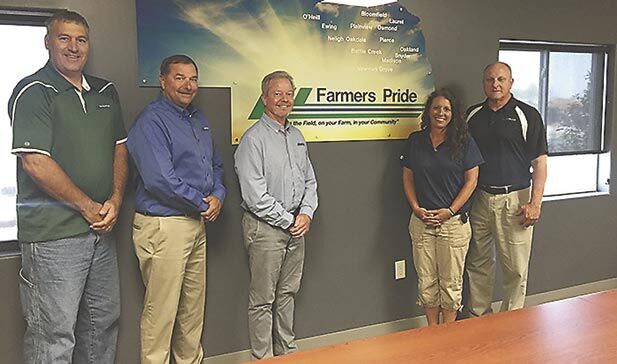 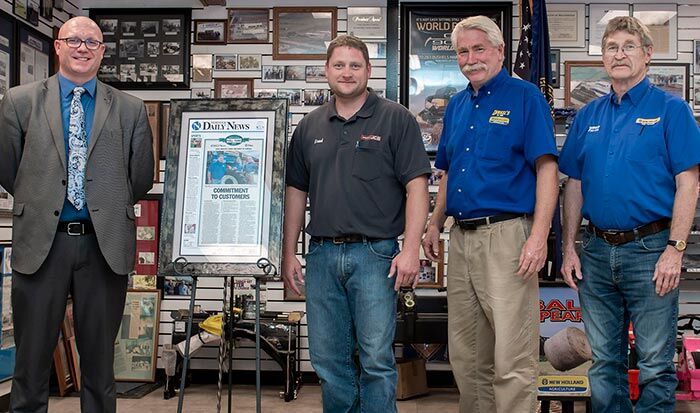 Adam Thompson (left) from First National Bank of Omaha in Norfolk stands with members of the Dinkel family, Brad Dinkel (from left), John Dinkel and Larry Dinkel, at a reception where Dinkel Implement was inducted into the Norfolk Area Business Hall of Fame.

Adam Thompson (left) from First National Bank of Omaha in Norfolk stands with members of the Dinkel family, Brad Dinkel (from left), John Dinkel and Larry Dinkel, at a reception where Dinkel Implement was inducted into the Norfolk Area Business Hall of Fame.

BATTLE CREEK - A farm supply and grain marketing cooperative owned by the people they serve has received special recognition.

Farmers Pride was recently inducted into the Norfolk Area Business Hall of Fame. The hall of fame is a recognition program created by the Norfolk Daily News and First National Bank in Norfolk to honor deserving local and area businesses for their longevity, their commitment to their employees and their involvement in civic and charitable affairs.

General Manager Dean Thernes tells News Talk WJAG it was established in Battle Creek as a creamery cooperative in 1929.

Thernes says since then Farmers Pride has expanded to serve 30 counties in Northeast Nebraska.

"Just over time as we all know agriculture has been very challenging for everybody in the industry and throughout that has led to some consolidations of some locations and merging together of companies. Agriculture continues to be challenging and we believe that by bringing these companies together we've been able to better serve the membership of farmer owners of the company and bring them value every day."

Thernes adds he’s honored to win the award and this isn’t possible without all of the customers and employees.

Dinkel Implement was also inducted into the Norfolk Area Business Hall of Fame.

McCOOK, Neb. (AP) — A 79-year-old McCook woman accused of killing her husband while he slept has pleaded not guilty.

LINCOLN, Neb. (AP) — Authorities have arrested a 19-year-old who is suspected of ramming two unmarked patrol cars and another vehicle to escape being arrested last week in Lincoln on several felony warrants.

GRAND ISLAND, Neb. (AP) — Grand Island police are investigating the theft of about $250,000 in jewelry and other items after burglars cut through a wall next to the store.

HASTINGS, Neb. (AP) — Hastings College is pausing some in-person classes and all of its athletics this week after six members of the college tested positive for the coronavirus and another 54 were self-isolating or in quarantine.

Nebraska gets $46 million in federal money for road repairs

LINCOLN, Neb. (AP) — Nebraska will receive more than $46 million in federal money to help pay for repairs to roads and bridges that were needed after widespread flooding struck the state in the spring of 2019.

PIERCE - An investigation is underway after an altercation between a Pierce man and officers early Tuesday morning.

Presidential debates are simply job interviews where “we the people” are determining what a potential employee will do in any given situation.

Fall is the best time to plant a new tree

LINCOLN - If you’ve been wanting to plant a new tree now is the best time to do so, not the spring.