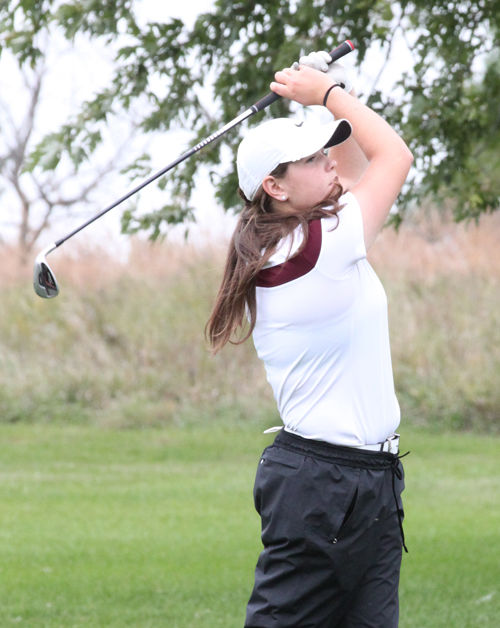 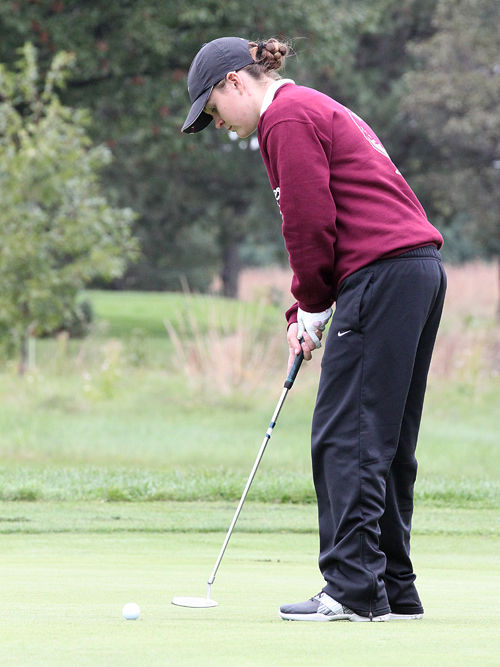 Norfolk golfer Mariah Yagow putts the ball on the 18th hole Monday at the District A1 Girls Golf Tournament at Mahoney Golf Course in Lincoln. Yagow finished with a 100 to miss qualifying for state by eight strokes.

Norfolk golfer Mariah Yagow putts the ball on the 18th hole Monday at the District A1 Girls Golf Tournament at Mahoney Golf Course in Lincoln. Yagow finished with a 100 to miss qualifying for state by eight strokes.

LINCOLN – Norfolk’s Allison Temple shot an 85 to qualify for the Class A State Girls Golf Tournament, placing fourth at the District A1 Golf Tournament Monday at Mahoney Golf Course in Lincoln.

Temple shot a 42 on the front nine and 43 on the back nine, playing with top-three state qualifiers Makenzie Fuss of Omaha Marian and Omaha Westside’s Alexis Rose, who placed third with an 84. Fuss shot an 81 to place first after a playoff with her teammate Grace McMinn, who was second with an 81.

Out of 18 holes, Temple either hit par or bogeyed on 17 holes to maintain a consistent performance on the links.

“I stuck the ball really well,” Temple said, adding her putting could have been better. “My goal was to keep up with Makenzie. I know she’s a great player and I knew she was going to shoot well today. So if I could keep up with her, I was going to make it.”

Norfolk coach Lance Kosch said of Temple: “She’s played great all year – 85 is right around what she has averaged. I really couldn’t ask for much more of her.”

Omaha Marian clinched the district title with a 338 and qualified four out of five golfers, who carded two 81s and two 88s on the par-72 course. Omaha Westside followed with 378 and one individual qualifier and Lincoln East finished third at 382 with two individual qualifiers. The top 10 individuals and top three teams advance to the state tournament.

“We came down here earlier in the year and shot 384,” Kosch said. “I figured it would take around a 380 mark and knew we were capable of it. I thought we were playing better this time of year vs. when we had our (last) tournament out here. We just had an off day. Our back-nine struggles have really cost us.”

Panther No. 2 golfer Mariah Yagow finished with a 100, hitting par once and bogeying on five holes on the front nine for a 49. But Yagow struggled on the back nine, reaching par twice and scoring two bogeys for a 51.

“I just wasn’t playing my best round,” she said, expecting to shoot in the low 90’s. “I thought I could par at least four or five holes (on the back nine) and I think I only ended up parring two. The putting was definitely a little bit off. Some of the pins (on the greens) were placed kind of hard and they seemed to go around the cup a couple times instead of falling in. They definitely hurt a bunch of people, just not me.”

Kosch added: “She (Yagow) didn’t hit the ball too bad, but she really struggled with her putting. She had a couple of big numbers on two of the par five’s, which is uncharacteristic for Mariah.”

The Panthers No. 5 player Hannah Carhart finished with a 104, with No. 3 and No. 4 golfers Joselyn Lewis and Lauren Osweiler each capping the season with a 109.

Temple said she hopes to medal this year, and Kosch said that familiarity with the country club course will serve her well next week.

“Her goal all year has been to get to state,” he said, adding his expectations are higher for her with state at NCC. “She can finish in the top five. And who knows? She could put together a couple of good rounds and win the tournament.”

LINCOLN, Neb. (AP) — Brad Davison couldn’t hit a shot in practice the last two days, but that changed Saturday when he scored 30 points on 8-of-11 3-point shooting to lead Wisconsin to an 81-64 win and send Nebraska to its school-record tying 10th straight loss 81-64 on Saturday.

Boys basketball scores from around the area and across the state

Girls basketball scores from around the area and across the state

HUMPHREY - After playing through an 18-18 draw through one quarter, Humphrey St. Francis turned on the afterburners en route to an 80-44 victory over visiting Elkhorn Valley.

Boys basketball scores from around the area and across the state

Should the players involved in the MLB sign stealing scandal also face punishment?