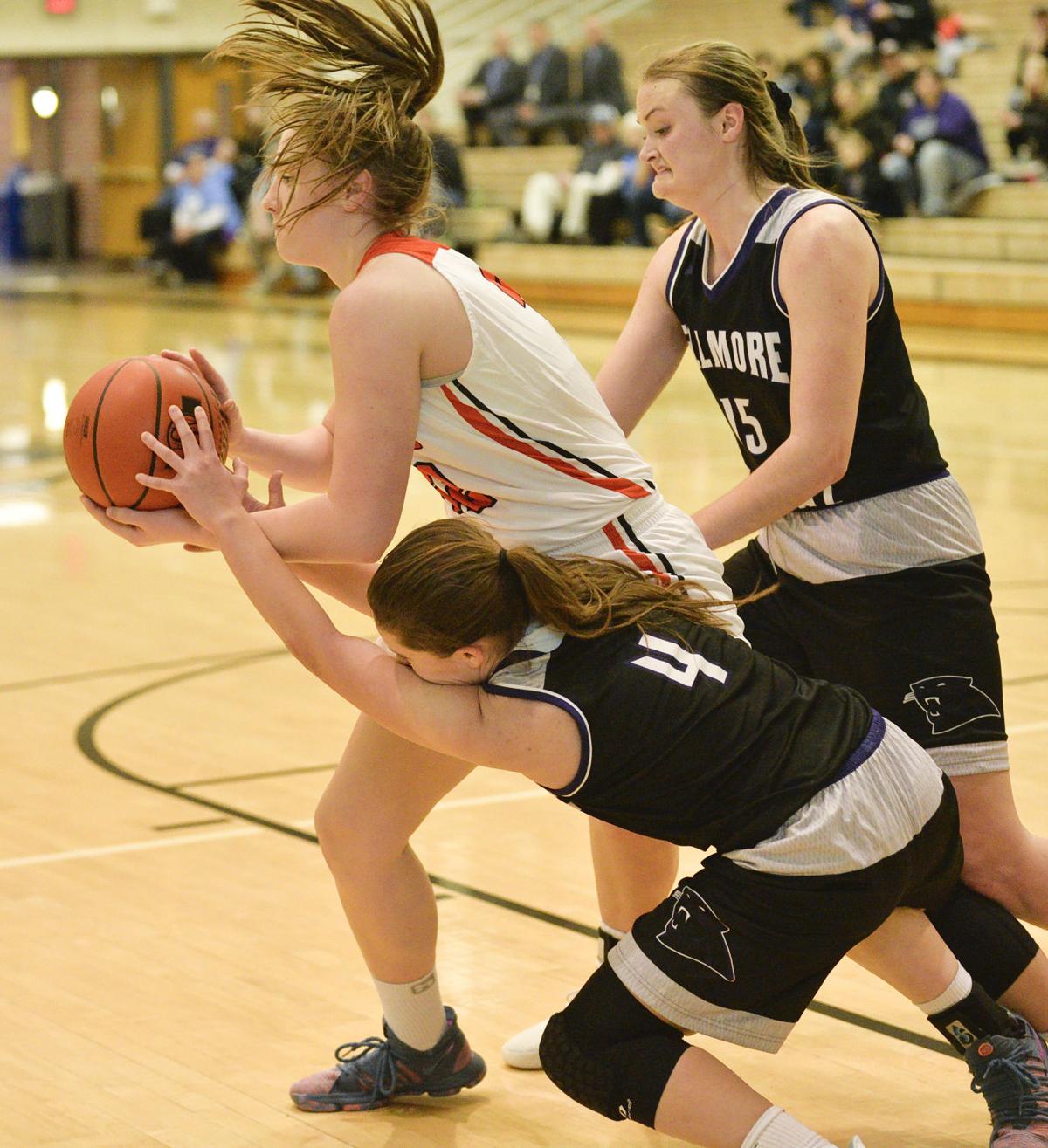 DARIN EPPERLY/DAILY NEWS LINCOLN -- Makenna Pearson of Oakland-Craig looks to pass the ball as Jacquelyn Schelkoph (4) of Fillmore Central gets a hand on the ball during the Class C2 consolation game on Saturday morning at Lincoln Southeast High School. Erin Schmidt of Fillmore Central helps in coverage. 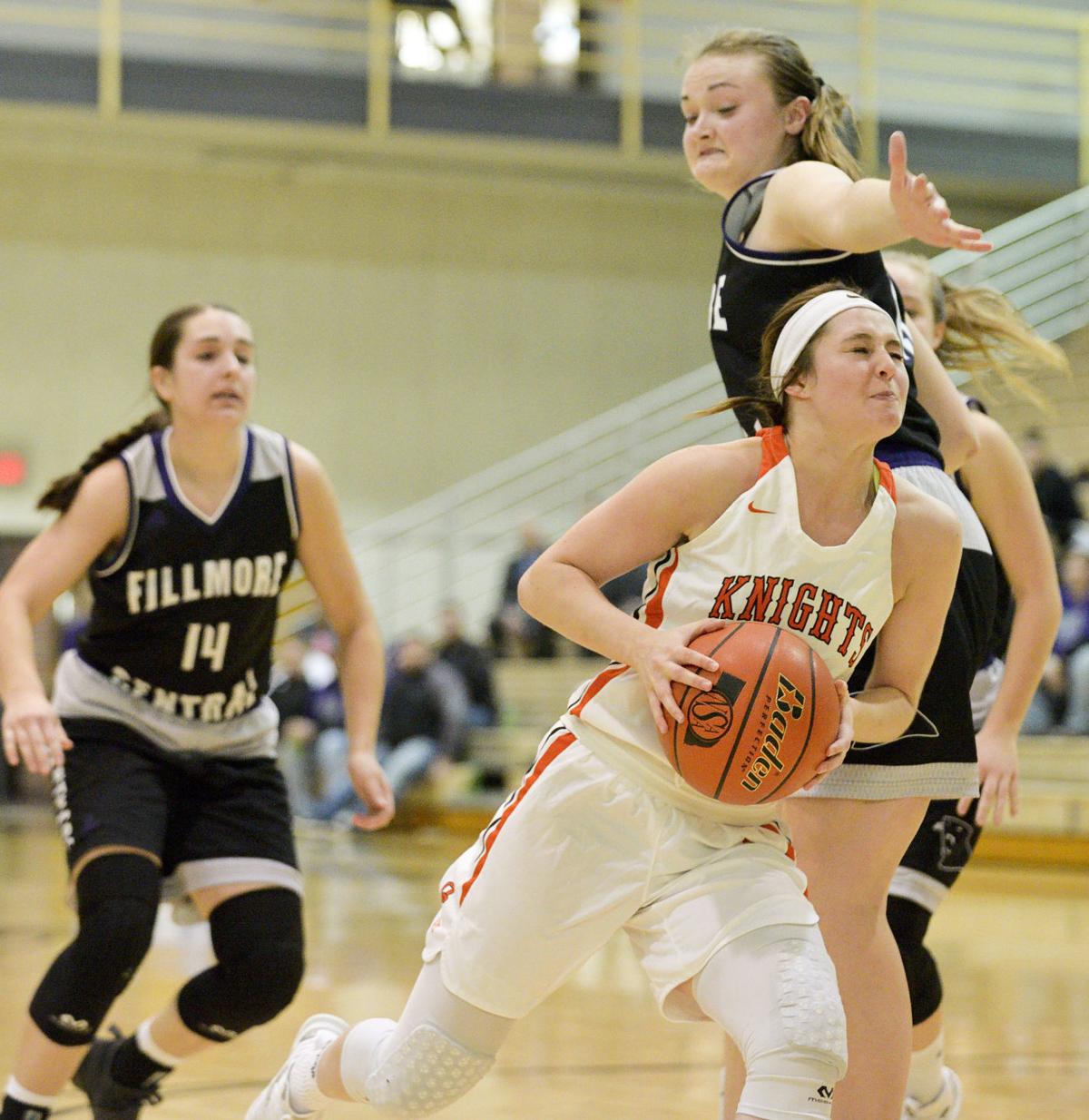 DARIN EPPERLY/DAILY NEWS LINCOLN -- Makenna Pearson of Oakland-Craig looks to pass the ball as Jacquelyn Schelkoph (4) of Fillmore Central gets a hand on the ball during the Class C2 consolation game on Saturday morning at Lincoln Southeast High School. Erin Schmidt of Fillmore Central helps in coverage.

LINCOLN - Oakland-Craig's Dacey Nelson ended her brilliant career by scoring 31 points and leading her Knight teammates to a third-place finish in Class C2, with a 68-60 victory over Fillmore Central on Saturday at Lincoln Southeast High School.

Despite its status as a consolation game, the players from both teams played with the same intensity they'd used to advance to the Class C2 semifinals.

Before the game, Oakland-Craig coach Joe Anderson said despite missing out on playing for a state title - after Friday's heartbreaking overtime loss to Hastings St. Cecilia - his Knights relished the opportunity to play one more game and end their season with a win.

"Our girls are excited to get to play together again," he said. "They want to go out with a win and it's another great opportunity to play with the same girls they've played with since kindergarten."

The Knights played from behind for most of the first quarter and gave up six offensive rebounds, but forced six turnovers and trailed 16-12 before going on a 7-0 run to end the first quarter.

Fillmore Central used its size advantage early in the second quarter. Jacquelyn Schelkopf and Halle Theis both scored on put-backs for a 20-19 lead.

Both of the Knights' leading scorers - Dacey Nelson and Kennedy Benne - struggled to find the bottom of the net in the second quarter, but found another way to help by driving to the basket and setting up teammates for easy layups. Oakland-Craig led 33-32 at the break.

Nelson - who was held to "only" nine first-quarter points - raced out of the gate early in the third quarter by driving through the lane for a layup, sinking a running jumper, converting on a couple of free throws and draining a 3 from the right wing.

Nelson made the final quarter of her career count by hitting a 3, driving to basket for a layup and one, and converting on eight of nine free throws.

Fillmore Central pulled to within three at 53-50 following a Macy Scott free throw at the 4:35 mark but Nelson outscored the Panthers on her own 13-4 in the next four minutes to put the Knights on top 66-54 with just under a minute to play.

Benne scored her 12th and 13th points with a pair of free throws 22 seconds later to seal the deal for the Knights.

Nelson said after dealing with Friday's disappointment, she and her teammates made going out with a win, a priority. "Last night, it was like, oh, 'third-place game, nobody wants to play in that,' but then we woke up this morning and were like, 'You know what, no one's going to think of us as a second-place team if we get fourth; let's go get  third.' "

Benne, a junior, saluted her senior teammates. "I've been playing with (the seniors) since second grade and I'm going to miss them a lot next year, and they've definitely made an influence and big impact on Oakland-Craig girls basketball and we'll remember this year forever."

Besides Nelson, the other Knight seniors who ended their high school careers with bronze medals were McNeill, Ashley Denton and Ellie Weitzenkamp.

Oakland-Craig finished with an outstanding record of 22 wins and four losses.