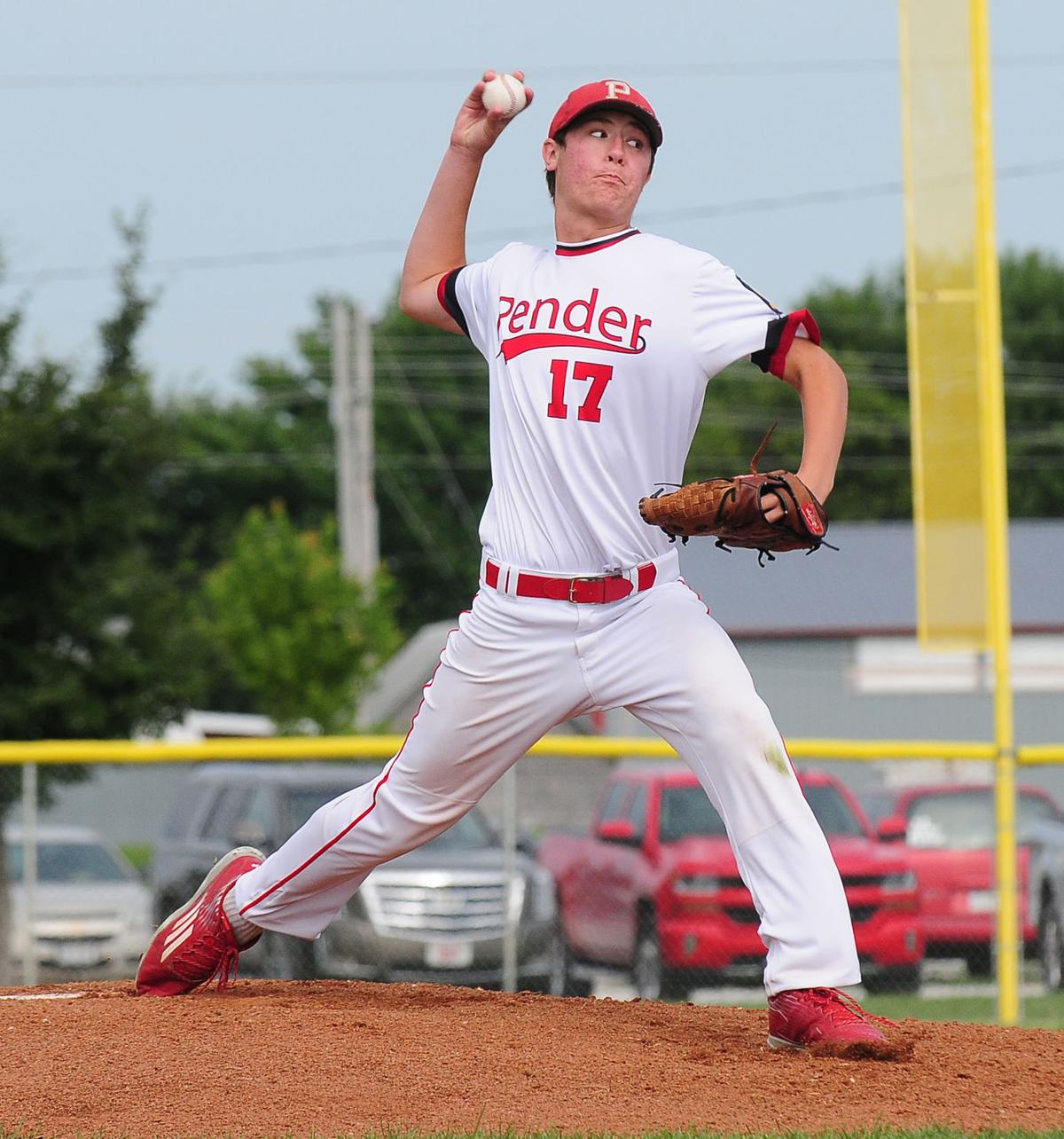 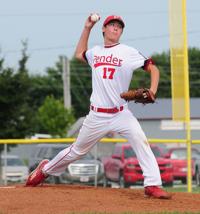 Zach Hegge of Pender throws a pitch during the first inning of Tuesday's game against Bruning-Davenport/Shickley in the Class C American Legion Seniors state tournament in Syracuse. 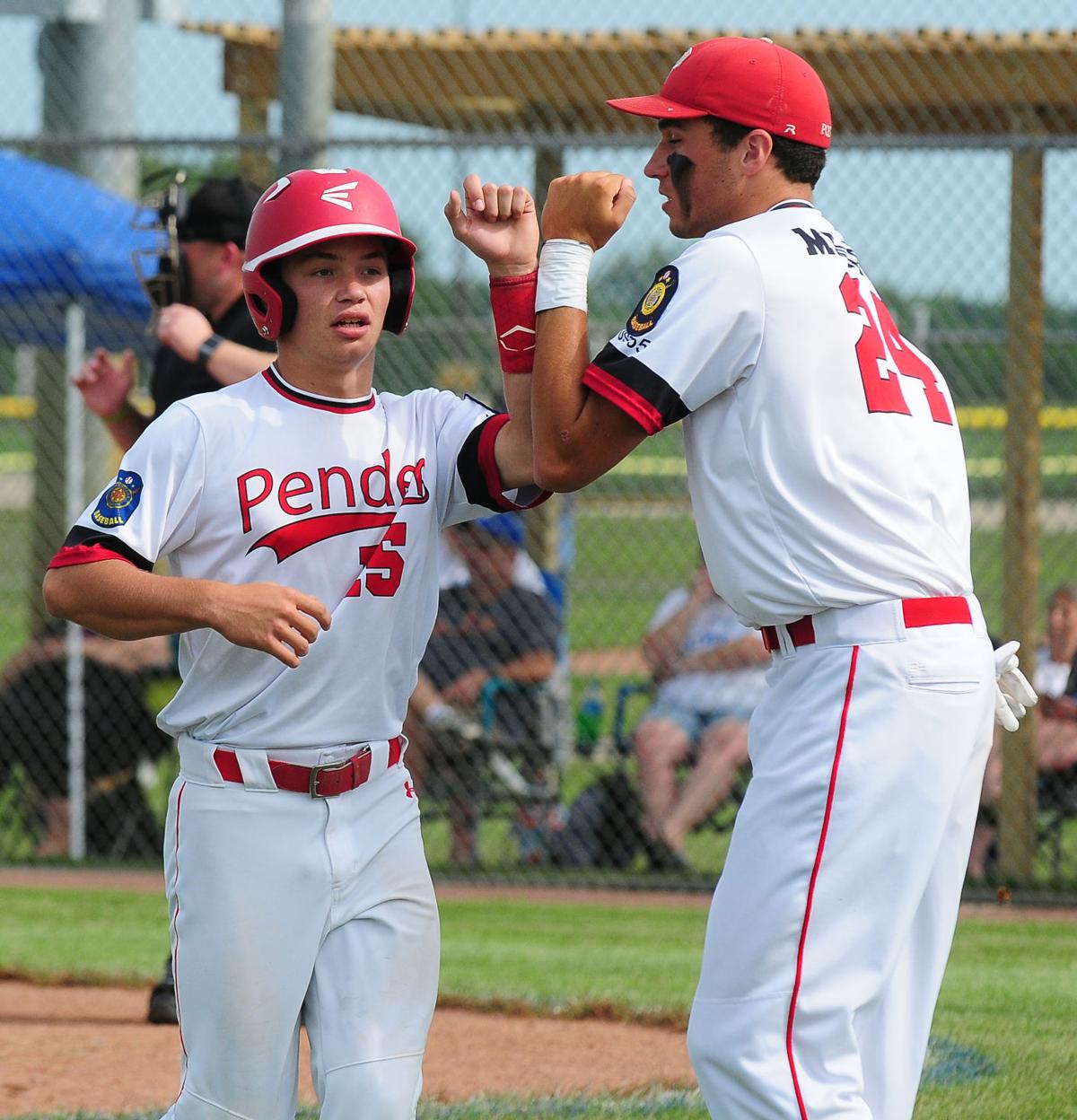 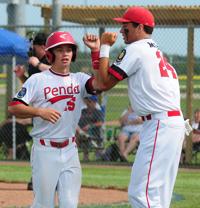 Lucas Vogt of Pender is congratulated by teammate Sam Mailloux after Vogt scored a run in the first inning of Tuesday's Class C American Legion Seniors state tournament game against Bruning-Davenport/Shickley in Syracuse.

Zach Hegge of Pender throws a pitch during the first inning of Tuesday's game against Bruning-Davenport/Shickley in the Class C American Legion Seniors state tournament in Syracuse.

Lucas Vogt of Pender is congratulated by teammate Sam Mailloux after Vogt scored a run in the first inning of Tuesday's Class C American Legion Seniors state tournament game against Bruning-Davenport/Shickley in Syracuse.

Zach Hegge delivered a complete-game one-hit shutout as Pender advanced to the final day of the Class C American Legion Seniors state baseball tournament with a 3-0 victory that took almost exactly one hour.

“He's had a little tired arm here in the last couple of weeks, so we intentionally haven't used him much, and he gave us a gem when we needed it today,” Haymart said.

The win put Pender into the final day of the tournament for the second straight season. Pender will face Dannebrog-Cairo-Boelus at 5 p.m. and would have to win twice to claim the Class C title.

“It means everything. That's what we've been going for all year,” Hegge said. “Now we've got to finish.”

That one hit allowed — a bloop single with two outs in the seventh inning — was one of the few blemishes for Hegge and a defense that was tagged with one error while also turning a crucial double-play in the fourth inning and retired BDS in order four times.

“It helps a lot because then I know I can trust my defense like that,” Hegge said. “I know I can throw strikes and the defense can do its part.”

The respect went both ways.

“He pitched an amazing game,” shortstop Will Gatzemeyer said.

The win wouldn't have happened without Gatzemeyer, either. He went 2 for 3 at the plate with all three RBIs with a one-out single in the first inning and a two-run single that capped a two-out rally in the second inning.

Two of those runs were scored by Lucas Vogt, while leadoff man Brady Oliver — who matched Gatzemeyer by going 2 for 3 — scored the only other run of the game. Pender totaled seven hits, five in the first two innings, which was an encouraging sign, Haymart said.

“We like seeing good pitchers, and Christiansen is one of the better pitchers we've seen,” Haymart said. “We had more hits tonight than we did in all of our area tournament games.”

Vogt got things going in the first when he reached second base on a throwing error, and Gatzemeyer's hard liner down the left side was enough for Vogt to race home standing up.

“I was not touching his curveball,” Gatzemeyer said. “I went up to the plate and thought, 'fastball, fastball.' I waited until he threw one and ripped it.”

The first inning could have been even bigger after Devin Hegge was hit by a pitch and Hunter Ferguson's textbook bunt down the third-base line loaded the bases. But Christiansen struck out the next two Pender batters to end the inning.

In the next inning, a two-out rally gave Pender all the cushion it needed. Oliver singled into shallow right field, then Vogt's hit landed just inside the chalked line past third base to put runners on second and third. Gatzemeyer took advantage with a liner to bring both across.

From there, it was all about the Pender defense.

BDS mounted its biggest threat in the fourth when an errant throw — the only error of the day for Pender — and a walk put two on with nobody out. Zach Hegge induced a 6-4-3 double play and a groundout took care of that threat.

“They got some runners on there, we were able to come through with a double play, made some good plays on defense, and Zach buckled down,” Haymart said. “It was good.”

Pender retired the next eight until a walk in the seventh. Two batters later, Peyton Dubbert had the only hit for BDS, a blooper just over the second baseman's head. A groundout finished the game.

Christiansen, who Haymart said was 12 for 13 in the tournament going into Tuesday's game, was neutralized at the plate. Pender intentionally walked him twice, the second time setting up the crucial double play, and Christiansen also grounded out.

“As bad as I felt about walking Christiansen, he's the best hitter we've seen this year, regardless of class,” Haymart said. “We weren't going to let him beat us.”

OMAHA — The Norfolk High football team traveled to Omaha, entering the game against the Omaha Benson Bunnies on a three-game losing streak in search of its first victory in September, which is what they found in the 24-0 win on Friday.

Mixed martial art fighter Jordan Heiderman of Norfolk will look to stay undefeated on Friday, Sept. 24, at the Menominee Nation Arena in Oshkosh, Wisconsin, when he will enter the octagon against Chad “Big Rig” Johnson.

Experience was a contributing factor in Norfolk High’s tennis dual win over Columbus on Thursday afternoon.

ALBION — About 20 years ago, Boone Central beat Pierce in the Class C1 state championship game. It was the Cardinals’ first year in existence following the consolidation of Albion and Petersburg high schools.

PIERCE — Class C No. 3 Pierce won for the ninth consecutive time on Thursday with a 26-24, 28-26, 25-8 victory over struggling Lutheran High Northeast at the Pierce High School gymnasium.

Sport shorts and scores for Sept. 21

It’s starting to feel more and more like football season. Each day you can feel the breeze getting cooler, which I can’t help but think will turn into freezing kickoff weather before we know it. Well, until then …

Do you think college football officials would improve if they were required to answer questions after games?