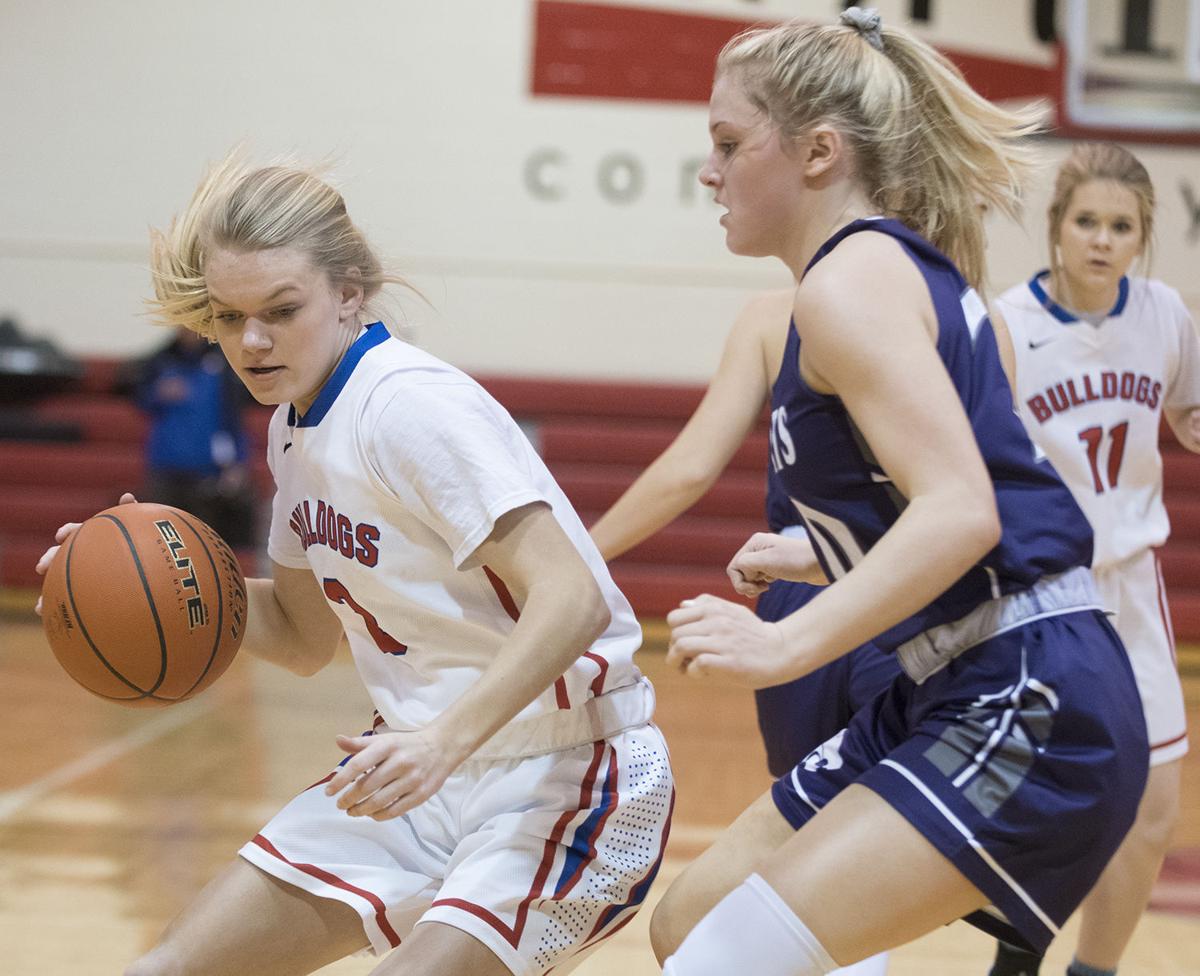 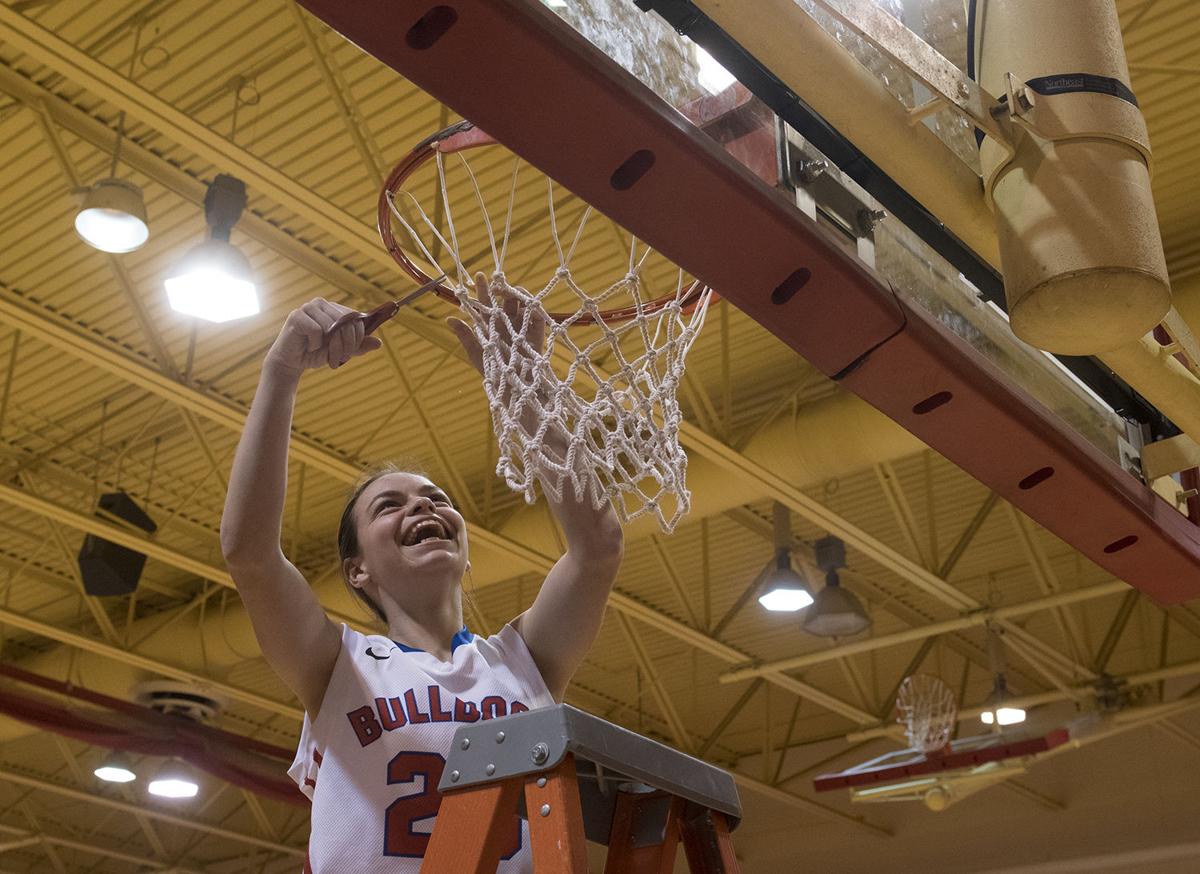 Daisy Korus of Humphrey/Lindsay Holy Family cuts down a piece of the net after Friday night's Class D1-5 district final against Hartington-Newcastle at Northeast Community College in Norfolk on Friday night. 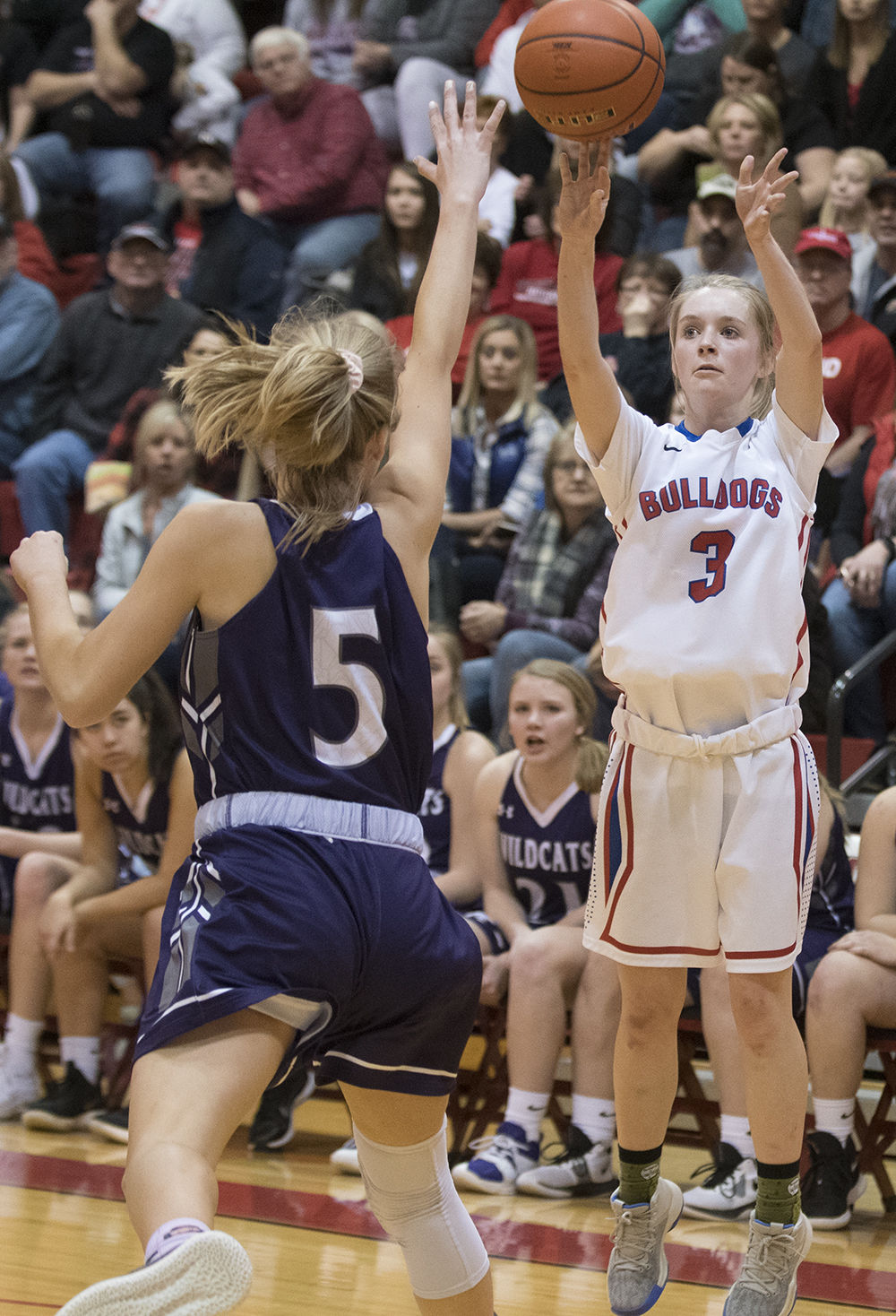 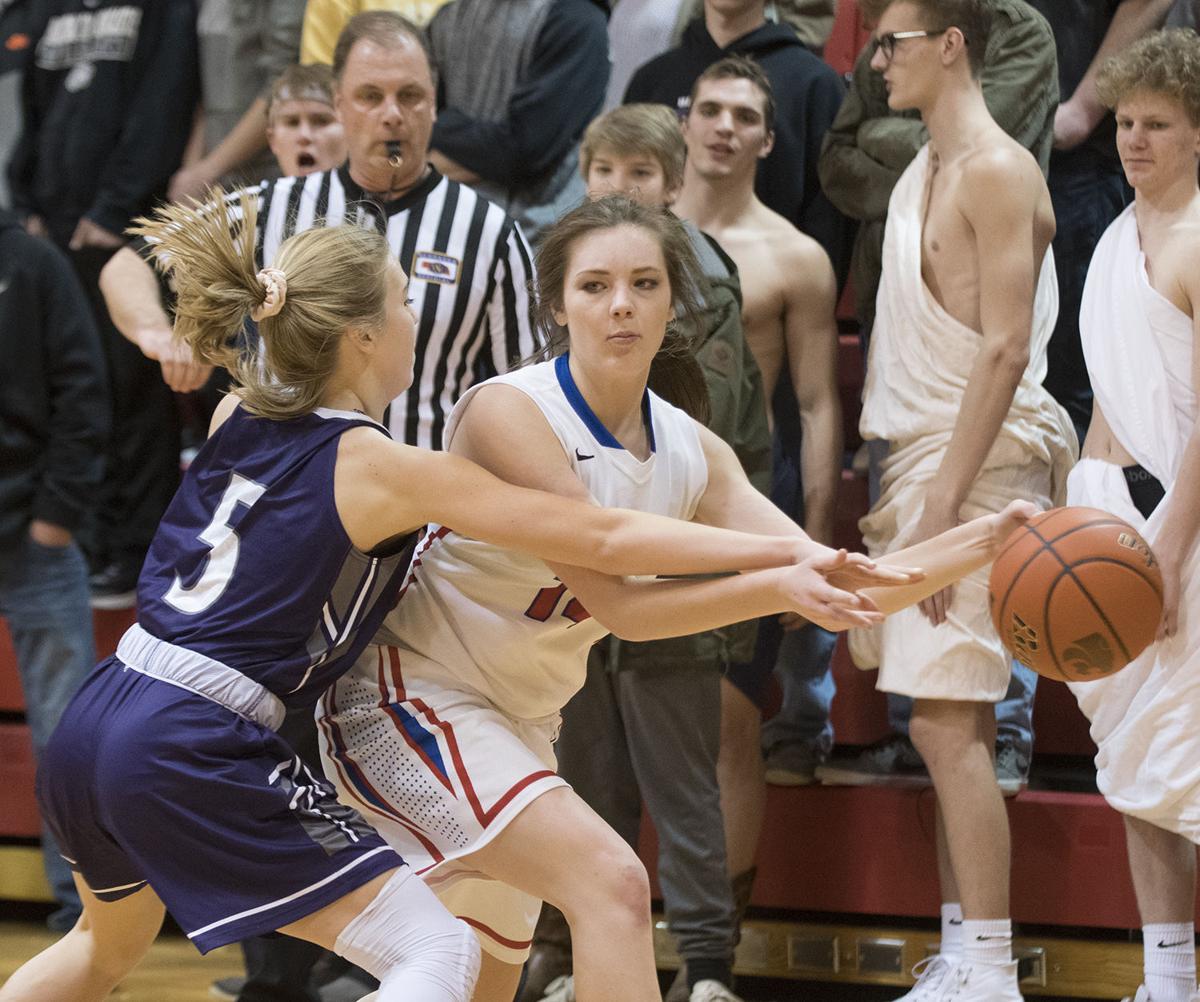 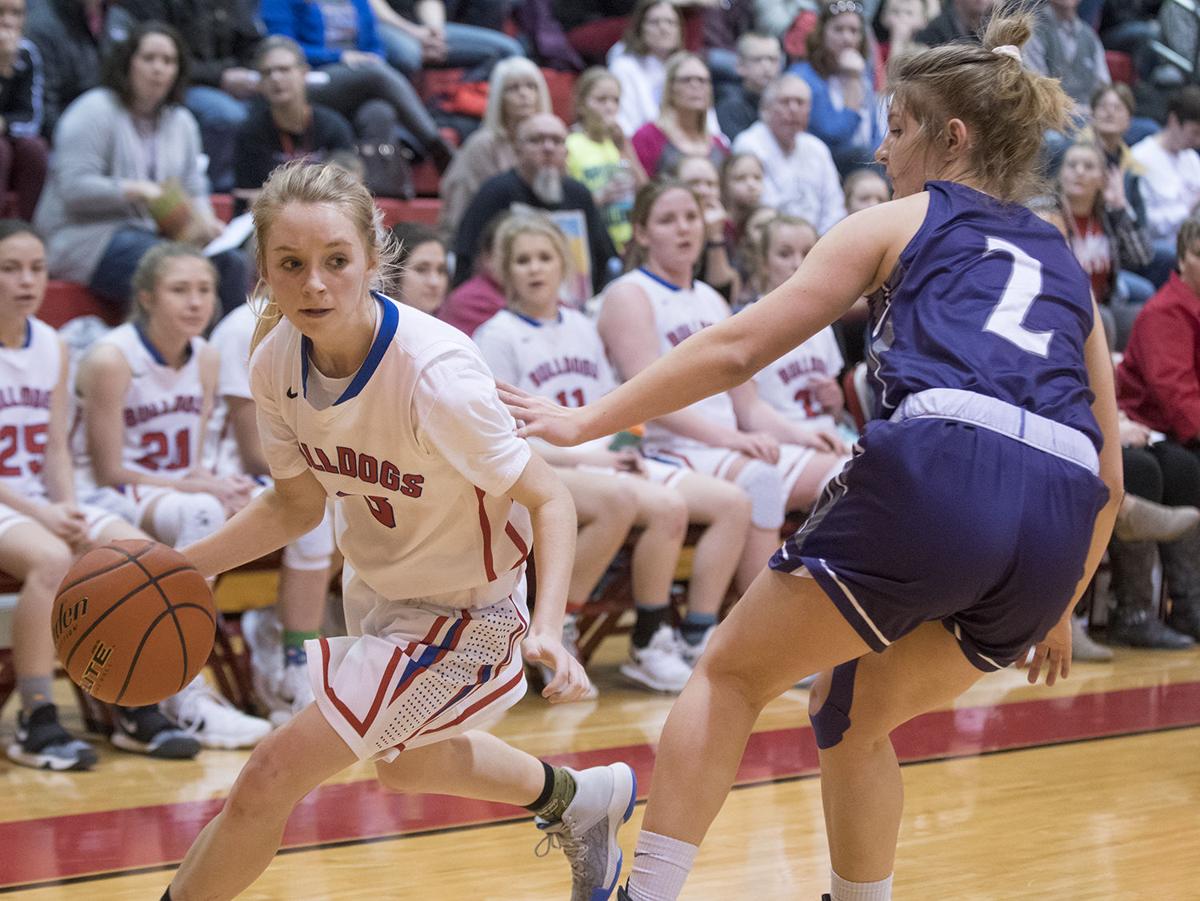 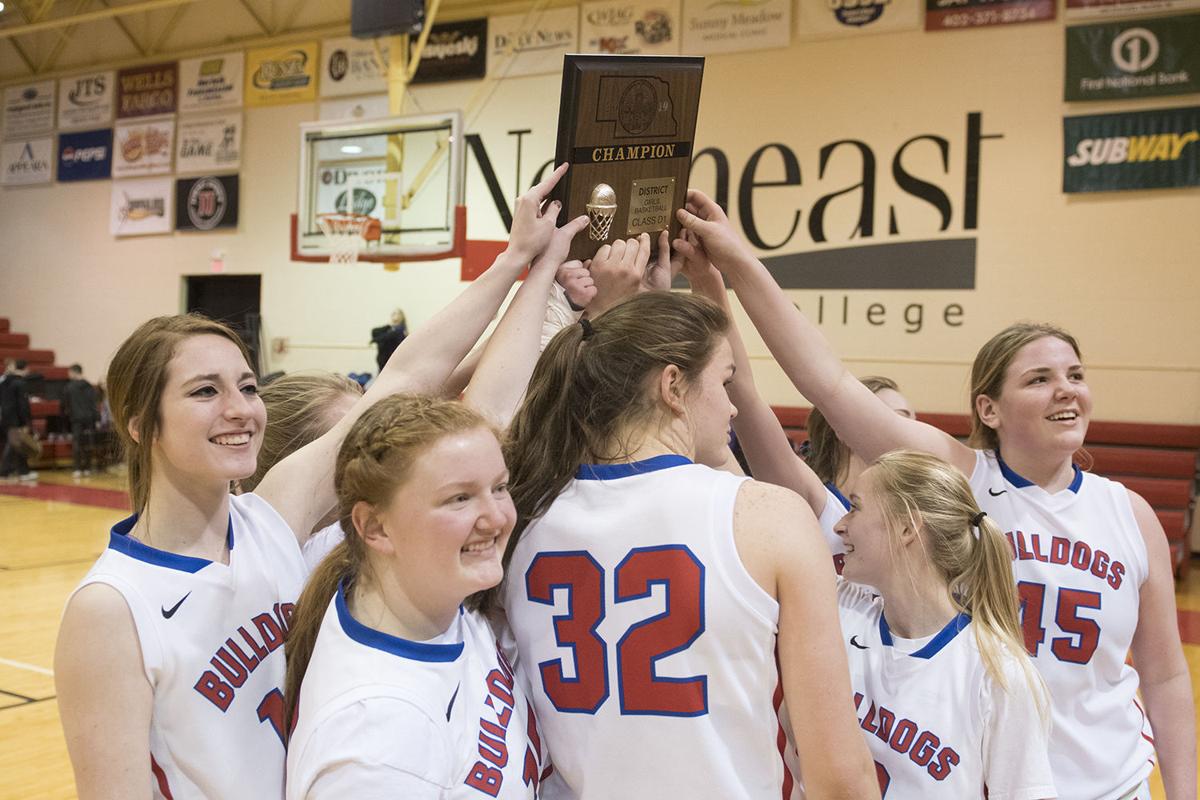 Daisy Korus of Humphrey/Lindsay Holy Family cuts down a piece of the net after Friday night's Class D1-5 district final against Hartington-Newcastle at Northeast Community College in Norfolk on Friday night.

Two scoring runs were all Humphrey/Lindsay Holy Family needed to punch its ticket to the Class D1 girls basketball state tournament for the second-straight season.

The fifth-seeded Bulldogs used a 12-3 run in the first half and a 14-2 start to the second half to build momentum, and then held off Hartington-Newcastle 53-43 in the Class D1-5 district final Friday afternoon at the Cox Activities Center in Norfolk.

“To get this one tonight is to get us to Lincoln, so that's why that one was important,” HLHF coach Kandee Hanzel said. “Last year, that left a bad taste in their mouths. ... Now, they're hungry.”

But the goal for the Bulldogs is not just getting to Lincoln — not after falling 67-64 to eventual champion North Central in the first round.

“Last year, we made it to state but lost in the first round,” HLHF point guard Brittney Veik said. “We just figure we have some unfinished business this year that we need to take care of.”

The 12th-seeded Wildcats battled back from a 45-24 deficit in the third quarter to pull within 47-39 with 3:26 remaining, but they could never get closer than eight points the rest of the way.

“Humphrey/Lindsay (Holy Family) is maybe as good as there is in our class, and I thought we competed with them as well as anybody will,” Hartington-Newcastle coach Corey Uldrich said.

The smallest player on the court, the 5-foot-4 Veik, turned out to be the biggest reason the Bulldogs advanced. She hit three first-half 3-pointers and finished 4 of 6 from deep on her way to a game-high 20 points. She was the only Bulldog in double figures but far from the only contributor.

“She was the MVP tonight,” Hanzel said. “She stepped up. She was ready to go.”

Six-foot-two senior Taya Beller recorded her 1,000th-career point during the contest, finishing with seven points, seven rebounds and three blocked shots despite missing much of the first half with two fouls.

“I wasn't worried,” Hanzel said. “Our freshman can come in, and she's been playing well.”

That’s a reference to 6-foot Addison Schneider, who scored six points in 55 seconds — first off two Allanah Beller assists, then a putback on a Taya Beller miss. Jessica Olmer also put back a Taya Beller miss down low for a 45-24 lead with 2:10 left in the third quarter.

Hartington-Newcastle began to chip away. The Wildcats cut the deficit down to single digits for the first time in the second half when Belle Harms, who had 11 points and five rebounds, scored off an Abbe Morten assist with 3:26 left in the game to make it 47-39 and cap a 9-0 start to the stanza. Morten also had 11 points to share the team lead with Harms.

“They're a resilient group,” Uldrich said. “We started running the floor a little bit and getting some easy looks.”

Allie Schneider, who had nine points and six rebounds, followed with two free throws with 2:27 left. Morten answered with a layup, and after a missed shot, Veik was fouled on the rebound and hit both ends of a one-and-one with 1:03 left. After the Wildcats missed again, Veik found Taya Beller down low for the final blow.

Hartington-Newcastle had the early momentum thanks to Willa Scoville, who hit three 3-pointers in giving the Wildcats an 11-7 lead with 2:37 to go in the first quarter.

“We got some open looks, she got her feet set, and the thing about her is she's a streaky shooter,” Uldrich said about Scoville. “When she gets going, it's one of those deals where every time she shoots it, it feels like it's going to go in.”

But Veik punctuated a 12-3 run to answer with a 3-pointer from the top of the key off an Addison Schneider assist to lead 19-14 with 4:26 left in the half. Humphrey/LHF went on to outscore Hartington-Newcastle 37-19 over the second and third quarters.

LINCOLN — The Nebraska School Activities Association (NSAA) announced late Thursday morning that all practices and competitions for the rest of the school year have been canceled due to the COVID-19 pandemic.

Winnebago and Omaha Nation are being included in the East Division of the expanding All-Nations Football League primarily for Native American high schools in the Central Plains. The league, which plays nine-man football as found elsewhere in its South Dakota base, will grow from 12 to 16 tea…

Nebraska volleyball had more fans attend matches in 2019 than any other program in the country, according to an attendance report released by the NCAA.

Virtual recruiting in all Division I and II collegiate sports will last at least two more months.

All NCAA Division I student-athletes who lost their spring seasons because of the coronavirus pandemic will have the option of a do-over.

Who was the greatest Nebraska football player of all time?