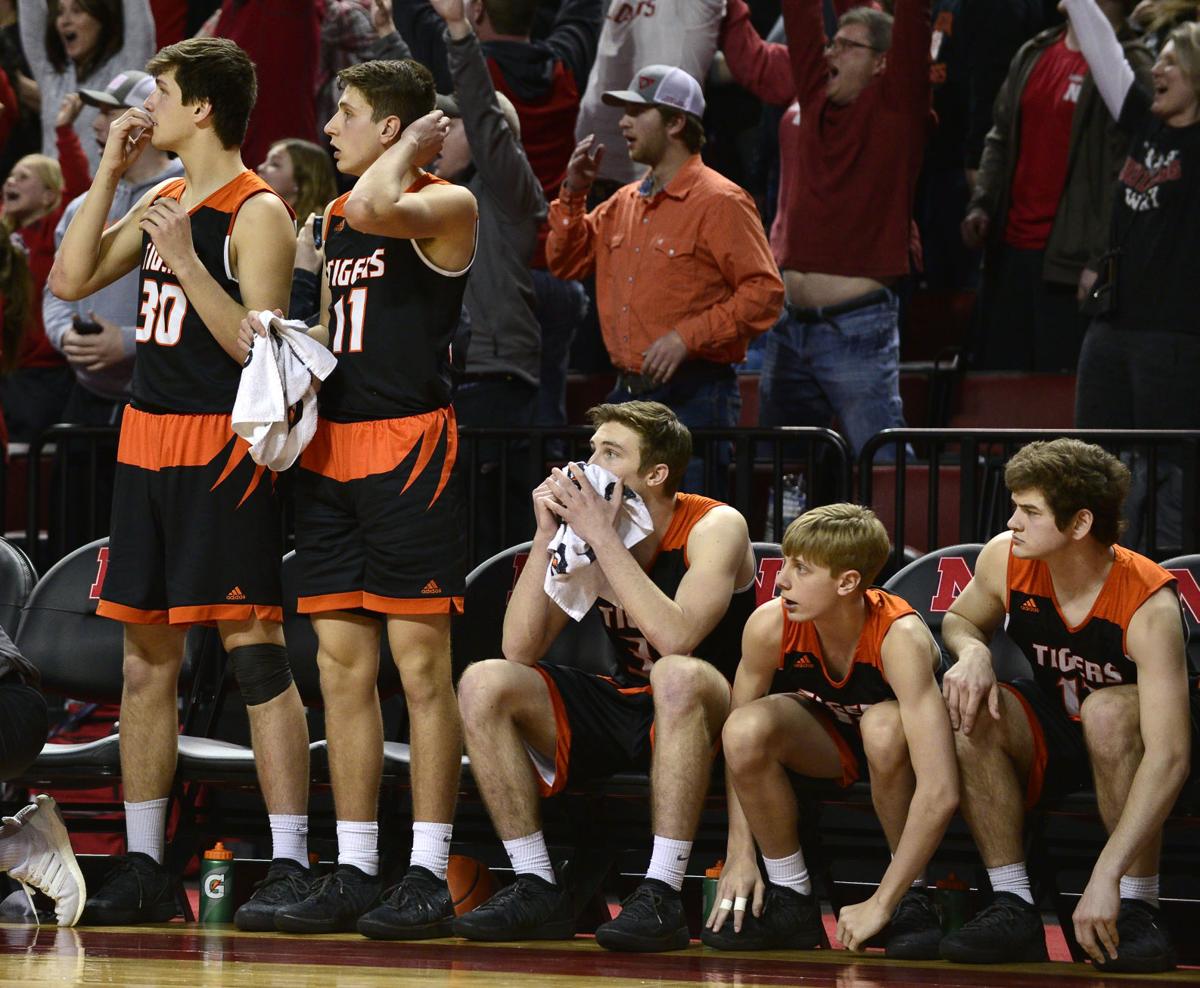 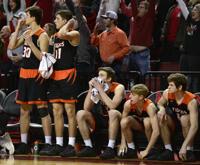 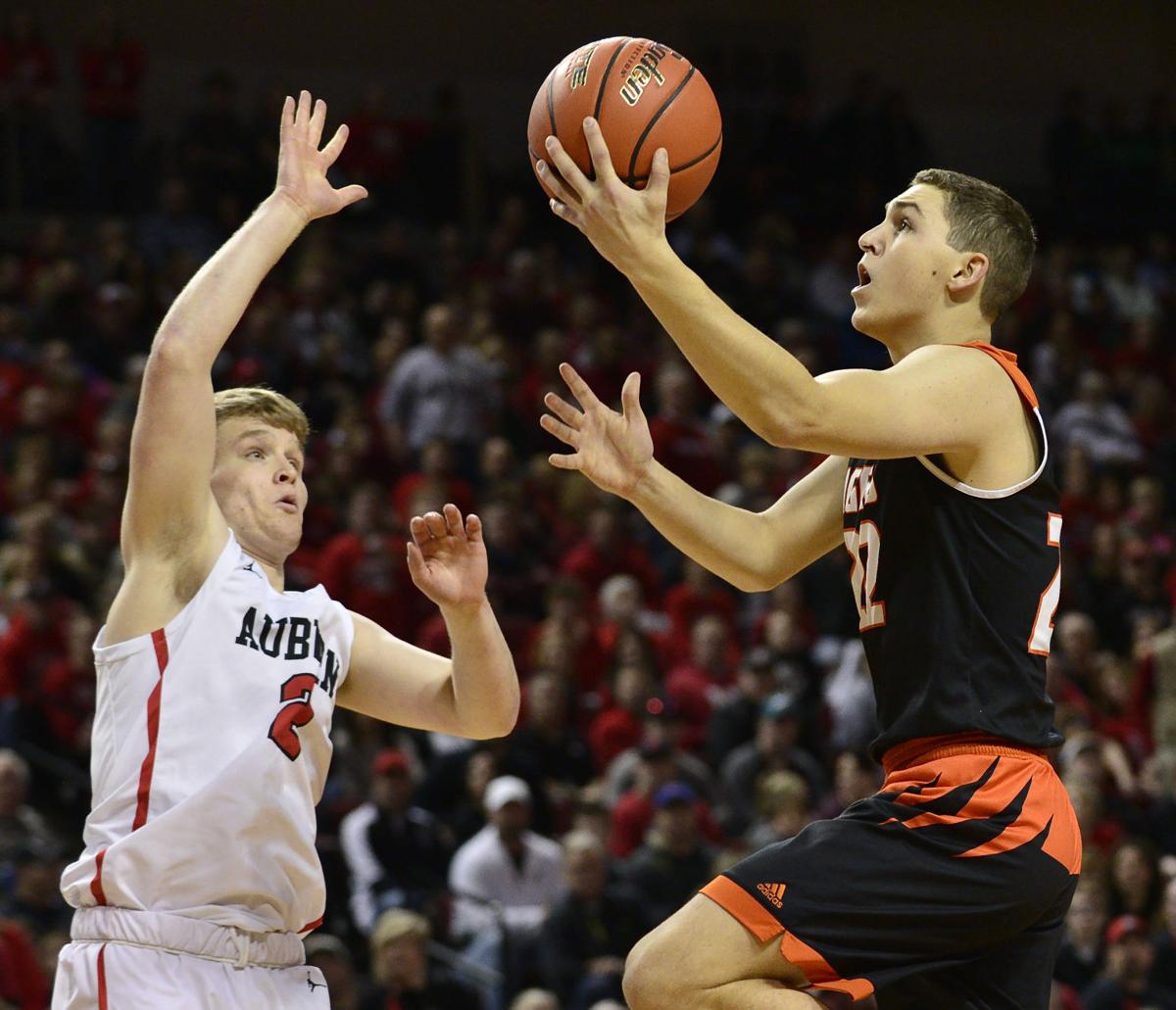 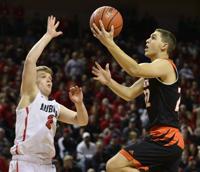 DARIN EPPERLY/DAILY NEWS LINCOLN -- Tanner Wietfeld of North Bend Central goes up for a shot as Cameron Binder (2) of Auburn defends during the Class C1 championship game on Saturday morning in Lincoln. 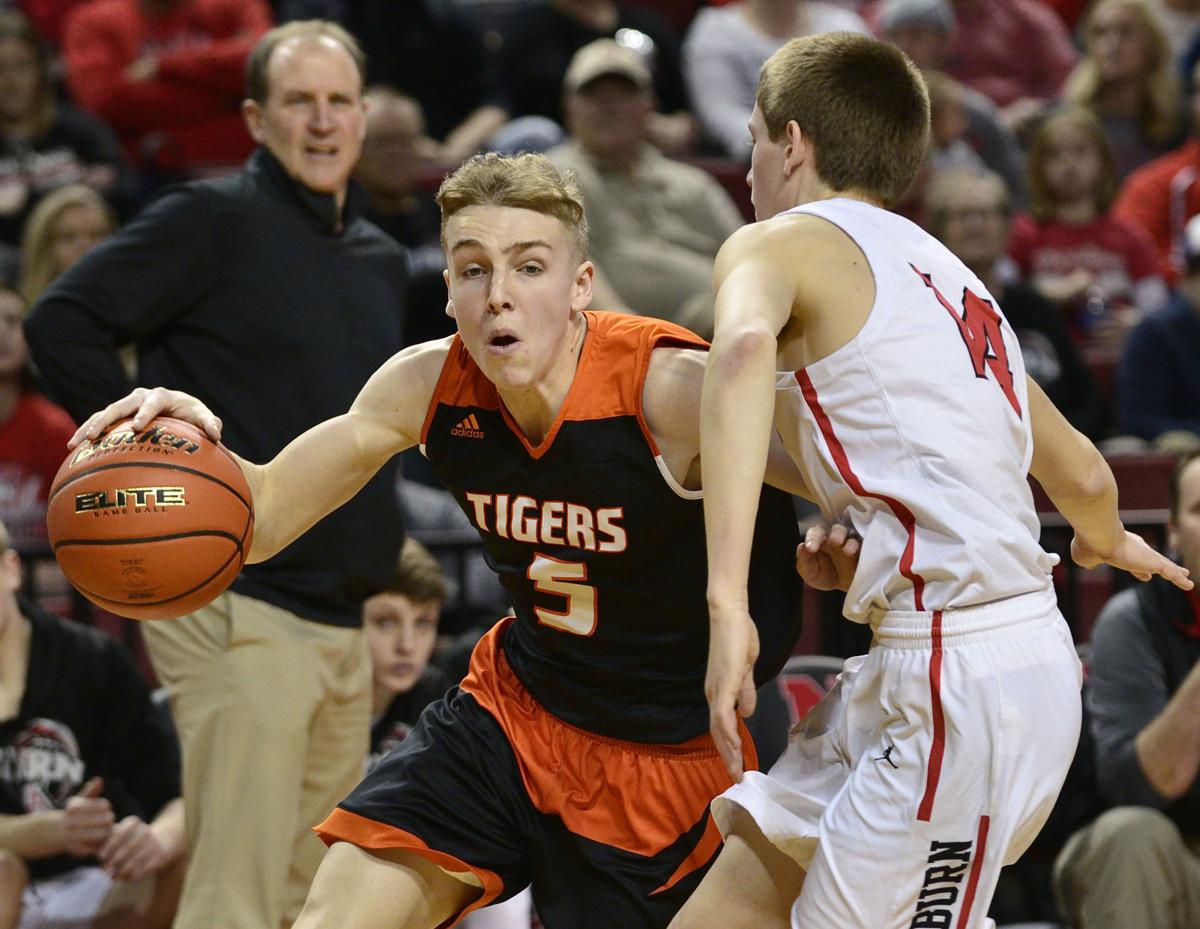 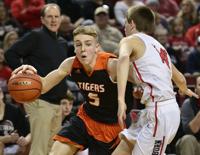 DARIN EPPERLY/DAILY NEWS LINCOLN -- Tanner Wietfeld of North Bend Central goes up for a shot as Cameron Binder (2) of Auburn defends during the Class C1 championship game on Saturday morning in Lincoln.

So when the Tigers finally took their first lead with 5 minutes, 22 seconds left, it seemed like the tide had finally turned.

The same was true when North Bend grabbed a 27-24 lead after an easy basket by John Emanuel off a Breckin Peters assist with 1:57 left.

And it certainly appeared that way when Peters scored a driving layup with 23 seconds left for a 29-27 lead.

What happened next nullified all of that momentum.

In a game where Auburn didn't hit a 3-pointer over the first 30 minutes — and both teams struggled mightily shooting — Cam Binder hit a step-back 3-pointer in front of his team's bench with 1.4 seconds left and the Bulldogs beat the Tigers 30-29.

It was the game few expected to be played at Pinnacle Bank Arena.

First, there was Auburn, which stunned a shorthanded second-seeded Wahoo team to begin Friday's semifinals. Then North Bend followed suit by controlling previously undefeated and top-seeded Ogallala from start to finish to end a 92-year stretch between championship game appearances. North Bend was in the finals for the first time since 1926.

It was a game for those who appreciated defense because the teams combined for 58 field-goal attempts. North Bend finished 11 of 33 (33.3 percent) from the field, including just 2 of 9 from 3-point range. Auburn hit 10 of 25 (40 percent).

Tanner Wietfeld led North Bend with eight points, while Jaxon Wietfeld added seven and John Emanuel had six. Binder had a game-high 14 for Auburn, and Josh Lambert had seven before he fouled out with more than three minutes left.

The Tigers never got to within a bucket of the Bulldogs until a Chase Ruzicka steal led to Austin Endorf finding Jaxon Wietfeld for a wide-open 3 with 6:23 left. A minute later, Endorf spun in the lane and found Rolenc for easy two for North Bend's first lead and the swings in momentum.

John Emanuel put the Tigers within a possession to end the first half, and he won a staring contest in the process.

Emanuel stared down Bret Baltensperger as he dribbled and drained the clock down to less than 10 seconds. He took a jab step one way, cut the other to break away from Baltensperger, and got himself open for a driving layup just before the buzzer for a 16-14 deficit at the break and also end a 4½ minute scoring drought.

It didn't look good early on. The Bulldogs started with a 12-2 lead after Cam Binder scored on two layups in a span of three possessions, the latter one of those coming with 1:19 left in the first quarter.

North Bend missed five of its first six shots and finished the first quarter 2 of 8 from the field. In comparison, Auburn was 5 of 10 from the field and scored 10 of its 12 first-quarter points in transition, including a pair of 3-point plays.

North Bend answered with its own transition offense. Jaxon Wietfeld dropped in a layup, and then he got a steal that led to a Ben Rolenc putback to put the Tigers within 12-10.

Auburn hit four straight free throws to maintain its lead for the rest of the first half but did not make a field goal in the entire second quarter.

Scores from around the area and across the state.

Wisconsin cancels visit to NU due to virus

The Nebraska football team will have to wait for its home opener this season.

HARTINGTON — Two teams literally divided by a street came together for a subdistrict final here Tuesday night at the Monsignor Werner Activity Center.

WYNOT — After a set, it looked like it would be smooth sailing for Wynot back to the district finals.

Top-ranked Lutheran High Northeast lost a first set for the first time this year but shook it off and rebounded for a convincing 17-25, 25-14, 25-11, 25-23 victory over No. 2 Norfolk Catholic in the final of the C2-6 subdistrict at Lutheran High's Andrews Activity Center.

Wisconsin may be facing the type of nightmare scenario that coaches feared as soon as the coronavirus pandemic arrived.

WYNOT — Wynot had to weather a flurry of comeback bids from a scrappy Winside squad to sweep its way back into the district final round Tuesday night.

Top ranked Lutheran High Northeast lost an opening set for the first time this year but turned the tide in the second and third on the way to a 17-25, 25-14, 25-11, 25-23 victory over No. 2 Norfolk Catholic in the final of the C2-6 subdistrict at Lutheran High's Andrews Activity Center.

Time Out: Powerhouse teams go down to the wire

Did the MLB, NBA and NHL championships lose their luster this year?