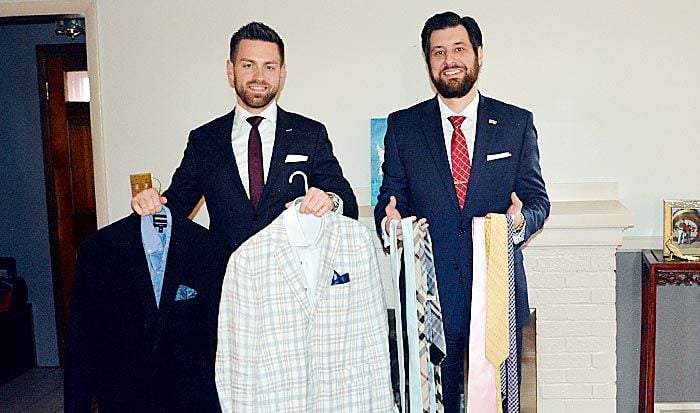 Chase R. Pflueger (left) who works in the financial services industry at Edward Jones in Norfolk, and Austen Hagood, a marketing officer at BankFirst in Norfolk, both agree on the right fit and style of suits. 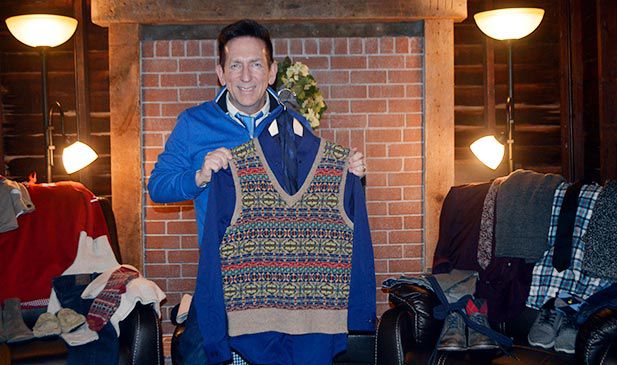 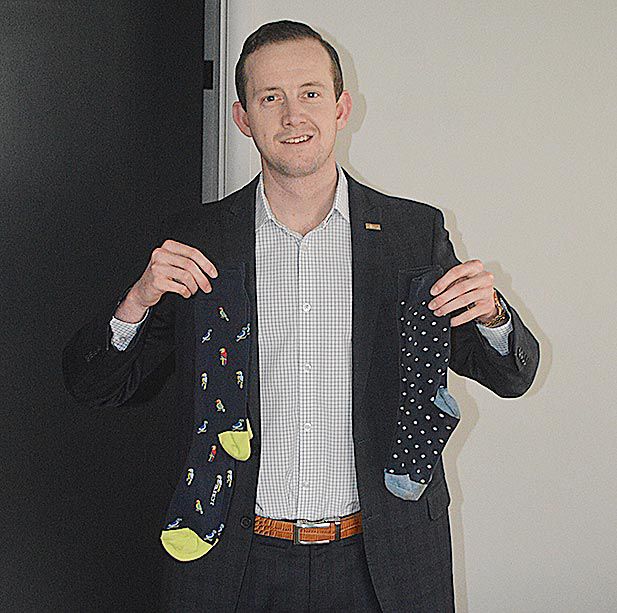 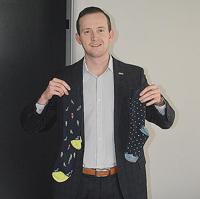 WILSON LONG, a loan officer at BankFirst in Norfolk, prefers to dress in suits with unique socks to look professional.

Chase R. Pflueger (left) who works in the financial services industry at Edward Jones in Norfolk, and Austen Hagood, a marketing officer at BankFirst in Norfolk, both agree on the right fit and style of suits.

WILSON LONG, a loan officer at BankFirst in Norfolk, prefers to dress in suits with unique socks to look professional.

Professionals around Northeast Nebraska have a wide range of individual styles, and they share their collections and explain what inspires them to wear such unique clothes.

And with many businesses shut down and workers at home because of the coronavirus pandemic, what better time to examine or clean out your closets. Here’s some advice from a few Norfolkans known for their style.

"Vintage is kind of my style,” said Stortvedt, the executive director of Oasis Counseling International in Norfolk. “When I buy something, I usually like the material a lot in it. So as styles change, I have things that are altered to be in style but fit me as well. I'll often have my jeans tailored so they are tapered. Taking a pair of jeans and having them altered is a fraction of the cost of buying a new pair and fitting you better."

Stortvedt has an estimated 60 ties, 10 bowties, eight sport coats, three different kinds of suits and he has more than 50 pairs of socks.

"You have to pick your inspiration piece of what you are putting together. If there is something I usually like, I usually try to brainstorm what I can fit around it. If it's a shirt, what shoes, tie and pants can go with it?" Stortvedt said.

Stortvedt has a special wardrobe, which ranges from his father’s and uncle’s ties to new clothing attire from J-Crew, Express, Gap and Von Maur.

"I'm all about taking something that maybe others don't find useful anymore and working with it so people can see the style in it," he said. "Patterns are in, so you have to look at what you are matching them with. It doesn't have to have the same pattern, but usually you want to be in the same color field."

Long, a loan officer at BankFirst in Norfolk, prefers to dress in suits to look professional.

"It shows a professional image," he said. "Business-wise, it makes sense to wear suits."

Long has nearly 25 ties, a dozen pairs of socks and 10 blazers, with his favorite including a royal blue label suit.

"I like the older style suit," Long said. "It's not really a retro style, but I like to wear something different."

Hagood, a marketing officer at BankFirst in Norfolk who has lived in Norfolk for the past seven years, said the price of a suit doesn't matter unless it is good quality and it fits.

"It's all in the fit. You could make the cheapest suit in the world look good," he said.

Hagood has 10 suits along with 15 sport coats, along with his favorite charcoal suit, which fits perfectly.

Hagood said the most important thing is the details because anyone can wear a suit.

"I don't really care about the brand in the suit unless it's a 100% woolen, which is a big thing for me," he said. "I'd rather pay less, have it tailored and have it fit perfectly."

Also, with jackets Hagood said it is important to have a professional pocket square.

"You can really bring a lot of personality out with the pocket squares," he said.

Hagood and Stortvedt support Sewing by Beth, a place to get clothes tailored in Norfolk, which is a place Hagood relies on for the majority, if not all, of his clothes.

"She's incredible. She tailors everything for me," he said. "She's fantastic and very affordable."

To add to Hagood's wardrobe, he has more than 30 ties and has eight pairs of dress shoes, including a pair of blue suede shoes.

An exception when it comes to the price of clothes is a good pair of shoes, Hagood said.

"If a pair of shoes fits good and it can get you through a Nebraska winter without it getting ruined, then it's a keeper," he said.

Something Hagood is known for is his cufflinks and watches.

Hagood get his cufflinks monogrammed and then he gets all of his watches at Wetzel and Truex Jewelers in Norfolk.

Hagood explained the importance of dressing to a person's profession, since he dresses in a suit and tie for work during the week from 8 a.m. to 5 p.m. But he also said, "no one is ever upset if you are ever overdressed or underdressed."

Pflueger, who works in the financial services industry at Edward Jones in Norfolk, spends a majority of the time in an office during the weeks, which reflects with what clothes he wears.

"I just pay attention to what I wear. I have a lot of respect for what I do and I want to dress accordingly," Pflueger said. "I usually spend my time with people or places that I think really highly of, then I usually dress apart."

Out of 12 blazers and the five suits Pflueger owns, he will go online, shop locally and will even look for different styles of clothes from around the world.

When asked what his favorite suit was, Pflueger said, "They are all my favorites, they're my children."

Along with his suits, Pflueger has more than 30 ties and five pairs of dress shoes, which includes two brown and two black pairs, with various loafers.

When it comes to clothes, Pflueger said if they fit, then they will work.

"Having a couple good watches is critical when dressing for success," he said.

Pflueger doesn't always pay attention to the brands, but he will stick with a certain piece of clothing or style if it is good quality and fits correctly.

Collins, an attorney at Jewell & Collins in Norfolk, grew up on a farm south of Meadow Grove, which is where he grew to wear nice attire as he dressed up every Sunday for church.

"I always liked to dress up. Nobody thought that was bad because it was expected to dress up when you went to church," he said.

Collins didn't become a farmer because he has never been good with physical labor, but when he went into law, he knew he was going to have to dress up five days a week.

"The dressing up never really changed, but it's a lot of work," he said. "People may not exactly dress to impress, but they dress to be respectful."

Collins doesn't care what the brand is, as he now owns about 20 suits, he has a couple hundred ties, 30 pairs of shoes and he has "too many socks."

"If I like it, then that’s all that matters," he said.

Basic rules to live by

— Have a black and brown set-up of shoes and belts.

— Pay attention to things that fit, especially with the right lengths in pants and sleeves.

— Get a tailor if something doesn't fit.

— Don't button all of the buttons on a coat. Only need to button one button, along with unbuttoning your coat when sitting down.

— People who match shoes with their belt. This goes along with color coordinating, but you do not need to match these two together.

— People who get a little too crazy with a pocket square in the jacket or if the pocket square color doesn't match the tie. These two things need to match.

— Only wear one watch, using multiple wristbands. Don't let the wristbands take the attention away from the watch.

— Do not wear a suit jacket as a blazer. It just doesn't look right, and it is something people will notice.

— Don't wear jeans with holes in them, especially to a formal event.

Cuming County puts forth proposal to get cash into business hands