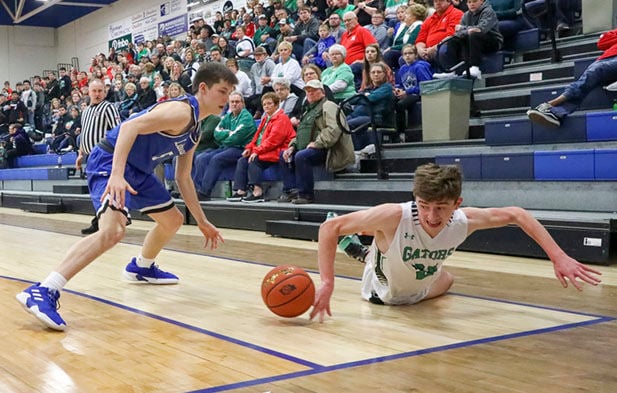 Andrea Beaudette/Correspondent Cort McKeown of LHNE and Cole Jacobsen go for the ball. 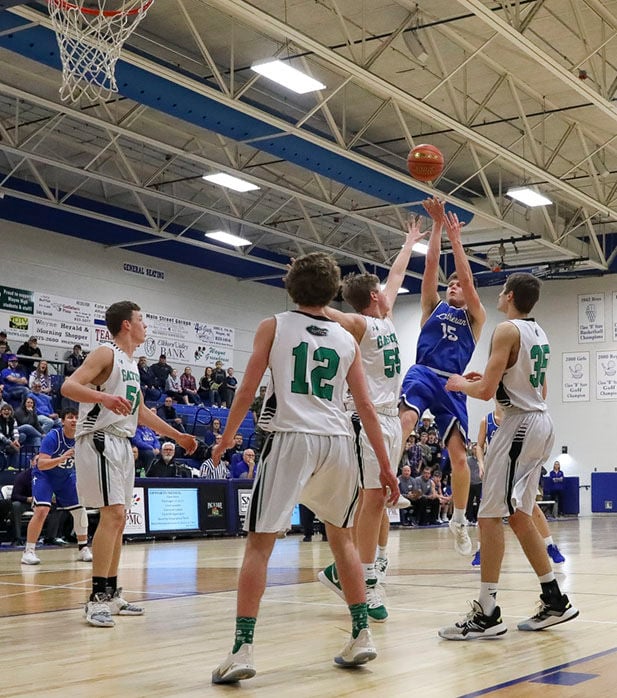 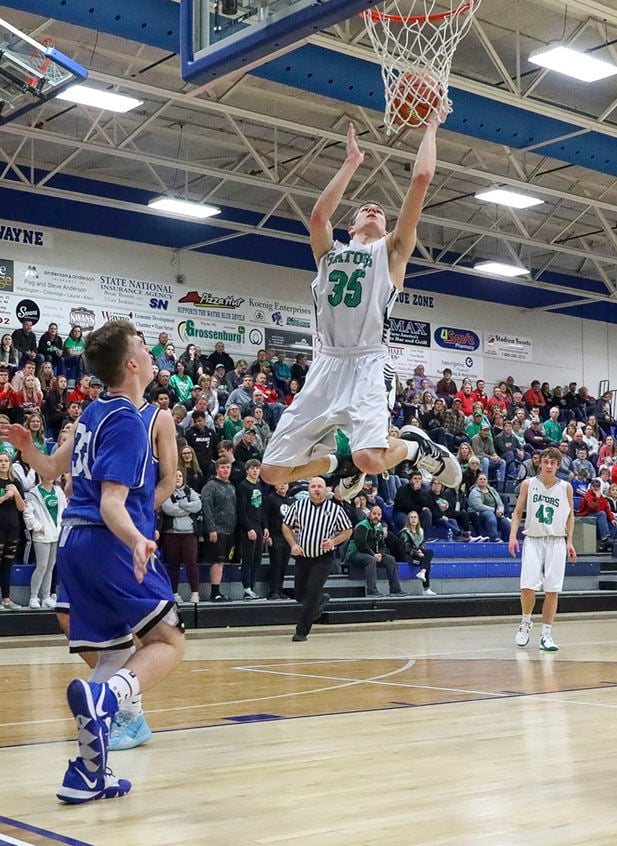 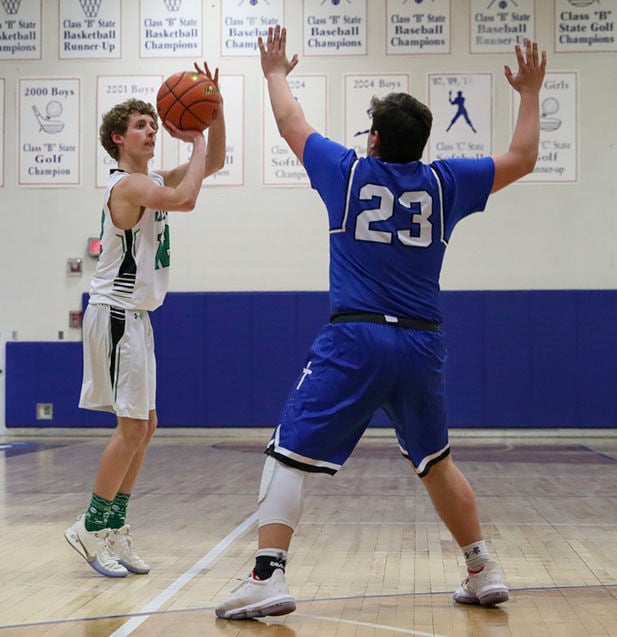 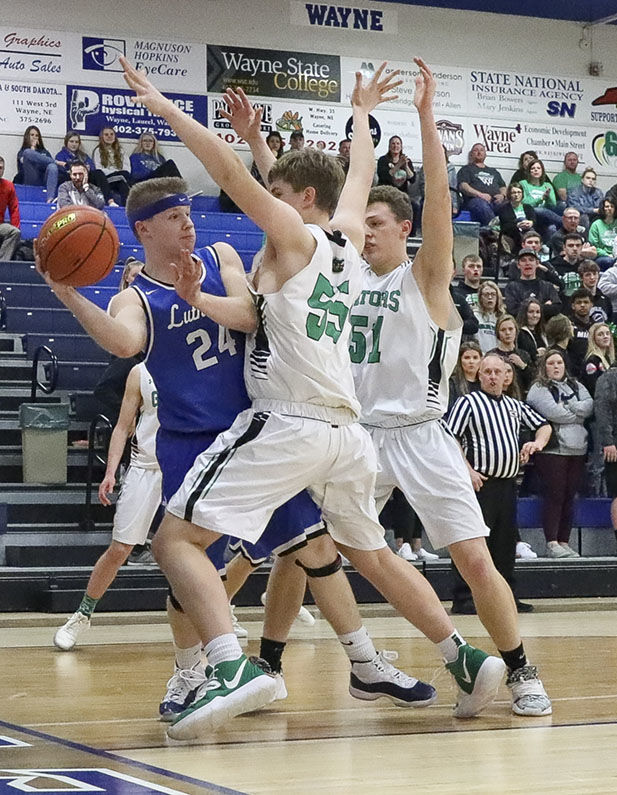 Andrea Beaudette/Correspondent Cort McKeown of LHNE and Cole Jacobsen go for the ball.

WAYNE — A 22-point fourth-quarter explosion allowed Wisner-Pilger to turn the tables on Lutheran High Northeast and earn a spot in Thursday’s subdistrict final against Hartington Cedar Catholic with a 53-45 win that was much closer than the final score would suggest.

Midway through the pivotal final period, the 16-9 Gators took advantage of three 3-pointers — two by Regan Bellar and another by Cole Jacobsen —to take a 42-41 lead, their first since a brief 8-7 advantage halfway through the first quarter that disappeared during a 14-0 Lutheran High run.

Moments later, the Gators found Colby Heller open at the elbow on consecutive possessions, and the senior took the ball hard to the basket for layups that produced a 47-43 lead with less than a minute and a half left to play.

“We thought we had the skip pass open if we could get the skip there, and we did a couple times to Regan. He’s a pretty good shooter when he’s open,” Gators coach Duane Mendlik said. “Colby does a nice job of getting the ball and taking it to the basket. They really didn’t deny him that, especially because they didn’t want to foul him and give him three.”

Although Jaxson Kant closed the deficit to 47-45 with a pair of free throws with a minute left, back-to-back offensive turnovers prevented the Eagles from altering the game’s outcome as Wisner-Pilger created the final 53-45 margin by making 4 of 4 free throws and adding a game-ending steal and dunk by Dylan Kneifl.

That ending seemed in doubt during the first period when Lutheran High made 8 of 10 field goal attempts, including three 3s, to forge a 20-8 lead.

“I thought Lutheran High came out and scored well early, a lot of 3s. We knew they were going to shoot a lot of 3s against our zone,” Mendlik said. “Down the stretch, we got a little quicker, and they seemed to pass the ball a lot more. I thought our kids really played well and stepped up in the fourth quarter.”

The Eagles also had changed from man-to-man defense to a 1-3-1 zone during that first period, which slowed the Gators’ offense.

But Bellar made a pair of 3s in the second, and Mendlik made a defensive change of his own from a 1-3-1 zone to a 2-3. As a result, Lutheran High produced just one field goal on 1 of 9 shooting, and Wisner-Pilger trimmed the deficit to 26-20 at the half.

“We play zone 99 percent of the time. I’m a big believer that shooting from 18 to 20 feet is harder than shooting from 2 foot,” Mendlik said. “So we stick with our zone, even though we almost went man at the end of the third quarter, but then we made a couple shots and it was down to a three- or four-point game. So we were still going to make them shoot from the outside.”

Both teams continued to play zone defense throughout the rest of the game, increasing the importance of each possession. Wisner-Pilger’s advantage came from the 3-point line, while Lutheran High looked for opportunities to work the ball inside.

“Getting them out of the 1-3-1 was the game plan, but their 2-3 made some passes tough. We weren’t really uncomfortable, but we couldn’t quite find the seam to get the ball into the high post to be able to attack,” Eagles coach Kenny Blank said. “When we did, they’ve got three kids that are 6-foot-2 so that caused some problems on some shots.”

Meanwhile, the Gators were successful on 18 of 40 shots (45 percent). Wisner-Pilger made 7 of 22 3-point attempts. Bellar made five of those and finished with 17 points, while Kneifl contributed 13 points and Heller 10.

“Credit goes to that kid for having the guts to take those shots and hitting them,” Blank said. “If he misses those, they probably get a little bit tighter because we’ve got the lead. We run out 45 seconds on a possession, and that’s the difference in the game.”

Lutheran High, which ends its season at 13-10, graduates five seniors.

“I told them I appreciated them allowing me to be their coach this year, being a new coach and having that many seniors,” Blank said. “It’s been a great run with those kids, with five great seniors. We’re going to miss them.”