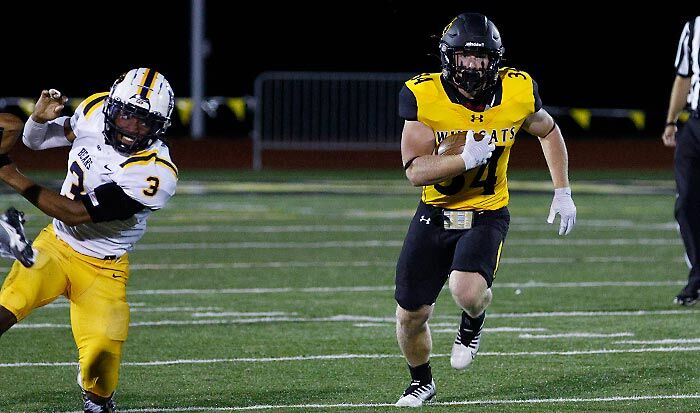 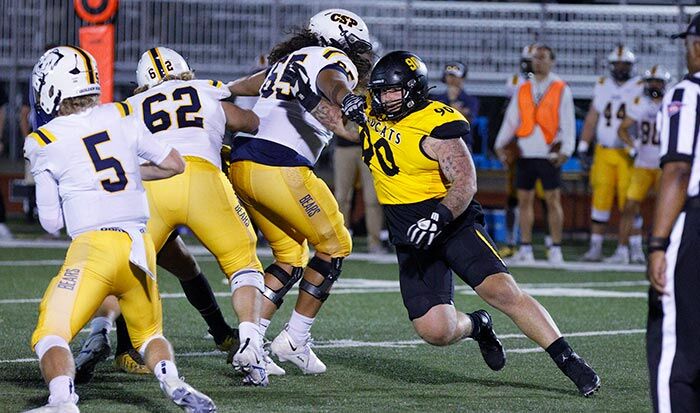 Wayne State made the most of its family weekend and the Wildcats led from start to finish in a game that moved them to 4-0 for the first time in nearly 30 years in front of nearly 2,000 fans by soundly defeating Concordia-St. Paul 48-21.

"This has been a great ride so far," Masters said. "We just need to keep it going and add to what we have done. We are far from finished."

The Wildcats used a chaotic defense and a balanced offensive attack to silence the visiting Golden Bears.

Anthony Watkins opened the scoring for Wayne State and the game with a 1-yard blast that capped off an 11-play, 77-yard drive after the teams traded possessions in the first 15 minutes.

With 4 minutes, 35 seconds left in the quarter and after an Alex Powders kick, the Wildcats were up 7-0.

Quarterback Nick Bohn, who finished with three touchdown tosses, then connected with Gage Dengel from 35 yards out to make it 14-0 early in the second quarter.

After the Golden Bears answered to make it 14-7, Wayne State reeled off 20 unanswered points before the half.

"We really got things going in that stretch," Masters said. "It was important we answered their score, and we did."

A Bohn scramble from 8 yards away was sandwiched by a couple of scoring passes, one to Jadon Johnson from 55 yards and the last to Shane Orr from the 12 with seven seconds left before the intermission.

On the defensive side, Wayne State held Concordia-St. Paul to under 100 yards rushing and 138 yards through the air and registered a couple of sacks.

"The coaches tell us to just fly to the ball and cause chaos," linebacker Jaylan Scott said. "They really come up with good schemes for us to stop the opponents, and we just go out there and have fun."

Scott had one of the sacks and came to Wayne State as a wide receiver.

"They moved me to the defense, and I love it," Scott said. "That's the thing about this team; we care about each other, and we just want to win. We're all brothers."

"We have great chemistry," said Becker, a sophomore defensive lineman who graduated from Hartington Cedar Catholic. "The culture around here is very close. We all care about the other guy, and we all want to win. We're glad where we are, but we have bigger things to accomplish."

The second half saw the Wildcats stay relatively close to the ground and take control of the game.

"I basically just took the pitch and followed my guys," Keiser said. "Our guys really did a great job, I just had to run."

To be fair, the redshirt freshman and Hartington Cedar Catholic graduate did make a couple of tacklers miss.

The Wildcats will hit the road for their Northern Sun Conference South Division opener when they will go to Winona State in Minnesota for a 1 p.m. kickoff on Saturday, Oct. 1.

"We're very excited to be 4-0, but we have bigger goals to achieve," Masters said. "We can't look ahead too far. We'll take it one practice, one day and one game at a time."

O’NEILL — If the first weekend of the high school wrestling season is any indication of what lies ahead, it should be a wild 2½ months.

STANTON — A Norfolk man will spend at least the next 14 months incarcerated as the result of a sequence of crimes he committed in southern Stanton County last spring.

From the outside, it’s easy to overlook the “traveling” aspect of traveling play productions, but for one-act teams — high school theater performances that max out at 30 minutes in length and compete against other plays — intense logistical planning is all part of the fun.

I’m sure we all remember the initial COVID-19 quarantine back during the once seemingly innocent spring of 2020. It was a mess. Businesses went bankrupt, toilet paper was a rare commodity and, most importantly, millions of lives were lost. However, we also must not forget the giant toll COVI…

WAYNE — The Wayne State men’s and women's basketball teams had a successful Saturday, turning back Southwest Minnesota State University back-to-back to open a conference slate at home, with the men taking an 83-62 win and the women coming away with a 72-62 win to improve to 7-2 and 6-1, resp…

The Norfolk High wrestling team now knows exactly how far it has to go over the next 2½ months.

Steady progress continues to be made on the Johnson Park and riverfront improvement project in Norfolk. On Friday, city officials provided a detailed update on where the project stands now and what citizens can expect to see in the coming months.

The holidays are a busy time of year, but taking time to make memories together is an invaluable gift. What better way to create memories than by being creative together? To that end, the Norfolk Arts Center has December activities for the entire family to enjoy.

What temperature do you usually keep your thermostat during winter?