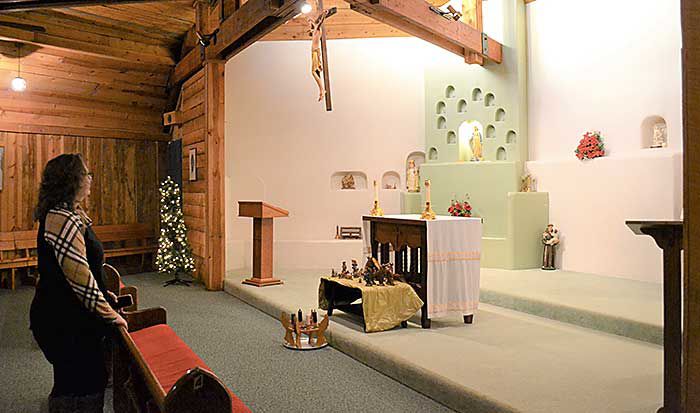 TINTERN’S MANAGER, Cheryl Veik, looks out at the altar of the chapel, which was attached to the barn and guest wing in 1990. 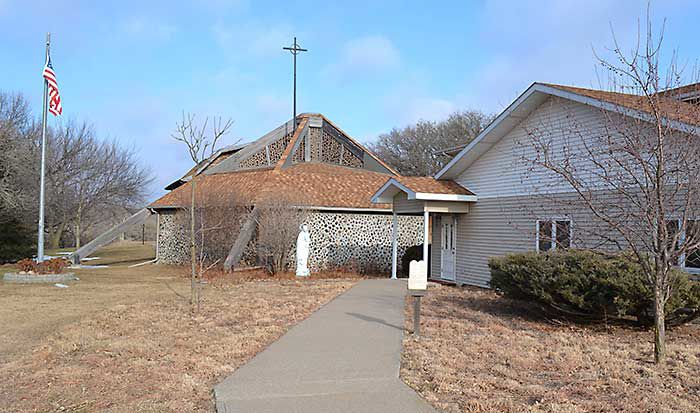 TINTERN’S MAIN BUILDING (right) is attached to the center's chapel and barn (left). The barn was built in 1984, and final additions to the facility were completed in 2001. 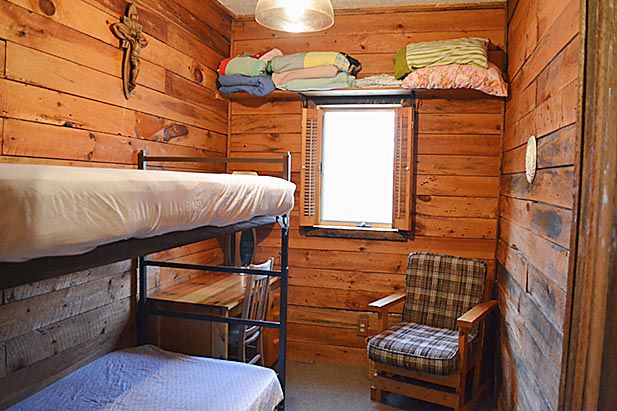 THE BARN, which is attached to the chapel and the main building, has several bedrooms. There is also a priest's quarter and what used to be the "cook's room." 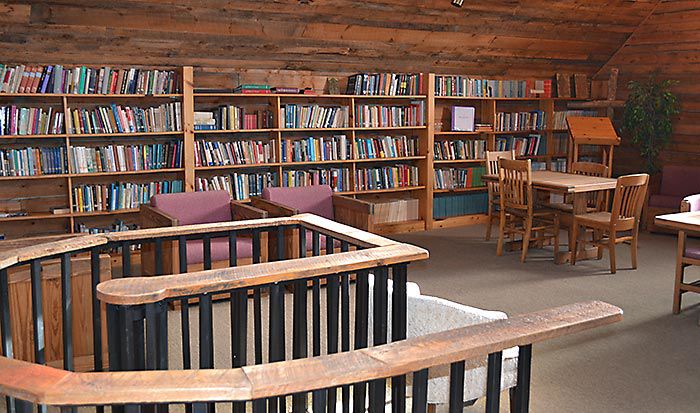 IN THE UPSTAIRS portion of the barn, which was the original building at the retreat, is a library and space for groups to meet. Downstairs, there are separate bedrooms and an additional kitchen.

TINTERN’S MANAGER, Cheryl Veik, looks out at the altar of the chapel, which was attached to the barn and guest wing in 1990.

TINTERN’S MAIN BUILDING (right) is attached to the center's chapel and barn (left). The barn was built in 1984, and final additions to the facility were completed in 2001.

THE BARN, which is attached to the chapel and the main building, has several bedrooms. There is also a priest's quarter and what used to be the "cook's room."

IN THE UPSTAIRS portion of the barn, which was the original building at the retreat, is a library and space for groups to meet. Downstairs, there are separate bedrooms and an additional kitchen.

Visiting the Tintern Retreat and Resource Center is like stepping into a different world.

A winding dirt road leads up to a grassy clearing where visitors can find peace and healing while secluded from the rest of the Northeast Nebraska community.

Cheryl Veik of Elgin has been the center’s manager for two years. She loves how Tintern, which is south of Oakdale, is on its own, she said.

“My favorite part is that I get to come out here to the peace and quiet and I get to absorb this every day, any time I want,” Veik said. “I like going into the chapel any time I want. You don’t have other people around, you just enjoy it.”

Veik became the manager after making the difficult decision to leave her job as an assistant artist with Baker Street studio in Neligh.

Now, she is the sole caretaker of the 30-acre property and center, which offers a place for youth groups to participate in multi-day retreats and private parties to get away from their own busy lives for a little while.

The main building is mostly used for youth retreats, Veik said. Upstairs are two male and female dorms with 100 beds total, a place for late-night conversations and fits of rowdy laughter. Downstairs is a conference room, dining room and large kitchen. A hallway in the back leads to the barn.

“A lot has been discussed around this table,” Veik said, looking down fondly at its scuffed metal top in the sunny kitchen. “I tell you, kids love sitting around this to talk. You can tell it’s been well-worn.”

Visitors also may stay in one of the barn’s rustic bedrooms and walk up a winding stairway to a library, which is filled floor-to-ceiling with books. They often wander to a single window and kneeling bench to look out at a large cross, standing stark in a rolling meadow behind the center, Veik said. It’s a popular place to contemplate and pray.

A long hallway below the library leads to a cozy chapel where a lot of youth group masses take place.

A place for schools, community youth

Tintern’s first youth retreat was with Hartington’s Holy Trinity Catholic Church in 1997. It then evolved to include school groups from around Northeast Nebraska including Norfolk, Columbus and Elgin, to name a few.

Schools will offer weeklong or weekend retreats for students, who will pay a fee to go. The hosting school also will provide transportation to Tintern and its own staff, clergy, food and scheduled activities for the retreat. Veik makes sure the facilities are ready for visitors, she said.

The overnight retreats usually occur in the summer. Students will participate in adoration and bonding activities; sports in the center’s Gaga pit, volleyball court or baseball field; and masses in the center’s chapel. It’s mostly grades 9-12, but Veik recently started a girls and boys grades 4-6 summer retreat to include younger ages.

“Some schools will bring middle grades out just for a day,” Veik said. “I even had a wrestling team come out just for a day, just to have the place to themselves. The majority are Catholic retreats, but we welcome any faith. They have activities and a lot of (personal) things come out, how they’re feeling and stuff like that. I don’t know the details, but in just observing, it’s pretty special.”

The summer is filled almost back-to-back with youth retreats, some from schools and church organizations, like the Quest church group from Columbus. Chelsea Preister, an organizer for the Quest youth retreats, first went to Tintern herself as a sophomore in high school.

Preister fell in love with Tintern at her first visit, she said. Students become friends and share their struggles together throughout the weeklong retreats.

“Many, many tears have fallen on the ground of Tintern,” Preister said. “Hearts are cleansed as they feel the emotions of the pain that has happened in their lives. Your body just feels so much lighter releasing that pain to God. Everyone is open with their feelings, and because of that, it’s easy not to judge people out there. It’s easy to show love. When the retreat is over, people don’t want to leave.”

It started with one man’s dream

The Tintern Retreat and Resource Center was originally built in the 1980s to become a monastery. The Rev. Clifford Stevens, a Boys Town graduate and mentee of Father Edward Flanagan, had dreamed of creating a monastery for decades, according to a previous Daily News article.

Throughout his life, Stevens was looking for the right property to construct a monastery, according to Tintern’s history.

While he was in his late 70s, he discovered and purchased the Tintern property. In 1984, the barn was completed. The chapel and guest bedrooms were finished in 1990.

In 1991, Stevens was diagnosed with a life-threatening illness and left the monastery. A Catholic group from Singapore known as the Patrists moved in, constructed a two-story addition and left in 1994. Stevens returned to Tintern in 1995 and eventually sold everything.

A group of investors bought Tintern in 1997 with hopes of making it an interfaith retreat center, specifically for youth groups. A separate group of investors became owners in 1998 and they now make up a board of directors that oversees Veik and the center. Final additions were made to the main building in 2001.

Schools, church organizations and private visitors pay a fee to stay at and use Tintern, and those funds mostly support the center, Veik said. But she still relies on donations and support from the community.

“If I have a need, I put it on social media and one way or another it gets around and things happen,” Veik said. “You find out how good people are, especially when it comes to Tintern. The towns that the groups come from, and Elgin, are wonderful. There’s a lot of support.”

The next project Veik is working on is to build a carport outside of the center’s main building for outside mass and events. A GoFundMe page has been set up on Tintern’s Facebook page and Veik is still accepting donations, she said.

The retreat and resource center also hosts a fall fund drive and will host a soup luncheon from 10:30 a.m. to 1:30 p.m. on March 15. Anyone is welcome, and the event is free-will donation.

For Preister, coming to Tintern three times a year for retreats is like coming home, she said.

“Tintern is a safe place ... lives are changed there,” Preister said. “Hearts are healed. Faith is strengthened. Just pulling into the driveway, I feel instant peace. It feels amazing to get away from the rest of the world and spend time with Him without distractions ... everyone is adoring God as a community, but they are also adoring Him privately in their hearts. It’s a beautiful sight to see.”

COLUMN: Injuries have not slowed down Guardian Angels

Next girl up. That's the philosophy for West Point Guardian Angels Central Catholic as the Bluejays finish off one victory after another.

Who's reading these days?

When you think of a reader, what kind of person do you picture? Are they young or old, studying or reading for fun? It turns out that readers span all generations and they read for different reasons at different stages of their lives.

3 … 2 … 1! Happy New Year! New Year’s Eve is celebrated around the world. The start of a brand new year has reached us, and this year, a brand new decade, too. With a new year comes a little something called New Year’s resolutions.

Trying not to procrastinate

At the beginning of the New Year, we hear everybody talking about New Year’s resolutions, and this year was no different.

Do people stick to their resolutions in the new year?