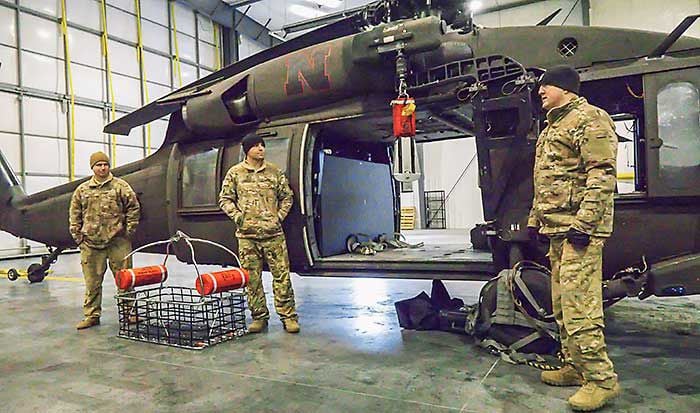 Crew members of the Blackhawk talk about equipment that was used to rescue people durning the floods of 2019. Some of the crew members have ties to Norfolk. (Far left) is Norfolk Catholic graduate and former Norfolk Fire Reserve Nathan Dooley and Bryce Hinrichs (middle) is a full time Firemedic with Norfolk Fire and Rescue. 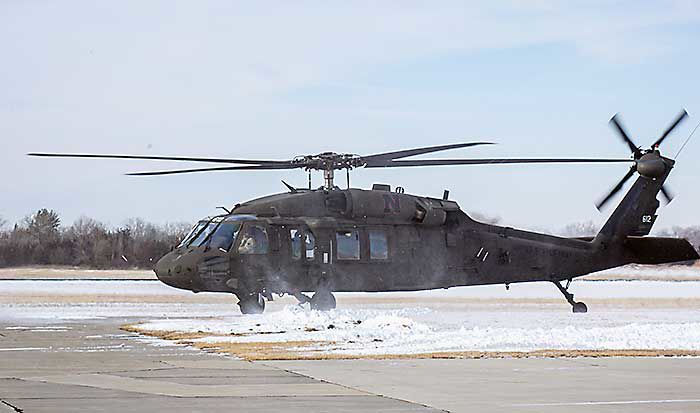 A Blackhawk helicopter from the Nebraska Army National Guard in Lincoln lands at the Norfolk Regional Airport on Thursday afternoon.

Crew members of the Blackhawk talk about equipment that was used to rescue people durning the floods of 2019. Some of the crew members have ties to Norfolk. (Far left) is Norfolk Catholic graduate and former Norfolk Fire Reserve Nathan Dooley and Bryce Hinrichs (middle) is a full time Firemedic with Norfolk Fire and Rescue.

A Blackhawk helicopter from the Nebraska Army National Guard in Lincoln lands at the Norfolk Regional Airport on Thursday afternoon.

On Thursday afternoon, a four-member Nebraska Army National Guard crew flew the more than 14,000-pound helicopter from Lincoln to the Norfolk Regional Airport in about 45 minutes.

At the airport, the massive two-engine helicopter was towed into a hangar where the crew spent more than an hour answering questions from firefighters and other rescue personnel to learn more about its capabilities.

More than 50 people representing at least eight fire departments, including the Norfolk Fire Division, attended the training. Also on hand were at least three emergency managers.

They learned that crews are always available to assist all over the state, depending on the need.

Hinrichs also is a member of the Norfolk Fire Division and helped to arrange for the Blackhawk’s trip to Norfolk.

“We created a water rescue committee for the fire department,” Hinrichs said. “It was brought up in extreme situations when we can’t get to that person to rescue them, how is that person going to get rescued?”

Hinrichs said the Blackhawk helicopters out of Lincoln are one possibility. That might include people needing to be rescued from a building, he said.

Among the disasters the Nebraska National Guard has assisted with helicopters are hurricane relief, fires and floods. They have helped in Nebraska and the Midwest, in addition to as far away as the Carolinas to California.

The capabilities of the massive Army utility helicopter are seemingly endless, including moving people when roads are cut off, hauling 9,000 pounds of sandbags at once or carrying up to 600 gallons of water at once to dump on a wild fire.

It can easily fly more than 150 mph and hold 11 passengers along with a crew of four. It can drop a cable and rescue basket up to 300 feet away, which might be helpful if there are lots of trees and someone is injured on the ground.

Norfolk Fire Chief Scott Cordes said having the Blackhawk come to town allowed Norfolk and area emergency personnel to be better mentally prepared for when there might be a large-scale disaster.

“That includes having the understanding of what it takes for them to be deployed, to get authorization, to lift off, how we interface with them, how we communicate with them on radio frequencies and then to safely utilize them while they are here,” Cordes said.

Additionally, Cordes said Norfolk is fortunate to have the connectivity from Hinrichs and Dooley, who was a former reserve firefighter. In addition, Dooley’s father, Jim, was an assistant chief for many years in Norfolk.