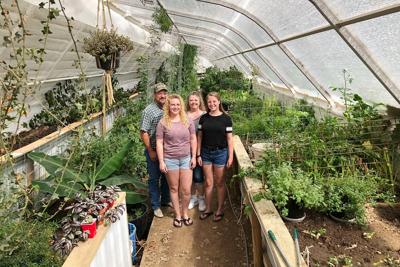 WAKEFIELD — Growing lettuce during the dead of winter in Nebraska may sound far-fetched.

But Ryan Lorenzen and his family, including his wife, Rhonda and daughters Hannah and Sarah, are doing just that.

Although the greenhouse looks like an oversized, odd-shaped igloo, Lorenzen isn’t paying astronomical fuel bills to maintain proper temperatures. In fact, he estimates it cost about 9 cents per day to operate the fans needed to circulate the air.

Instead of using propane or another traditional heat source, Lorenzen’s greenhouse is heated and cooled by a geothermal system that heats air by blowing it through 250 feet of tubes buried 9 feet in the ground, where the temperature stays around 50 degrees. The warm air is circulated through the greenhouse in the winter. A similar system cools the building if it becomes too warm.

Russ Finch of Alliance, a retired postal worker and wheat farmer, developed the process almost 30 years ago. Lorenzen saw a clip about Finch on Nebraska Public Television and became intrigued.

A U.S. land surveyor, Lorenzen is nearing retirement and was looking for opportunities to pursue when he had more time, he said.

“I was curious (about the greenhouse), to say the least,” Lorenzen said.

The Lorenzens visited Finch in the summer of 2018, and the following December, they toured a greenhouse at the North Platte NRD office in Scottsbluff.

Last summer and fall, the Lorenzens built their greenhouse, and in September and October planted their first seeds and trees.

The 138-foot structure has a steel frame. The north wall is metal siding with urethane foam on the inside, and the south side is covered with flexible 8-millimeter Lexan brand, twin wall polycarbonate panels that allow in filtered sunlight. During the summer, those panels can be covered with shades to help keep out heat.

But even in the fall and winter, the greenhouse can get too hot instead of too cold. For instance, one day last fall, when the shades were open, the building reached 120 degrees, which “scalded the avocado tree and turned the leaves into potato chips,” Lorenzen said. “But it came back.”

To alleviate the problem, when the temperature reaches a certain level, a fan at the end of the greenhouse sucks cold air through tubes into the grow room and out through the exhaust tubes.

In Alliance, Finch is growing a variety of citrus fruits as well as blueberries and even orchids. Bananas are growing in the greenhouse in Scottsbluff.

“We have planted almost everything that interests us to see what works,” Lorenzen said. “Sarah is constantly propagating any plant she gets a mind to try — flowers, roses, ivy, etc.”

Even though they are new at greenhouse gardening, the Lorenzens have been eating and selling produce, which was the goal.

“Rhonda would like to ultimately make a retirement business of some sort,” Lorenzen said.

That’s not to say everything has been rosy. After white mold infiltrated some of the soil, Lorenzen learned to be careful about where he bought his compost. And aphids have been an issue on some of the plants.

The biggest setback happened in May when a gravel truck careened off the highway and smashed into the east end of the building, extensively damaging 12 feet of it. Lorenzen spent the summer repairing the damage.

Still, he and his family are enamored with their project and are happy to give tours and share their experiences.

After all, fresh fruits and vegetables are much better than anything you buy in the store, he said.

WISNER — A multi-year search for a suitable location for a new water tower in Wisner has settled on a third site that was agreed upon at a special hearing Monday evening.