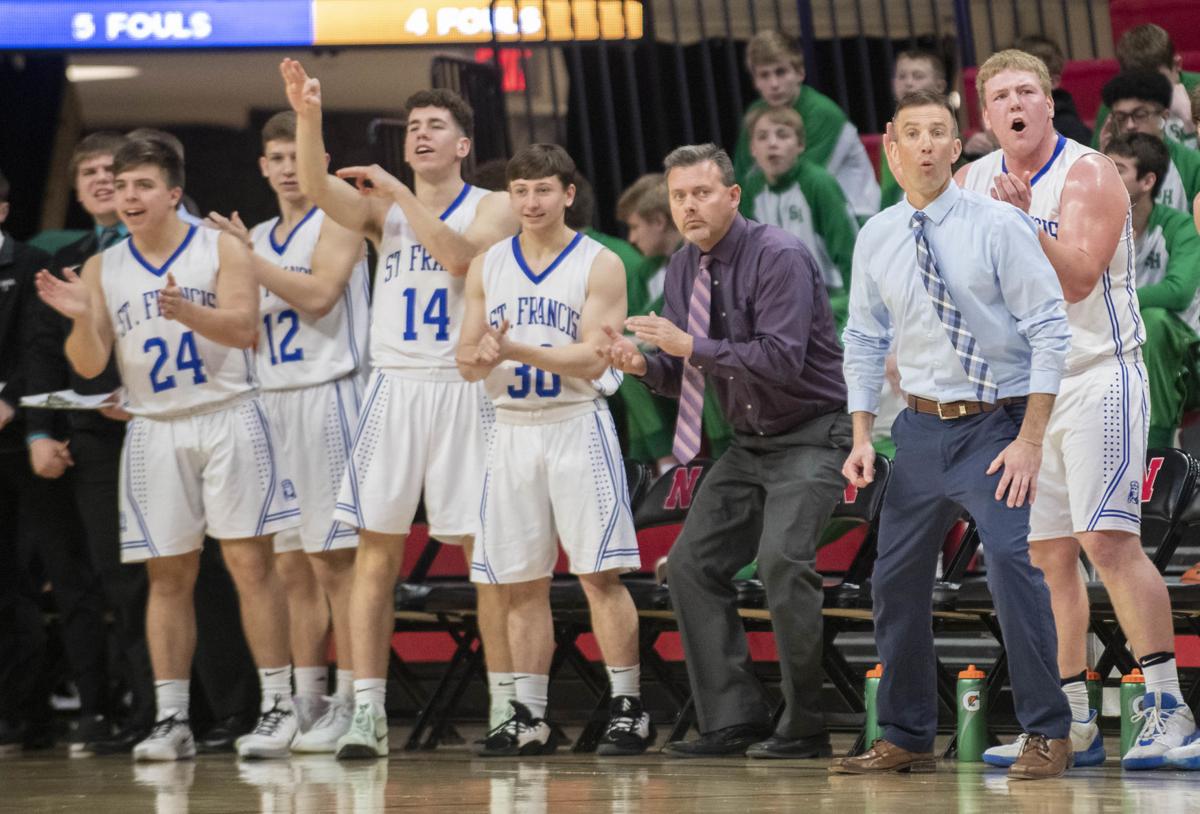 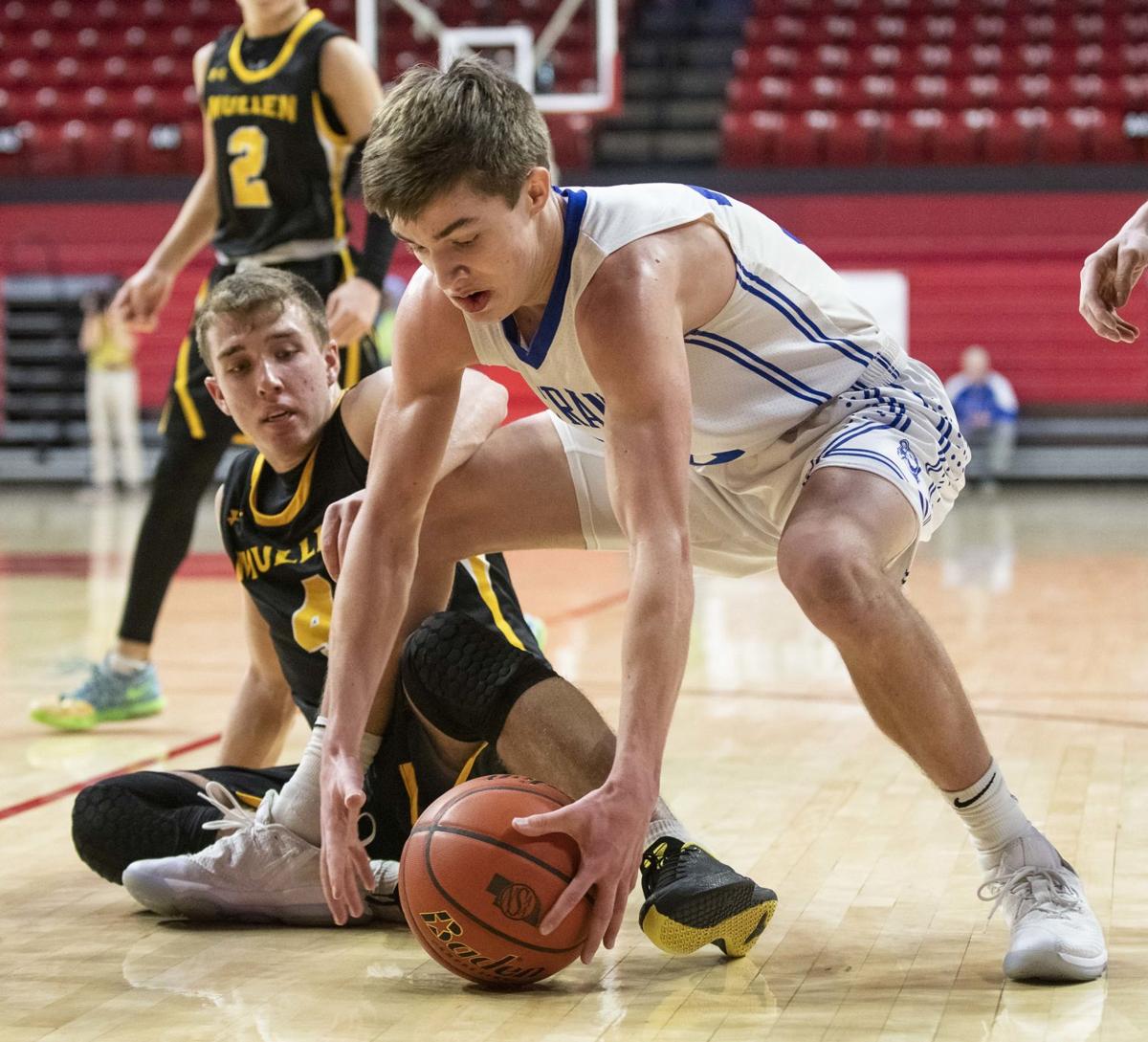 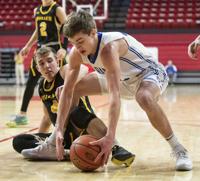 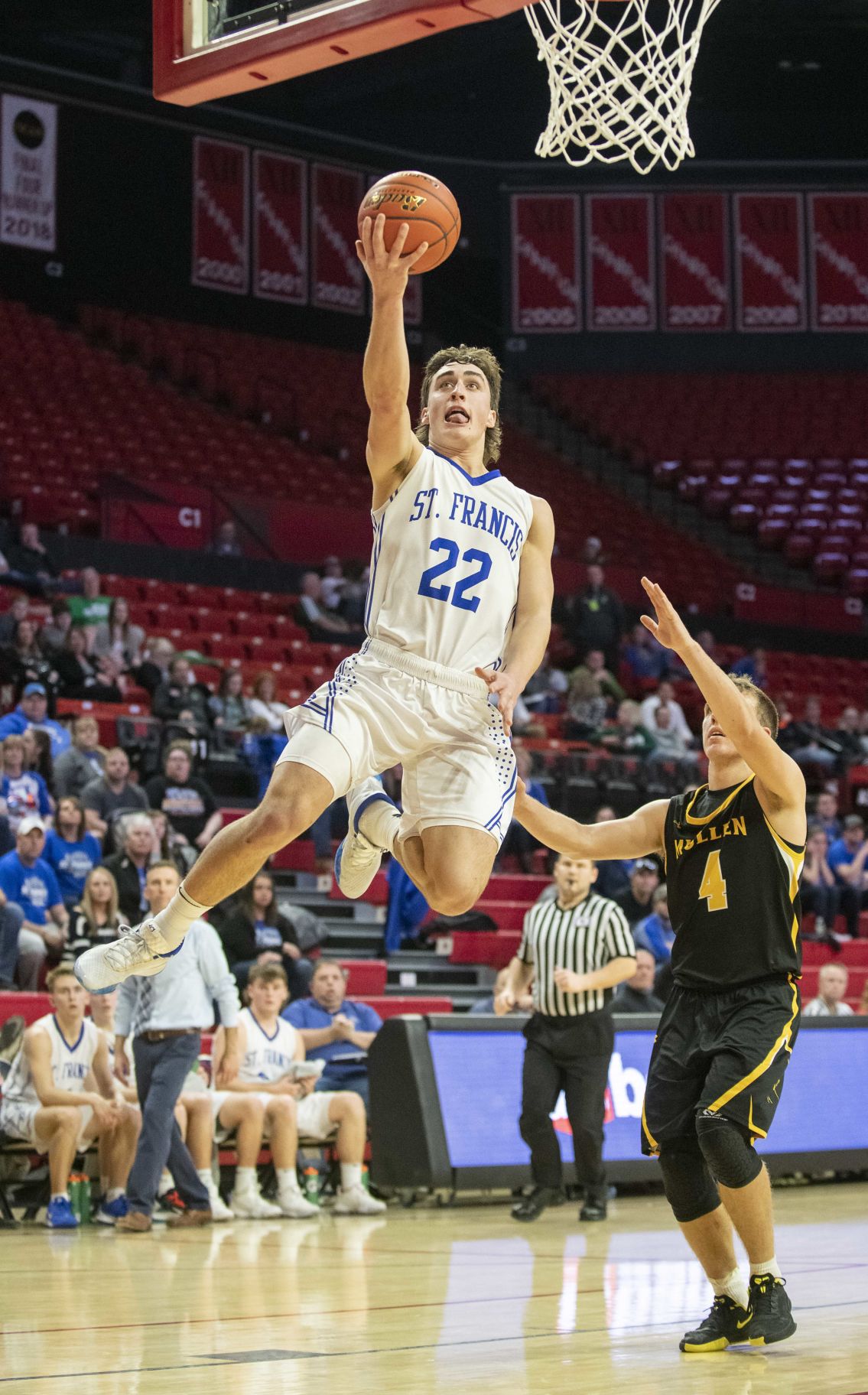 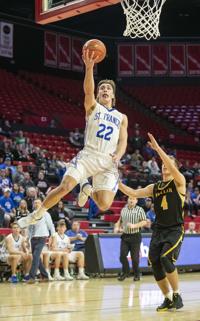 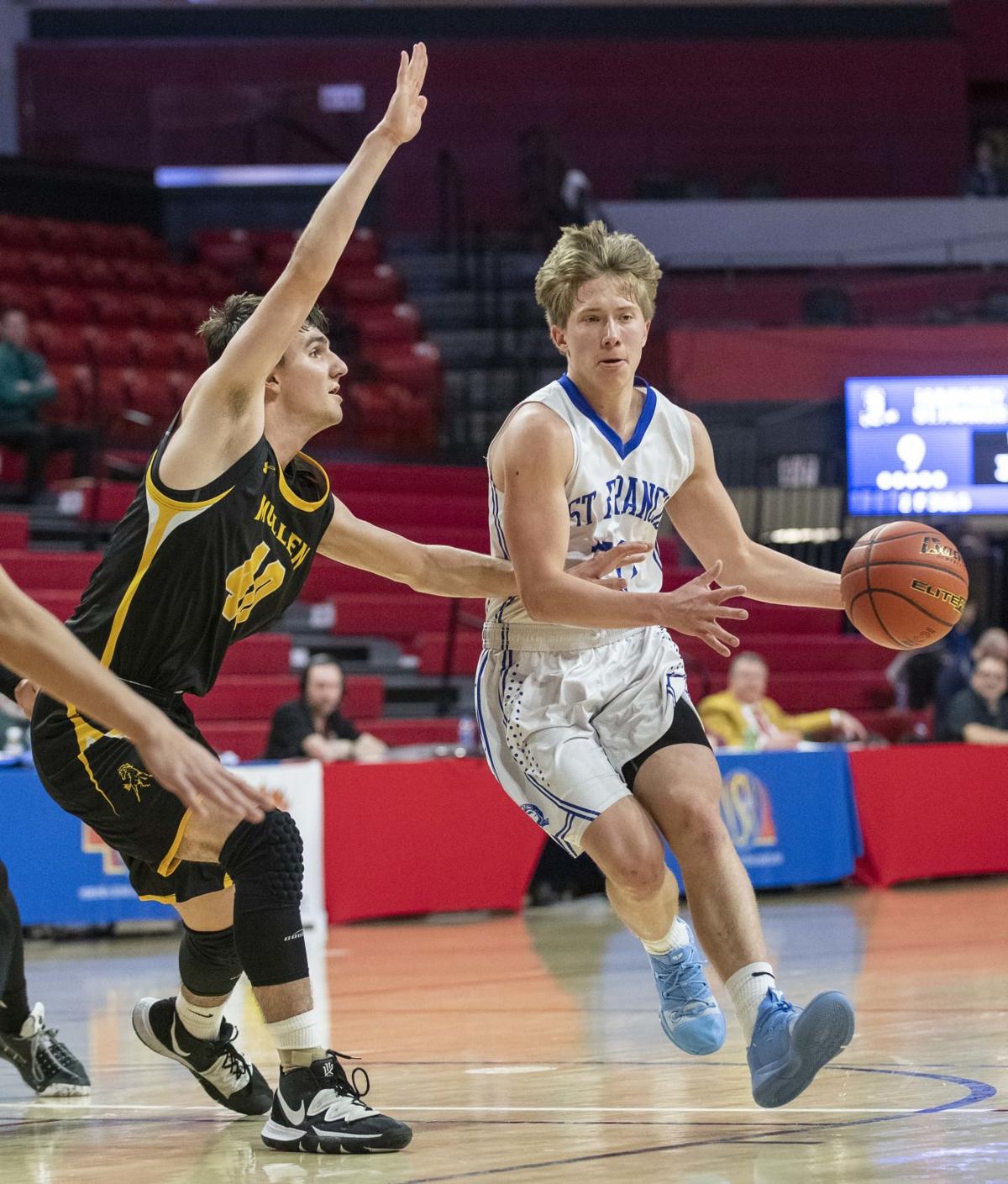 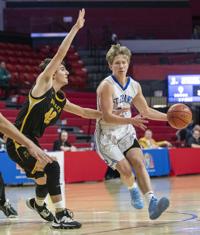 Mike Anderson/Correspondent Lincoln- Justin Leifeld of Humphrey St. Francis drives the ball down the lane past Bryce McIntosh of Mullen. 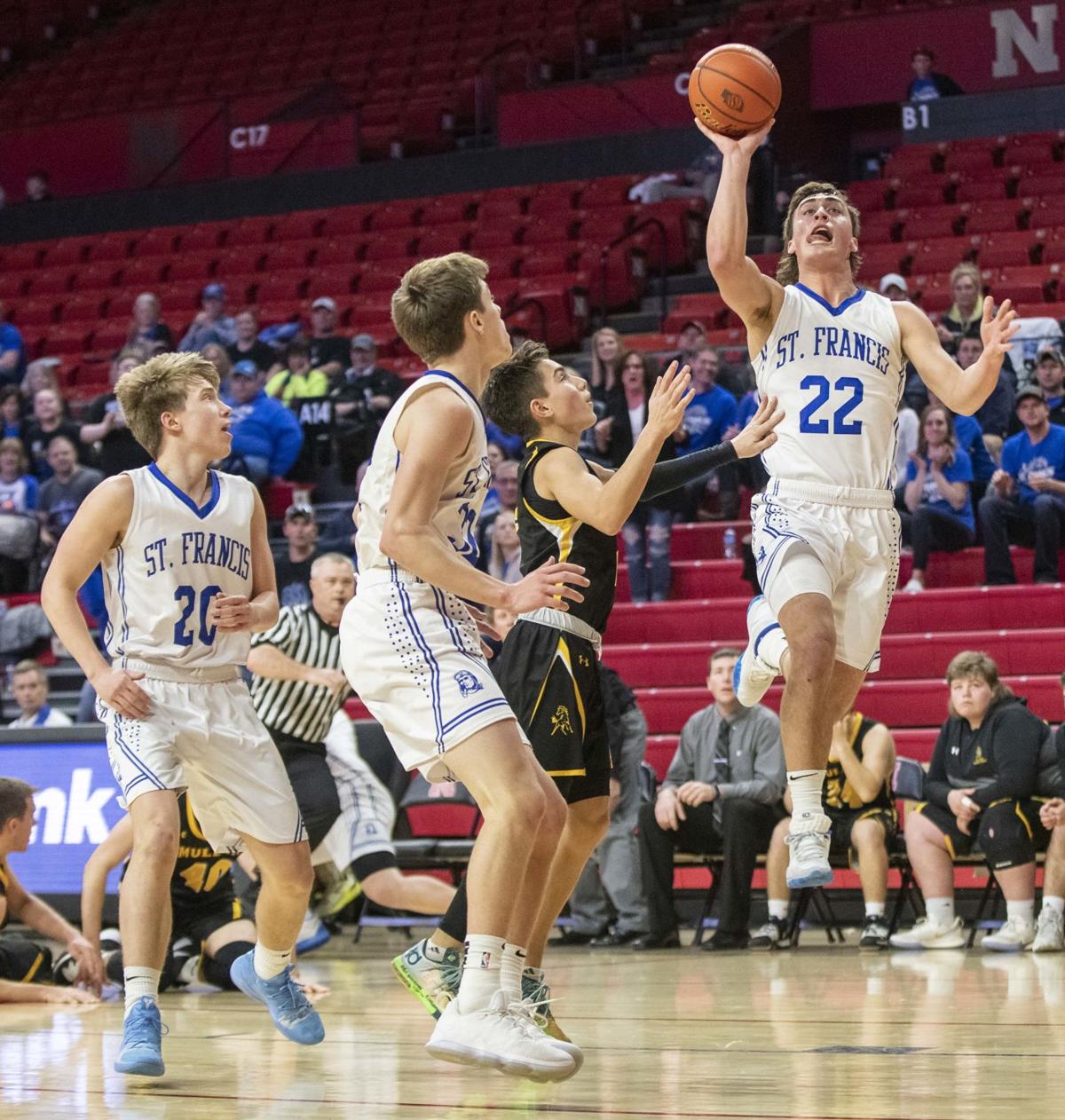 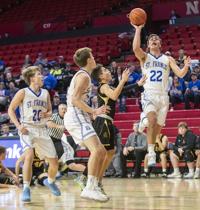 Mike Anderson/Correspondent Lincoln- Trevor Pfeifer of Humphrey St.Francis drives the lane for a layup past Trevor Kuncl of Mullen. 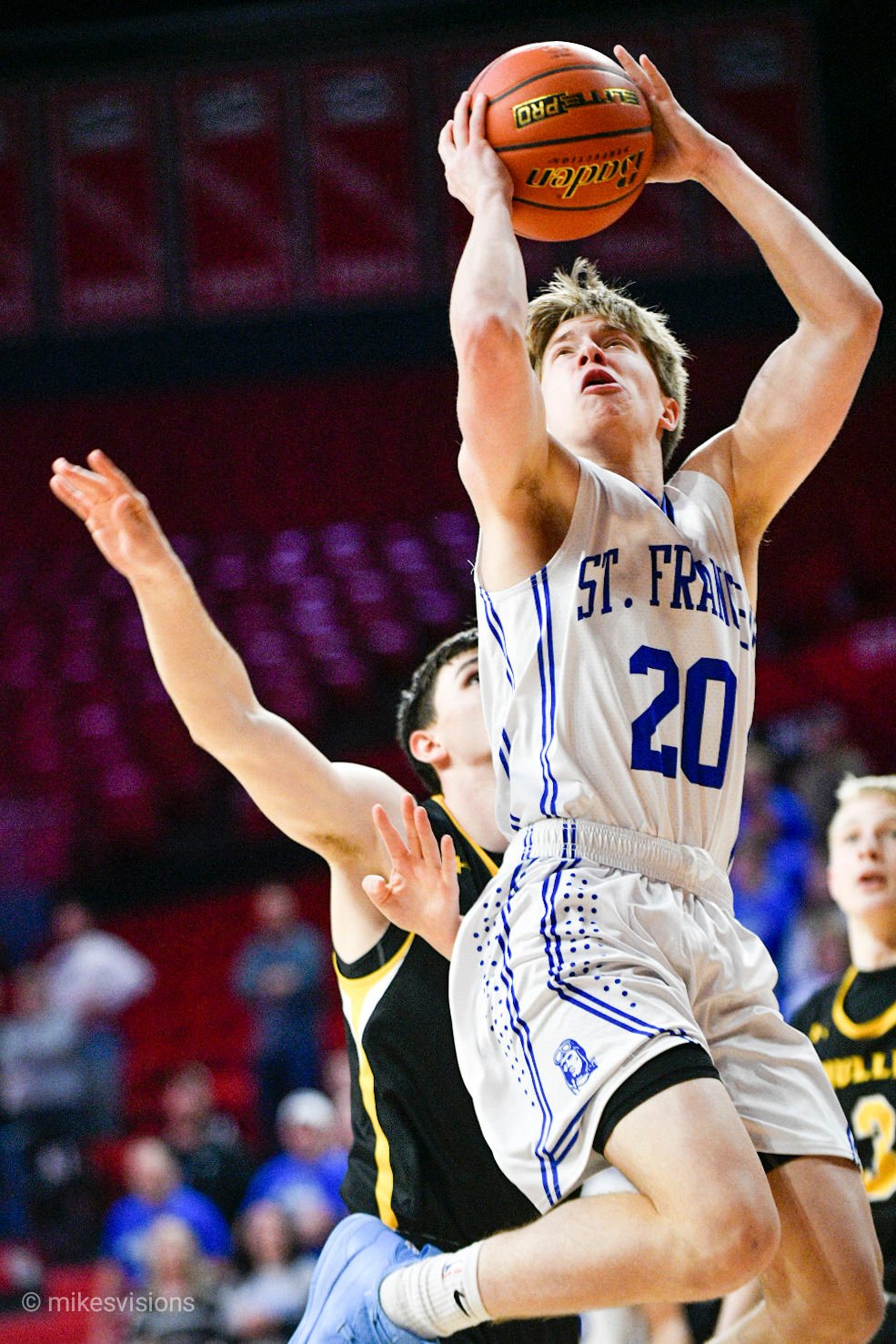 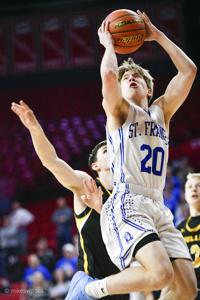 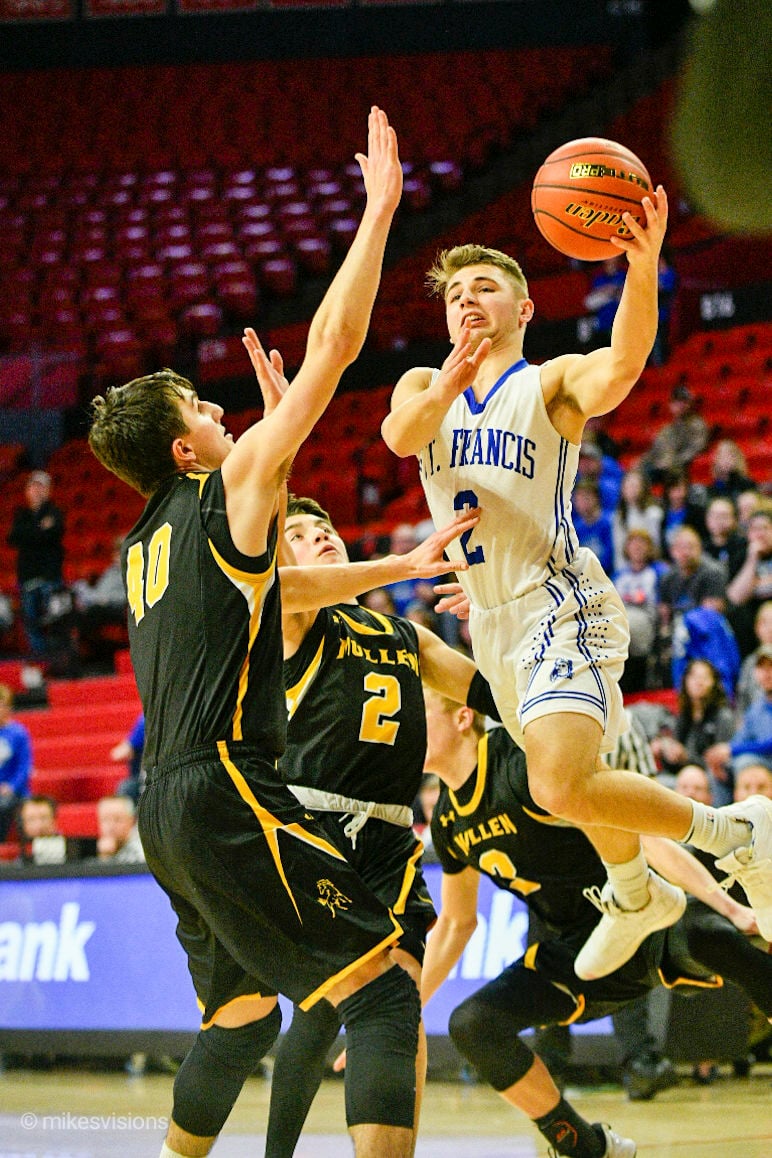 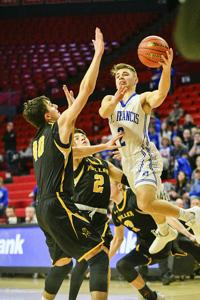 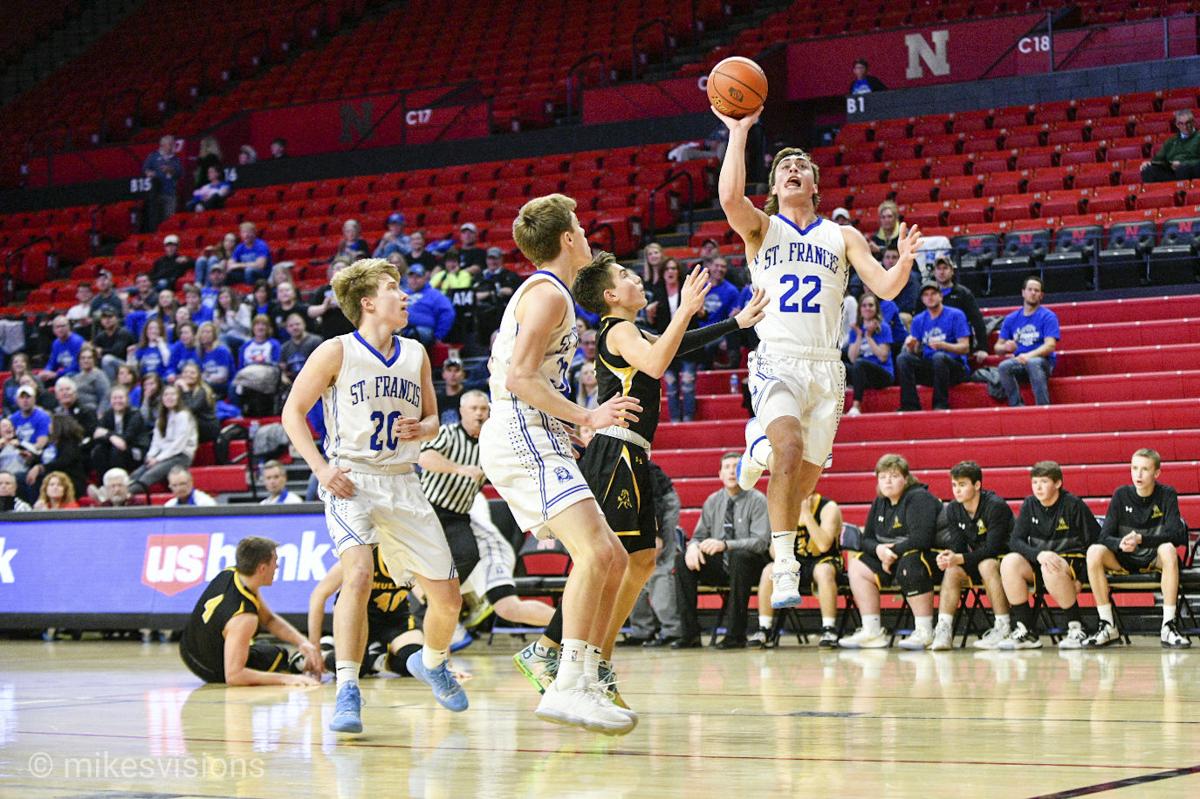 Mike Anderson/Correspondent Lincoln- Justin Leifeld of Humphrey St. Francis drives the ball down the lane past Bryce McIntosh of Mullen.

Mike Anderson/Correspondent Lincoln- Trevor Pfeifer of Humphrey St.Francis drives the lane for a layup past Trevor Kuncl of Mullen.

How else do you describe a game in which one team has 10 players score at halftime, a pair of brothers both record double-doubles and said team remains undefeated heading into the final day of the season?

The Flyers flew to the point of nearly inducing the 40-point mercy rule in the fourth quarter of their Class D2 semifinal game, soaring over the Broncos 74-35 on Friday afternoon at the Bob Devaney Sports Center.

“Our kids were determined, and they obviously played well today,” St. Francis coach Eric Kessler said. “They were ready to go. They knew how good Mullen was, but it was nice to see them get off to a good start and stay focused on the task at hand.”

And now St. Francis can talk about being an undefeated team playing for a state championship. The Flyers will face either Falls City Sacred Heart or Parkview Christian in Saturday's finals at 4:30 p.m. But that's all that the 27-0 record has promised the Flyers — a chance for a championship.

“I guess, maybe we think about it (the undefeated season) a little, but not much,” Trevor Pfeifer said. “We don't really care, because it doesn't matter unless you get the championship. We'll work hard to do what we have to to win tomorrow. We'll play a good team, and hopefully we can pull it out tomorrow.”

Yes, the program will be in the championship game for the 14th time in school history. But, while there are seven seniors on the roster, none of them has experienced this level of postseason success in basketball. The team's last appearance in the finals was in 2016 — when this year's seniors were in eighth grade.

“We've had success in football and now this year in basketball,” Kessler said. “When you've got guys who have worked for four years and this is their last go-round, you want to make sure that you go out with all of the cards on the table. That's what this senior group has done.”

Trevor Pfeifer, a 6-foot-2 senior, finished with a game-high 16 points to go with 10 rebounds, despite a 1 for 8 start from the field. His younger brother, 6-1 sophomore Tanner, finished with 12 points and a game-high 11 rebounds. Evan Foltz was next in line with nine points.

“It was really cool to see that,” Trevor Pfeifer said about Tanner's play. “That's just what he (Tanner) does every single game. He plays really hard, and he's known for it. He hustles, he dives on the ground and rebounds; he does everything.”

Outside of when the game was tied for six seconds, St. Francis led the entire game after Tanner Pfeifer tossed the ball inside to Evan Foltz for two points 10 seconds in to the game.

When Mullen did tie the game — on freshman Clayton Moore's teardrop in the lane — St. Francis answered with the next nine points.

Justin Leifeld drove the baseline and tossed in a stumbling layup as he was fouled for a conventional 3-point play to answer, and after Taylor Wemhoff hit two free throws, Tanner Pfeifer got the ball inside to Dylan Wemhoff for a nifty turnaround move in the lane for a basket. Trevor Pfeifer tacked on two more free throws, and Foltz's baseline jumper made it 13-4.

Trevor Pfeifer then added the statement play of the quarter. As a Mullen defender got set to try to induce a charge, he drove the baseline, cut behind the defender, and slammed in a dunk for a double-digit lead.

Mullen got to within 17-9 after Brendon Walker, who led the Broncos with 11 points while hitting 3 of 11 field goals, canned a 3-pointer to open the second-quarter scoring. However, St. Francis shut Mullen down without a field goal for the next 6:58. Leifeld and Haustyn Forney hit 3-pointers in just more than a minute, and the Flyers flew to a 13-3 run that put them ahead 30-12 with 2:53 left in the half after a Landon Kush bucket.

“Our defense was tremendous,” Kessler said. “

There would be no letdown after halftime, either.

Trevor Pfeifer seemed to put a bow on it in the third quarter. He drilled 3-pointers on back-to-back possessions and raced down to the opposite corner for a big block – all in a span of 20 seconds – to put the Flyers up by 28 with 2:20 left in the quarter. St. Francis reserves later combined for the final eight points as part of a game-ending 18-5 run.

“It's been a great ride, but we've got one more to go tomorrow,” Kessler said.

MADISON — Emotions were running higher than usual after a sentence was handed down at the Madison County Courthouse on Friday.