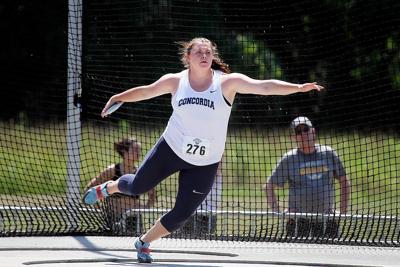 But there was a glimpse of hope for seniors when the NCAA Division I council granted waiver for all spring-sports athletes to receive an extra year of eligibility.

This was astronomical news for Concordia University thrower Adrianna Shaw.

"I was really upset at first, but I had already told Ed (McLaughlin) that I was going to come back. I knew that I deserved to have a really big senior season," Shaw said. "I put too much work into not getting that opportunity, and it was going to be too hard to completely walk away without knowing what could have happened. Not taking that opportunity would have really ate at me the rest of my life."

It was news to Shaw's ears when she found out that she could compete one more year, as this was something she had been building up since she was in the seventh grade back in Bassett.

At Rock County High School, Shaw lettered all four years in track and field as she racked up hardware along the way. Shaw won the discus state championship as both a junior and senior, while also taking home the shot put state title as a senior.

"Winning was definitely a goal starting my freshman year going into state track my junior and senior year," Shaw said. "Knowing I was capable of competing at fairly high level was always a goal."

After graduating in 2016, Shaw said she was surprised with the success she had early on in her collegiate career.

In 2017, Shaw took second place in the shot put at the NAIA Indoor Championship and she was also a NAIA Outdoor National qualifier in both the shot put and discus.

"I wasn't expecting to do that well in the shot (put). I was coming in ranked fairly high, but I was just going to try to get a feel of the championship atmosphere and do my best," Shaw said. "That was a really big confidence boost for me because I have never really been someone who is full of myself. I'm a little skeptical of my abilities sometimes."

The following year, Shaw stepped it up a notch and went on to win the 2018 NAIA Outdoor National Championship in the discus.

"That was not expected. We were practically in the middle of a tropical storm. I didn't let it get to me and I came out on top, which was super cool," Shaw said. "Confidence came into play because I had been there before and I knew what it took to win."

Throughout the next couple of years, Shaw continued to accomplish numerous accolades, including winning the 2019 NAIA Outdoor Championship in the discus, becoming a two-time GPAC Conference champion in the discus and being named the 2018 USTFCCCA NAIA Women's Outdoor Field Scholar Athlete of the Year.

Despite competing at the top level of her conference and in the country, Shaw focused more on the record books.

"Winning national championships is really cool, but getting my name on the record board in the weight throw last winter was really big for me," Shaw said.

Shaw was building momentum throughout her college career until the coronavirus pandemic brought everything to a halt in 2020.

But late last March when the announcement of receiving an extra year of eligibility came to the surface, Shaw knew it was an opportunity she couldn't pass up on.

"She was pumped. She understands what a unique opportunity it would be to become a three-time national champion," Concordia assistant track and field and throwing coach Ed McLaughlin said. "To realize that she was coming back to get another shot, I can barely explain it."

Everything slowed down in 2020 and didn't really pick back up until the fall and winter.

"Training with her was pretty normal. We've been working together for a long time and she's handled everything well," McLaughlin said. "We're always trying to get to the next step and next level. We've made some improvements, but the big thing is getting back into competition mode."

McLaughlin has seen Shaw grow and mature firsthand, not just as an athlete but also as a person. McLaughlin said he sees the confidence Shaw now has, but the person she is now is what he saw her becoming back when she first came to Concordia.

"It's been a blessing for the program. You never assume anything when you first recruit an athlete, but you hope for the person you are getting, and we got exactly what we were looking for," McLaughlin said. "It's been great having her around. She's been a big part of the future of the program, and it's going to be an amazing finish to her college career."

Concordia's track and field team got back into the swing of things in March as it kicked off its 2021 outdoor season at the Grand View Viking Relays in Des Moines.

With a glimpse of normalcy, Shaw has two things to focus on in the future, the conference meet and the NAIA Outdoor National Championship in May.

"I tell her, 'This is one of the last times you get to do this.' So she's putting in the effort, and you can tell that she is focused," McLaughlin said.

Shaw plans to finish out the season, as she will be graduating in May, and already has a job lined up to teach ESO in Tunisia in November.

It's been a crazy journey up to this point for Shaw as she has been competing at Concordia over the past five years. Looking back, she wouldn't have wanted to do it any other way.

"Everyone looks back on his or her college decision and I can't imagine the experience compared to what I've had at Concordia. It's been more than what I ever wanted it be when I got here," Shaw said.

Kearney survived the Panthers’ aggressive start, got the lead, and then turned to its defense.

WISNER — As cattle come down with cases of pinkeye, the disease can be quickly transferred from one calf to another.

Carson Noecker took the field for his first varsity track meet on March 30 in the Cedar Catholic Invitational. Although it’s been less than a month since then, he’s already on the brink of etching his name in the history books.

After decades in Norfolk, Mayra Mendoza still didn’t feel as though she had a voice or place in the community.

WAYNE — Being at the southern end of the Northern Sun Intercollegiate Conference has its advantages as inclement weather predicted in North Dakota, including snow, moved the Wayne State baseball date with the University of Mary to the Pete Chapman Baseball Complex in Wayne.