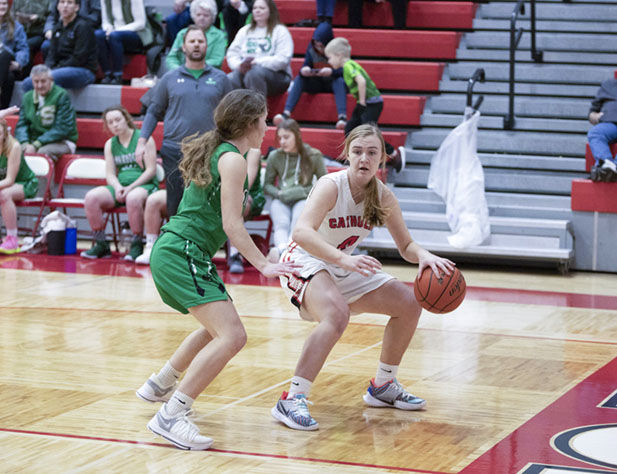 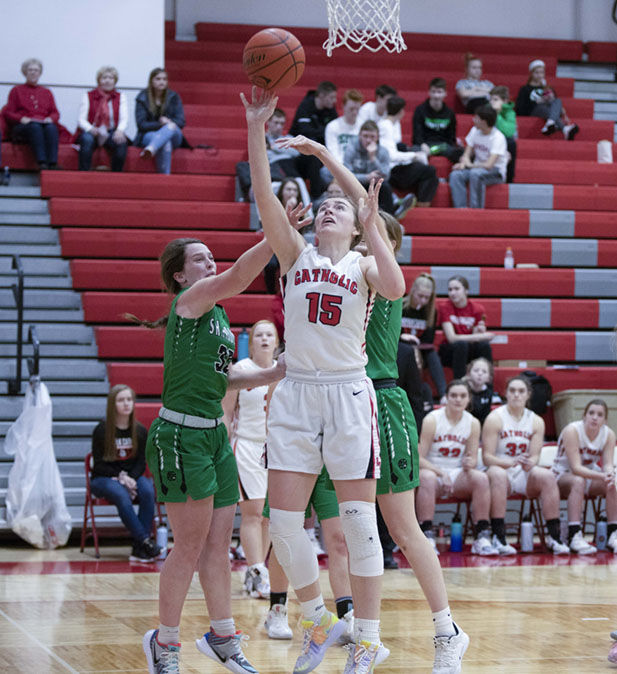 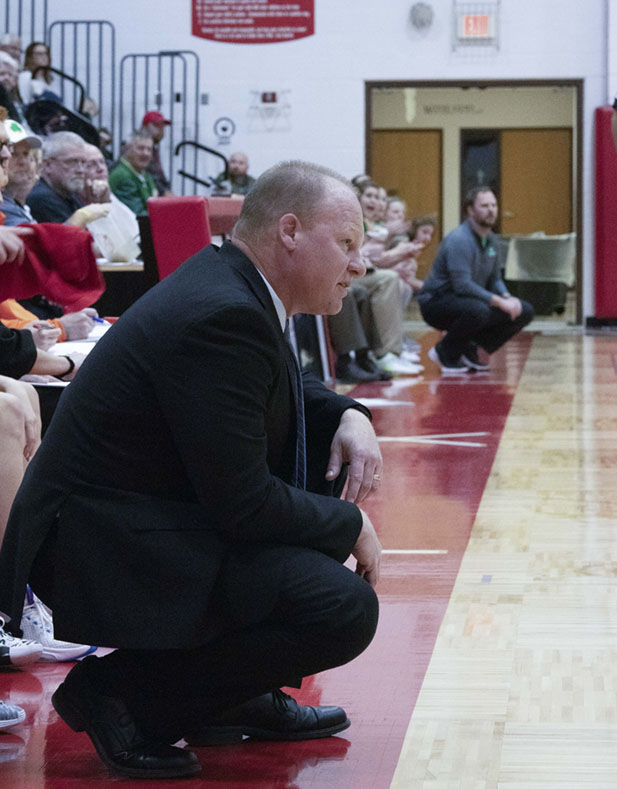 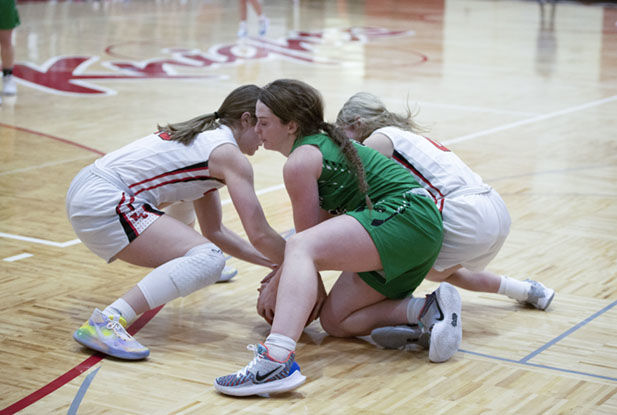 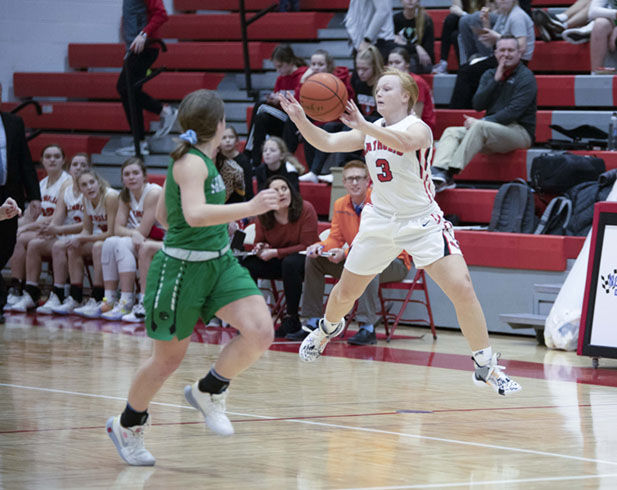 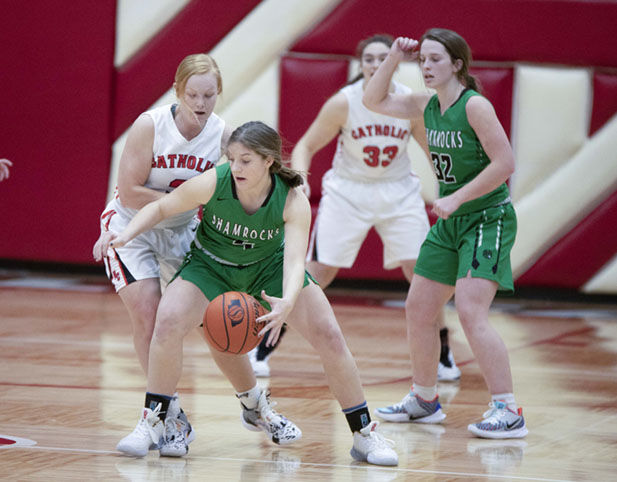 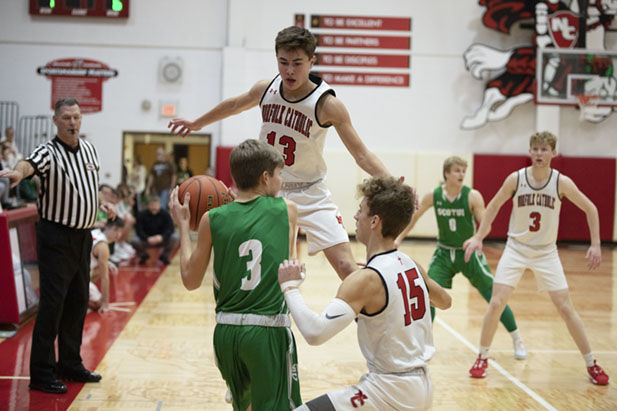 Corey Windedahl / Correspondent Josh Faust from Columbus Scotus desperately trying to pass the ball while being defended by the Knight’s Brennen Kelley (13) and Nate Brunghardt (15). 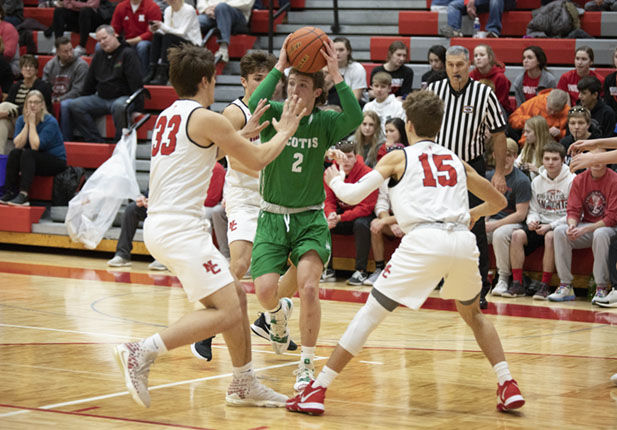 Corey Windedahl / Correspondent Columbus Scotus’ Tyler Palmer trying to pass the ball while being defended by the Knights’ Cameron Bettenhausen (33) and Nate Brungardt (15). 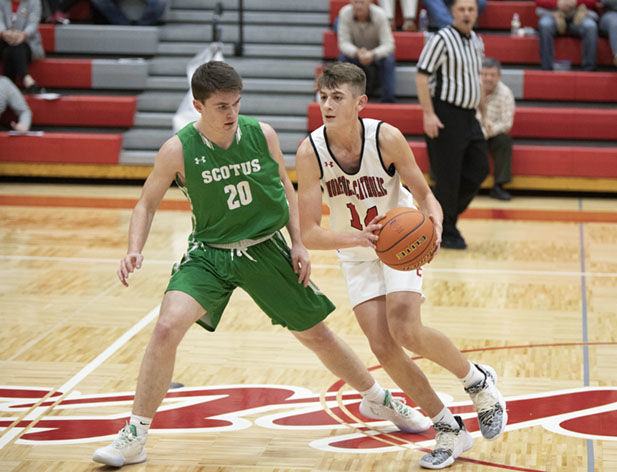 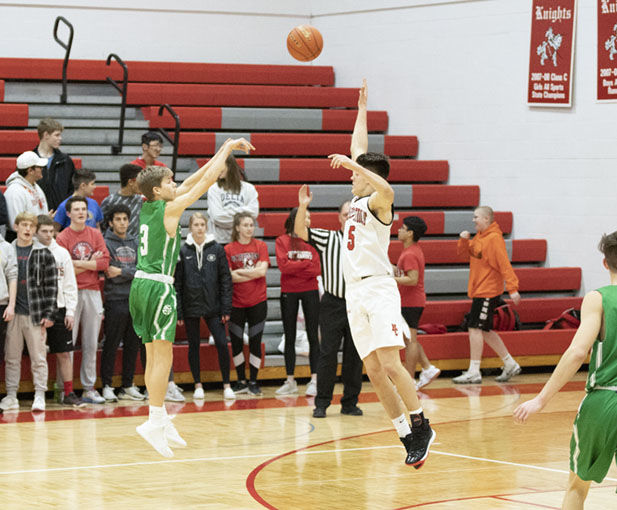 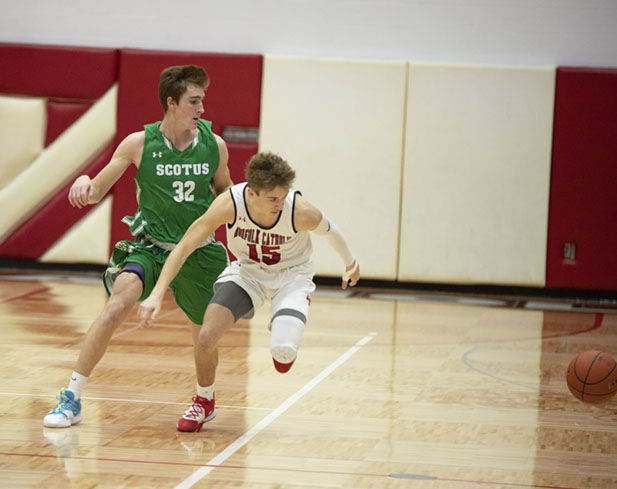 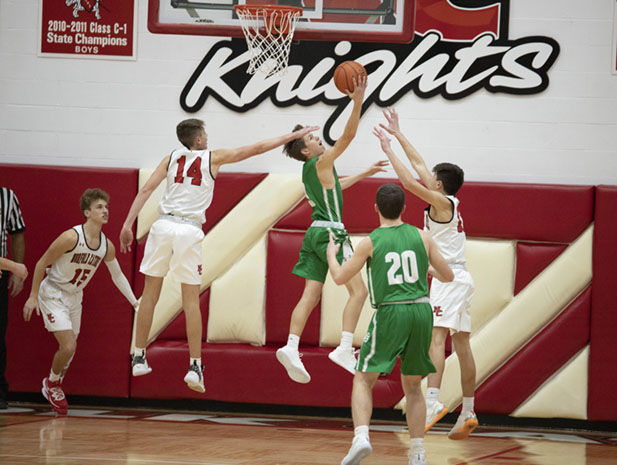 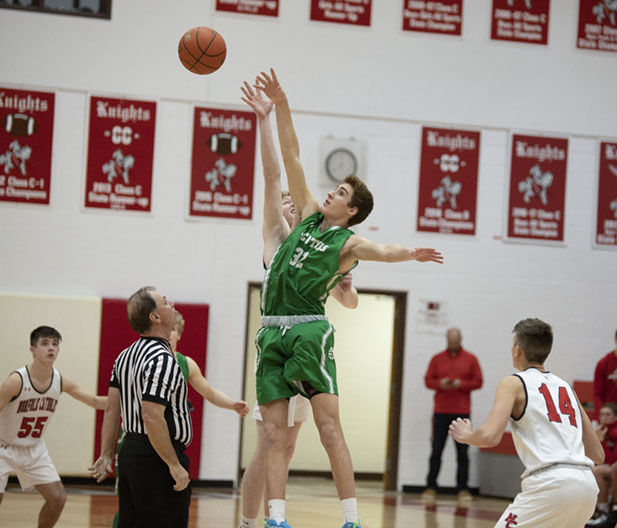 Corey Windedahl / Correspondent Josh Faust from Columbus Scotus desperately trying to pass the ball while being defended by the Knight’s Brennen Kelley (13) and Nate Brunghardt (15).

Corey Windedahl / Correspondent Columbus Scotus’ Tyler Palmer trying to pass the ball while being defended by the Knights’ Cameron Bettenhausen (33) and Nate Brungardt (15).

After losing the girls game 36-22 to Norfolk Catholic, Columbus Scotus salvaged a split by edging the Knights 66-60 in the boys contest.

In the girls game, scoring was at a premium all game long as the Shamrocks and the Knights combined for just three first-quarter field goals, but the two Scotus baskets were 3s by Kamryn Chochon and Amber Buhman, which gave the Shamrocks a 6-3 advantage early that became a 10-8 halftime lead.

Altering that slow start was the key to victory for Norfolk Catholic, according to coach Tim Kassmeier.

“I thought they wanted to play the game really slow, and if you look at all their scores, they haven’t been very high-scoring games,” Kassmeier said. “We knew coming in to the game that they were going to be pretty patient on the offensive end, and we wanted to extend our defense to pressure them a little bit.”

But, based on his team’s lack of first-half scoring, the Knights’ plan hadn’t met the objective of speeding up the Shamrocks to an uncomfortable pace.

“We actually started doing some things out of our half-court defense better, and then we were able to make some shots in the second half,” Kassmeier said. “The first half we had some good looks at the basket, but the shots didn’t go in, and when that happens, it’s hard to press on misses. So in the second half, we wanted to keep working the ball on offense to make them move defensively, and if we could get some to go down, we could use our quickness a little bit more.”

That strategy was more effective in the second half, as Norfolk Catholic’s offense produced six field goals in the third quarter — including four straight that allowed the Knights to take a 16-10 lead that increased to a 20-15 advantage entering the final period.

“We got a couple of steals out of the full-court press in the third that led to transition layups and also got one or two steals in the half-court that led to layups,” Kassmeier said.

Another run, this one 7-0 that began midway through the quarter and ended with 1½ minutes left, improved Norfolk Catholic’s lead to 31-20. The Knights then made 5 of 6 free throws late in the game to clinch the win.

“I thought the second half we played extremely well. I thought we moved the ball on the offensive end and made them work for everything they got on our defensive end,” Kassmeier said. “When you hold a team to 22 points, you’re going to put yourself in a pretty good spot. I also thought we made free throws down the stretch, which we haven’t done very much.”

“I thought we made good decisions with the ball, and I think that’s something we can build off of,” Kassmeier said. “Our shooting percentage (13 of 36, 36 percent) was pretty good again, which will help us overall, and we outrebounded them.”

IN THE BOYS GAME, the Knights opened the game with four 3s, two by sophomore Ben Hammond, to outscore Scotus 12-9 in the first period. But the Shamrocks returned the favor in the second quarter with six 3s of their own, negating another four treys from Norfolk Catholic, and two more by Hammond, to take a 32-27 lead at intermission.

“They like to play aggressive and get out and trap a little bit, so we wanted to take advantage of what they give us,” Scotus coach Tyler Swanson said. “We got a lot of shots on the inside, a lot of 3-pointers from corners. In the first half, we shot 11 3s (making six) by guys who shoot it well. When that’s part of your game plan and you execute that perfectly, that’s why we got out to a good lead there.”

Although the Knights made four more 3s in the third, Scotus added another point to its lead after its leading scorer, Garrett Oakley (16 points), got the ball behind Norfolk Catholic’s zone and sank three consecutive shots from the block and added two free throws when fouled on another opportunity. The Shamrocks led 47-41 entering the final period.

Norfolk Catholic reduced the deficit to four points twice, the last at 52-48 on Hammond’s fifth 3 with five minutes left, but the Shamrocks were able to hold on to the lead despite making just 7 of 14 free throws during the game’s final two minutes.

Meanwhile, the Knights’ attempt to take advantage of Scotus’ limited success at the charity stripe late in the game was hindered by making just 3 of 9 3-point attempts as the Shamrocks held on for the six-point win.

“We have to get better at consistently applying pressure. People think that when you use a 1-3-1, you just run it, but if it were easy, everybody would do it,” Norfolk Catholic coach Kevin Manzer said. “It’s a lot of work, learning to read the ball and cover the wing, the corner, the block, but that will come with time. Our guys still have to learn the amount of effort that it takes, that you can only go two or three minutes at a time if you’re really working hard.”

“Offensively, we’re shooting the ball well. This is five games now where we’ve shot well, but we’ve got to get to the free-throw line more and to the basket more,” Manzer said. “Now that teams have to come out on us, if we can’t get to the basket, that’s going to be a real challenge. We’ve just got to keep doing what we do and get better at what we do.”

An extra day of rest was just what Bancroft-Rosalie-Lyons-Decatur needed to end a winning streak for Oakland-Craig, but a true test awaits the…

After struggling a little early in the year, the young West Point-Beemer Cadets have hit their stride and are ready to take their spot among the area's elite.

Alisha Shelton is running for the U.S. Senate to “drain the gas out of Ben Sasse.”

WAYNE — The Wayne State men's basketball team wasted a first-half comeback against Minnesota State University-Moorhead as the Dragons rebounded in the second 20 minutes to finish off an 82-71 win over the Wildcats here at Rice Auditorium Friday evening.

Downtown Norfolk has seen new improvements in recent years, but Russ Wilcox of Real Estate Solutions Team saw the opportunity to be the first to implement a new idea.