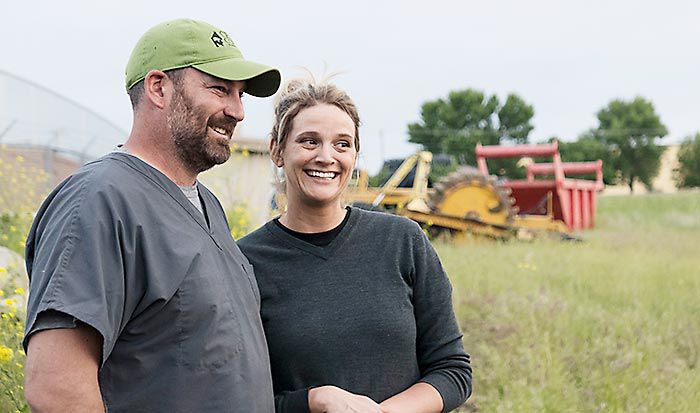 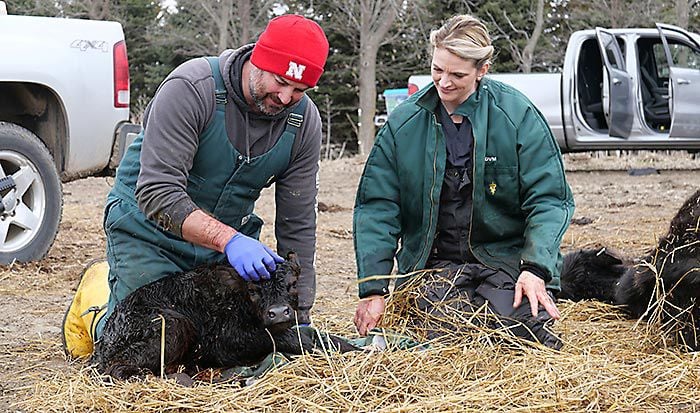 Dr. Ben Schroeder and Dr. Erin Schroeder cuddle the newborn calf after a successful cesarean from a terminal mother.

Dr. Ben Schroeder and Dr. Erin Schroeder cuddle the newborn calf after a successful cesarean from a terminal mother.

They really just wanted to save an old building.

“Heartland Docs, DVM” follows the couple as they visit clients and care for animals of all types and sizes.

There, they have restored a number of buildings, including a former clothing store that they transformed into a community center on the main floor and an upscale apartment on the second floor, where they live.

In early 2018, they turned their attention to the historic hotel building that had been vacant for more than 20 years. The 100-year-old, three-story brick building was structurally sound and had been partially gutted. Now, it houses a coffee shop, formal dining area and ballroom, a basement bar, 17 bedrooms and nine bathrooms. It’s listed on the National Register of Historic Places.

It so happens the couple’s renovation projects caught the interest of the media, some of whom compared them to Chip and Joanna Gaines, the Waco, Texas, couple who rose to fame by renovating houses.

From there, the Schroeders caught the eye of television producers who approached them about doing a renovation show. That evolved into a possible series following them as they care for livestock and family pets.

“A little over a year ago, a crew came out to shoot a pilot,” Ben said.

The series was picked up by National Geographic, and during much of the past year, a crew has followed the family and filmed the “farm calls ... and whatever comes in our doors (of their veterinary business).”

While having a film crew around “took some getting used to,” Ben said, the family enjoys the crew and the process. They made sure to include their teenage sons, Charlie, 16, and Chase, 14.

“This is a family business,” Ben said. “When we signed ... we made sure the boys could be involved.”

The boys’ personalities shine in the series, Ben added.

“Charlie jumped right in and is pretty natural,” he said. “Chase is a little more reserved.”

So far, six episodes have been produced that show actual encounters with clients and their animals, including cattle, pigs, kittens and even a llama.

While the couple are enjoying the notoriety, they hope the series accomplishes a number of things.

They know the show has had an economic impact on the town of 1,500. After all, the crew of eight has stayed at the hotel, eaten in the restaurants, bought gas at the local station and more.

“They have infused a lot of dollars in the community,” Erin said.

They also want to shine a positive light on area farmers and ranchers.

“People will see that producers take care of their animals like someone takes care of their kitten,” Ben said. “Comfort and care is the goal.”

In addition, the couple want people to see that Nebraska is a beautiful state with much to offer.

“We hope it showcases Nebraska ... and the Hartington area ... in a good light. We want people want to visit,” Ben said.

National Geographic Wild can be found on channel 283 on DirecTV, channel 190 on Dish and channel 262 or 1262 on Sparklight (formerly CableOne).

ADD HARTINGTON to the list. A site has been donated and a committee organized to comprise a list of veterans who had any affiliation with the …

WISNER – Sometimes you need some luck and North Bend Central created its own on Friday. The Tigers scored five points in the final five seconds of regulation to force overtime, then outscored Norfolk Catholic 10-2 in the extra session for a 55-47 victory in the C1-3 district final here.

The Norfolk High boys won their last home game of the 2019-20 season Friday night--a Class A District A-1 play-in game against Lincoln High--and produced their largest point total of the season in the process.

Choose an animal … if the spirit moves you

PENDER — Bancroft-Rosalie/Lyons-Decatur Northeast remained unbeaten for the season with a seemingly easy 59-43 win over Ponca here Thursday night in the C2-4 subdistrict final.

With no individual scoring more than eight points, Battle Creek turned to its defense in the rubber match against Class C No. 6 Pierce in the C1-7 subdistrict final Thursday night at Norfolk High School.

HARTINGTON — You could say Austin Creamer is prepared for his calling.