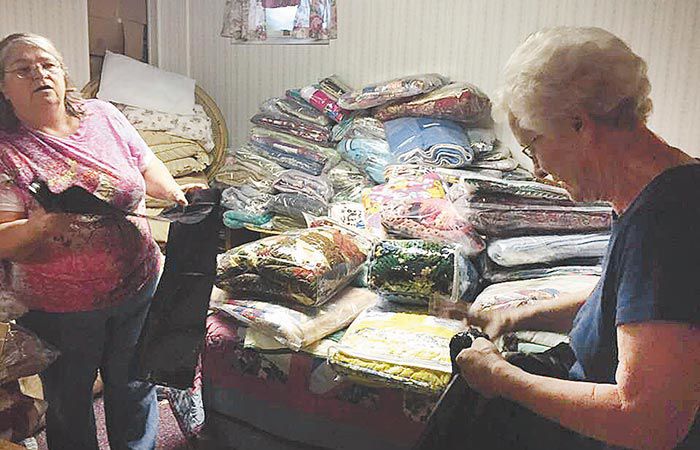 Pam Hoge (left) of Hubbell and Lorraine Wolf organize supplies for Quilts for Our Heartland. Earlier this year, the Hoge and friend Joyce Shutts, both of southern Nebraska set out to make quilts for flood victims in Northeast and North Central Nebraska, but as word of their efforts got out to others, the project grew to include quilters and donations from around the country. 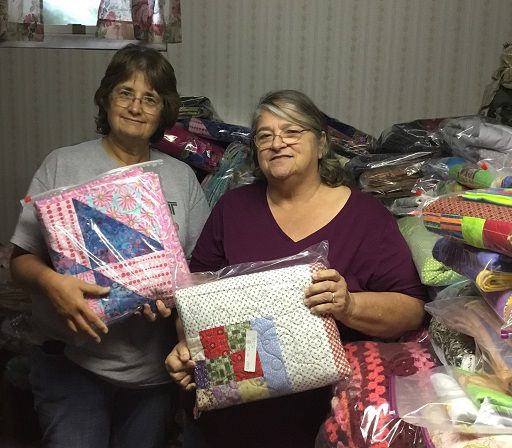 Joyce Shutts of Swanton and Pam Hoge of Hubbell organized the Quilts for Our Heartland project for flood victims in Nebraska.

Pam Hoge (left) of Hubbell and Lorraine Wolf organize supplies for Quilts for Our Heartland. Earlier this year, the Hoge and friend Joyce Shutts, both of southern Nebraska set out to make quilts for flood victims in Northeast and North Central Nebraska, but as word of their efforts got out to others, the project grew to include quilters and donations from around the country.

Joyce Shutts of Swanton and Pam Hoge of Hubbell organized the Quilts for Our Heartland project for flood victims in Nebraska.

Pam Hoge knows the feeling of helplessness that comes when floodwaters threaten your home.

About 16 years ago, the resident of Hubbell — a village of about 68 people that is 7 miles east of Highway 81 near the Kansas border — experienced a flood that left 6 feet of water in her basement.

“That was in June, and I burned out two high-pressure hoses washing things ... through the summer and into the fall. It was just never-ending,” Hoge said of the cleanup.

She couldn’t help but feel pity earlier this year as stories of the devastating flood in Northeast and North Central Nebraska made their way south.

Wanting to help, Hoge reached out to longtime friend and former schoolmate, Joyce Shutts of Swanton, and asked what she thought about using their quilting skills to bring comfort to flood victims.

“I said, ‘Would it be crazy to try to make some quilts to take up there? Maybe that will make them feel better,’ ” Hoge said.

Hoge said she and Shutts thought they could maybe put 25 to 30 quilts together to bring to flood victims, but as word of their endeavors spread to other avid quilters, the desire to become part of the project spread across the country.

On Friday, Hoge and Shutts set out with a group of about 12 people to deliver the 850 quilts, blankets and afghans that were made and donated as part of the Quilts for Our Heartland project.

“There were a lot of hands in every one of them,” Hoge said of the quilts. “Some of them that were sent to us I’m sure were one-needle quilts, so to speak, but there’s a lot where you can’t say just one person made them.”

The caravan’s first stop was Friday in Dannebrog, where they donated quilts to be raffled or auctioned off as a fundraiser for the flood-damaged Pawnee Arts Center.

The group then traveled up Highway 281 to O’Neill and, on Saturday morning, planned to make its way from Lynch through the flood-ravaged communities along the Niobrara River valley before stopping in Pierce late Saturday afternoon.

“We’ve gotten quilts from as far away as California to the west, Florida, Pennsylvania and Virginia to the east,” Hoge said. “I think there’s 13 different states represented.”

Hoge said the idea caught fire after she talked to Shutts, who then messaged another friend about their plan to make quilts for the flood victims. That friend told another quilt-making friend who happened to be on a “shop hop” in a quilt store with other women who all pitched in to donate quilting supplies.

“(They) got us a thing of batting or a piece of fabric or thread and put it all into a box and got it to her and she got it to us,” Hoge said.

Some of the helpers included a woman from Hebron, who added about a dozen quilts; another woman who donated an old quilting machine and a senior citizen who made 46 fleece tie-blankets for the project.

Hoge said her niece also added about 30 quilts to the project and used the experience to help teach her small grandchildren how to sew quilt blocks on the sewing machine.

“We’ve had people anywhere from 5 years old to the late 80s working on quilts,” Hoge said.

Hoge said she calls her local helpers her “Army of Earth Angels.” That army extends beyond those who made quilts and donated supplies. It also includes people who helped package the quilts, as well as people like Carmen Lechtenberg of O’Neill, who helped coordinate the logistics of distribution, and Dick and Phyllis Schoenholz, who offered the use of their enclosed trailer for delivery.

Hoge added that the Schoenholzes’ offer of the trailer was eerily well-timed: “My niece and nephew were at the bottom of the stairs in the middle of a bedroom that is piled clear to the ceiling with quilts. My nephew said, ‘You’re going to need an enclosed trailer.’ Just then the phone rang; it was Dick and Phyllis Schoenholz, and they said, ‘We’ve got an enclosed trailer. Do you think that would be the way to go?’ ”

Hoge said the people who got involved in the project made the endeavor a fun experience, and she’s thankful to everyone who got involved. She initially thought it would result in only about 30 quilts to give away; she’s happy it turned into such an uplifting experience and said she hopes it brings comfort to her fellow Nebraskans.

“This is not a charity thing at all,” she said. “We are giving gifts of love. That’s it. That’s what we’re trying to get across to everybody. We’ve been in situations like this, too. It’s a warm hug, a pat on the back. ... We understand and we know you’re going to come through, and that’s basically what it’s all about.”

Happy as the deal is good

BATTLE CREEK — Laurel-Concord-Coleridge may have looked different from its first 14 games this season, but the result sure looked familiar.

The Norfolk High swimming and diving team’s results in Thursday’s dual with Kearney were largely determined by depth.

Over the past 15 years, Humphrey St. Francis has been one of the top Class D boys basketball programs in the state.

MADISON — It will continue to be up to voters to choose Madison County’s land surveyor.