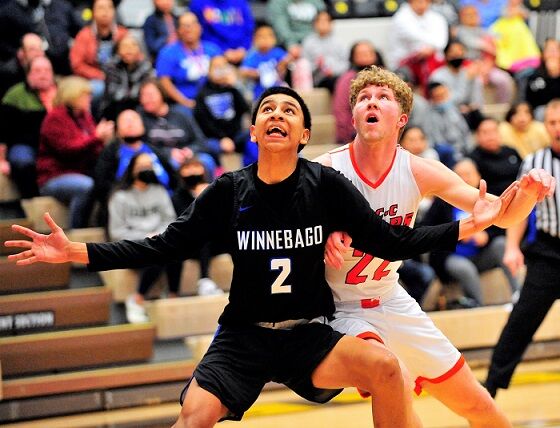 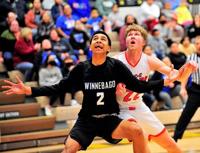 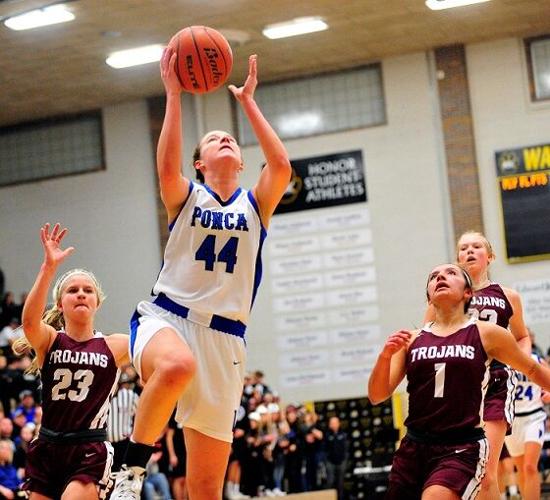 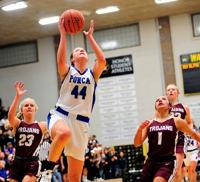 Samantha Ehlers (44) of Ponca gets a shot up as Jordan Metzler (23) and Aishah Valenzuela (1) of Wakefield trail her during the Lewis & Clark Conference championship basketball game on Monday night at Wayne State College.

Samantha Ehlers (44) of Ponca gets a shot up as Jordan Metzler (23) and Aishah Valenzuela (1) of Wakefield trail her during the Lewis & Clark Conference championship basketball game on Monday night at Wayne State College.

WAYNE — The Lewis & Clark Conference finals belonged to the Indians.

Ponca and Winnebago that is, both of whom returned to the stage after making appearances a year ago, this time at the Rice Auditorium at Wayne State College.

After finishing as the runners-up last year, the Class D No. 4 Ponca girls won in dominating fashion, beating No. 8 Wakefield 51-22.

“It feels good, especially with the group we got out. We had some ups and downs through this tournament so I’m glad the boys came out and showed out,” coach Jeff Berridge said. “It’s big time for us and big-time momentum going into the end of the season.”

With 38.7 seconds left, the Bears had the ball out of a timeout down 45-44. Gibson Roberts inbounded the ball to Grant Erwin. Roberts got the ball back and tried to find Evan Haisch around the free-throw line, but his throw sailed out of bounds.

The orange and white were forced to foul, and Dyami Berridge made both free throws to make it a 3-point game with 16.9 seconds left. Still, the Bears had a chance to send it to overtime.

This time, Roberts inbounded to Haisch, who dribbled at the top of the 3-point arc before serving up a shot. It was wide and Winnebago’s Javon Price got the rebound, allowing the Indians to draw a foul on Berridge, who sunk another free throw and put the game away.

Berridge led the blue and black with 22 points and scored 10 of their final 12 points of the game. To him and his teammates, the previous two losses — one during a holiday tournament and one in Winnebago — gave them plenty of motivation.

“We were just hungry. It’s hard to beat a team three times,” he said. “We got it back tonight when it means something.”

Following a first quarter that saw the Indians sink four 3-pointers, Laurel-Concord-Coleridge began working the paint more, finding Jake Rath and Carter Kvols for buckets down low. It was a 3 by Roberts that put the Bears up 27-23 with one minute, 10 seconds left in the first half.

Just 14 seconds later, Timothy LaPointe hit a layup to make it a one-possession game. Then just before the buzzer, Price forced a turnover and drove to the hoop for a basket. He was fouled on the way up and the basket counted. Price missed the free throw but tied it up before halftime.

After exchanging a free throw apiece, Wilton Roberts hit a 3 to break the tie with 4:45 left in the third quarter, but another layup by LaPointe and a 3 by Price sparked a 9-2 run to end the period with a 37-33 lead.

“The atmosphere tonight really had our kids thinking instead of playing,” Bears coach Todd Erwin said. “The kids worked hard, but they just made it tougher than they needed to.”

Winnebago will have a quick turnaround as it travels to take on Wakefield on Tuesday. Laurel-Concord-Coleridge hits the road to face Wisner-Pilger on Thursday.

IN THE FIRST game of the night, Ponca led Wakefield by four after the first eight minutes. Shortly after the second half started, a 3-pointer and two free throws by Ashlyn Kingsbury sparked what would end up being a dominant third quarter.

The Indians didn’t allow a single Trojan field goal in the period, and only two free throws by Aisha Valenzuela put them on the board.

“We did a great job rotating. We rebounded really well that quarter,” Ponca coach Bob Hayes said. “So we gave them one shot, rebounded the ball and went down and ran some offense and got something good.”

Ponca used the third quarter as the chance to pull away. Six field goals and three free throws helped it open up a 35-18 lead heading into the fourth.

Kingsbury led the charge for the blue and white with 18 points. The junior was on the Indian teams that lost to Wynot in the finals the past two years. She hopes that coming in first this time around starts a new trend for the rest of the season.

Ponca also has finished second in Class C2 the past two years.

These teams may very well see each other again down the road. The two — along with Class C No. 3 Crofton — will be in the same subdistrict once play starts in two weeks. For Wakefield coach Kent Emswiler, being ready involves being more aggressive

“Ponca was definitely the aggressor tonight. If we can be the aggressor 50% of the time, I think we can be back in the shape of playing a closer game,” he said. “But they did come out aggressively against us, and we didn’t adjust well enough.”

The Indians return to action on Friday when they host Homer. Wakefield hosts Winnebago on Tuesday.

Will inflatable furniture be the latest fad?

Our family recently spent a weekend at a unique Nebraska bed and Breakfast on a boat in southeast Nebraska just off Interstate 29 about halfway between Omaha and Kansas City right outside the town of Brownville.

MADISON — A woman who stole nearly $90,000 from her former employer through repeated misuse of company credit cards could face prison time after she was convicted of felony theft on Monday.

Man tests positive for meth, gets animated with judge after being denied a second sample

MADISON — A Norfolk man who took issue last month with having to take a drug test before his court hearing tested positive for meth on Monday and again blamed the dirty result on people other than himself.

MADISON — A prosecutor has dismissed a felony charge against a rural Norfolk man suspected in an alleged assault on New Year’s Eve.

MADISON — A Norfolk man previously charged with first-degree sexual assault in connection with sexual abuse of a teenage girl dating to 2011 was convicted of a pair of less serious charges on Wednesday in Madison County District Court.

This farmer never gave up

CROFTON — A year ago, Kenny and Dana Wortmann had a lot on their plate.