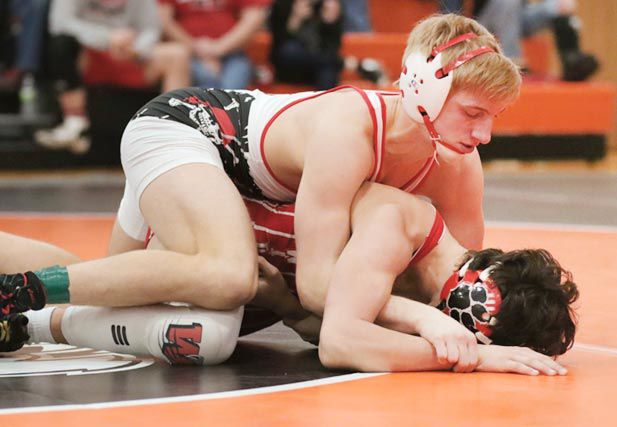 Nate Christensen off Plainview controls Gabe Escalante of Winside in their 138-pound match during the Lewis & Clark Conference wrestling tournament in Osmond on Thursday.

Nate Christensen off Plainview controls Gabe Escalante of Winside in their 138-pound match during the Lewis & Clark Conference wrestling tournament in Osmond on Thursday.

The Pirates dominated the field, outscoring Quad County Northeast 333-150 to take the conference plaque back to Plainview.

"Winning here was one of our goals for this season," longtime Plainview coach Dean Boyer said. "I was pretty pleased with the way we wrestled today."

The remaining goals for Plainview will not allow Boyer's team to rest on its laurels.

"We have set our goals very high for this season," Boyer said. "We want to win a district title, a state title and a state duals title."

Lanham's title was at 106 while Christensen earned his at 126 last year.

"It takes a lot of hard work by a lot of people to build a program like we have at Plainview," Boyer said. "But we have a lot of work left to do to get where we want to be this season."

The Indians' coach, Adam Tranmer, is building his program from the ground up and seems to be making progress.

"He's doing a great job there," Boyer said. "He's getting kids out, which is a good start — and they showed here today they are learning how to wrestle and compete."

Winnebago had a couple of champions in Robbie Lovejoy at 220 and Darion Earth at 285.

"First we had to convince our kids there was something more than basketball to do in the winter," Tranmer said. "We are starting to get some good numbers, which means more competition in practice and better wrestlers on the mat each match."

He also noted the young kids is a great place to start.

"We have 26 kids wrestling in our youth wrestling program," Tranmer said. "Those kids will be our future, and they will already have wrestled four or five years when they get to this level — that's very important."

Ponca had two individual champions in Dalton Anderson at 126 pounds and Hunter Bennett at 160.

RJ Wilmes earned a gold for Creighton at 145.