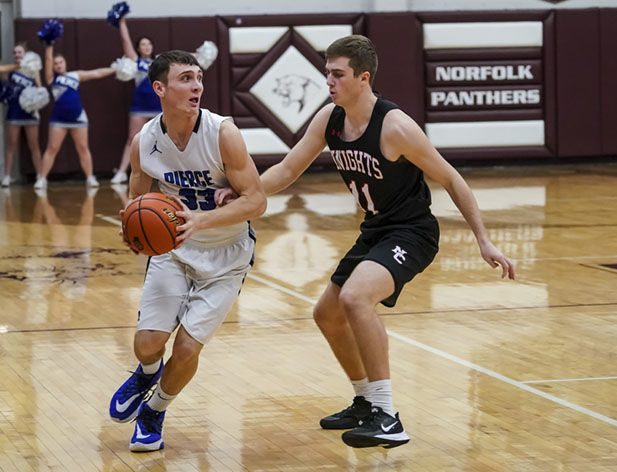 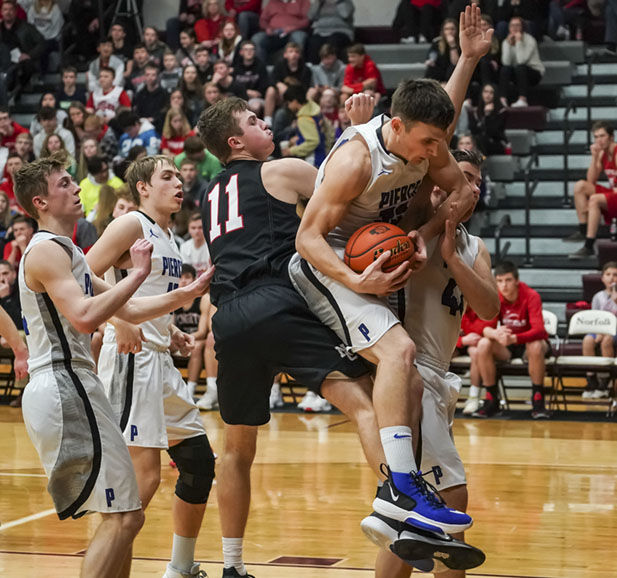 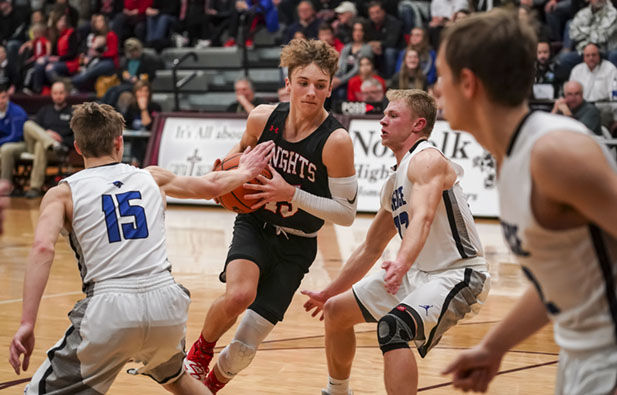 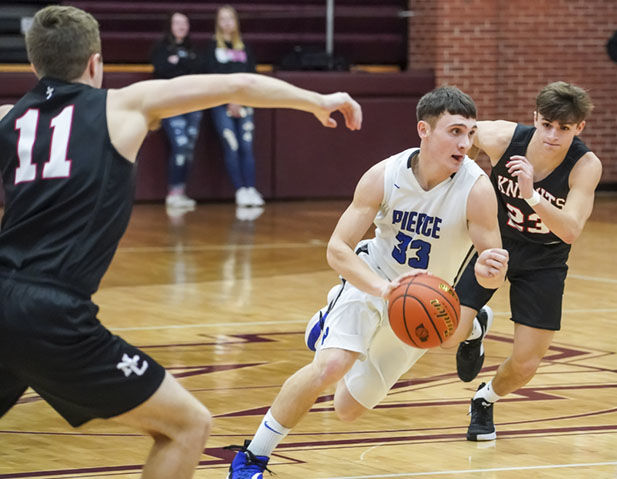 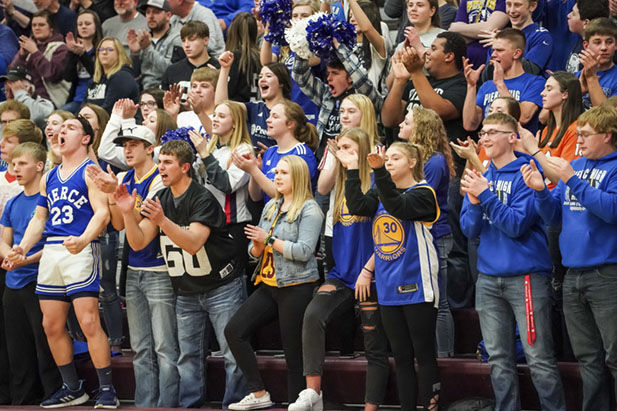 But once the Bluejays got soaring offensively, the Knights couldn't knock them off their perch.

Pierce (14-9) will face top-seeded Battle Creek (17-7) in Thursday's subdistrict final at 7 p.m., with the winner of that game advancing to Saturday's district finals.

“Without a doubt, any of the … top three teams, any of them, could come out of this,” Pierce coach Mike Emory said. “We were lucky to beat a good Norfolk Catholic team, and now we've got to face probably an even better Battle Creek team.”

Norfolk Catholic ends its season with a 9-13 record after a 1-4 start.

“We did some good things, but we just have to get better at what we do against a big, physical team like Pierce,” Norfolk Catholic coach Kevin Manzer said. “If they take you out of what you do, you're in trouble then. It's hard to score.”

“Dawson just loves the game of basketball,” Emory said. “He plays it every day, all year round. Obviously, the kid can jump out of the gym. He's always trying to finish against guys a lot bigger and a lot heavier and stronger than him, but he can get the job done. He obviously got to the free-throw line a lot tonight, and he did benefit from some really good passes underneath the basket.”

That was indicative of how Pierce responded from its early woes. The Bluejays shot 55.2% (16 of 29) from the field and coupled that with 23 of 30 free-throw shooting.

But even with that efficient clip, the Bluejays had to weather a late charge by the Knights.

Norfolk Catholic hit eight straight free throws to make it 45-36 and, after a Pierce turnover, Preston Burbach's 3-pointer with 3 minutes, 12 seconds left put the Knights within six. Freeman scored off a fast break, and Ben Hammond hit a triple with 2:05 left that kept Norfolk Catholic in striking distance at 50-42.

But from there, Pierce scored the final eight points, starting with Freeman's long pass to a wide-open Watts and ending with 6 of 8 free throws in the final 1:25, to double the margin before the buzzer.

“I thought that, at one point, our two high-post offense was good for us. We got it to the high post, and then we'd go down,” Emory said. “And then obviously, in the second half, our 'wildcat' look, the diagonals, were wide open. They were out pressuring a lot harder, trying to trap us, but we got a lot of easy buckets obviously down the stretch. And our free-throw shooting came through.”

It was a surprising shift after Norfolk Catholic seemed to have all the momentum going into the second quarter. Nate Brungardt dribbled around the top of the key, used a sidearm pass to get the ball to Jackson Clausen, and Clausen's layup in the final seconds of the first quarter made it 12-7.

All that did was light the fuse for the Bluejays.

Watts scored four points in 13 seconds, hitting a pair of free throws before scoring a fast-break layup. Gavin Larson then connected with Freeman for a lead-changing 3-pointer just a few feet

in front of the Norfolk Catholic bench, and then Watts added two more free throws 16 seconds later. Freeman tacked on two baskets in just more than a minute, taking advantage of a backdoor cut to turn Carson Oestreich's pass into two, and then a layup made it 20-12 with 3:27 left until halftime.

“We wanted to slow the game down more,” Watts said. “Take care of it (the ball) and get more open shots. Let their defense break down.”

Hammond halted the momentum with a jab step and baseline drive for two, but Watts added another basket with 55 seconds left for the 22-15 intermission advantage.

“We had a couple breakdowns, and then offensively, we just couldn't score,” Manzer said. “Twenty-two points after the first half is fine. We're OK with that. But what we can't do is just have those scoring droughts.”

The Knights had more turnovers (eight) than shot attempts (seven) in the second quarter, and Norfolk Catholic's 1 of 7 field-goal performance opened the door for the game-changing run. The team ended the night shooting 36.1% (13 of 36) from the field along with 12 of 16 from the free-throw line.

“We were really good,” Watts said about his team's defense. “That was probably the best (defensive) ball pressure we've had in a while.”

Carter Rohrich hit twice from down low in a span of 20 seconds, the second coming off a quick pass from Freeman inside, for a 28-15 lead that forced a Norfolk Catholic timeout just 1:42 into the second half.

After that, Brungardt dished to Clausen for a 3 from the top of the key, and then Hammond knifed through the lane for a conventional 3-point play that sliced the gap down to 28-21 with 4:35 left. Cayden Cunningham made it a five-point game 1½ minutes later when he caught a pass, hesitated and then hit the easy jumper.

Watts answered with a driving two, and then he hit two free throws 11 seconds later. A minute after that, his assist set up Logan Moeller's 3 from the top of the key — and just like that, the lead was back to 35-23.

Watts had 18 points through three quarters, and then he tacked on his team's first eight points of the fourth quarter en route to a 43-30 lead, setting up the final charge by the Knights.