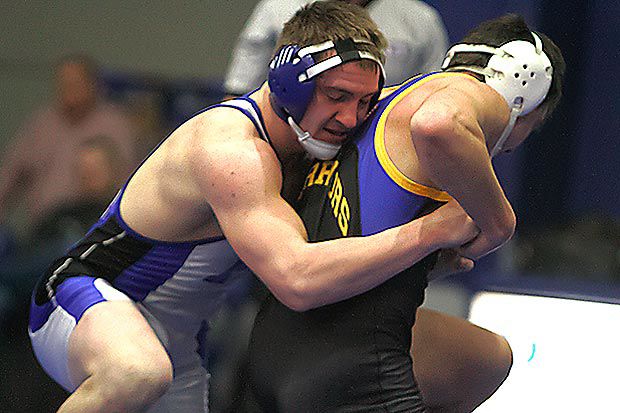 Pierce senior Brent Tinker capped Pierce’s run to the B-3 district title with his 12-7 win over Cooper Hancock of Wahoo in the 170-pound championship match. He was one of 10 Bluejays to qualify for state. 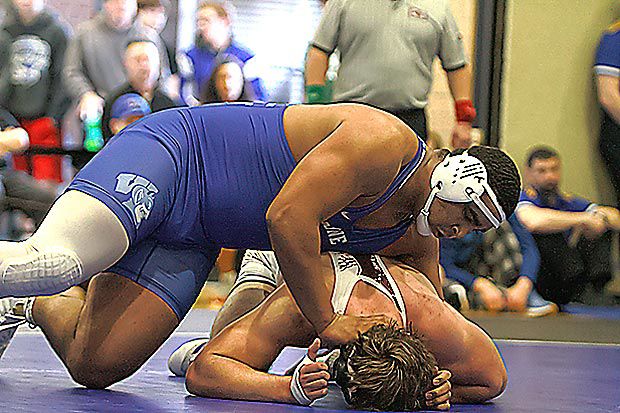 Wayne’s Mike Leatherdale tries to control top-ranked Remmington Gay of Arlington in their 285-pound championship match. Gay won the match on a 10-4 decision.

Pierce senior Brent Tinker capped Pierce’s run to the B-3 district title with his 12-7 win over Cooper Hancock of Wahoo in the 170-pound championship match. He was one of 10 Bluejays to qualify for state.

Wayne’s Mike Leatherdale tries to control top-ranked Remmington Gay of Arlington in their 285-pound championship match. Gay won the match on a 10-4 decision.

The Bluejays, a team that has largely been ignored by the Nebraska Scholastic Wrestling Coaches Association in its team rankings, put together a solid team effort to outlast three ranked teams and a solid Central City lineup to claim the B-3 district championship Saturday afternoon at Pierce High School.

The Bluejays qualified 10 wrestlers — trailing only Hastings’ 13 qualifiers in the Class B field — and crossed off another team goal with their 18-point win over runner-up Grand Island Northwest.

Bluejays coach Tyler Legate exhibited a worn-out sense of relief after the tournament as he praised his kids’ efforts on their home mat.

Pierce had just two champions among its six finalists in unranked Ashton Schweitzer (152) and fifth-ranked Brett Tinker (170), but Legate said his team did a better job of finishing its matches, regardless of the outcome.

“We did a better job of finishing better, which is something I hope we carry over into state,” he said. “I feel bad for the kids who didn’t make it, but I think we’re wrestling a lot tougher right now and just need to carry that into this next week.”

Schweitzer and Tinker were joined in the finals by sixth-ranked Brock Bolling (113), Jeremiah Kruntorad (138), Michael Kruntorad (145) and Dylan Kuehler (220), all of whom finished as runners-up.

Among the four Bluejays who survived the heartbreak round and reached the consolation finals were Jayden Coulter (120), Carter Jensen (132), Zander Schweitzer (160) and Parker Sackville (182). Sackville moved up from 160 pounds and battled his way to a third-place finish, and Jensen pulled off an unusual feat by becoming a three-time qualifier in three different classes. He qualified as a sophomore for Winside in Class D in 2018, earned a trip to state last year when Pierce was in Class C, and now will wrestle in the Class B division this week in Omaha.

The Bluejays outlasted a solid Northwest team that was led by top-ranked Grady Greiss, who pinned Pierce’s Kuehler in 1:27 in the 220-pound championship to lead the Vikings’ runner-up effort.

“I thought we performed really well,” Northwest coach Bryan Sybrandts said. “Getting seven into state was about what we thought we’d get. Our 106 was a fifth-seed and stepped up today and finished third, our 182 was a seventh and got to the finals, and our three champs all wrestled well so we were very happy with our results.”

Sybrandts praised the host Bluejays for coming through in what was a tough 11-team field that saw each of the top seven teams qualify no fewer than six wrestlers.

“Pierce just wrestled outstanding today,” he said. “They’re on fire right now and we just couldn’t catch them. They have a lot of good kids and a bunch of other teams had some great individuals, so we knew it would be a battle for the top three or four spots today.”

Only one of the five NSWCA top-ranked wrestlers failed to win district titles on Saturday. Jeremy McKee of Ralston, ranked No. 1 at 113 pounds, bumped up to 120 and finished as runner-up to Malachi Bordovsky of Wahoo, who pinned McKee late in the third period.

B-3 District at Pierce

Norfolk baseball and softball teams to start in June

Man sentenced to prison for strangulation

MADISON — A Norfolk man was sentenced to a prison term for assault by strangulation — second offense on Thursday in Madison County District Court.

Sermon summaries for Sunday, May 24

The motorcoach industry needs help getting off the struggle bus.