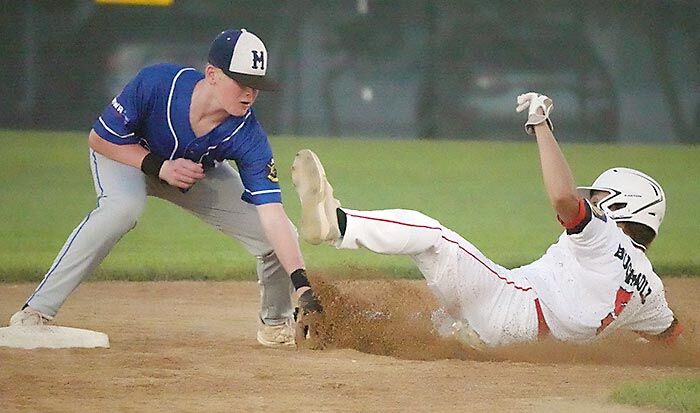 Nick Buchholz of Pender gets thrown out trying to steal second base against Malcom in Wednesday night's Class C state semi-final game in Creighton. 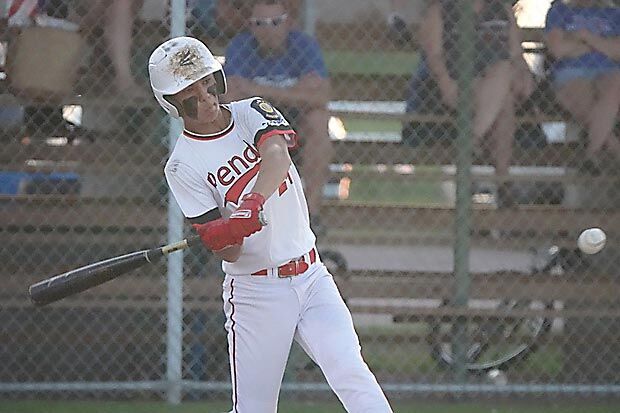 Aiden Beckman of Pender hits a line drive for a single during the Class C State Semi-Final against Malcom in Creighton. 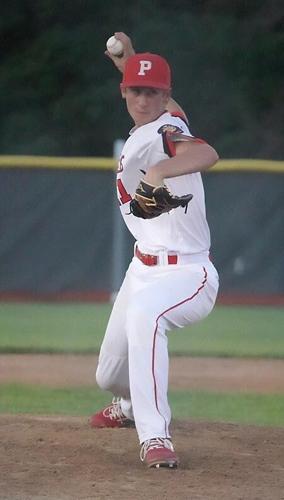 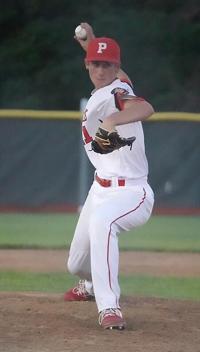 Tyler Olson of Pender throws a pitch against Malcom during the Class C State Semi-FInal in Creighton.

Nick Buchholz of Pender gets thrown out trying to steal second base against Malcom in Wednesday night's Class C state semi-final game in Creighton.

Aiden Beckman of Pender hits a line drive for a single during the Class C State Semi-Final against Malcom in Creighton.

Tyler Olson of Pender throws a pitch against Malcom during the Class C State Semi-FInal in Creighton.

Malcolm scored in every inning and capped off a 10-2 victory on Hayden Frank’s grand slam in the bottom of the fifth.

That kept Malcolm (23-1-2) the only undefeated team in the tournament entering Thursday’s 5 p.m. championship game against Imperial while also bringing Pender’s season to a close.

“They’re just good,” Pender coach Ron Williams said. “You can’t make many mistakes against them. They remind me a lot of Wayne. Wayne is a very solid team, and you’re going to have to play your best ball.

“(Malcolm) is very skilled, very talented. You can tell that. They have a big enrollment down there, and a lot of them play travel ball. That’s not a luxury a lot of teams up here have had. All of that builds.”

Since entering the ninth inning of its tournament opener against Wakefield in a scoreless deadlock, Malcolm has put up 32 runs over 16 innings.

Carson Frank went 4 for 4 while Hayden Frank’s blast over the fence in left field ended the contest via the eight-run mercy rule with one out in the fifth.

“I thought our pitching was fine,” Williams said. “We just had a couple of errors that hurt you. It’s always about the specific point and time. An error with nobody on generally won’t hurt you. But when there are and you get some walks, that will hurt you.”

Trailing 5-0, Pender plated a pair of runs in the top of the fourth. Tyler Olson singled and went on to score on a wild pitch while Alex Roth doubled and came home on an Owen Kneifl sacrifice fly.

But Pender couldn’t find a way to generate enough offense to remain alive for the last day of the season.

“I’m proud of these boys,” Williams said. “We’re trying to continue the legacy of getting to state. In the last 12 years, I think we’ve done that at least 10 times between the two teams (Juniors and Seniors). If Seniors get there this year, it’ll be the fourth time in the last 11 that we’ve both been there.”

Pender (18-7) lost only to the two finalists in the state tournament. It also suffered two defeats during the regular season to Wayne, which finished third in Class B.

“Four of those losses against those teams — who is going to complain?” Williams said. “Not me.”

MADISON — A former bookkeeper at Environmental Services in Norfolk who embezzled thousands of dollars from the company said on Wednesday that she should only have to pay her former employer less than half of what prosecutors are asking for.

MADISON — A woman who fired several shots in the direction of another woman in April pleaded guilty to a trio of charges on Wednesday and now faces up to a 26-year prison sentence.

Atkinson artist spearheads campaign to ‘lift’ the town that raised her

ATKINSON — Megan Mitchell brought an idea for an interactive public art collection to her hometown, and the idea has really taken off.

WEST POINT — All is fair in love and war and obtaining bandwagons — and love for bandwagons during a fair.

The meditations of Marcus Aurelius

Marcus Aurelius was the Roman Emperor from March 7, 161, until his death on March 17, 180. He lived and died over 2,000 years ago, but his legacy lives on in “Mediations,” a series of 12 notebooks in which he recorded his thoughts as he practiced the art of constant self-examination. He may …

A 25-year-old man from rural Battle Creek was charged on Friday with six crimes in connection with allegations that he sexually abused a pair of teenagers over a several-month period and paid them to keep quiet about it.

MADISON — A woman who illegally operated a dog kennel southwest of Madison and lived in a filthy home with two kids was sentenced to a short jail term on Monday.

Do you think the Inflation Reduction Act will lower inflation?