One might think COVID-19 funds create a bonanza, but the situation is more complicated than that 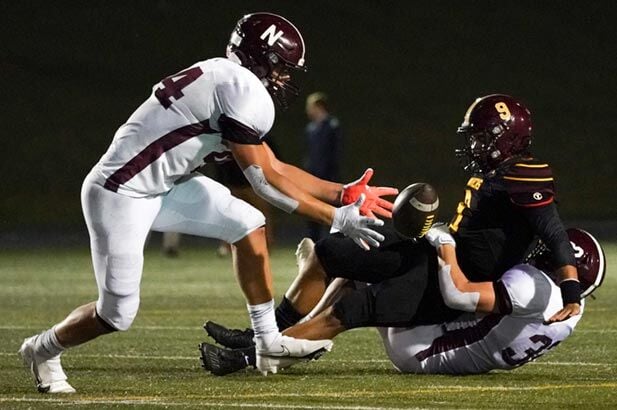 Brandon Aguirre (32) hits the Papillion La Vista quarterback Nick Chanez and pops the ball into the air for Jackson Bos to catch and run upfield Friday night in Papillion. 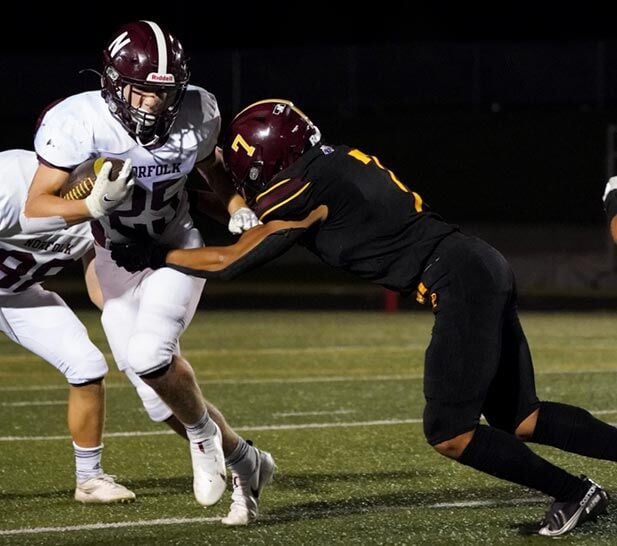 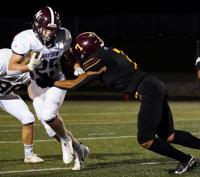 Rowdy Bauer of Norfolk looks for running room as he gets tackled by Keynan Cotton of Papillion La Vista Friday night. 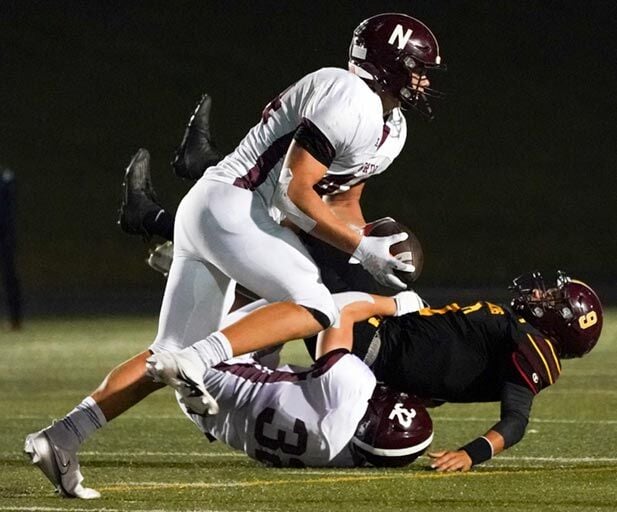 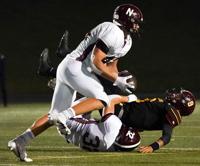 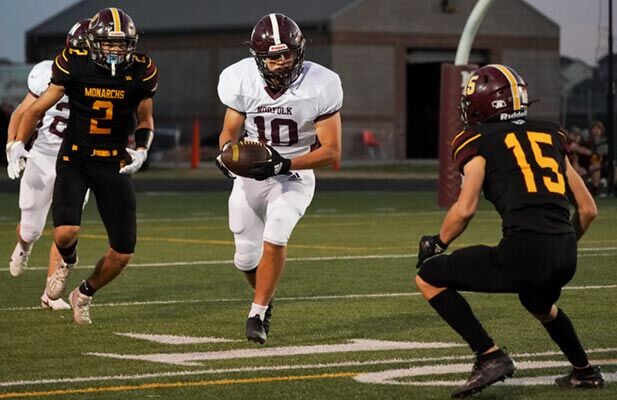 Jacob Hoffman of Norfolk looks for an opening after making an interception Friday night in Papillion. 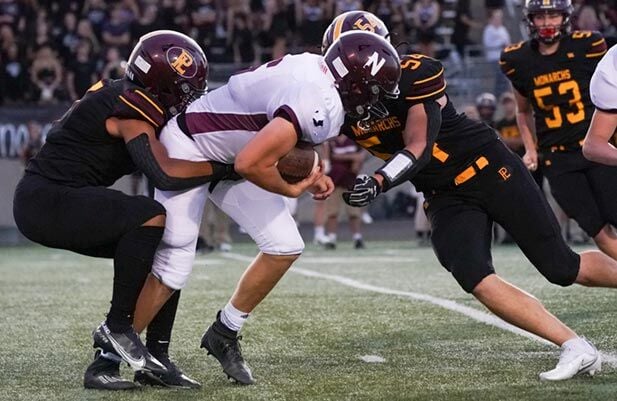 Cale Wacker of Norfolk gets brought down by Tyson Money (left) and Hunter Foral of Papillion La Vista after making a reception during Friday night's loss in Papillion. 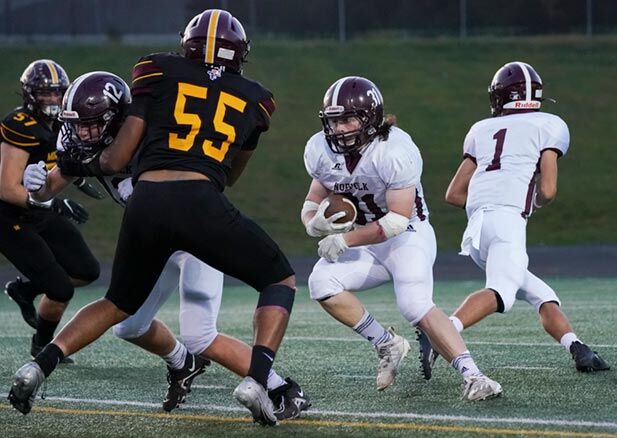 Payson Owen looks for a hole after getting the handoff from Kaden Ternus Friday night in Papillion.

Brandon Aguirre (32) hits the Papillion La Vista quarterback Nick Chanez and pops the ball into the air for Jackson Bos to catch and run upfield Friday night in Papillion.

Rowdy Bauer of Norfolk looks for running room as he gets tackled by Keynan Cotton of Papillion La Vista Friday night.

Jacob Hoffman of Norfolk looks for an opening after making an interception Friday night in Papillion.

Cale Wacker of Norfolk gets brought down by Tyson Money (left) and Hunter Foral of Papillion La Vista after making a reception during Friday night's loss in Papillion.

Payson Owen looks for a hole after getting the handoff from Kaden Ternus Friday night in Papillion.

Unfortunately, the Monarchs still had enough size, speed, and strength to shut out the Panthers 51-0.

“They looked like that on film, and they didn’t disappoint,” Panthers coach Chris Koozer said. “Their kids are big, they’re fast, they’re strong.

“We’ve got to get stronger, and we’ve got to learn to play faster,” he said. “There was a difference in speed and size. Some of the size you can’t make up, but we’ve got to train that way in everything we do to put ourselves in position to be competitive with teams like this.”

Papillon-LaVista scored its only first quarter points on a pair of special teams plays. First, a blocked punt by Jayson Bottorff that De’Andre Prucha scooped up and dashed 18-yards with for a touchdown that provided a 6-0 lead after a failed point-after-touchdown pass play, then added a 37-yard field goal by Caleb Walker to go up 9-0.

But the Monarchs’ second period was inconsistent due to largely self-inflicted errors, including 45-yards of penalties and two turnovers, although Norfolk was unable to capitalize on those mistakes.

A 10-yard punt gave Papillion-LaVista a possession on the Panthers’ 30, which produced a first down on the Norfolk 17 before back-to-back penalties negated a touchdown pass and, instead, ended with an interception by the Panthers’ Jacob Hoffman.

However, after another Norfolk punt that P-LV returned to the Panthers’ 27, the Monarchs’ Payton Prestito scored from the two to increase the lead to 16-0.

Norfolk’s best chance for points came two plays after another P-LV penalty took a 28-yard touchdown pass off the scoreboard when Norfolk’s Brandon Aguirre, a senior playing his first season of football for the Panthers, forced a fumble with a hit on the Monarchs’ quarterback Nick Chanez, which Jackson Bos gathered in and carried 37 yards to the P-LV 18-yard line.

Then, however, it was Norfolk’s turn to waste an opportunity — losing 10 yards on consecutive five-yard penalties for movement prior to the snap before losing seven more yards when the Monarchs’ Ayden Wieser sacked Norfolk quarterback Kaden Ternus, ending the threat and leaving P-LV’s 16-0 advantage in tact at halftime.

“Our mistakes have been our issue all year; we constantly make mistakes and constantly put ourselves behind the sticks,” Monarchs coach Tim Williams said. “It’s something that we’ve got to fix, and we preach it every single day. We had two touchdowns called back, and on one of those plays we scored on we didn’t even run the right route.

“At halftime we just kind of settled them down, telling them they really didn’t prepare themselves very well for that first half and they’re better than this,” he said. “The second half we came out and did what we’re supposed to.”

What the Monarchs did the second half was dominate play, attacking the line of scrimmage defensively and frequently penetrating into the Norfolk backfield — stymying the Panthers’ offense while also forcing an interception and fumble, then scoring on both Norfolk mistakes.

After rushing for -8 yards in the first half on 12 carries, Norfolk duplicated the total on nine rushes in the second half. Likewise, the Panthers’ passing game struggled with protection against the P-LV defense, with Ternus finishing his night completing 5 of 9 passes for 27 yards, while sophomore back-up Connor Hoffman completed 2 of 9 for 19 yards with two interceptions in the fourth quarter.

“We couldn’t throw to get them away from the line of scrimmage; that’s what you need to do,” Koozer said. “You have to throw to make them play honest. If they’re not afraid of the passing game then they can play like that and you’re out-numbered when they bring five, six, or seven.”

Papillon-LaVista, meanwhile, scored five second-half touchdowns to close out its 51-0 victory. Four of those were on the ground, including a Prestito 7-yarder, a 20-yard effort by Walker, a 53-yard scamper by Chanez up the sideline — after Jordan Barrientos was spun around while looking for an opening outside, saw Chanez, and pitched the ball to him — before Barrientos scored his own touchdown from 25-yards out. The Monarchs’ Luke Lindenmeyer also hauled in a 21-yard touchdown pass from Chanez.

“Sometimes people get caught up in the scoreboard, but does it help us to play better teams like that?” Koozer said. “Will we play faster next week because of this experience? Probably. To practice against your junior varsity players during the week, you feel like you’re phenomenal, but you can’t simulate this sort of speed.”

New look on the way for Snyder convenience store

SNYDER — The Snyder Mini Mart has a new owner.

YMCA thanks members for making it second biggest in state

Gators turn away GACC in C2-4

WISNER — It's postseason volleyball time across the state.

Mandates are not necessary

The vaccine isn't in question, the government is

Our country seems to be divided over nearly every issue and the COVID vaccine is certainly no exception. Individuals on both sides cling to their convictions with quasi-religious zeal. However, most of us are content to let our beliefs fall somewhere between, “everyone in the country must ge…