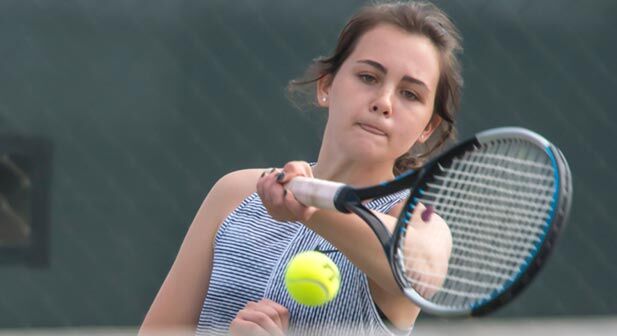 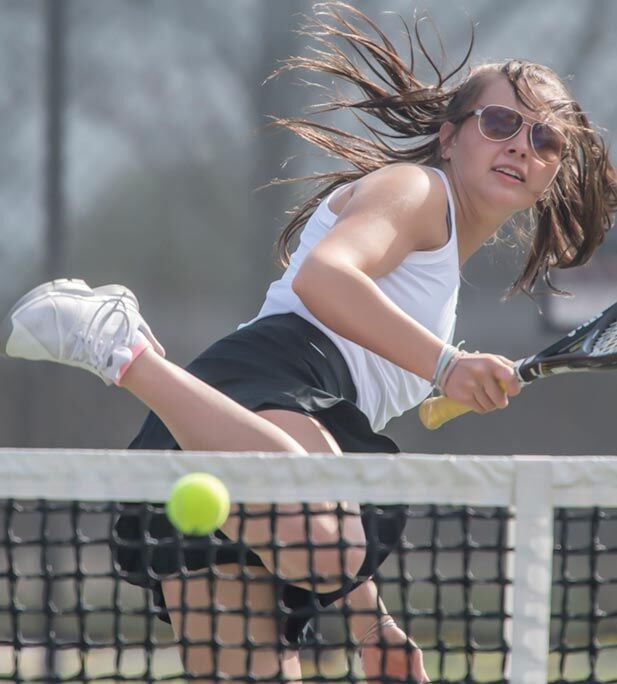 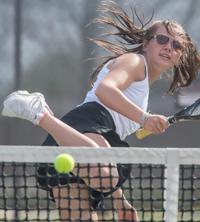 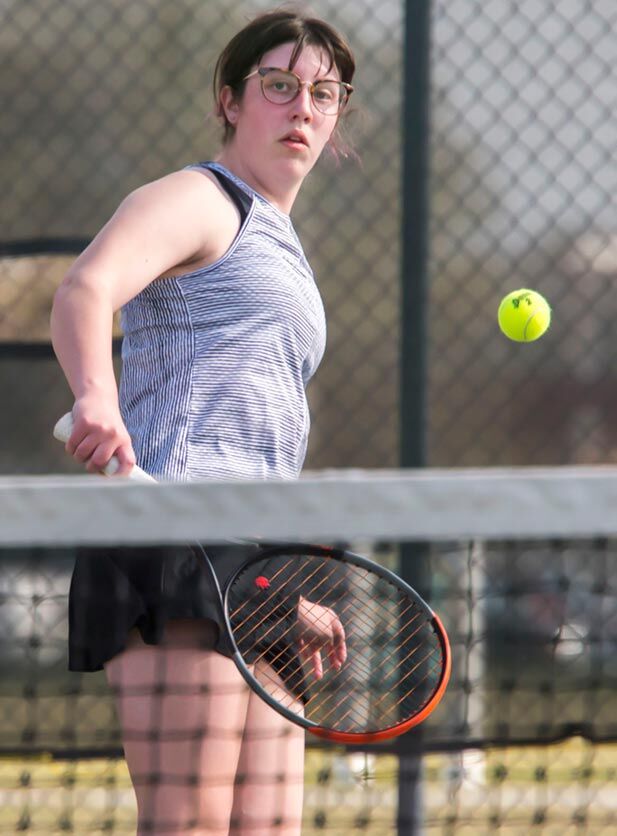 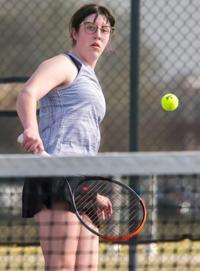 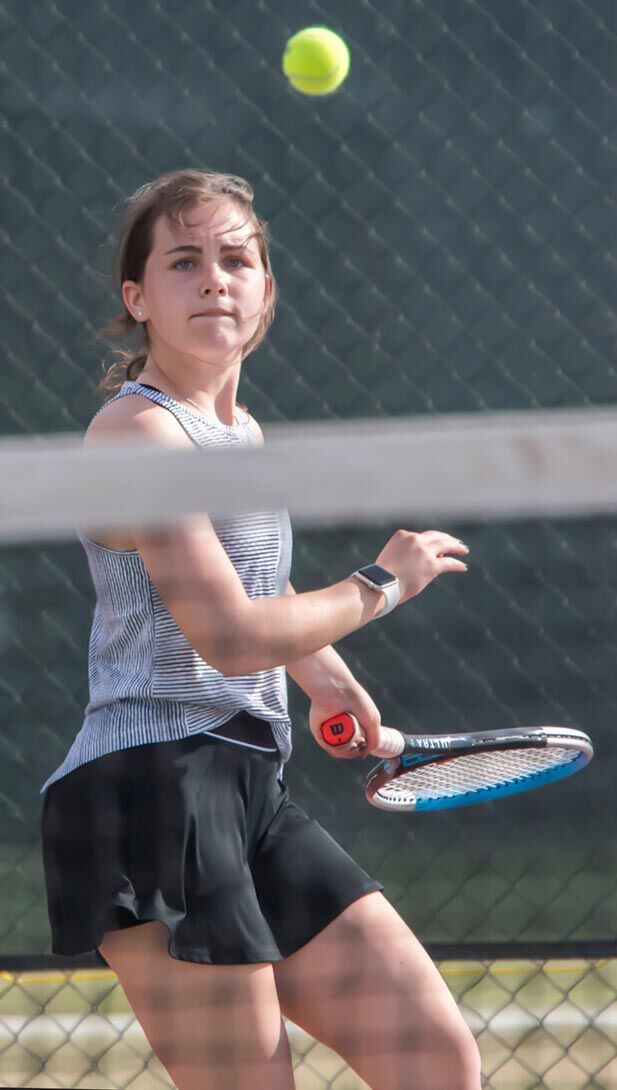 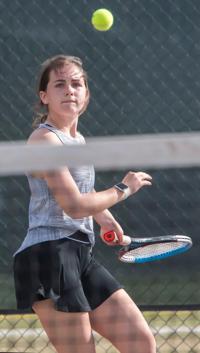 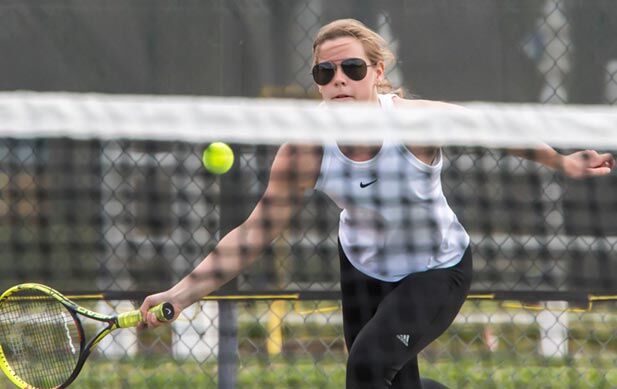 Lincoln East finished second in the Class A state tennis tournament in 2019 and brought a handful of those players to Norfolk on Tuesday to take on the Panthers in dual action.

Although the Spartans defeated Norfolk 7-2, Panthers coach Kelly Krueger didn’t have to look too far to notice the improvement his squad made from just a week ago.

“The varsity score was exactly the same as last week’s loss to Columbus, but we played so much better today and against better competition,” Krueger said. “We lost two very close matches 8-6 and, overall, really seemed to be over the first-match jitters we had in Columbus.”

Krueger said that as a freshman two years ago, Reynolds played in some varsity doubles matches early in the season, but “lacked confidence even though she had good strokes.”

“She’s got a lot more confidence this year; by far, she’s my most consistent player,” Krueger said. “She plays so much in the offseason, and her fundamentals are solid.”

“Right now, she’ll play singles and doubles in duals, but when we go to tournaments —where she can only play one or the other — I’m thinking she’ll play No. 1 doubles,” he said. “She prefers doubles, and I think she’s probably a better doubles player. Right now her partner is Kyla Robinson, and that pairing is head and shoulders above all the other combinations I’ve tried in practice.”

Lincoln East won the other four singles matches and swept the three doubles matches as well, including the No. 1 doubles pairing of Reynolds and Robinson, which the Spartans won 8-4.

“I do like doubles, having another person there, and I think my style of play — I like to aim for the alleys — works well in doubles,” Reynolds said. “I think we played very good on lots of the points; we moved very well and collaborated. Kyla is very aggressive at the net and can get to most balls.”

“Being left-handed, I have a spin on my serve that is harder for people who are right-handed to face; that helps us a lot,” she said. “Also, when I’m playing back and hit my forehand crosscourt, it’s to their backhand, which is usually their weaker side.”

Reynolds said she thinks her doubles partnership with Robinson has made rapid improvements in just their second outing.

“I think we’ve improved a lot, even from last Tuesday’s doubles,” she said. “I think we did a lot better today. I don’t think it’s necessarily about the score, but if we play better, then we’ve achieved something.”

Kalin’s victory in No. 2 singles earned praise from Krueger as well.

“Karly has won both of her singles matches this season; she simply hustles her way through the matches,” he said. “Technique wise, Karly’s tennis strokes are not the most fluid, but she uses her athleticism to her advantage and literally outhustles her opponent.”

Lincoln East’s wins in the three varsity doubles matches revealed the Panthers’ weakness in that area, which Krueger said would be an area of emphasis in practice.

“From the matches I saw today, we are improving but still have a way to go to become more competitive in our doubles matches,” Krueger said. “Lincoln East really controlled all of the doubles matches, and we have to work on our deficiencies and get a better grasp on that part of the game.”