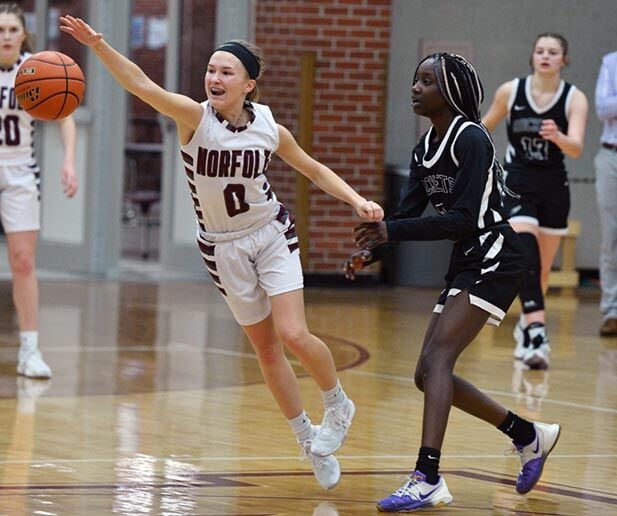 Nyathak Gatluak of Lincoln Northeast looks on as Nealy Brummond of Norfolk reaches for a loose ball during Thursday night's game in Norfolk. 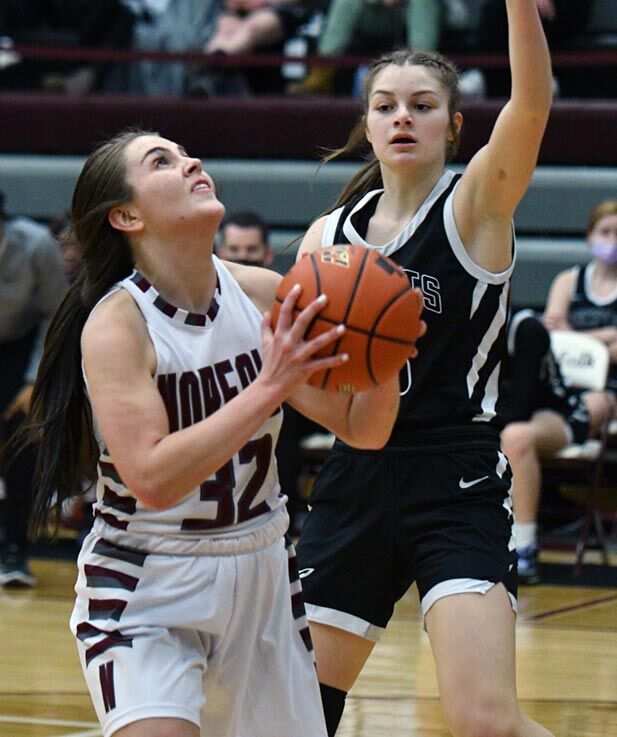 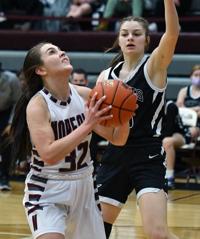 Chelsea Strom of Norfolk looks to the hoop against Kynlee Uher of Lincoln Northeast during Thursday night's game in Norfolk. 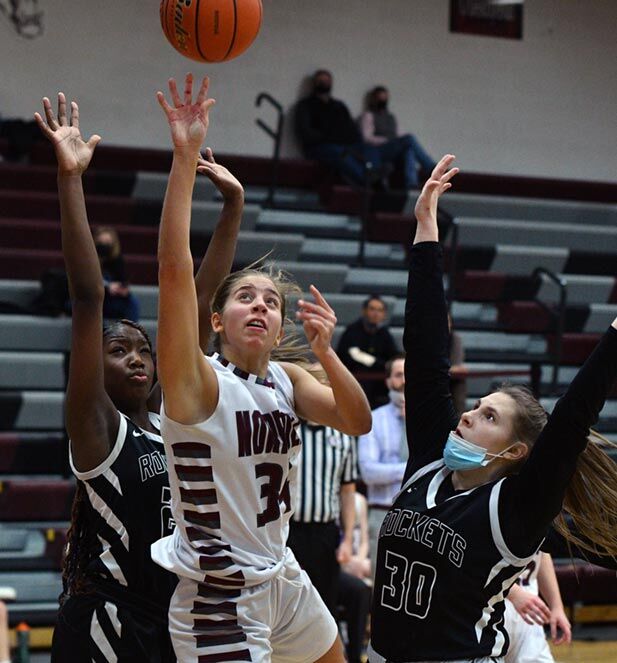 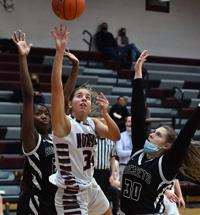 Hailey Kleinschmit of Norfolk puts up a shot between Doneelah Washington and Jaidyn Weinberger of Lincoln Northeast during Thursday night's game in Norfolk. 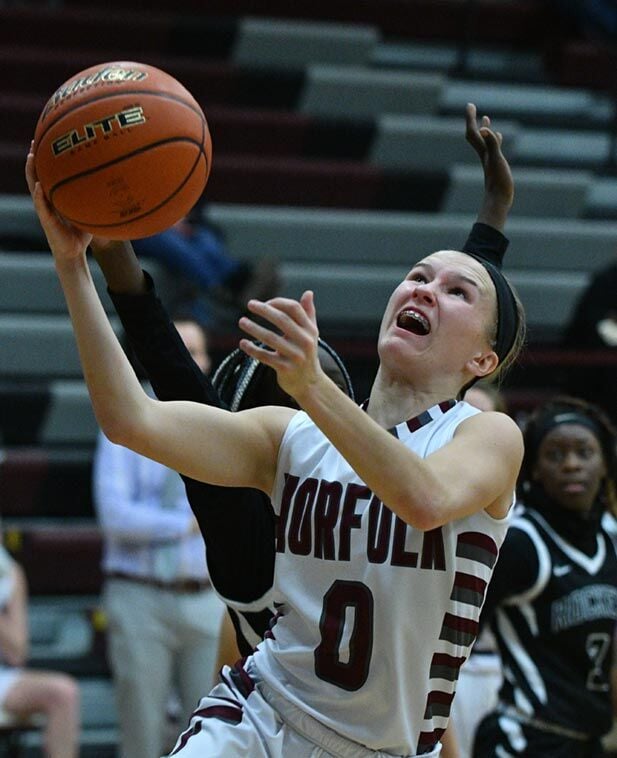 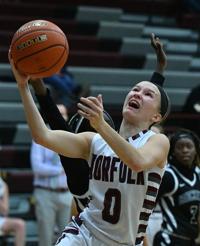 Nealy Brummond of Norfolk drives to the hoop during Thursday night's game against Lincoln Northeast in Norfolk. 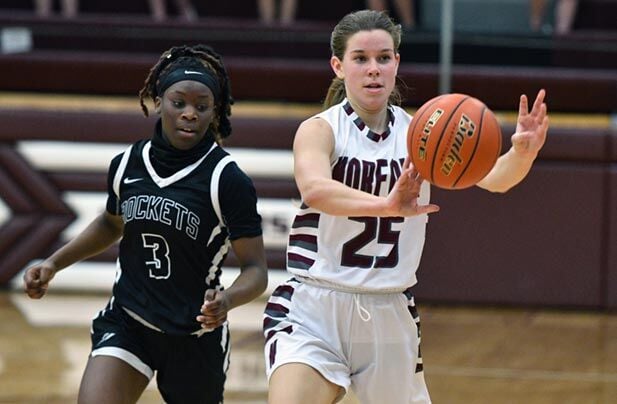 Karly Kalin of Norfolk makes a pass while guarded by A'Lyana Jones of Lincoln Northeast during Thursday night's game in Norfolk.

Nyathak Gatluak of Lincoln Northeast looks on as Nealy Brummond of Norfolk reaches for a loose ball during Thursday night's game in Norfolk.

Chelsea Strom of Norfolk looks to the hoop against Kynlee Uher of Lincoln Northeast during Thursday night's game in Norfolk.

Hailey Kleinschmit of Norfolk puts up a shot between Doneelah Washington and Jaidyn Weinberger of Lincoln Northeast during Thursday night's game in Norfolk.

Nealy Brummond of Norfolk drives to the hoop during Thursday night's game against Lincoln Northeast in Norfolk.

Karly Kalin of Norfolk makes a pass while guarded by A'Lyana Jones of Lincoln Northeast during Thursday night's game in Norfolk.

The Norfolk High girls basketball team had a couple of circumstances to overcome before finishing its regular season with a 43-31 win over Lincoln Northeast.

First of all, the Panthers had to bounce back from a 30-point loss at Lincoln East the night before, then overcome an early 8-2 Rockets lead and, finally, hold off two late Northeast comeback attempts.

“I was proud of our girls for bouncing back today,” Norfolk coach Jared Oswald said. “Then, not having a good start and being down 8-2, it would have been real easy to get into a hole and let them take command of the game. I thought our girls did a good job of battling back in the second quarter.”

The Panthers began to execute their offense against the Rockets’ man-to-man defense in the second quarter, getting the ball inside with the help of pick-and-rolls from the wing.

Hailey Kleinschmit, who led Norfolk with 13 points, scored on a drive to begin the Panthers’ second-quarter run, and then a sharp pass from Chelsea Strom found Makenna Skiff open on the block for a basket.

After Erin Schwanebeck nailed a 3 from the point, the junior also assisted Strom, who was rolling to the basket after setting a screen on the left wing. Strom’s basket finished the 10-3 run and gave the Panthers a 12-11 lead — their first of the game.

Although Nyathak Gatluak’s second 3 of the game returned Northeast to a 14-12 advantage to open the third quarter — and with the Rockets changing to a zone defense to disrupt the Panthers’ offensive effectiveness — Norfolk immediately began to get the ball inside.

“I thought we did a decent job of figuring out how to get the ball to the middle of the zone,” Oswald said. “Against any zone, that’s a key, but once we got the ball there, we were able to make some plays.”

After Agdaly Sanchez answered Gatluak’s 3 with her own trey from the corner, Strom turned a Norfolk steal into a fast-break layup, and a pair of offensive rebounds by Kleinschmit resulted in 3 points with another by Schwanebeck ending a 10-0 run with the Panthers leading 22-14.

In the fourth period, Lina Le’s 3 cut Norfolk’s advantage to 24-19, but with the Rockets back to playing man defense, the Panthers again scored eight straight points to build their largest lead of the game of 34-20.

Nealy Brummond scored on a drive followed by a Kleinschmit assist to Strom on another pick-and-roll. Kleinschmit added a pair of free throws before Brummond grabbed a loose ball in the lane and scored.

“I thought our execution of our pick-and-roll again in the fourth quarter was really the key, because we were able to separate,” Oswald said. “Hailey is such a weapon inside with her length and her playmaking ability. With her calm demeanor, she makes plays handling passes that are not easy passes to catch. She’s not only able to catch the ball, but is able to gather and turn it into something, which is not an easy skill.”

Northeast’s first comeback took advantage of the Panthers’ nearly three-minute scoring lapse, as the Rockets outscored Norfolk 9-1 to trail 35-29 with a minute and 20 seconds left to play.

“We’ve got to handle those situations better; we had a couple decisions that were poor,” Oswald said. “That’s something we’re going to have to do a better job of.”

The teams traded baskets, giving Northeast one final opportunity to reduce its deficit to fewer than six points, but the Panthers converted 8 of 10 free throws in the closing seconds to close out a 43-31 win.

Norfolk was able to overcome 28% field goal shooting with an active, trapping 1-3-1 zone defense. As a result, the Rockets finished the game making 12 of 39 shot attempts.

“The 1-3-1 has been good to us at times, and I think it was kind of a momentum change for us going to it in the second quarter,” Oswald said. “I didn’t think they killed us with their offense in the first quarter, but we needed something to get our transition going.”

The victory allows Norfolk to even its regular-season record at 11-11. The Panthers are seeded No. 3 in the A-3 district and will prepare for a game against second-seeded Kearney on Tuesday in Kearney.

“It’s a two-game season now; it’s about going to Kearney and playing well,” Oswald said. “It’s a decent matchup for us; they beat us once, but we were missing some starters.”

There’s another tool to keep hands and toes warm, relieve stress or to help keep cool while operating machinery on a hot summer day.

WEST POINT — A 31-year-old Emerson man who previously served time in prison made his first appearance Wednesday in Cuming County Court on five charges related to an attempted burglary in Beemer.