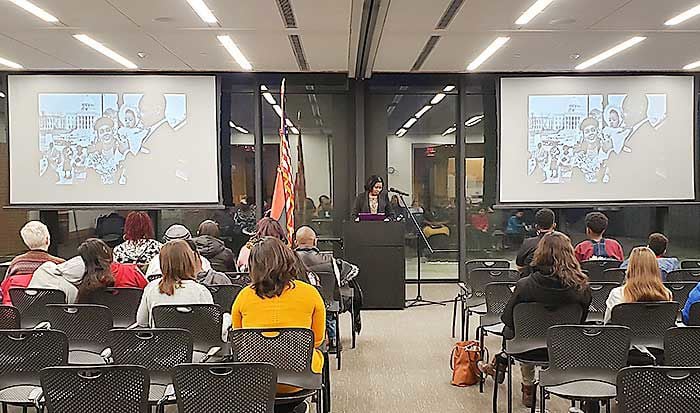 TAMIRA VOLK, one of the organizers of the Pan Africans of Northeast Nebraska, begins the group's inaugural celebration of Martin Luther King Jr. at the Norfolk Public Library. 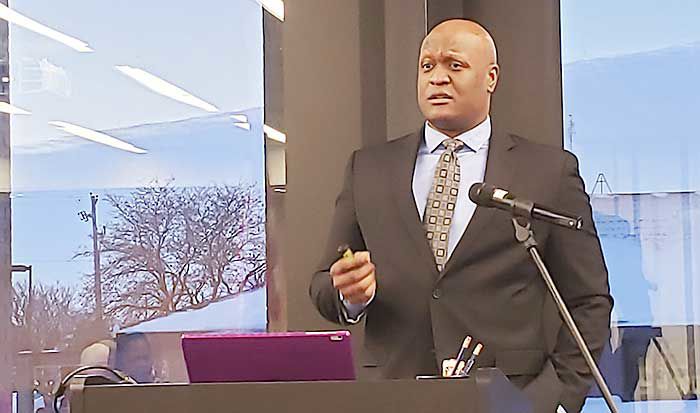 BARRY THOMAS, the director of equity and diversity at Omaha Public Schools, was invited as the keynote speaker for the Martin Luther King Jr. Day celebration.

TAMIRA VOLK, one of the organizers of the Pan Africans of Northeast Nebraska, begins the group's inaugural celebration of Martin Luther King Jr. at the Norfolk Public Library.

BARRY THOMAS, the director of equity and diversity at Omaha Public Schools, was invited as the keynote speaker for the Martin Luther King Jr. Day celebration.

The event at the Norfolk Public Library featured keynote speaker Barry Thomas, the director of equity and diversity at Omaha Public Schools. Thomas presented about his upbringing, national miseducation and how to put theories introduced by key figures such as Martin Luther King Jr. into practice in public schools.

“African-Americans were not given true education to find out who they were, but it was how America portrayed them to be,” Thomas said. “I got to Omaha in 1991, where there was a lot of gang violence and drug addiction spreading at that time. I just assumed the neighborhood I settled in would be poor...the people would be violent — I became what the world was telling me to be.”

Thomas received his bachelor’s degree from Wayne State College and two master’s degrees from Doane University. He’s also a board member of the National Association for the Advancement of Colored People (NAACP) Omaha branch.

In his speech, he described Martin Luther King Jr.’s Poor People’s Campaign, which tried to combat racism, poverty and militarism.

“He wasn’t popular when he died,” Thomas said. “But today we all love him. Not everyone was burning up their cities when he passed.”

He also related 1968 events to the present day and how biased education exists in some classrooms. For example, some U.S. textbooks pick and choose which facts to print, misinforming students, he said.

The Pan Africans of Northeast Nebraska began in November 2018, said Tamira Volk, one of the group’s organizers.

“We decided to make a group for Pan African diaspora and all of our allies,” Volk said. “We wanted to have a voice in our community and let people know the African diaspora are here...we can’t be out here sleeping, because once you close your eyes, there’s someone out there waiting to take your rights away.”

Monday’s event included prayers from Jerome Wilson, pastor of the Macedonian Missionary Baptist Church in Norfolk. The celebration also featured Vickie Young, president of the NCAAP Omaha branch, who recounted a controversial event that brought her and other NCAAP representatives to Norfolk.

In 2014, a Norfolk resident presented a float at the Fourth of July parade that was interpreted by some as racist, according to a previous Daily News article. The float depicted an outhouse on the back of his pickup that read “Obama’s presidential library” along with a mannequin that some thought represented Obama, though the Norfolk man said it represented himself.

“When we traveled (to Norfolk), we met the most amazing people who wanted to address the issue,” Young said. “I want to believe that today, with support from Mayor Josh (Moenning) and help from Tamira, we not only protecting civil rights but have a place that all nationalities feel safe.”

Volk ended the celebration with advice to parents and the public on how to be vigilant in the civil rights movement and public education.

“Advocate for children, ask about guidelines, talk to the superintendent or principal,” Volk said. “Don’t let information go in one ear and out the other. Teach children the truth, because that’s how we will change the world.”