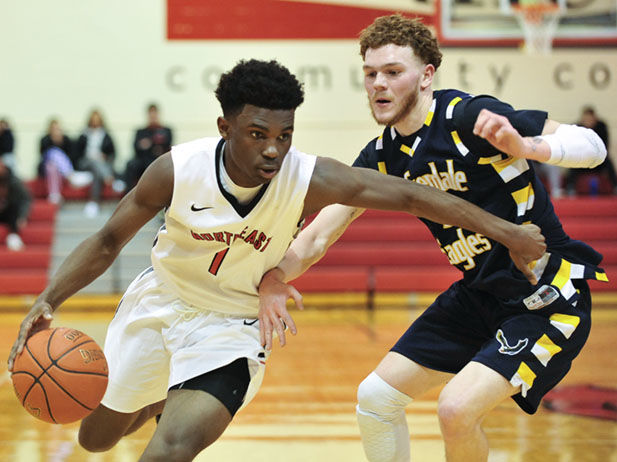 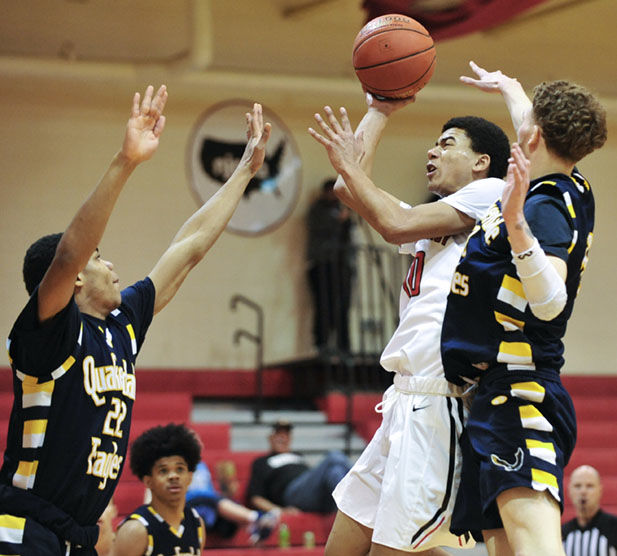 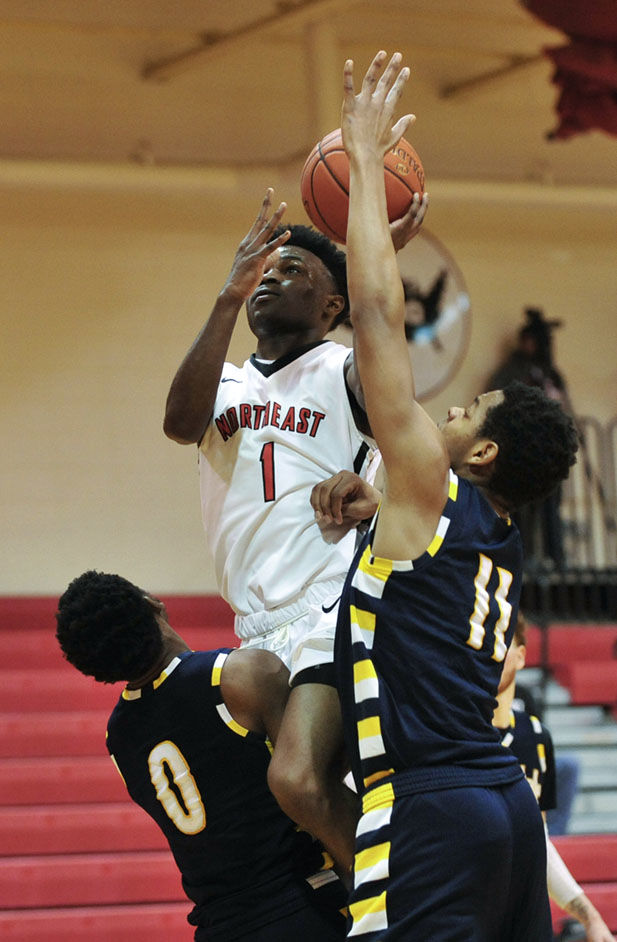 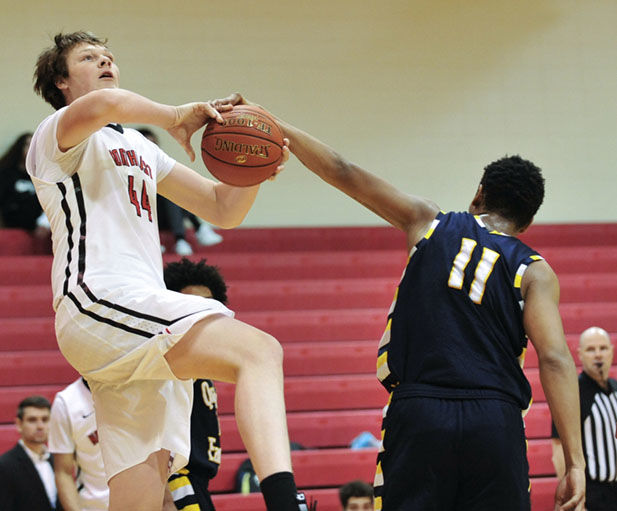 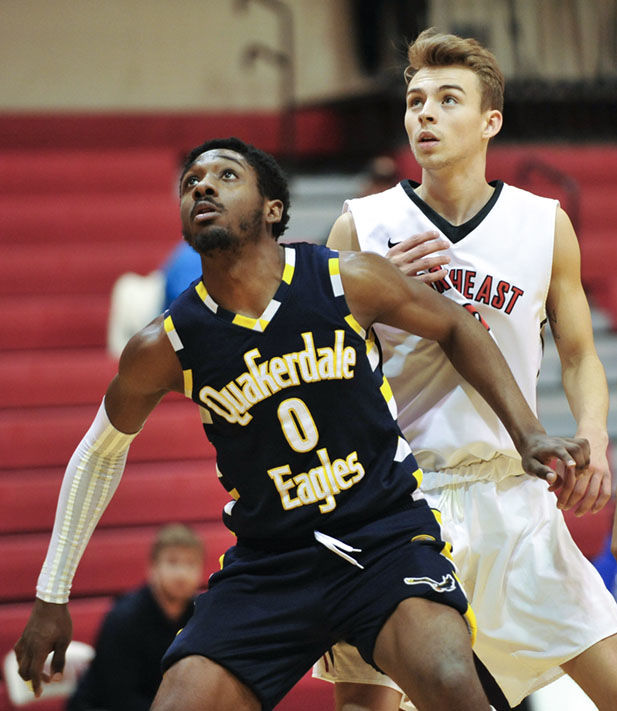 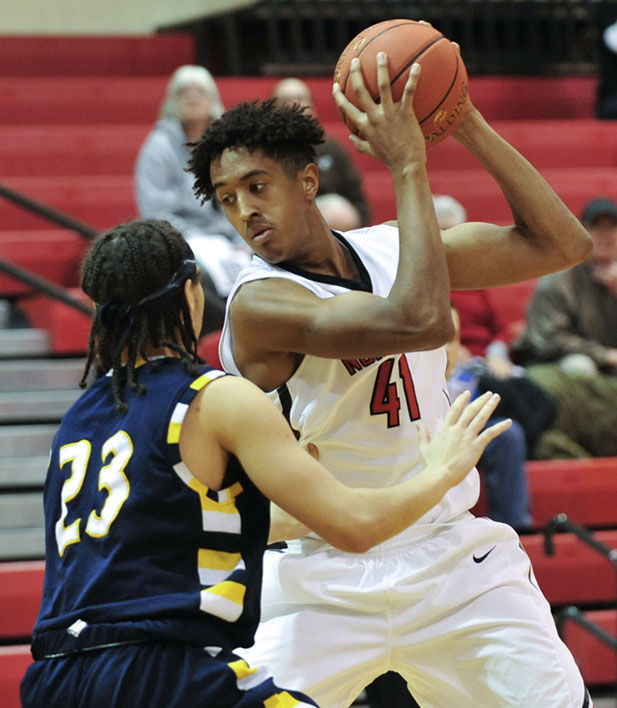 The Hawks were a bit slow out of the gate offensively, but ultimately, with the record-setting scoring of Emmette Page, Northeast Community College blasted Quakerdale Prep Academy 101-64 on Wednesday night at the Cox Activities Center.

After trailing 6-1, the Hawks knotted the score at 11 on a Page 3, then, when the Eagles retook the lead by outscoring Northeast 8-3 during the next three minutes, Page once again returned his team to the lead with a three-point play — at the same time sparking a 14-0 run that established a 29-19 advantage.

Moments later, Page drained a 3 from the right wing that established the sophomore from Crystal, Minnesota, as the Hawks’ all-time career scoring leader, surpassing the 18-year-old record held by Ty Graham of 1,062 points. Page now has at least two more games to increase his total of 1,072.

Northeast finished the half by outscoring Quakerdale Prep 17-5 to take a commanding 47-26 lead and then continued to batter the Eagles offensively during the first three minutes of the second half to push the lead to 30 points at 58-28 before cruising to the 101-64 win.

Page, who also leads the Iowa Community College Athletic Conference in scoring while averaging 22.4 points per game, finished the game with 26 points.

“Coach (assistant, Josh) Clark told me about halfway through the season that I was on pace to break the record, so once he told me that, I had it in the back of my mind ever since and just went with it,” Page said. “It’s a blessing (to break the record). I can’t believe it, because in high school I wasn’t even able to get to 1,000 points. So, shout out to my teammates along the way, and my coaches for putting me in this position to succeed.”

Page said his scoring ability has improved with his understanding of the game, and he’s continuing to receive interest from schools who are recruiting him.

“I’ve always been able to score, but coming to the next level, I just understand the game of basketball more, knowing how to slow it down, understanding when to go and when to (hold back),” he said. “I’ve got a lot of interest from schools; I recently was offered by Montana State. I’m just waiting until everybody comes into the picture, and (in the meantime) I’ll just keep working.”

Northeast coach Dan Anderson described Page as “a good player for us, one who has scored a bunch of points for us.”

“He hasn’t played with the supporting cast that some of the other (scorers) here have; he’s had to do more, and he has the ability to do more,” Anderson said. “He can change directions, change speeds, get to the basket. He does a lot of good things offensively, but he also rebounds and plays good defense.”

Another player who had a big night for the Hawks was freshman Michael Anderson, who finished the night with a triple-double of 12 points, 10 rebounds and 10 assists.

Dennis Herrea, a freshman from O’Neill taking advantage of an opportunity for extended playing time, also made his mark. Herrea made 5 of 7 shots, including 3 of 5 3-point tries. Two came on bank shots, with the second sending the Hawks’ point total over the century mark as Herrea recorded 13 points during a four-minute time span.

“It’s like (the movie) ‘Hoosiers’ where the guy comes off the bench and scores a bunch of points,” Anderson said with a chuckle. “He comes to practice every day and works really hard. He gives good effort, so tonight it’s like the basketball gods rewarded him with his shots going in.”

Northeast improves to 13-16 and will finish the regular season on Saturday when the Hawks will host Southeastern Community College of Burlington, Iowa, in a 7 p.m. contest.