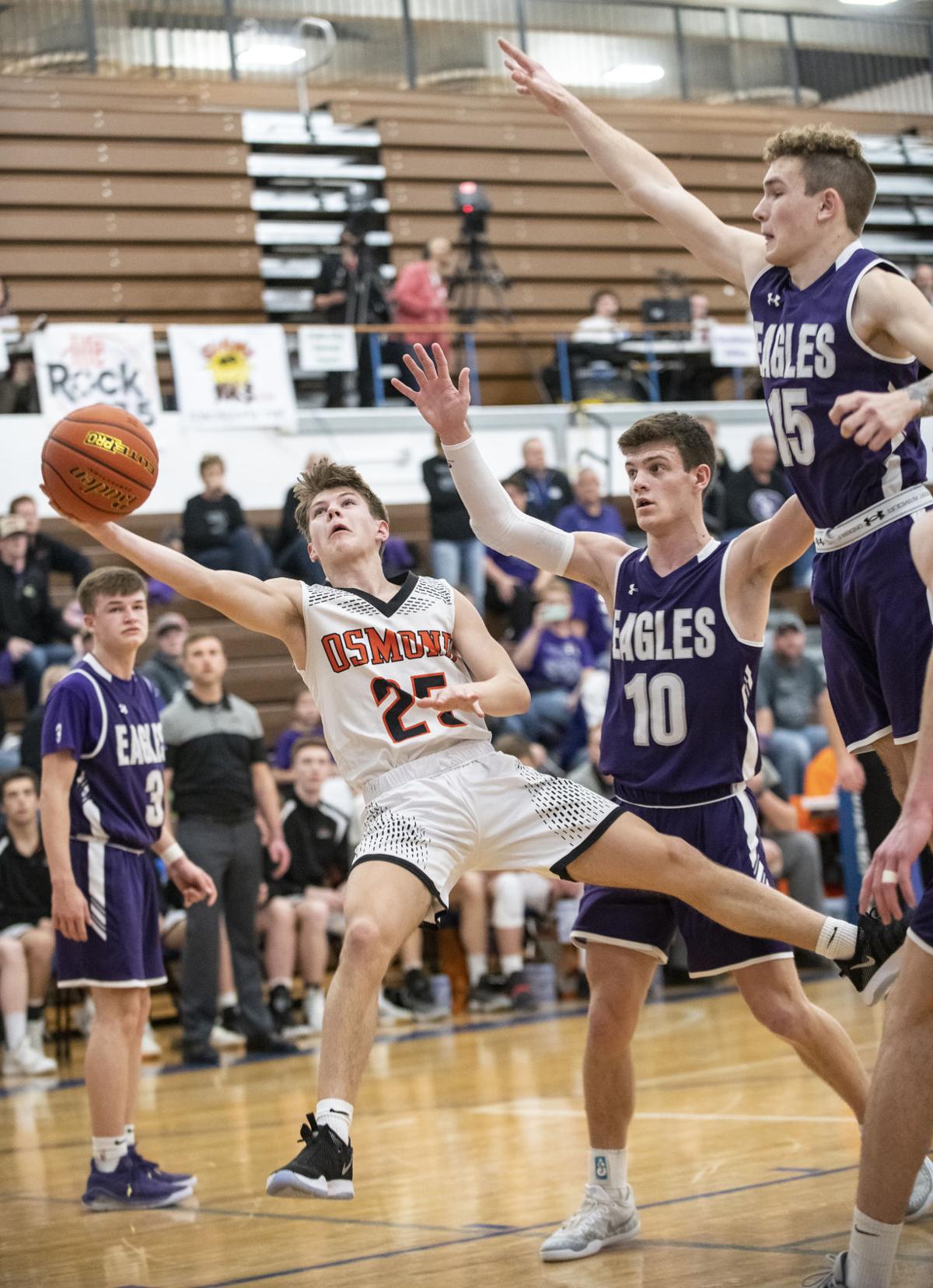 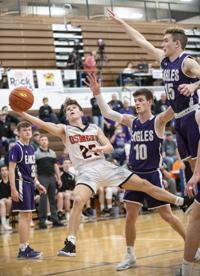 Mike Anderson/Correspondent Lincoln- Graysen Schultze of Osmond tosses up the ball while falling to the ground while being defended by Jaden Quinn (10) and Best Draden of Southern Valley during Osmond's loss Thursday. 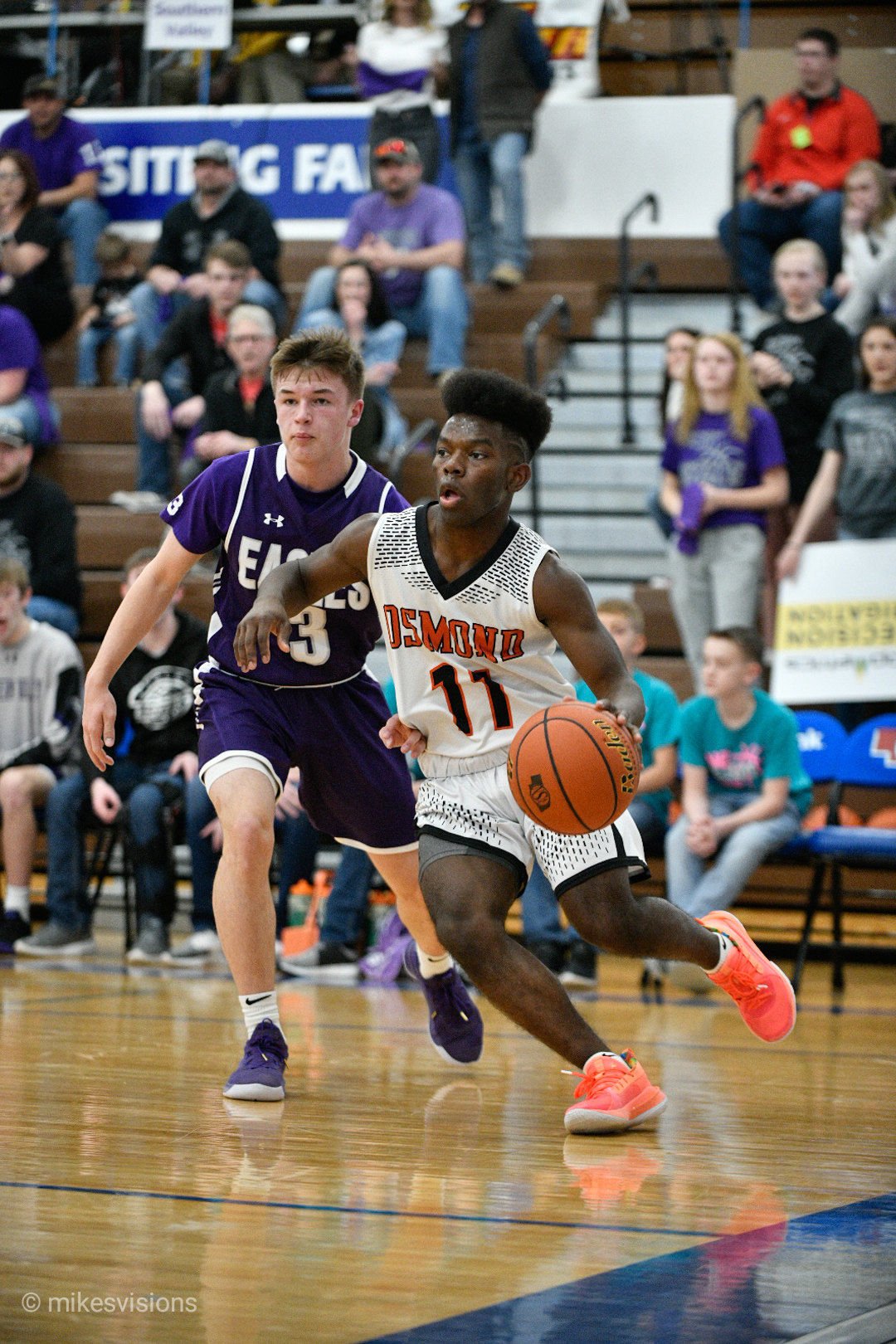 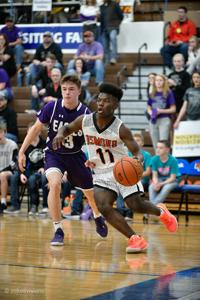 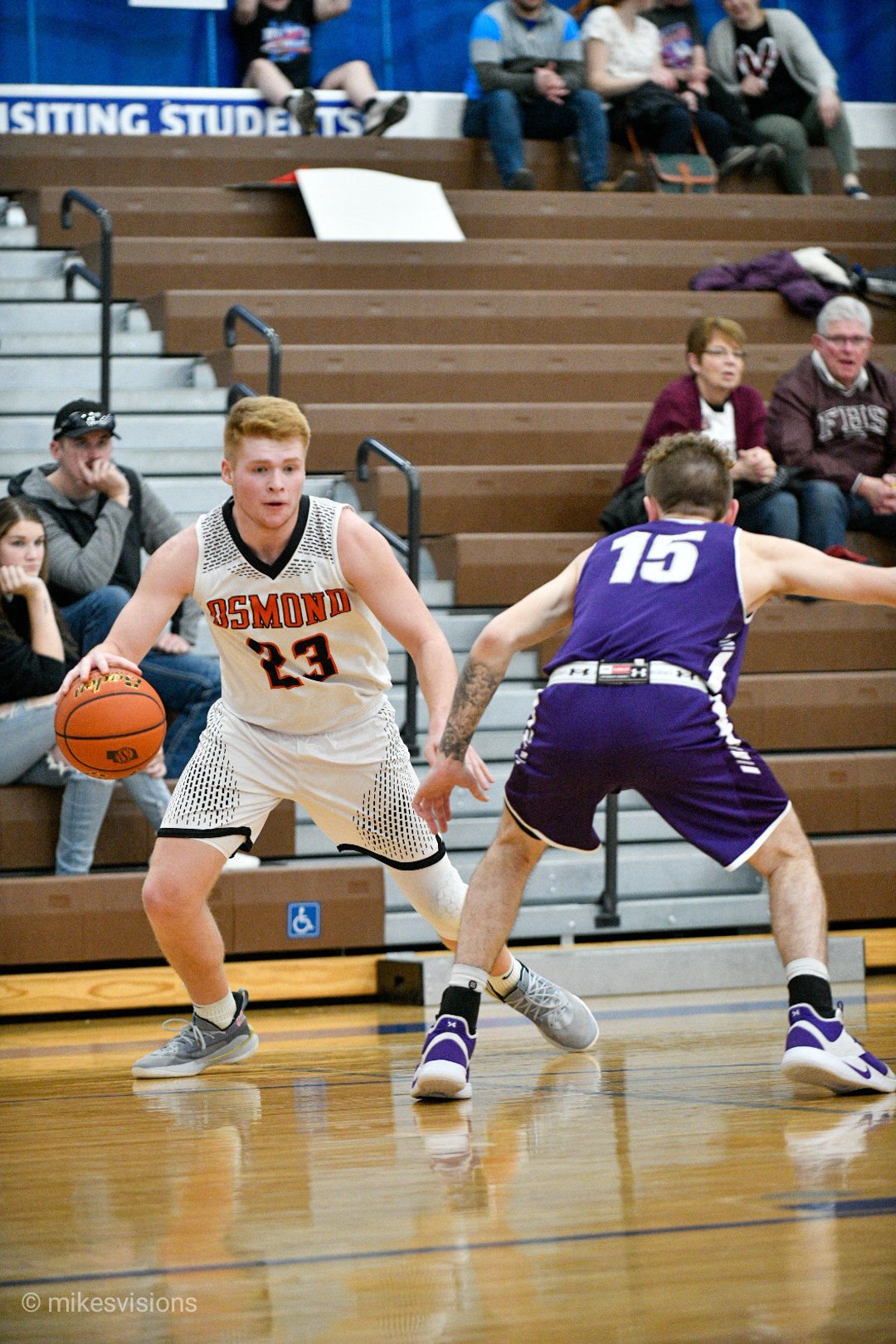 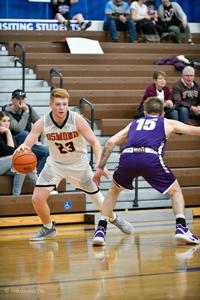 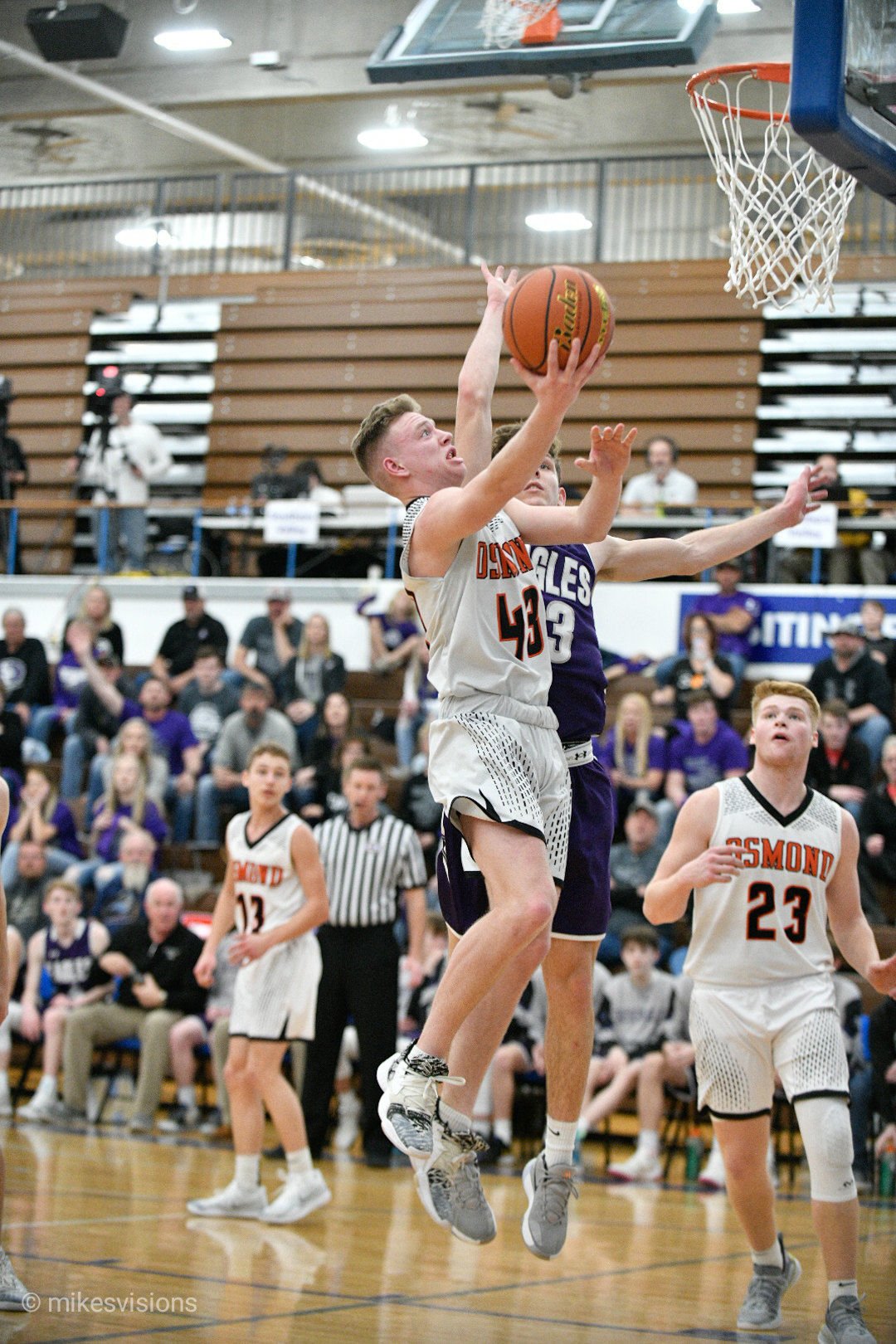 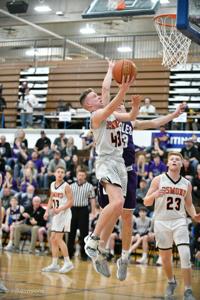 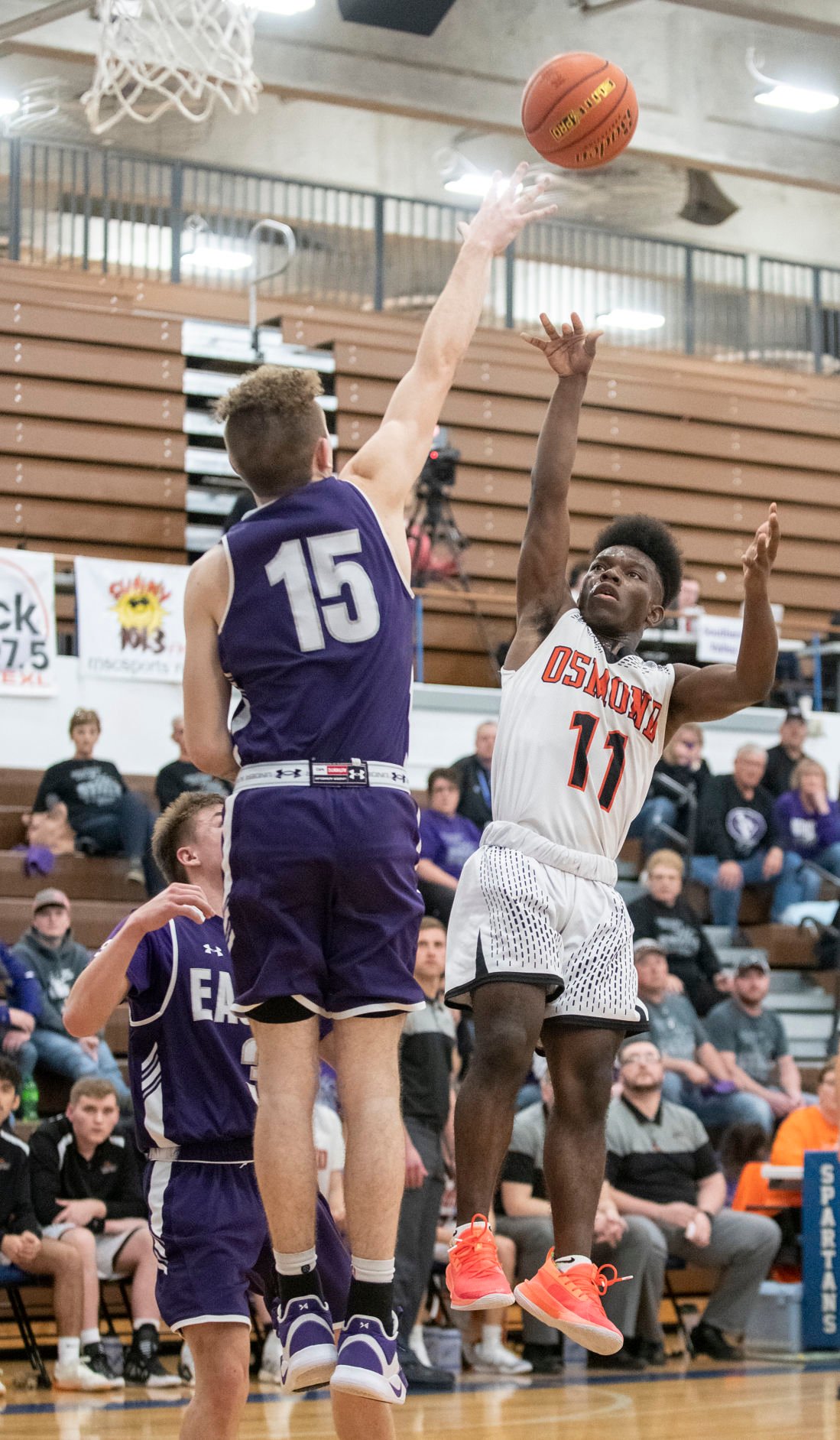 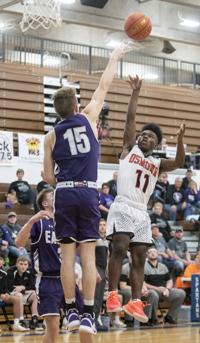 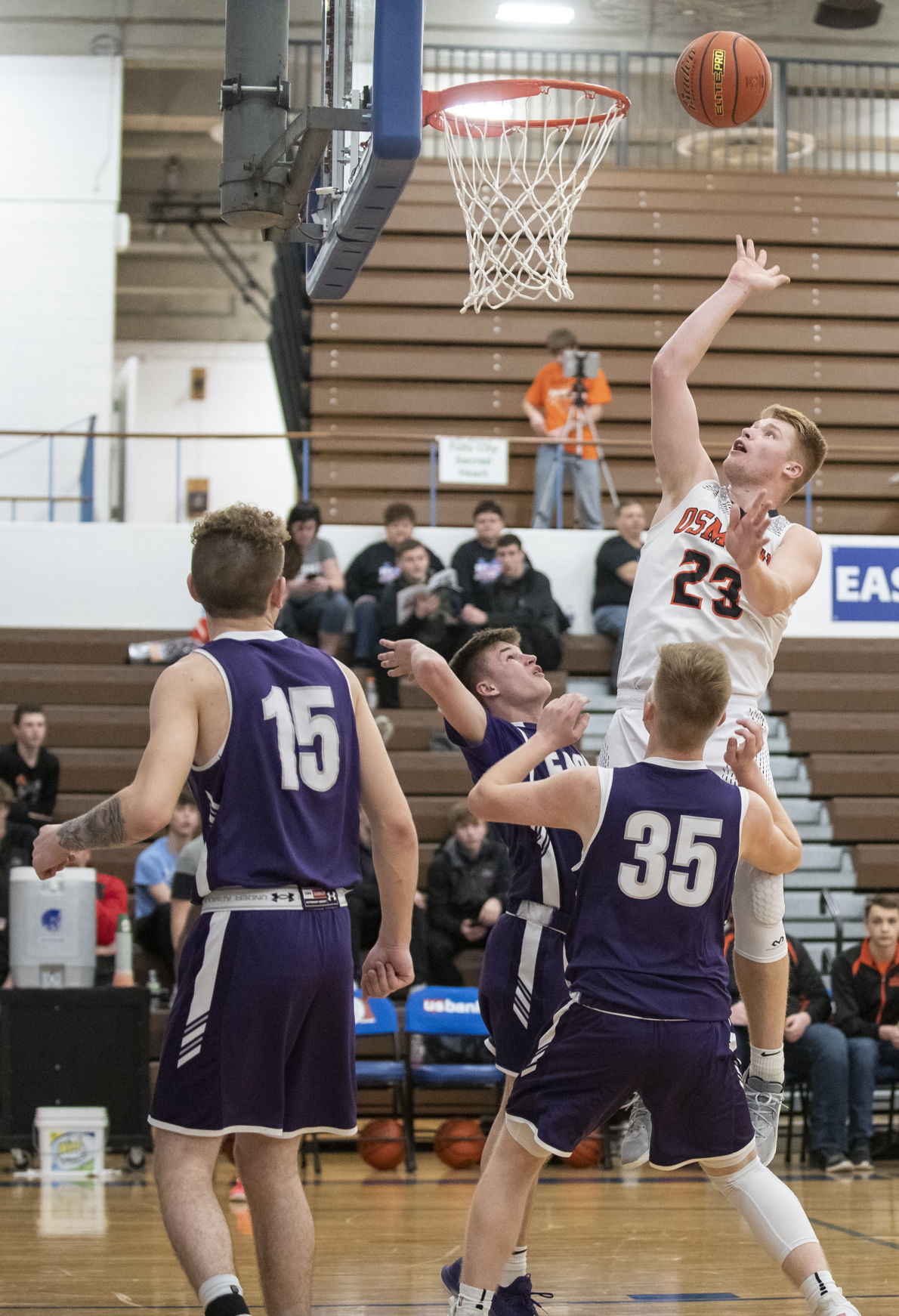 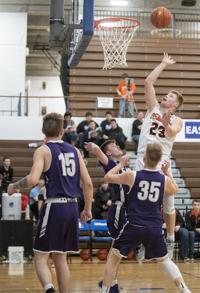 Mike Anderson/Correspondent Lincoln- Keaton Timmerman of Osmond attempts a shot as Brayden Cunningham and Beau Baily (35) attempt to block him. 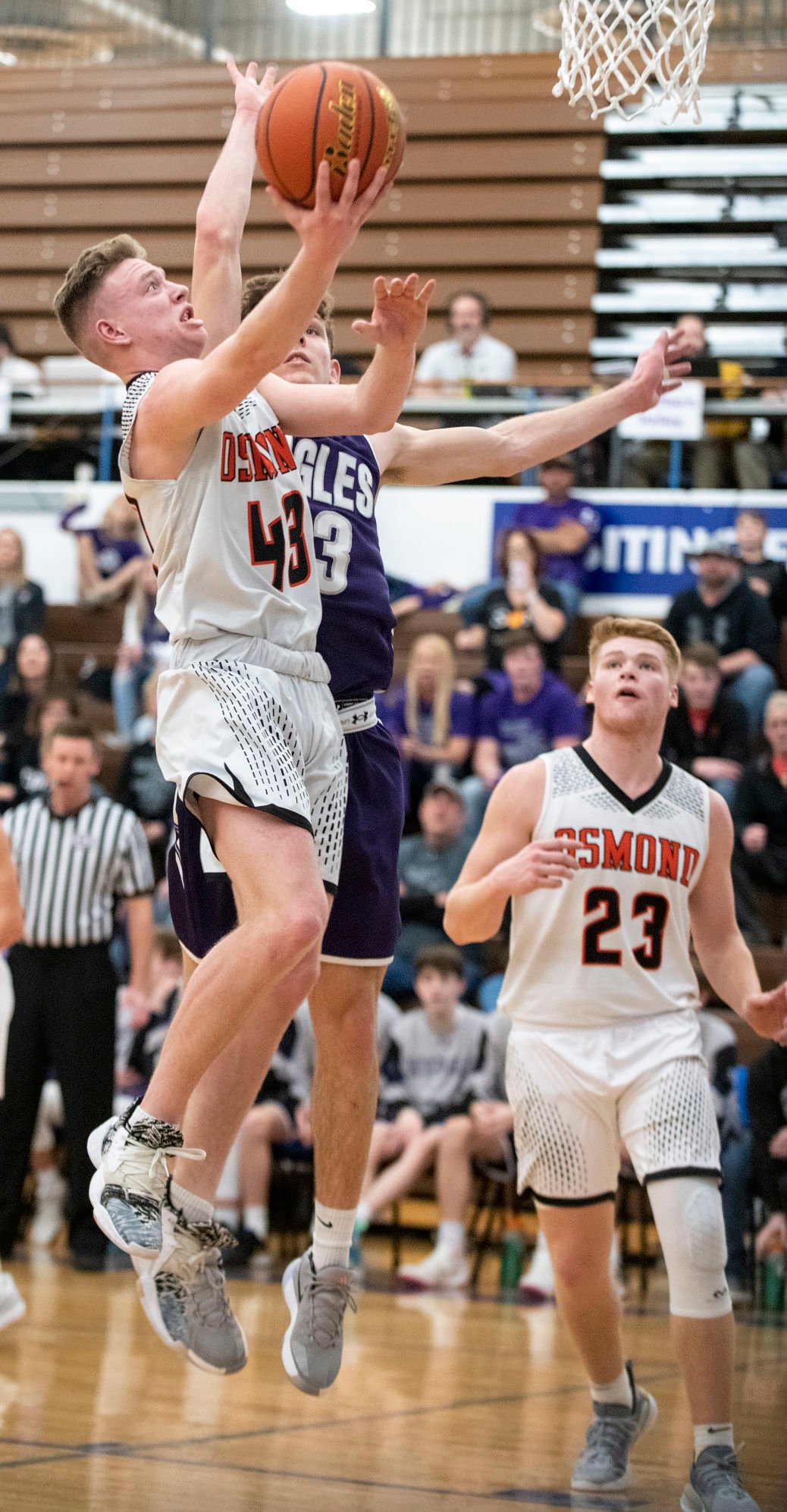 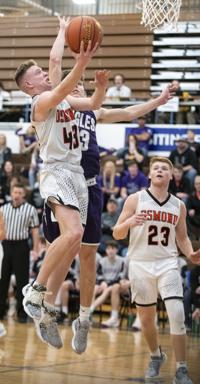 Mike Anderson/Correspondent Lincoln- Graysen Schultze of Osmond tosses up the ball while falling to the ground while being defended by Jaden Quinn (10) and Best Draden of Southern Valley during Osmond's loss Thursday.

Mike Anderson/Correspondent Lincoln- Keaton Timmerman of Osmond attempts a shot as Brayden Cunningham and Beau Baily (35) attempt to block him.

LINCOLN - Osmond came in to the Nebraska Class D 1 State Boys Basketball Championships with a lot of momentum, a one-loss record and the spirit to improve on last year’s runner-up finish in D2.

Unfortunately, the Southern Valley Eagles didn’t get the memo and turned back the Tigers with a free throw with 3.8 seconds left to send Osmond home with a 24-2 record after a 50-49 win here at Lincoln East High School.

“It is disappointing to go home this way,” Osmond coach Todd Schulze said. “But when you get down here, you need to play your best or you go home – we didn’t play our best.”

If effort scored points, the Tigers would still be playing in the tournament, but points are not tallied by effort, but by baskets and Osmond had trouble finding the baskets/points at times before finally waiting too long to survive.

“Give them credit,” Schulze said. “They made plays down the stretch to advance – we just didn’t match them when we needed to.”

The score never got over a four-point advantage the entire game and with the count deadlocked at 49 after a couple of free throws from Keaton Timmerman and a little over a minute left in the game made it 49-49, the Tigers got a steal from Graysen Schulze with 52.6 seconds left.

Todd Schulze called timeout to set up a play.

After the set play failed, with the score still tied, the Tigers fouled.

The Eagles missed both free throws and with 31.5 seconds left, Osmond was back in the driver’s seat.

Earlier in the game, the Tigers led by four at the end of the opening eight minutes, 12-8.

The Eagles came back to even the game in the second quarter and take a lead by the intermission, 21-19.

Osmond responded in the third, but again, Southern Valley answered to head to the final stanza with a 38-35 lead.

“We kept coming at them,” Todd Schulze said. “We just couldn’t string together enough points to get away from them and move on.”

“These guys have won more games than probably anyone over four years in the history of Osmond basketball,” he said. “They have had a lot of success, we just didn’t play our best tonight and that is as simple as it is. You have to down here.”

Timmerman paced the Tigers with a game-high 26 points in his final game for Osmond.

Clayton Berry paced the Eagles with 20.

Southern Valley will move on to play Humphrey/Lindsay Holy Family at the Bob Devaney Sports Center Friday at 10:45 a.m.

The Bulldogs were a 71-53 winner over Fullerton as they move on to defend their D1 state title from last year.

Mike Flood of Norfolk, the lone candidate seeking to represent the 19th District in the Nebraska Legislature, plans to spend the next four years improving Norfolk’s economy and finding ways to keep young people from Madison and Stanton counties in the area long term.

Briese reflects on challenges of the Legislature

If state Sen. Tom Briese of Albion has learned one thing from his time in the Legislature, it’s that it’s not easy to pass legislation.

Not always desirable to ditch the dated

Out with the old, in with the new.

About 100 families and households in Norfolk each received three bags of groceries Thursday through a combined effort.

Norfolk’s newest community bank didn’t expect to open during a pandemic, but business at the modern two-story facility has been strong despite COVID-19 challenges.

A former Norfolk resident’s book about life on the home front during World War II is the 2021 One Book One Nebraska selection.

"Okay...now will you tell me where you hid my bananas?"

Debora Pederson
was this week's winner.