When it comes to weather, this corner of the state has relatively low risk 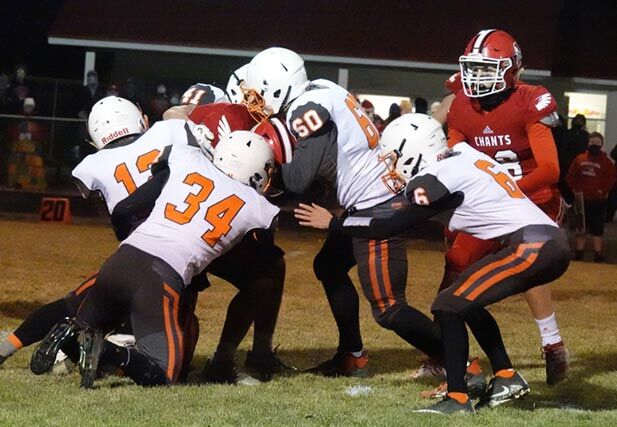 A group of Oakland-Craig players converge on Ord punter Kelen Meyer after he tried to run with the ball after a bad snap during Friday's Class C2 semifinal game in Ord. 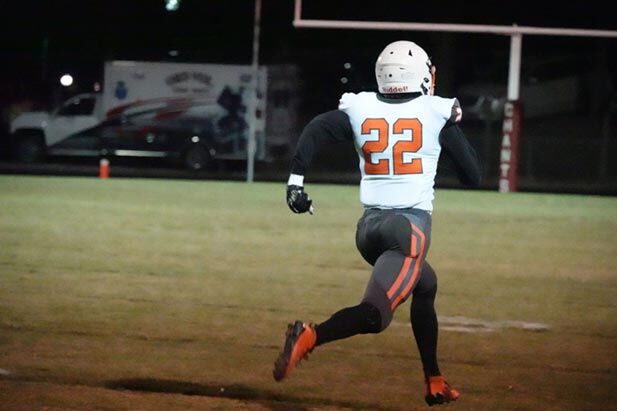 Jack Pille of Oakland-Craig breaks into the open field during the first half of Friday's Class C2 semifinal game at Ord. 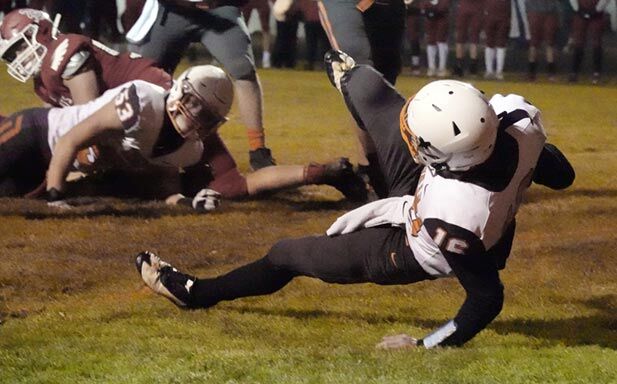 Grady Gatewood of Oakland-Craig tumbles into the end zone for the game tying touchdown during Friday's Class C2 semifinal game in Ord. 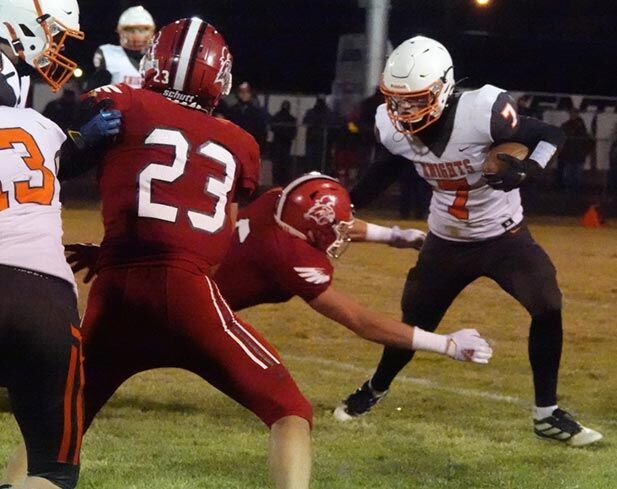 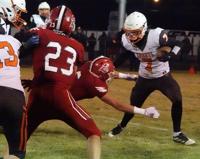 Gunnar Ray of Oakland-Craig tries to get past Quinton Ries of Ord during Friday's Class C2 semifinal game in Ord. 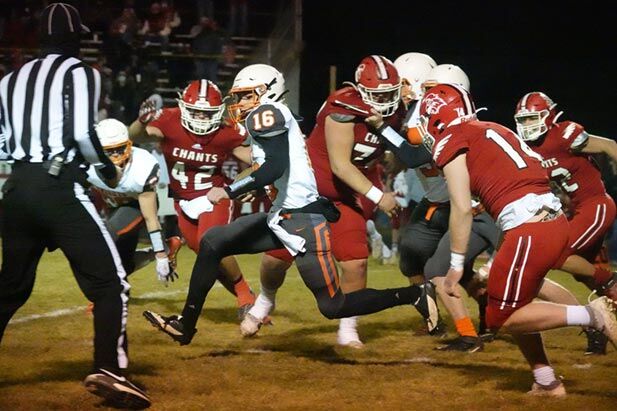 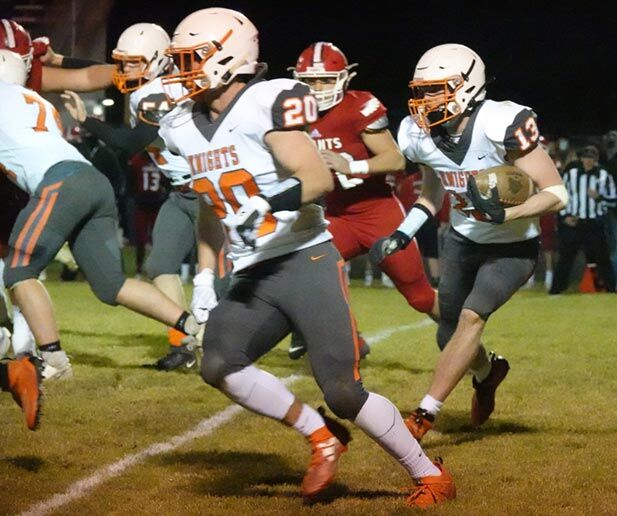 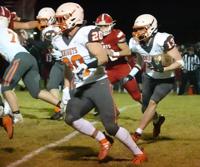 A group of Oakland-Craig players converge on Ord punter Kelen Meyer after he tried to run with the ball after a bad snap during Friday's Class C2 semifinal game in Ord.

Jack Pille of Oakland-Craig breaks into the open field during the first half of Friday's Class C2 semifinal game at Ord.

Grady Gatewood of Oakland-Craig tumbles into the end zone for the game tying touchdown during Friday's Class C2 semifinal game in Ord.

Gunnar Ray of Oakland-Craig tries to get past Quinton Ries of Ord during Friday's Class C2 semifinal game in Ord.

ORD — Just when it seemed that Oakland-Craig was finally going to take charge in its Class C2 semifinal game, Ord made a statement that the Knights couldn't answer.

Second-seeded Ord scored 10 points in 1 minute, 34 seconds of the fourth quarter, and it was enough for the host Chanticleers to end Class C2 defending champion Oakland-Craig's season 38-28 Friday night at Bussell Park.

It was an untimely ending for the Knights who had reached the semifinals for the third straight season.

“These seniors are a special group,” Oakland-Craig coach Joe Anderson said. “They've accomplished so much these last four years, what they got to experience and what this whole town got to experience because of them. It was pretty special.”

Ord's tandem of quarterback Zach Smith and running back Tommy Stevens proved to be too much for the Oakland-Craig defense much of the night. The duo combined to rush 38 times for 361 of the team's 388 yards of total offense. Stevens finished with 21 carries for 188 yards and two touchdowns, while Smith had 173 yards and three touchdowns on 17 rushes.

Probably most importantly, though, it was Smith's interception in the fourth quarter that changed the momentum for good.

The Chanticleers had just driven 65 yards but had to settle for a field goal from Husker walk-on commit Kelen Meyer to take a 31-28 lead with 7:17 left. Oakland-Craig had a nice gain on first down, but a holding penalty negated the play.

In just four plays, the game was changed for good.

Two snaps later, Smith made a tumbling snag, regained his balance and returned the interception to the 14. Two plays after that, Smith did the honors himself with an 8-yard touchdown to cap the scoring.

“I'm just really proud of the guys,” Ord coach Nathan Wells said. “They kept fighting. This is a special group. … They just willed themselves to victory.”

Both teams traded blows akin to a championship bout early on. After each team punted on its first possession, the Chanticleers and Knights combined to score touchdowns on the game's next five drives and then each team punted again to end the half.

Ord then took a two-score lead on Smith's short scoring burst on its first drive of the second half, but Oakland-Craig responded with a 13-play drive that took 6:03 to pull within a touchdown.

“It seemingly went from we had the game under control. ... Those kids (Oakland-Craig) are going to fight, scratch, claw, whatever the whole game,” Wells said. “They’ve got smart coaches and ... really good players.”

Then the Knights kicked it up a notch defensively, forcing a three-and-out. On fourth down, an errant snap led to a 12-yard loss and Oakland-Craig got the ball just 27 yards away from paydirt. Four plays into the fourth quarter, the Knights cashed in to tie the game with 9:48 left.

“We started tackling better, first of all,” Anderson said. “And then offensively, we started moving the line of scrimmage. We were taking it right at them and going back to some of our bread-and-butter plays, and that really got us back in the game.”

— Going into Friday, Oakland-Craig had made the finals two of the past five years, including last year's 13-0 state championship season. Furthermore, the Knights had made the semifinals one other time in that stretch, a 35-14 loss to eventual champion Centennial in 2018. This was Oakland-Craig's third straight semifinal berth.

— Oakland-Craig was much more balanced than Ord. Junior quarterback Grady Gatewood was 13 of 20 passing for 157 yards, while Ord had 54 passing yards on four completions. Caden Nelson led the Knights rushing with 113 yards and two touchdowns on 26 carries.

— In contrast, this was the third straight season Ord has made the state playoffs, tying for its longest streak in school history. The Chanticleers have made the finals just once, when they lost to Aurora in the Class C1 championship in 2018.

Time Out: Pierce to host state football title game for the first time since ...

Robot handy to have, fun to watch

Tom got me what I considered to be the ideal Christmas gift as it included three important things: technology, entertainment and less time cleaning.