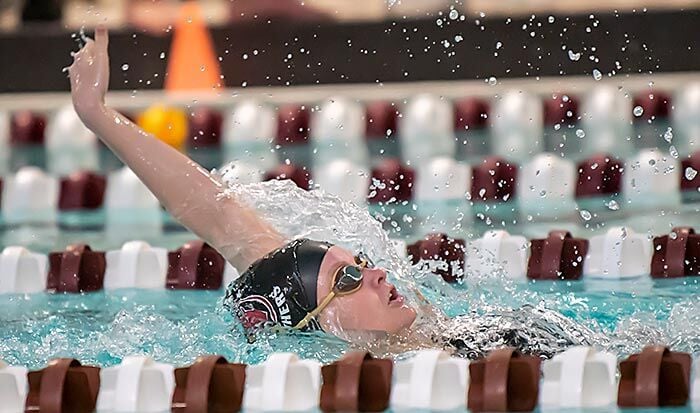 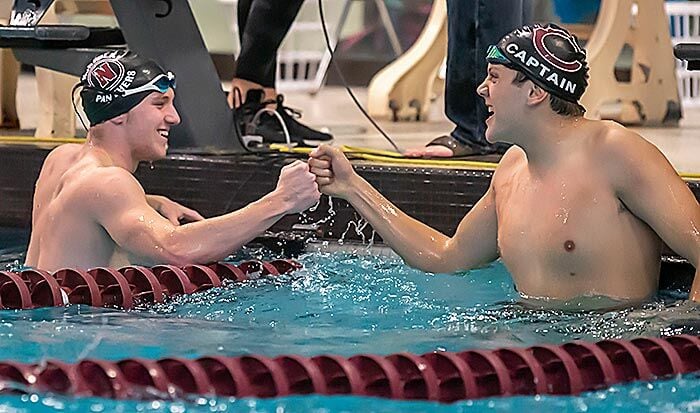 Elsie Olberding is making waves for the Norfolk High swimming and diving team.

The sophomore, who has already qualified individually for the Nebraska state swimming and diving meet in the 100 breaststroke, swam other events on Tuesday as Norfolk coach David Nelson “mixed things up” against rival Columbus.

But Olberding and her Panthers teammates still had plenty of success, downing the Discoverers 119-57 in the girls division and 109-60 on the boys side.

“We put some kids in some different events to challenge them, but we had some really good races,” Nelson said. “We’ve been working really hard at this stage of the season and had a really hard training practice on Monday, so we wanted to see how fast the kids could swim when they’re tired.”

“Overall, I’m really pleased with our progress; we’ve had a really great season as far as training,” he said. “We haven’t had any breaks and have been really blessed with some of the things we’ve been able to do this season. So we’ve been working really hard in the pool.”

Olberding swam her individual qualifying time in the 100 breaststroke during a dual meet against Lincoln East on Saturday.

“She swam in the consolation heats at state last year and was a really important relay swimmer for us,” Nelson said. “But this year, with how talented the girls team is, she’s stepped up her game. She won two events today — the 200 individual medley and 100 freestyle — and has been moving herself quietly up the state rankings.”

“She’s probably in the top 12 in the 100 breaststroke, and she’s really a well-rounded swimmer who has added some depth to our girls team,” he said. “She’s just a sophomore, and it seems like she keeps getting faster and faster every time she swims.”

As a freshman last year, Olberding was a member of Norfolk’s relay teams at state, all of which qualified for the finals. That included the school record 200 medley and 400 freestyle relays, but she’s looking forward to competing once again in her specialty.

“I’m pretty excited about qualifying in the 100 breaststroke; it was one of my goals to make state before the conference meet this year,” Olberding said. “I really want to place at state in the finals. I put a lot of hours in the pool during the offseason to prepare for this season.”

Against the Discoverers, Olberding had fun competing in the events Nelson assigned.

“Today was a good day,” she said. “I dropped four seconds in my 200 individual medley.”

Olberding — who began her swimming career in the Norfolk Aquajets youth program —said the season is “going pretty good for everyone,” noting that even though the team lost valuable seniors to graduation last year, girls have been able to replace those times.

Now that Olberding has qualified, the girls team has five individuals who have qualified for state, including Annika Harthoorn, Joslyn Jacobs, foreign exchange student Marzia Gasparini and diver Kiran Walker.

Nelson noted that he was especially pleased with the performance of his boys squad against Columbus.

“It was pretty impressive that our boys, with only 11 swimmers on the roster, were able to win,” he said. “The boys did really well.”

Against Columbus, Olmer won both the 50- and 100 freestyle races, while also helping the 200 medley and 200 freestyle relays to first-place finishes.

“Several of the boys are accumulating ‘secondary times,’ which means that if you’re in the top 32, you can still be invited to swim at the state meet,” Nelson said. “We have some boys who have that potential.”

The Norfolk season has been primarily dual competitions, but Nelson said he’s been able to compare times posted by schools across the state.

“We know where we’re sitting in the state right now; we’ve had some pretty good swims,” he said. “I’m pleased with where we’re at.”

LINCOLN — The No. 2 Weeping Water Indians came out on top in an overtime thriller against the No. 3 Hartington Cedar Catholic Trojans 51-50  in the semifinal of the Class D1 Nebraska girls state basketball tournament Thursday.

LINCOLN — A couple of familiar foes got together late Thursday morning for what seems to be their annual date in Lincoln at the Class D2 girls state basketball tournament here.

LINCOLN — Humphrey St. Francis drew one step from an undefeated, state championship season on Thursday after defeating Mullen 65-59 in the semifinals of the Class D2 state tournament at Pinnacle Bank Arena.

LINCOLN — Cedar Catholic’s Brynn Wortmann was on fire early, and it was enough to secure them their 46-37 victory over South Platte in the opening round of the girls state basketball tournament.

LINCOLN — Sixth-seeded Ponca used a 17-2 run in the second quarter to pull away and then stretched the lead in the second half for a 59-45 victory over Guardian Angels Central Catholic in the opening round of the Class C2 state tournament at Lincoln Southeast.

LINCOLN — Class C2 of the girls state basketball tournament had its first upset of the bracket when the No. 7 seed Bancroft-Rosalie/Lyons-Decatur Wolverines upended the No. 2 seed Wood River Eagles 62-41 in the quarterfinals at Lincoln Southeast on Wednesday.

LINCOLN — North Bend Central certainly looked the part of a defending state champion on Wednesday afternoon in the Class C1 quarterfinals at Pinnacle Bank Arena when it overwhelmed Broken Bow 50-29.