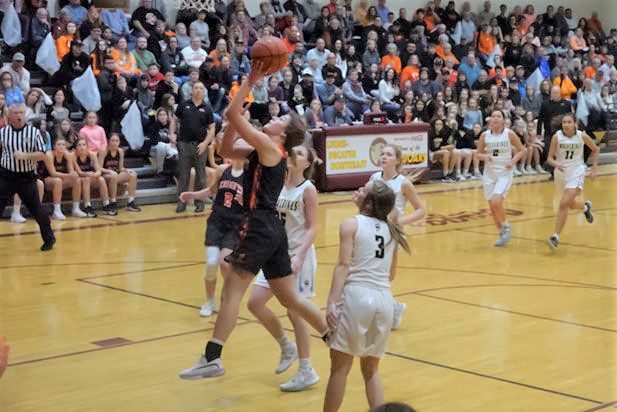 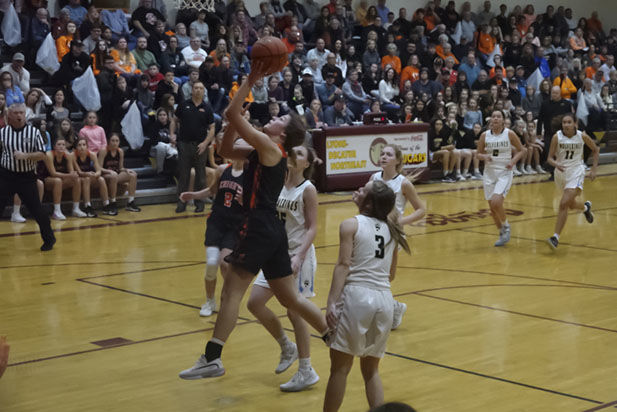 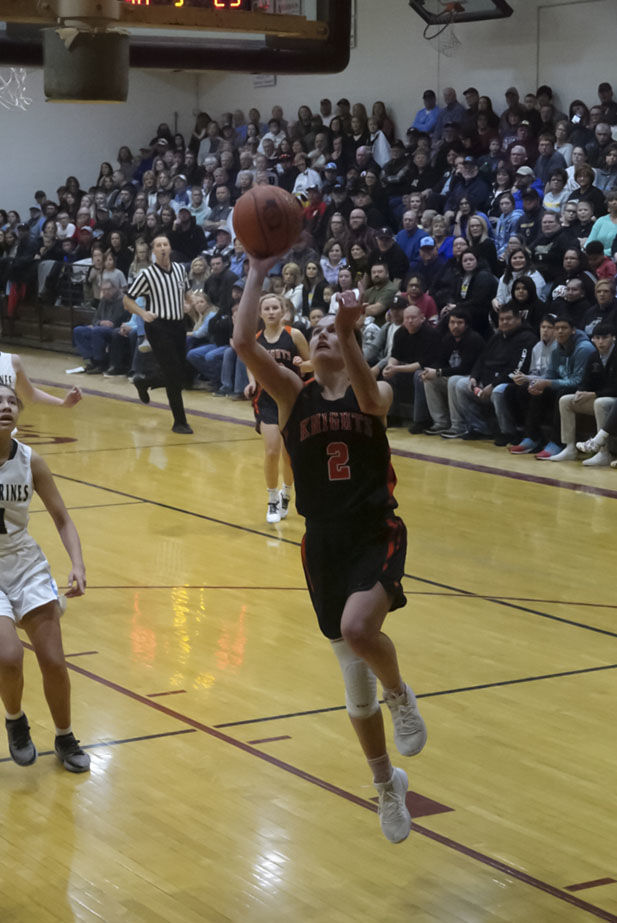 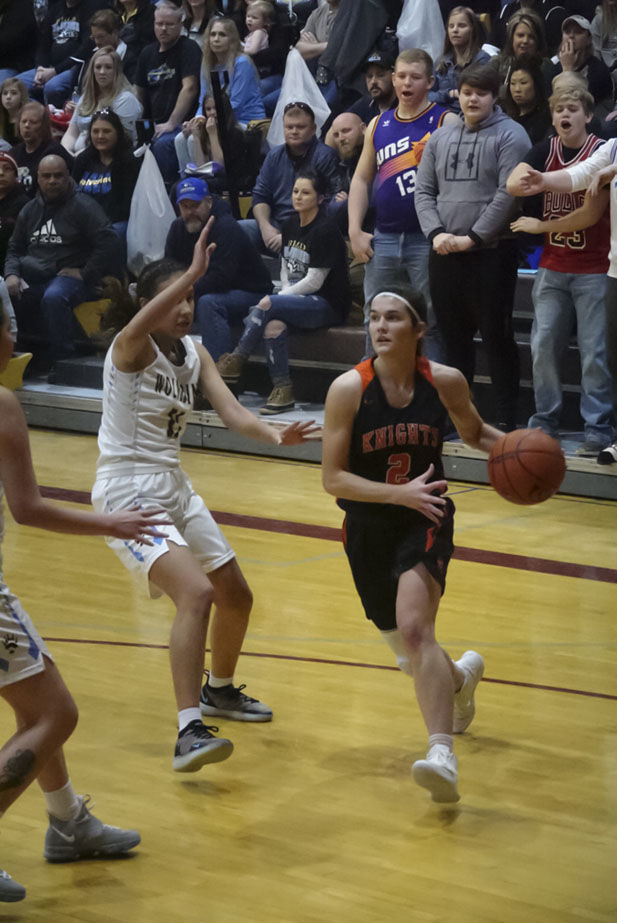 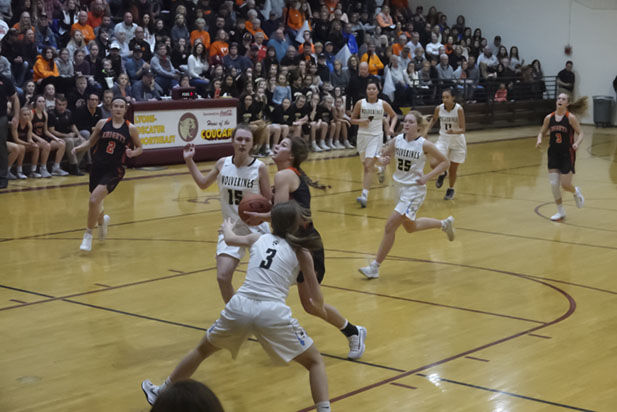 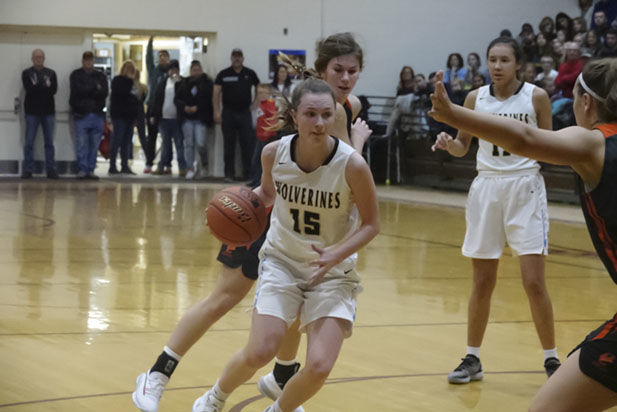 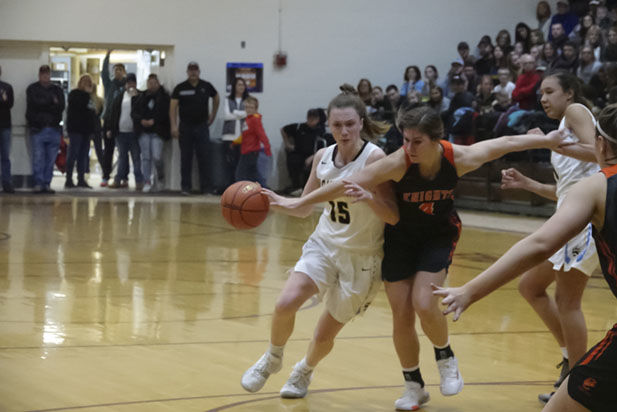 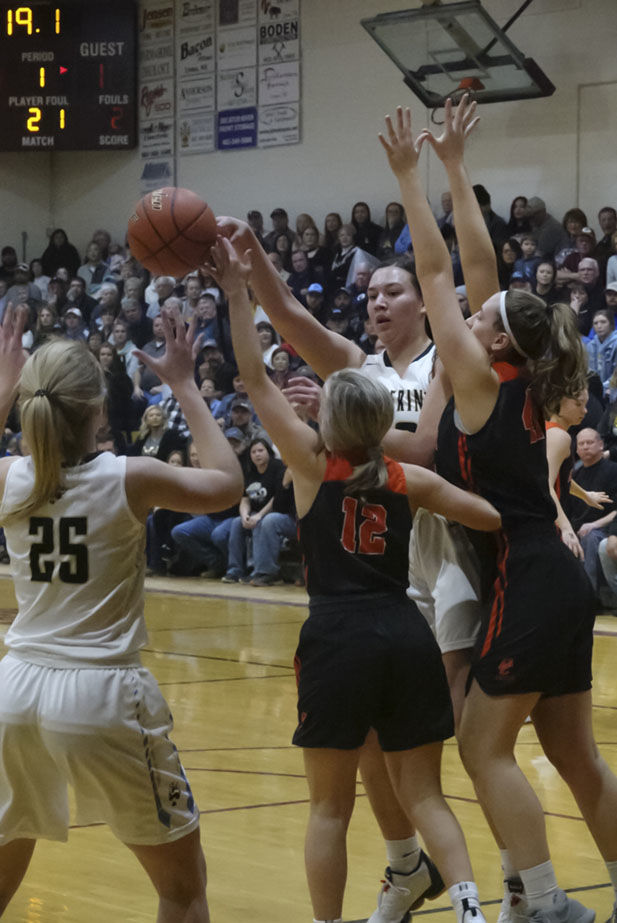 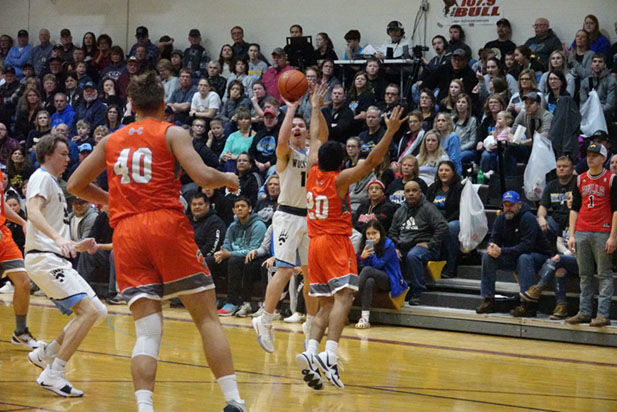 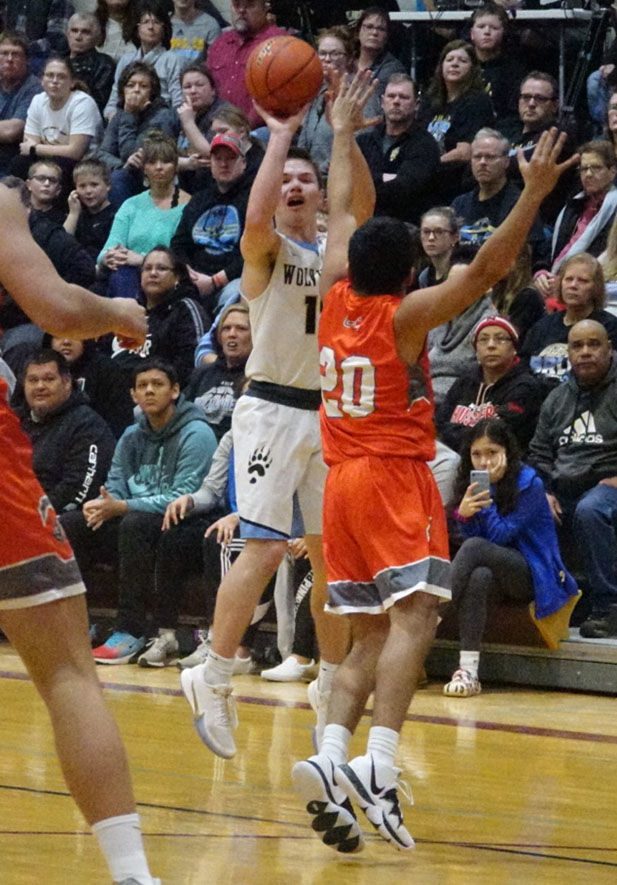 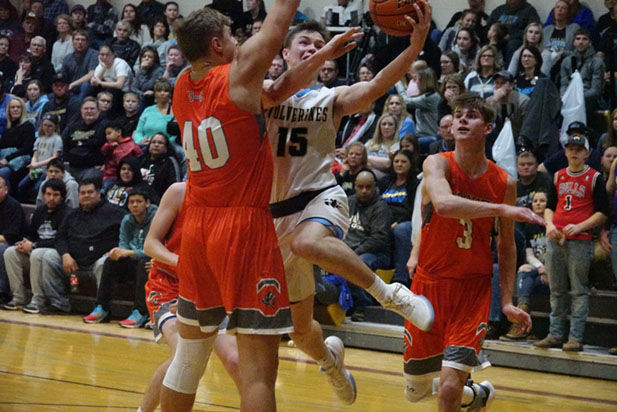 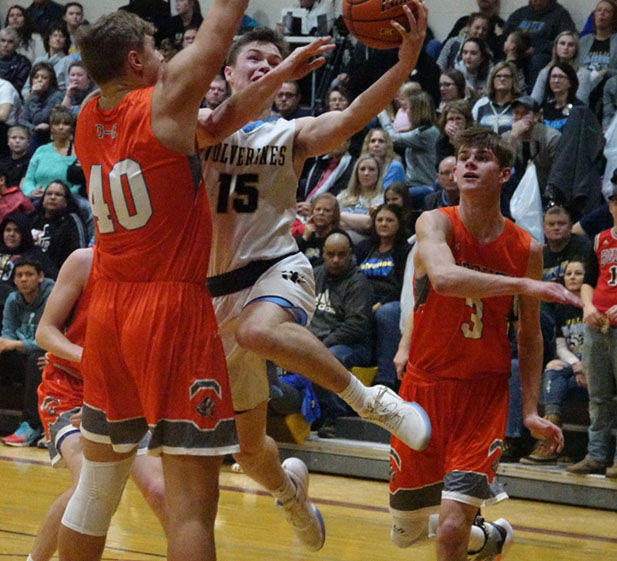 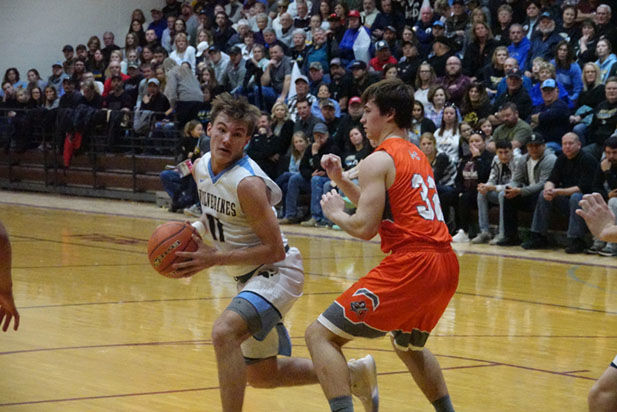 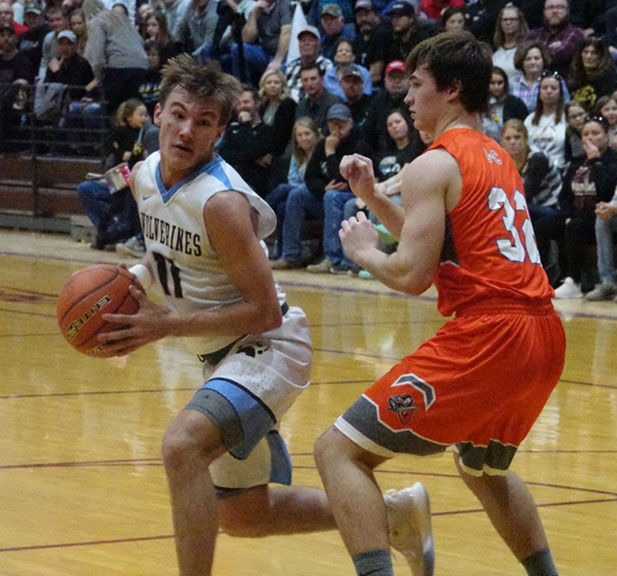 LYONS — It was only fitting that Saturday’s girls basketball game between second-ranked Oakland-Craig and third-ranked Bancroft-Rosalie/Lyons-Decatur came down to the last second.

It was a rather surprising heroine, however.

Chaney Nelson capped a matchup of undefeated teams when the freshman tossed in a corner 3-pointer at the buzzer to finish a game-ending 10-0 run for the visiting Knights, including seven points in the final 1 minute, 12 seconds, to stun the Wolverines 55-52 after the hosts led by 12 going into the fourth quarter.

“Our kids never give up,” Oakland-Craig coach Joe Anderson said. “Our girls have been in this position before, and every time I called, they kept believing and said, 'We got this.'

“They were confident until the end, and they found a way.”

In the boys game, top-ranked and undefeated BRLD scored the game's first eight points and never looked back in ending Oakland-Craig's 10-game win streak 66-37, a result that may have been a byproduct of having an extra day off between games.

“The kids, they wanted to play in the worst way,” BRLD coach Cory Meyer said, “and I couldn't be more proud of them.”

Had it not been for Nelson's last-second shot in the girls game, the story of the day would have been, and still probably was, senior teammate Kennedy Benne.

The 5-foot-7 guard finished with a game-high 32 points after she single-handedly kept the Knights in the game all day. A Briar Cliff University commit, Benne had all 10 of her team's points in the first quarter, six more in the second quarter for 16 of the team's 21 first-half points, and she bounced back from a four-point third quarter to hit 7 of 8 free throws on her way to 12 points in the fourth.

“I feel she's the best player in Class C,” Anderson said. “She's tough to guard, and to have her out on the floor, her leadership … she's just an outstanding competitor in our program and been a great role model for our younger girls to follow.”

Benne also achieved a career milestone by scoring her 1,000th career point on a free throw with 6 minutes, 17 seconds remaining — a remarkable feat considering Benne missed roughly a full calendar year following a knee injury to halt what was a sensational start to her sophomore season. Play stopped momentarily, and she received a standing ovation from both sides.

“It was crazy. I was not expecting it,” Benne said. “I had no idea I was that close, either. When they announced it, I was really shocked because I had to sit out a year and come back.”

Oakland-Craig turned what was a 12-point deficit to begin the fourth quarter into a three-point gap midway through the fourth, but it never led in the second half until Nelson's last-second shot.

Makenna Pearson tied the game with 44 seconds left on a short jumper inside, and BRLD successfully stalled before taking a timeout with 26 seconds on the clock. Shortly after inbounding the ball, Mya Guzinski stole it for Oakland-Craig, and the Knights took a timeout with 10 seconds left. Guzinski dribbled and swung the ball down to Nelson in the corner, who returned it. After looking toward two other teammates, Guzinski passed again to Nelson in the corner, who caught it and shot as KaiLynn Lovejoy of BRLD closed in.

“We ran a play that we worked on all week; we just switched our personnel around a little bit,” Anderson said. “We thought we could get the ball into Kennedy and try to get her into scoring position around the high-post area. They really collapsed around her, which left us open on the perimeter.”

Nelson admitted the play wasn't designed to go her way.

Oakland-Craig needed to rally after it seemed BRLD had all the momentum in the third quarter. Aubrey Berg dropped a corner 3 for the first 10-point lead of the game, 37-27, with 2:30 on the clock, and she gave BRLD the largest lead of the game for either team when she splashed another corner 3 at the buzzer for a 42-30 gap.

“I thought in that third quarter, we really pushed the ball up and looked into the post, where I thought we had an advantage,” BRLD coach Rod Peters said.

But as the Knights have shown in recent seasons, they don't give up easily.

“My mindset was that, last year ... there was one game when we were down almost 20 in the fourth quarter and we came back (and won), and our freshmen were managers last year, so they were in that atmosphere, and they knew we could do it,” Benne said.

Benne started the comeback with a 3 in front of the BRLD student section. She followed with 4 of 4 free throws to hit the milestone, then added 1 of 2 with 5:42 left to put the Knights within 44-38. Benne got a steal and layup, and then Jeannina Blahak's putback made it a 47-44 game.

For a moment, it appeared BRLD would have just enough to hold off a comeback after Alyssa Buchholz's 3-pointer for a 52-45 advantage. As it turned out, those would be the last points of the day for the Wolverines.

“We struggled at the end. There's no doubt about that,” Peters said. “We were 3 of 11 from the free-throw line, so free throws can cost you a game. But give a lot of credit to Oakland-Craig. It's a very good basketball team.”

IN THE BOYS game, four different Wolverines combined for four baskets to begin the game, and the hosts never looked back after the visiting Knights climbed to within 10-8 early.

After that point, BRLD scored 41 of the game's next 51 points, a stretch that spanned more than 1½ quarters.

A pair of juniors led the way, as Dylan Beutler finished with 21 points and Lucas Vogt tacked on 20.

“Obviously we came out ready to play, but we were expecting them to be hitting on all cylinders,” Vogt said. “We hit way higher than what we had this year. This is our best performance, for sure.”

BRLD scored 10 of the final 12 points to end the first quarter on its way to a run of 17-2 that eventually turned into a 25-6 stretch capped by a Beutler 3-pointer for a 33-14 lead. The Wolverines outscored the Knights 19-6 in the second quarter for a 39-16 halftime lead, and the hosts also scored 12 of the first 14 points in the third quarter.

“Going into the game, the No. 1 focus was that the best defensive team was going to win. I felt like we did that,” BRLD coach Meyer said. “We just did everything we needed to.”

Beutler scored off a fast break, then Vogt fed Jaxon Johnson in the paint on the next possession for a 47-18 lead. Will Gatzemeyer passed to Beutler on what nearly was an alley-oop play before a putback with 3:54 remaining put the Wolverines ahead 51-18 in the third quarter.

“It's tough to simulate their athleticism in practice,” Oakland-Craig coach Aaron Meyer said. “We wanted to come out and work hard. I think we found out a few different areas we were weak at, and things just snowballed from there.”

An extra day of rest was just what Bancroft-Rosalie-Lyons-Decatur needed to end a winning streak for Oakland-Craig, but a true test awaits the…

Dessert. Coffee. Pop. Fast Food. Social media. Screen time. These are common items that are given up for Lent. Supplements in faith life, such as additional prayer or almsgiving, are also typical. Lent is a six-week period before Easter characterized by additional sacrifice. Personally, I pa…

Lent is a solemn religious observance in the Christian liturgical calendar that begins on Ash Wednesday and ends approximately six weeks later on Holy Saturday, the day before Easter Sunday. This is a season of reflection and preparation before the celebrations of Easter. By observing the 40…

Has never gave anything up during Lent season before

Lent is an important period of time for many people. It is the time of the year when Christians prepare for Easter and for most people that includes giving something up.

Notes and quotes from the state wrestling tournament

The Norfolk FFA Alumni and Supporters Chapter is marking its 40th anniversary in 2020.

A day in the life of the ag room

On a random day in February, a pink glow from the hydroponics room lights up the shop windows before the day starts. The day will be full of career pathways focusing on plants, animals and natural resources with a few life lessons thrown in along the way.

OMAHA — Simply put, Plainview did what it was expected to do at CHI Health Center.

Wayne junior Leatherdale pins down title in Class B