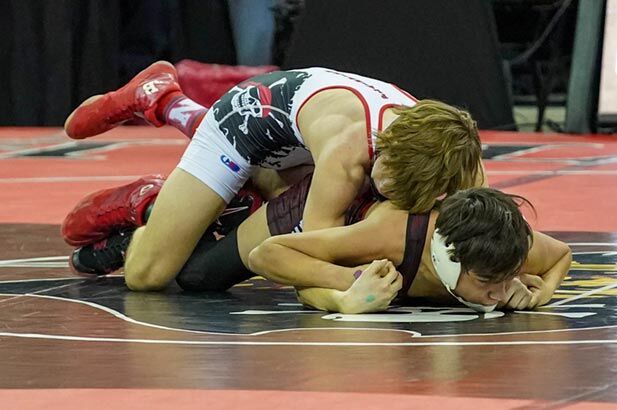 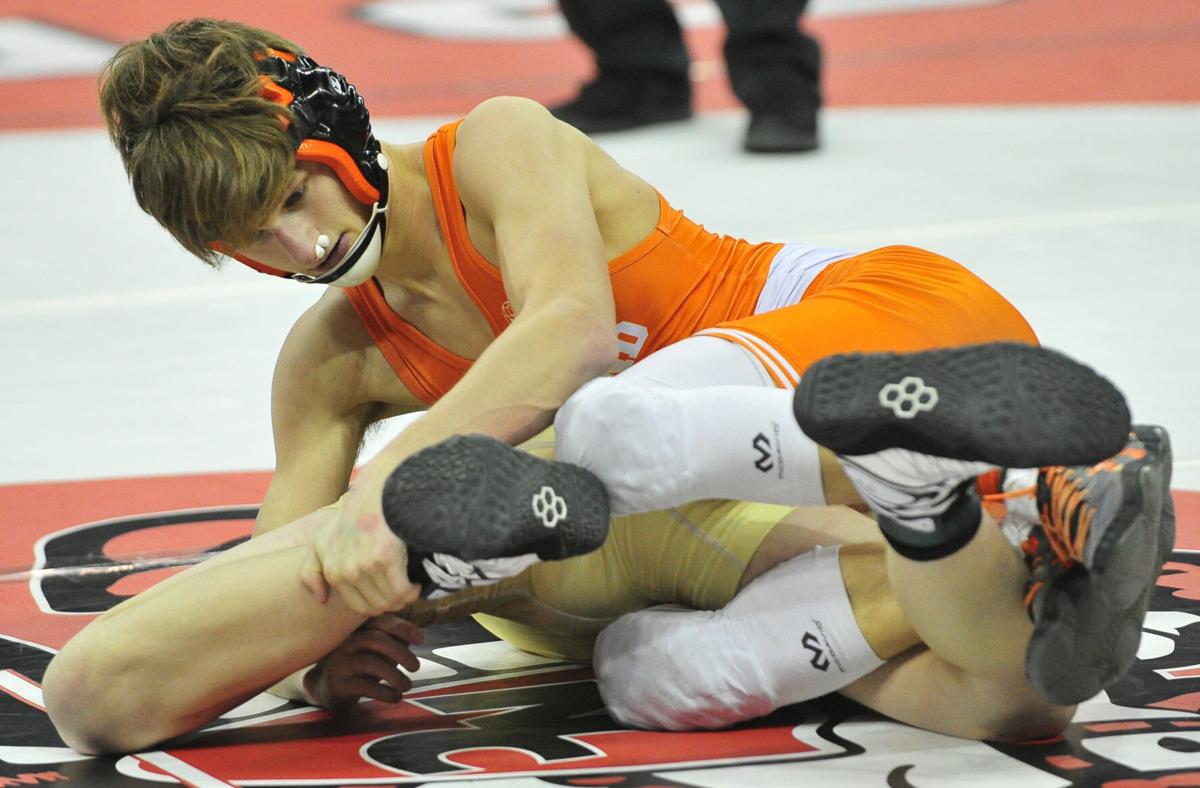 Bob and Judy Arlt of Plainview had plenty to cheer about over the weekend as two of their grandsons, Eli Lanham of Plainview and Trenton Arlt of Oakland-Craig, both wrestled for state championships.

On Thursday, Eli put the icing on a 43-0 season by defeating Hayden Neeman of Superior 4-1 for the Class D state championship at 106 pounds. Then on Saturday, Trenton finished second place in the Class C 106-pound bracket with a 4-2 loss to undefeated Drew Garfield of Central City.

Both boys are seniors and four-year state qualifiers. Coincidentally, both wrestled their first state tournament match against each other as freshmen in 2018. Eli won 4-2.

Eli earned four state medals — two firsts, a second and a fourth — while Trenton stepped on the medals stand for the first time this year.

According to Eli's father, Dr. Darron Arlt, Trenton finished his career as the all-time wins leader at Oakland-Craig with 161, while Eli's 165 career victories is second at Plainview, behind only four-time state champion Christian Miller.

It seemed strange to look up at the huge CHI Health Center scoreboard and not see Valentine among the team leaders in Class C.

Most people who follow the sport closely thought Valentine would be in the mix again this year. But the injury bug hit the Badgers. Hard.

"We've had eight starters go down with season-ending injuries," Valentine coach Shane Allison said. "We've got two state medalists that got one tournament between them this year.

"Just injury after injury. Just crazy stuff. Knees, shoulders, we had one kid, he's a sophomore in high school, he had to get his gall bladder taken out. It's just one thing after another. We're going to come back strong next year."

This year's Valentine squad finished in a respectable tie for 16th place with 41 points.

But it wasn't all doom and gloom for Badger fans. Senior Chris Williams became a three-time state champion after his 11-2 major decision over Konner Schluckebier of Milford for the Class C, 126-pound title.

"Chris is the only one we're losing," Allison said. "He's going to be greatly missed."

More than 30 years of service

Bill Hughes of Battle Creek isn't sure of the exact year he started working at the state tournament as a volunteer scorer and timer, but he figures it's been more than 30 years.

Hughes said it started at a district tournament in Battle Creek. "A couple of the officials thought I did a decent job and they told me to write a letter to Jim Riley (of the NSAA) who was the director of the state tournament at the time and I did. And I got a letter back, inviting me down to work the tournament and I've been working it ever since.”

Hughes has watched the tournament grow over the years and transition from the Bob Devaney Sports Center in Lincoln to the CHI Health Center in Omaha. He also competed for Battle Creek in the early 1970s when when the tourney was held at the old University of Nebraska Coliseum.

"It's a good time of the year to take a little vacation from work and, if you like wrestling, it's an awfully good seat to have," he said.

Almost every wrestling team has a “special” singlet/uniform it saves for special occasions.

That special occasion most often is for the last day or finals of a tournament, big dual, just whenever a big day or match comes along.

“A lot of teams have finals singlets,” Valentine coach Shane Allison said. “It’s an honor to wear our whites that must be earned.”

Elkhorn Valley coach Joey Tegeler agreed. “I guess wearing a different singlet for the medal rounds is something fun for the kid,” Tegeler said. “They have to ‘earn’ it in a way.”

Pierce did just that for Saturday’s final session in Omaha.

The Bluejays donned a blue-plaid front on white for their Saturday singlets. About a 3-inch ribbon across the lower back of the uniform contained the phrase 329JAYS.

The phrase refers to the “402” area codes, etc. apparent on uniforms, football helmets and any other team apparel.

The “329” refers to the phone prefix in Pierce.

The Bluejay coaching staff took it all a step further as they wore blue plaid flannel-looking shirts as they coached on the sidelines that were quite noticeable.

Arguably one of the most notable “special” singlets was the old Winside Wildcat pinstripes, recently worn for “special” occasions, but early on by necessity.

“Those old nylon pinstripes were worn for years — start of the meet until the end,” longtime former Wildcat coach Paul Sok said. “Everyone else started getting different designs for these big occasions.”

Sok avoided the temptation to change — with a little help.

“We kept our pinstripes because the parents threatened me with my life if I ever changed them,” Sok said.

He did relent and let Leon Koch, his boss, talk him into some new designs for the team to wear. “Leon made it very clear, the new uniforms could be approved,” Sok said. “But he stipulated the ‘stripes’ will come out for the finals/placing rounds.”

Which in itself became a bit of a problem.

“We had to keep the old uniforms because there was only one company that made that specific uniform,” Sok said. “None of the new companies would make them.”

It is recognizable when a Wildcat takes the mat in those “stripes.”

On Friday, we told you that Norfolk's fourth-place finish in this year's Class A state tournament may have been the best by a Panther team in history. But we received a friendly phone call from former Norfolk coach Dave Boyd to let us know that his 1978 Panthers finished third at state behind Omaha Tech and Columbus.

Boyd said he thought Tech — the alma mater of Bob Gibson and Johnny Rodgers — finished with 89 points, Columbus was second with 87 and Norfolk third with 83.

Today a typical state-winning team in Class A would have to score around 120 points to win the championship so why the smaller numbers?

Because there were only 12 weight classes in 1978 and one less round of wrestlebacks.

In those days, an athlete who lost in the first round of the state tournament was eliminated if his opponent lost in the quarterfinals.

So a wrestler who had a bad match but who could potentially score on the consolation side of the bracket was left at the mercy of the guy who beat him.

Today, every wrestler at the state tournament is guaranteed a minimum of two matches.

Boyd said Omaha Tech — which closed its doors in 1983 — didn't have a lot of qualifiers that year but that everyone who did qualify placed high. Norfolk, on the other hand, had a lot of depth as evidenced by its five medal winners in 12 weight classes.

We also told you that Norfolk's three state finalists in 2021 might be a record. Boyd, who coached the Panthers from 1975 to 1996, confirmed that none of his 21 teams ever had more than two.

New mats that belong to schools in Northeast Nebraska were front and center at this year's state tournament. On Thursday, we told you Dollamur Sports Surfaces provides the mats for the tournament and gives the schools that purchase them a discount if they allow the mats to be used at the state tourney before they're delivered to the schools.

During the Class A and Class D portion of the tournament, the NSAA used the mats of Norfolk High, Plainview and Clarkson/Leigh while mats with the Norfolk Catholic and Tri-County Northeast colors and logos — along with those of Norfolk and Plainview — were used for the Class B and Class C tourneys.

A year ago at this time, O'Neill 106-pounder John Alden lived away from his family as he attended school and honed his wrestling skills at the Legends of Gold full-time training center in Beresford, South Dakota.

The move appears to have paid dividends. Alden, a freshman, advanced to the semifinals before losing by pin to unbeaten and eventual state champion Drew Garfield of Central City.

He then rebounded with two more wins to finish his season with a third-place medal and record of 40-4.

Restrictions are lessening, problems are increasing

On a roller coaster, people are taken in circles, turned upside down, and plummeted toward the ground; however, the ride eventually ends and everything goes back to normal.

It has been a full year since COVID-19 has entered the United States. Since then, everyone’s lives have changed forever. COVID death numbers have risen, fallen, and then risen again. Now, numbers are falling again, and it seems that we may have been able to flatten the curve.

Nebraskans have done a good job being precautious

According to the New York Times, Nebraska has seen a 14% decrease in new COVID cases over the past two weeks in comparison to the weeks prior. Nebraska is among the best states at keeping cases to a minimum.

The construction industry in Northeast Nebraska showed little evidence that the COVID-19 pandemic led to tighter household budgets in 2020.

RANDOLPH — Ben Benton inherited a nearly 20-year-old project in the works when he became the city administrator here in late 2019.

HUMPHREY — Despite the frenetic pace established by Humphrey St. Francis that tested Elgin Public/Pope John’s stamina, the Wolfpack persevered during the first half. But the combination of the Flyers’ defensive pressure and transition offense ultimately took its toll in the second half.