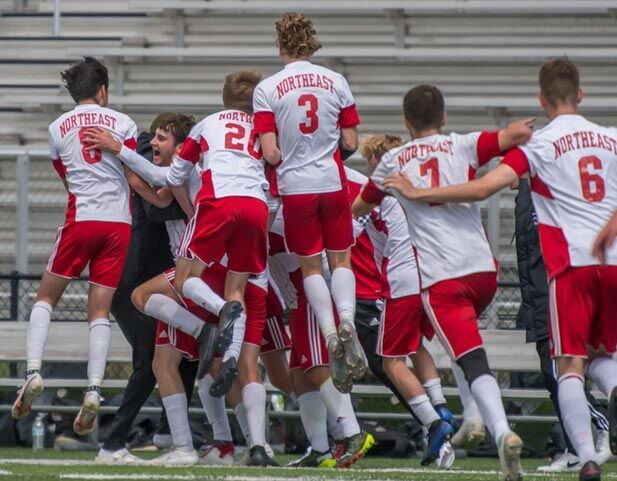 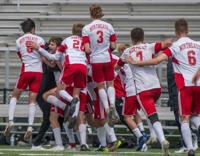 Northeast Community College's Samuel Holland (second from left) is mobbed by teammates after hitting the go ahead goal with seconds on the clock against North Iowa Area Community College Wednesday at Memorial Field. 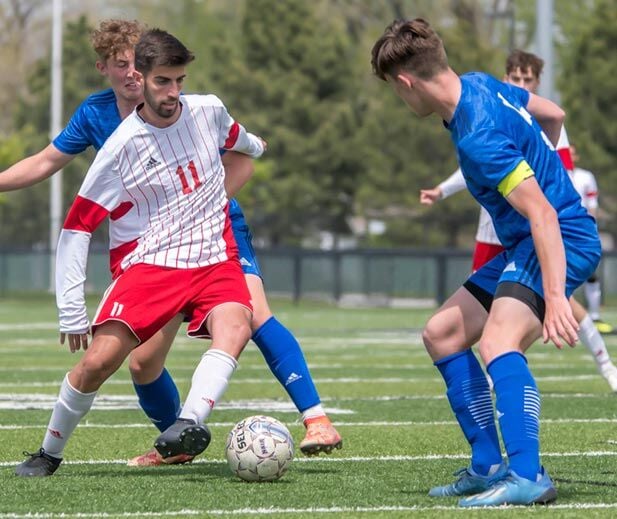 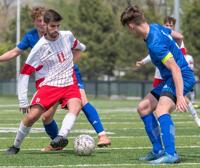 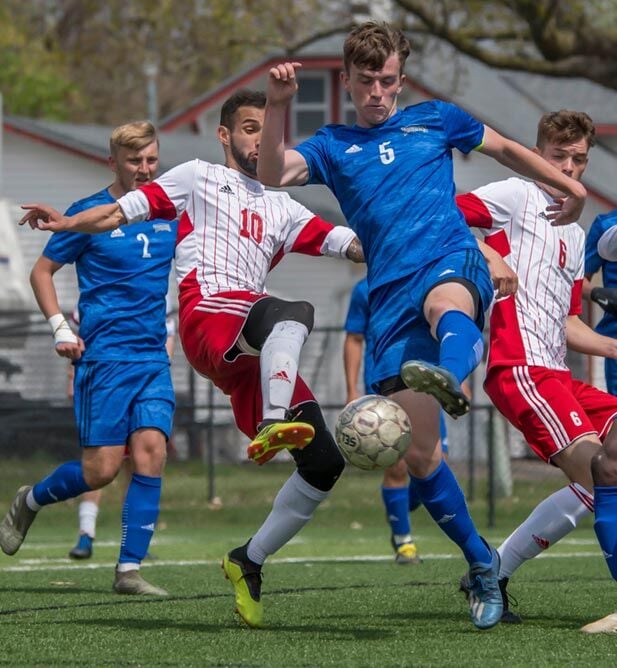 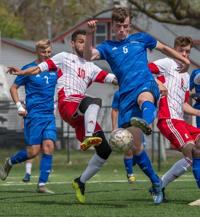 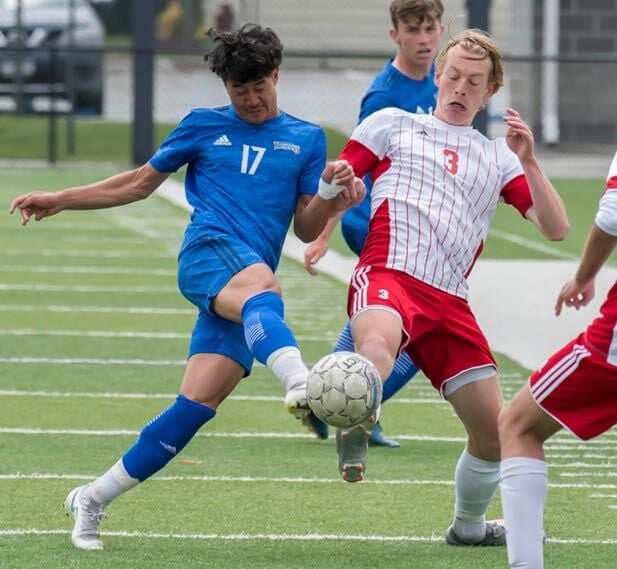 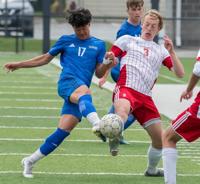 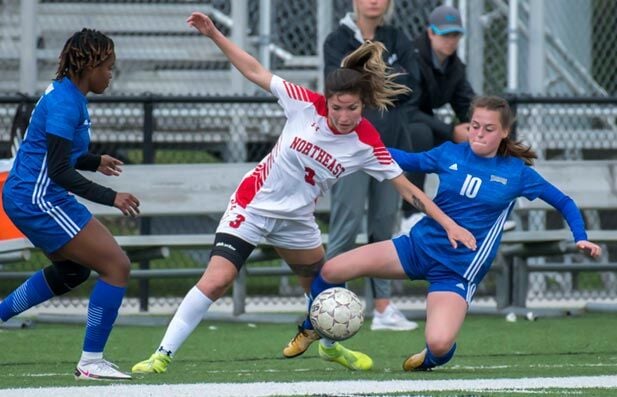 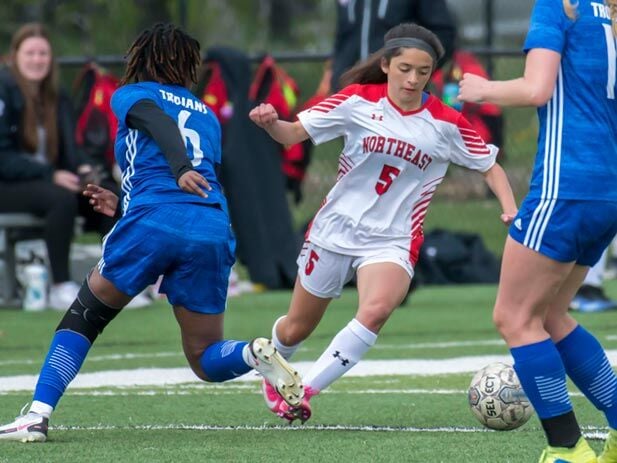 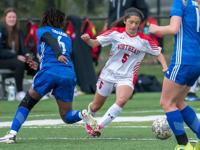 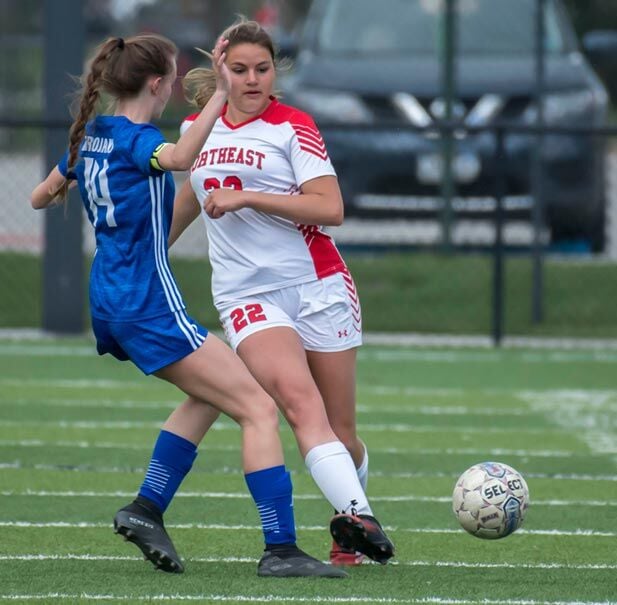 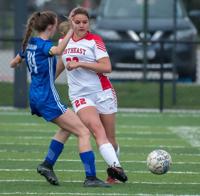 Northeast Community College's Samuel Holland (second from left) is mobbed by teammates after hitting the go ahead goal with seconds on the clock against North Iowa Area Community College Wednesday at Memorial Field.

The men's first matchup ended in wild celebration with fans out of their seats, jerseys tossed into the air and Hawks players piled on top of each other. Jyson Breitbarth, the hometown goalkeeper, sprinted the length of the field to join his teammates’ elation, sliding on his belly at midfield. This euphoria was the result of a Sam Holland penalty kick that hit the corner of the net to give Northeast a 2-1 lead with only 15 seconds remaining.

"Once Hugo (Santos) won the free kick, I knew it was my time to shine." Holland said with a humble smile and an English accent. "The keeper stood to the right side so I thought I'd go for the top corner; lucky it went in."

Coach Chad Miller had to rein in his squad to close out the final seconds of play.

"He (Holland) is quite the sharpshooter when it comes to those,” Miller said. “He does it in practice all the time. When that foul happened, and Sam stepped up to the ball, it was a good feeling. He's just kind of magic with those shots."

Northeast maintained pressure throughout the first half. An initial penalty kick, awarded to Santos, glanced off the crossbar. Soon after, Santos sighted Carlos Jimenez streaking down the sideline. Jimenez crossed it over to David Evans Jr., whose shot rang the left post. Finally, a first goal landed home at 15:15 on a precision corner-kick by Santos.

"I actually think it was an own-goal. I just crossed, so I can't take credit for that." Santos said, giving thought to Holland's game-winner. "My boy, like he said, it was his time to shine tonight."

The visiting Trojans came out aggressive after the break. Arath Medina netted a ball early for NIACC to even the score 1-1. Breitbarth, the Hawks’ first-year net-minder, made a number of sure-handed saves and diving two-handed efforts to keep the score even.

"It's always easier to play soccer when you have a great back line. I made a few saves in the second half, but those were easy saves," said Breitbarth, who performed the midfield belly-slide with Holland's game-winner. "If it wasn't for the back line doing their job, then I wouldn't be able to be doing mine."

In the second match, the Northeast women came out strong. The Hawks played a physically tough first half. Early on, Northeast made the most of an early opportunity as Naomi Pedroza dribbled through the middle, "My sister (Naomi) split the defense. We needed to finish all the chances we could take," Sara Pedroza said. "That was the only finish we had, so it really came in clutch."

Naomi passed to Sara as a foul seemed to have taken place.

"She (Naomi) got fouled but, somehow, still passed to me,” Sara said. “I shot it, and also got fouled at the same time; they counted the goal."

Play was halted at 22:35 because of weather conditions. Thirty minutes later action resumed.

Hannah Cherven said, "We knew that No. 10 (Celine Witt) was pretty fast, so we played a staggered defense. That means one of us steps to her, and one of us drops back to respect her speed and make sure we shut her down as soon as possible."

Cherven and the Hawks defense celebrated a shutout.

"We had Riley Gilbert and Brianna Mendias on our outside. They controlled the outside and shut everything down. We also have Kenzie (Mackenzie Byrnes) backing us up."

Chickens not always on best behavior

Dogs and cats are not the only members of the animal family that sometimes seem like quasi family members. Chickens, too, can mimic human characteristics — for better and for worse.

MADISON — Farmers and ag producers should get ready for a consumer-driven economy, with consumers wanting more say in how their food is produced.

Nebraska fans were able to get up close and personal with a few coaches and former players at the Midtown Events Center in Norfolk.

Both Nebraska assistant football coaches Greg Austin and Mike Dawson had plenty to say about those on the offense, defense and special teams at the Big Red Blitz on Wednesday in Norfolk.

It took moving more than 500 miles, overcoming a plethora of off-the-court issues and leading a team often dismissed as an afterthought, but Madison High School’s Jakwon Webb has made a name for himself in Northeast Nebraska and completed quite the turnaround to do so.