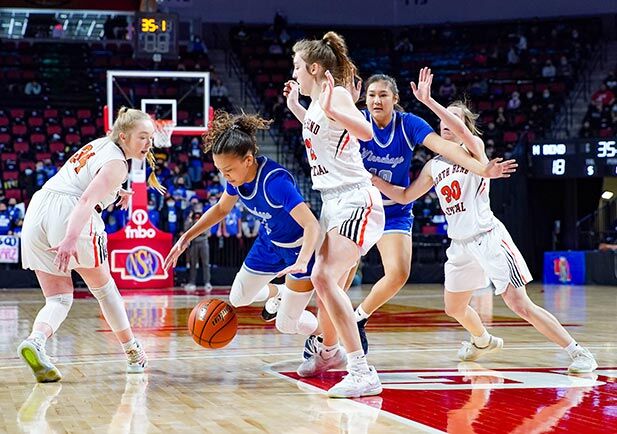 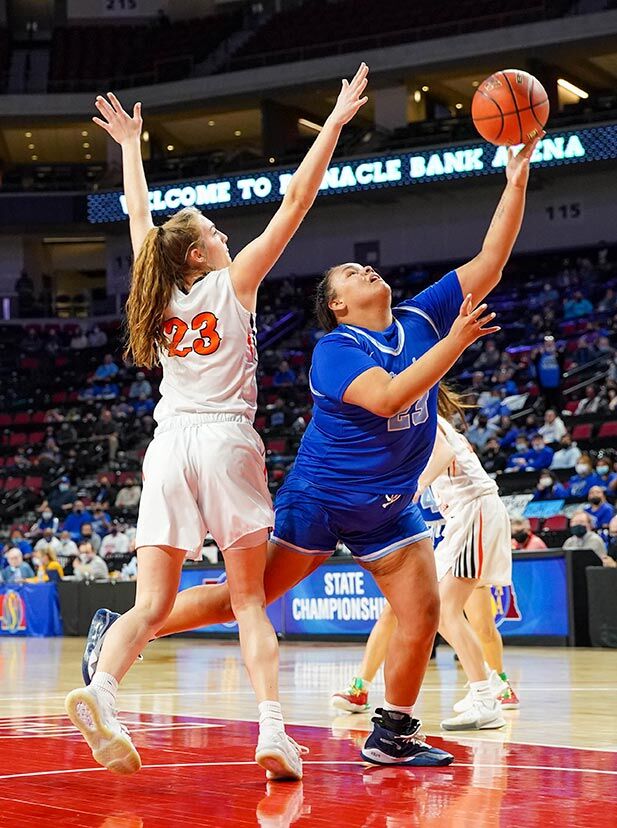 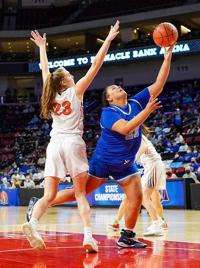 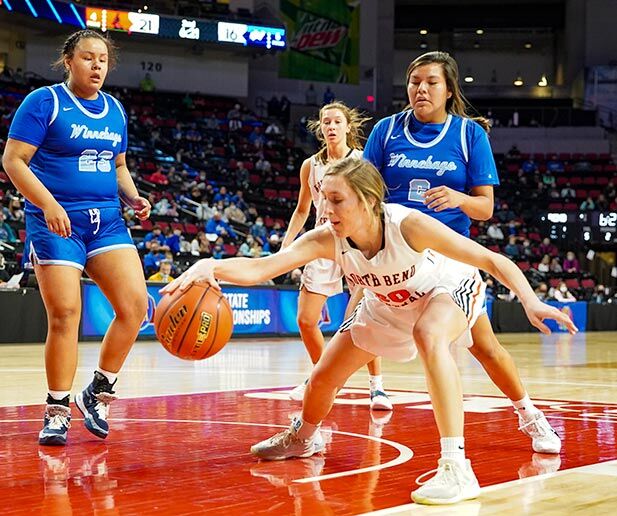 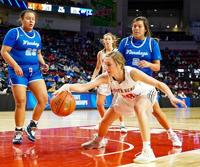 Avery Kelly of North Bend Central reaches for a rebound 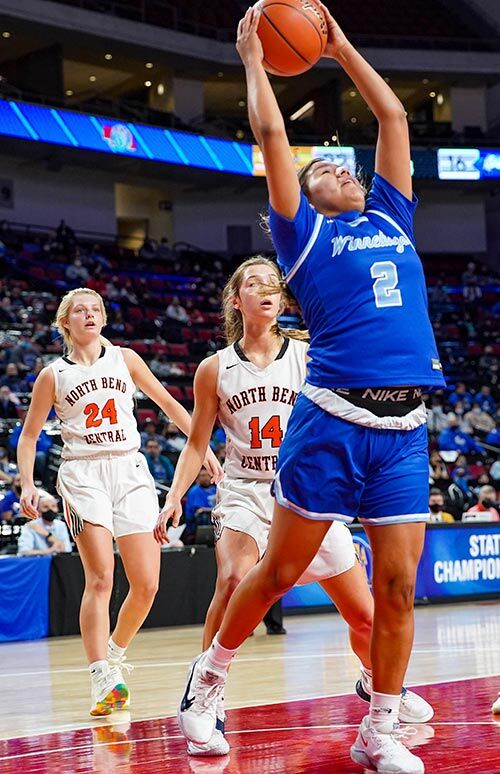 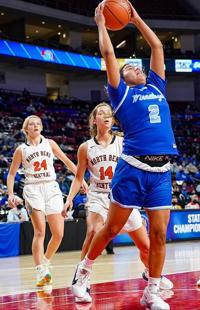 Sinya Harlan of Winnebago gets a rebound 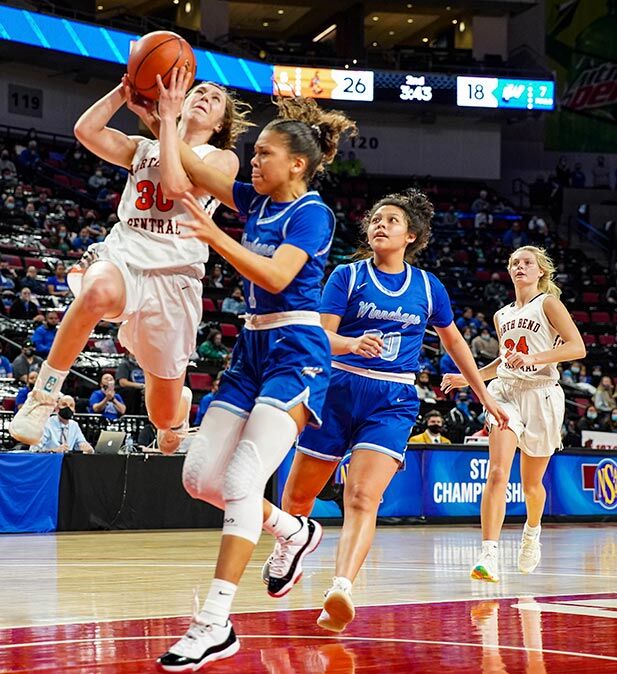 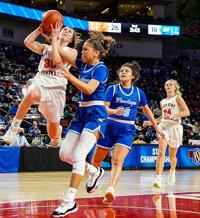 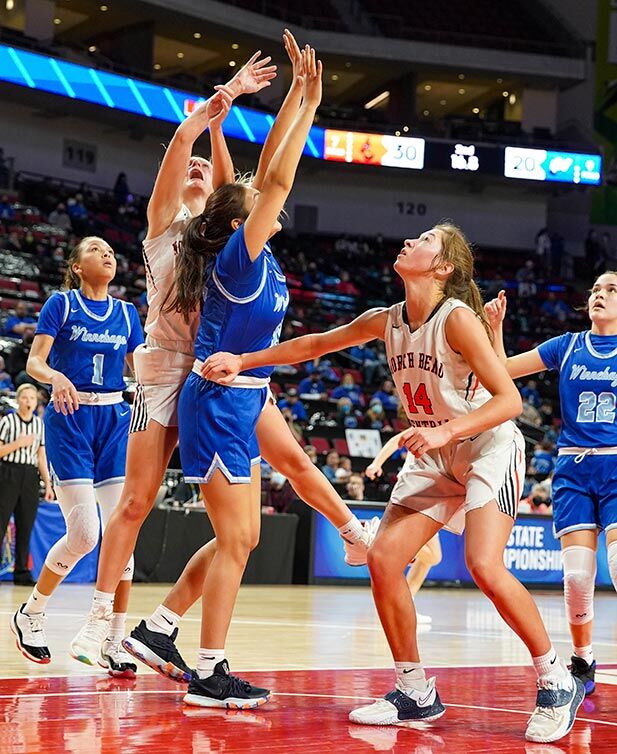 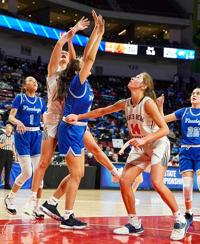 Avery Kelly of North Bend Central reaches for a rebound

Sinya Harlan of Winnebago gets a rebound

With the win, North Bend kept its hopes of a repeat state championship alive.

The Tigers threatened to blow the game open early. Kaitlyn Emanuel's steal and layup put the Tigers on top 9-3, but Winnebago answered with a Madeline Cleveland layup and Natasha Deal 3-pointer to pull within one.

The teams traded buckets for most of the rest of the quarter. Winnebago's Sinya Harlan brought the Indians to within two with a layup at the 1:25 mark. But the Tigers closed the first quarter with back-to-back 3s from Emanuel and Madelyn Gaughen to take a 21-14 lead into the second quarter.

Winnebago had difficulty generating offense in the second quarter mainly due to North Bend's man-to-man defense, but also, the Indians were handicapped when guard Sylvia Valentino picked up her third foul just a minute in and had to sit on the bench for the remainder of the period.

Sydney Emanuel's free throw triggered a 9-2 run during which North Bend converted all four of its free throws while Winnebago went 0 for 4.

The Indians struggled for more than five minutes without a score before Ciarra Frenchman made a pair of free throws just before halftime. The Tigers led 32-20 at the break.

The third quarter was the Sydney Emanuel show. The North Bend junior guard outscored the entire Winnebago team 10-6 in the period as the Tigers continued to attack the basket and the Indians settled mostly for 3s.

North Bend led 46-26 after three quarters and Sydney Emanuel added an exclamation point to her game early in the fourth with four more points — including an amazing move to the basket that included a reverse pivot, splitting two defenders and laying the ball off the glass.

Reserves played the final four minutes and North Bend advanced to the C1 state title game for the second straight year with a final score of 60-40.

Sydney Emanuel led the Tigers with 25 while her sister Kaitlyn had 11. Deal paced Winnebago with 12 and Keisha Snyder added nine.

Winnebago will play in Saturday's third-place game against the loser of the Lincoln Lutheran-Hastings St. Cecilia game at Lincoln Northeast beginning at 9 a.m.

The Tigers will take on the winner of that contest for the championship on Saturday beginning at 10:45 a.m. at Pinnacle Bank Arena.

Neihardt given laureate title 100 years ago

BANCROFT — The small man with the thatch of wavy brown hair sat on the ground, bent forward, listening intently as the old man sitting next to him spoke in a language the younger man didn’t understand.

Knox County could become a new tourist destination in Nebraska, if the Legislature passes a new bill.

The racing career of Kim Lingenfelter: A look back

Bob Haase, the longtime owner and operator of Riviera Raceway in Norfolk, in describing the top drivers who ever raced at Riviera, called Norfolk driver Kim Lingenfelter “the smoothest driver he ever saw.”

What’s new at Off Road Speedway this season

The changes for the 2021 racing season at Off Road Speedway don’t include any adjustments to the track itself but instead emphasize what promoter Jerry Pospisil describes as “an emphasis on family-oriented entertainment.”

Jeff Schipper drives a car pool — in the most literal sense of the term.

Longtime Christian retailer to close if buyer not found

Tim Worstell wants his remaining time at The Abbey Christian Store be a positive experience.

Your mind is yours: Take responsibility for it

Every time I just can’t stop myself from eating too much candy, I would like to blame the candy manufacturer. Wouldn’t that be reasonable? After all, if the candy manufacturer hadn’t bombarded me with advertisements touting the deliciousness of its product, I never would have indulged in the…

"I told you not to use Gorilla Glue on your false eyelashes!"

Tracey Schmidt
was this week's winner.