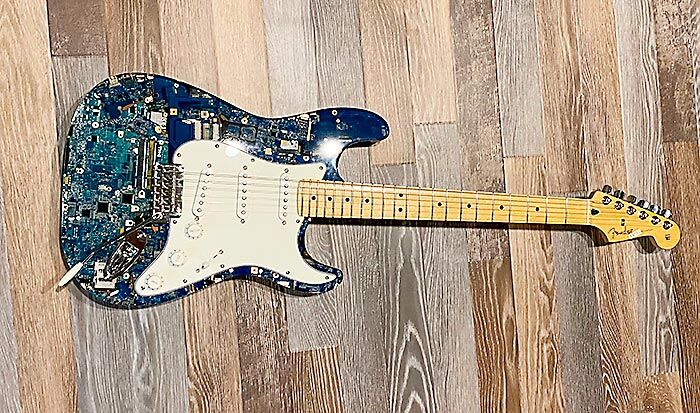 THE INTELOCASTER took King about 50 hours to build. The guitar was built using 20 Intel processors from an old laptop belonging to one of King’s friends. 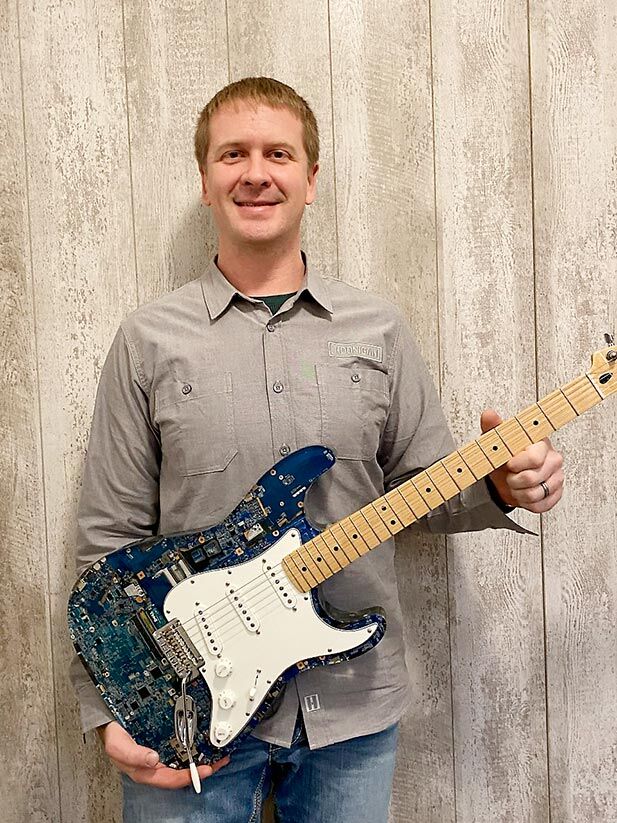 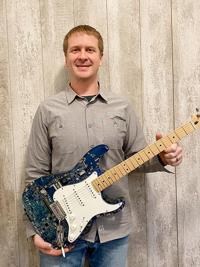 BRIAN KING poses with his most recent guitar, the INTELocaster. King has built about a half-dozen guitars, as well as an assortment of cutlass engines.

THE INTELOCASTER took King about 50 hours to build. The guitar was built using 20 Intel processors from an old laptop belonging to one of King’s friends.

BRIAN KING poses with his most recent guitar, the INTELocaster. King has built about a half-dozen guitars, as well as an assortment of cutlass engines.

Brian King keeps adding to his collection of self-made guitars.

His latest undertaking? A guitar made of Intel processing chips dubbed “INTELocaster.”

Weighing 20 pounds and fully functional, the INTELocaster was completed a few months ago. King built it using 20 Intel processors, and he estimated the project took nearly 50 hours to complete.

King has created a collection of more than a half-dozen guitars — including a clear-bodied Flying V and a violet B.C. Rich guitar. In 2019 King built a guitar out of 4,000 M&M’s. (Read that story here.)

The inspiration behind the INTELocaster? The opportunity to try something new.

Assembly of the INTELocaster took place in King’s garage workshop, which includes all the equipment he needs, as well as some car projects he’s done.

The process involved taking apart a Fender guitar, creating a mold from it, then adding the Intel chips and epoxy to the mold. The biggest thing, King said, was to get a pressure box built to squeeze all the air out of the epoxy.

Then, King said, he drilled holes for the guitar neck and reassembled the guitar. Finally, he wet, sanded, polished and buffed the guitar with a buffing compound for peak shine.

“The biggest challenge was when I was doing the cuts around the edges, trying to make them resemble the original guitar,” King said. “There are tons of holes and pocket holes that have to be drilled out to fill the electrical components. It was also difficult dialing in the neck of the guitar.”

One of King’s three children occasionally jumped in to help in assembly of the INTELocaster. While his children have helped him on a number of his projects, he said that doesn’t necessarily mean his kids will take up the same projects as his someday.

“It’s just something where they think, ‘Dad’s kind of crazy, building stuff again,’ ” he said. “Let’s see what we can do to help.’ ”

King likes to keep the guitars for his collection after building them, although he put up the M&M's guitar on Facebook a couple of years ago to see if anyone was interested in it. He’s also received a few offers for the INTELocaster, but King enjoys keeping his guitars as “wall hangers.”

And he doesn’t just build guitars.

In addition to the INTELocaster, last year King built an LS Cutlass engine out of Plexiglas, a see-through V8 engine build and an epoxy wheel build.

The work King’s done has garnered quite the internet following. His “AWD Cutlass” Facebook page has more than 135,000 followers and his YouTube following has approached 13,000 subscribers.

“I started sharing my projects on Facebook several years ago and it’s really taken off,” King said. “I didn’t expect that this many people would be so involved in what I do.”

All of King’s projects are done during his spare time when he isn’t doing full-time work as a mechanic or doing paintless dent repair.

He doesn’t have any specific future projects planned, but King’s next creation will likely be some sort of carbon fiber counter project, he said.

“I might cook up something unique again, but sometimes you just go where your mind takes you.”