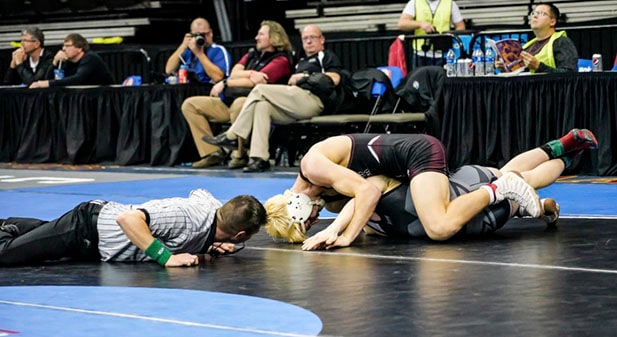 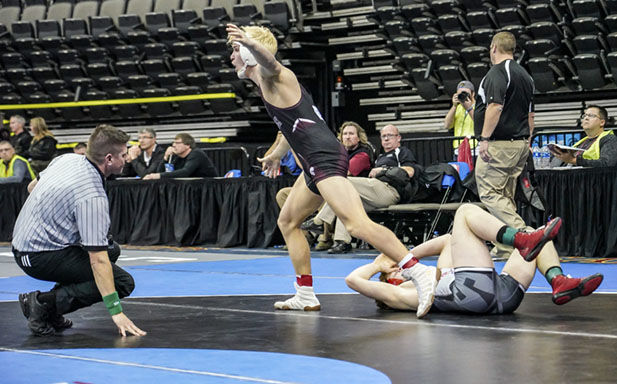 Aaron Beckman/Daily News Joshua Licking of Norfolk celebrates his pin over Scott Robertson of Millard South during the class A 152lb quarterfinals. 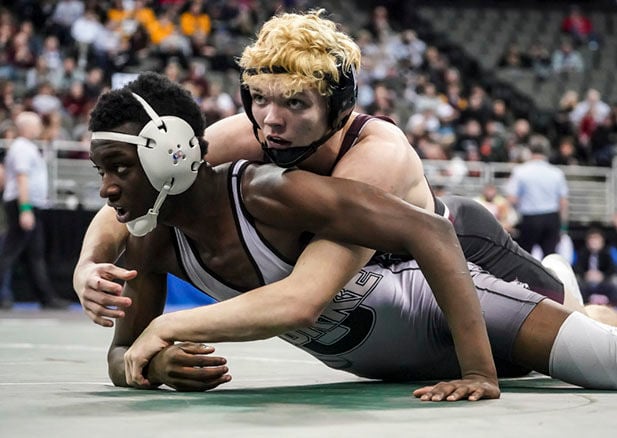 Aaron Beckman/Daily News Brayden Splater of Norfolk looks towards his coachÕs as he wrestles Deson Stapleton of Omaha Burke during the class A 160lb quarterfinals. 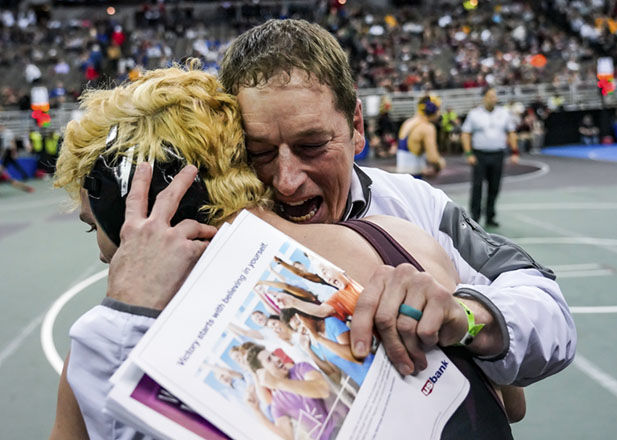 Aaron Beckman/Daily News Joshua Licking of Norfolk celebrates his pin over Scott Robertson of Millard South during the class A 152lb quarterfinals.

Aaron Beckman/Daily News Brayden Splater of Norfolk looks towards his coachÕs as he wrestles Deson Stapleton of Omaha Burke during the class A 160lb quarterfinals.

OMAHA — Three of 14 Norfolk city wrestlers won two matches on Thursday to qualify for the state semifinals and clinch a spot on the medal platform on the opening day of the state high school wrestling tournament at CHI Health Center here.

Lutheran High Northeast's lone qualifier, Jazper Ames, came into the Class C 195-pound tournament having battled injuries all year. The junior opened with a 9-0 major decision over a district champion, Brandon Beeson of Tri County, then followed it up with a hard-fought 5-3 win over Nolan Schulz of David City Aquinas.

Ames led 3-2 with less than a minute to go in the match. With both wrestlers on their feet, Schulz got Ames in a headlock.

“I thought he was going to pin me with the headlock,” Ames said. “My coach warned me before to not let him throw me in the headlock. I was getting pretty dizzy. It was pretty tight, but I just stuck in there, stuck my hips down and started working him the other way and he let go because it was hurting his arm or something.”

The takedown gave Ames a 5-2 lead. A late escape made the final score 5-3.

“Jazper has battled a lot of things this year; he's a really great wrestler,” Lutheran High coach Adam Thompson said. “He just came in ready to wrestle today. He was really prepared.”

SIX OF the 10 Norfolk High wrestlers who qualified for the state tournament won their first-round matches, and two of those won their quarterfinal contests as well in leading the Panthers to eighth place in the Class A team race after day one.

“But man, we came out and wrestled. I like how we're competing, but we expect to win those close ones. We've been working hard on that the last couple of weeks. It hurts.”

Panther 152-pounder Josh Licking trailed Millard South's Scott Robertson 3-0 midway through the second period, when the Norfolk wrestler scored on a takedown and worked a nearside cradle to put Robertson on his back.

It took a little more than a minute before the referee slapped the mat signaling a pin for Licking and a spot in Friday's semifinals against Omaha Central's Deon Davis.

“Josh beat the kid we lost to in state duals from Millard South,” Grey said. “So, for him to go out and get a pin, huge for him, huge for our team, and I think Josh Licking should be in the finals.”

Licking said he felt confident going into the match. “It's pretty hard to beat somebody twice in a row, but that dude's pretty crazy tough. Pretty awesome win.”

Licking was asked about the move that led to the pin. “That's just something you make up with your little brother when you're wrestling around at home,” he said. “He shot in, I just gave him a little bit of hip pressure, knocked him on his hip a little bit.”

Splater scored two with a first-period takedown. The Panther senior then took the bottom position for the second period but was unable to score.

Splater had the top for the third and gave up a reversal early, which tied the score at 2.

“I just had to keep my mind mentally strong and just continue to wrestle no matter how much time was left,” Splater said.

Surprisingly, Stapleton allowed an intentional release escape that gave Splater a 3-2 lead. Even with the late lead, Splater did not employ a defensive mindset, spending the remainder of the match in attack mode.

“I'm just so happy for him because he had a rough year last year,” Grey said. “He had a tough draw (at state), but he's just hungry. To see Brayden Splater come down here and win that first match, win the second match, he's a state medalist now!”

Four others — Calvin Empkey, Aaron Dittmer, Hunter Mangelsen and Laikon Ames — all started the tournament 0-1. All eight will compete on the consolation side of the bracket beginning Friday afternoon.

“Three hundred sixty-five days ago, we had a mission to come back down here and change our luck, and the guys put in the time and hopefully that continues to show up for the rest of the tournament,” Grey said.

NORFOLK CATHOLIC senior Wyatt Smydra had his dream of a state title come to a disappointing end on Thursday with a 5-4 loss to Cameron Schrad of David City Aquinas in the opening round of the Class C 145-pound bracket.

“It was a last-second loss,” Norfolk Catholic coach Henry Aschoff said. “We were ahead with nine seconds to go and we relaxed. Schrad got in on a takedown and drug his toes and that's two.”

Smydra, who made the semifinals a year ago and earned a fifth-place medal, will need to win three matches in the wrestle-backs to garner a spot on the medal platform on Saturday.

Aschoff said he has no doubt that Smydra is up to the task. “Wyatt will come back. He's a strong-minded kid. We've talked about it already. One match at a time and we'll see how far we can go,” he said.

Smydra's teammate, 138-pounder Allan Olander, trailed 4-0 after one period but started the second period in the top position and immediately put Austin Cole of Broken Bow to his back. The Knight recorded a pin in 2:43.

“Out of the three guys down here, if you'd have told me beforehand who has got the best chance of winning, I would've said the other two,” Aschoff said.

“But it was a big win for Allen. He had a tough kid (Christopher Nickolite of David City Aquinas) there in the quarterfinals (lost by pin in 1:49),” Aschoff said.

“But by winning that first match, his route to get into the heartbreak round and see if he can find himself sneaking into the bottom side of the medals is a lot more reasonable than it would have been had he lost his first match.”

The third Knight to qualify for state, Francisco Mendez, lost in the opening round at 160. “We've just got to come back and wrestle,” Aschoff said. “We're going to take one match at a time with Fran and see what we can do and get him fired up to go.”

Norfolk baseball and softball teams to start in June

Man sentenced to prison for strangulation

MADISON — A Norfolk man was sentenced to a prison term for assault by strangulation — second offense on Thursday in Madison County District Court.

Sermon summaries for Sunday, May 24

The motorcoach industry needs help getting off the struggle bus.