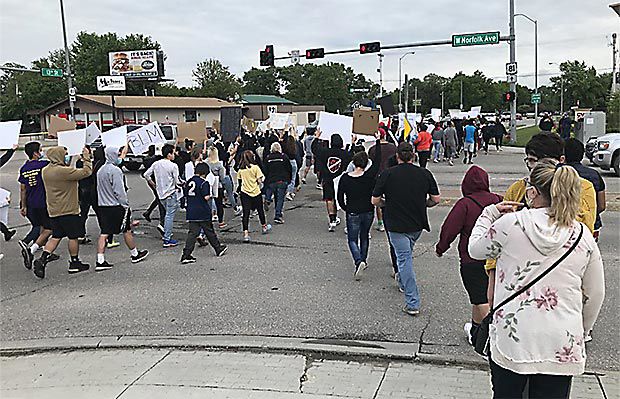 Some protesters head south on 13th Street across Norfolk Avenue about 7:15 p.m. on Saturday. 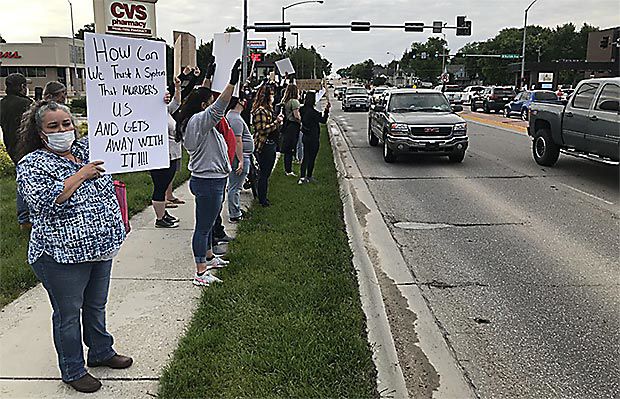 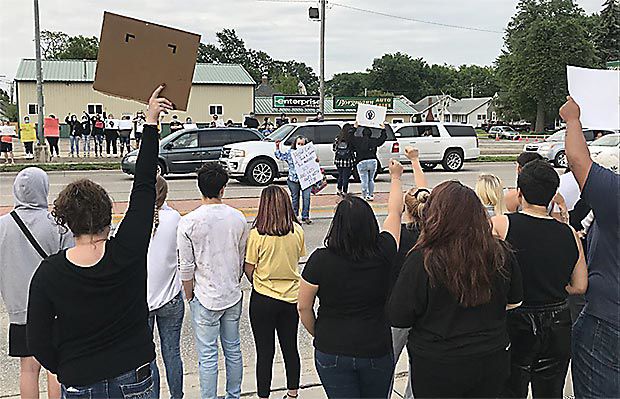 Some protesters stood in the median of 13th Street on Saturday evening for a few minutes. Norfolk police watched, but did not engage any of the protesters.

Some protesters head south on 13th Street across Norfolk Avenue about 7:15 p.m. on Saturday.

Some protesters stood in the median of 13th Street on Saturday evening for a few minutes. Norfolk police watched, but did not engage any of the protesters.

It began about 5:45 p.m. with just three people gathered at the Walgreen’s parking lot near the intersection of 13th Street and Norfolk Avenue. The scene has also been used for other protests in the past ranging from support of gay marriage to the Life Chain abortion protests.

By 6 p.m., the number grew to 20 people and then to 100 people by 6:30 p.m. Protesters spread out along the perimeter of the Walgreen’s lot and chanted slogans like “Black Lives Matter.”

By 7 p.m., the crowd grew to about 200 and then split up at 7:15 p.m. Most of them walked south along 13th Street. Eventually, some crossed 13th Street from west to east. A few stood in the middle of the median of the four lanes near the intersection, holding signs.

At least two uniformed Norfolk police officers could be seen at each of the doors of several nearby businesses, which were closed. Walgreen’s and CVS, which typically close at 9 or 10 p.m., closed at 5 p.m. An estimated 12 Norfolk police officers were visible in the area for several hours from about 5:45 p.m. to at least 8 p.m.

Eduardo from Madison was one of the organizers of the protest. He said he put it on social media and wasn’t sure how many would attend.

Protesters interviewed asked to only be identified by their first names.

Eduardo said he wanted to speak up for Mr. Floyd, but he had a lot of help putting the event together, including from Jalen.

“Last night is when we put it all together,” said Jalen from Madison. “Most of us have seen that video of George Floyd getting choked out by police. For me personally, it was very difficult to watch as someone with relatively the same skin color as me and the same race get treated like that. It felt unfair. We thought someone needed to stand up and do something about it.”

Jalen, who graduated from Norfolk High School, said he was pleased by how many people came together. Right from the start, he said the plan was for it to be peaceful.

“Anything that happens to get violent, we won’t want on us. We are going to be as peaceful as can be. We are holding signs. As long as people don’t agitate us, we will keep it peaceful,” Jalen said.

There were all colors of protesters. Most people appeared to be younger than 30.

Among the protesters who came out was Chad and his daughter, Sophia. He said they wanted people to know what happened in Minneapolis shouldn’t happen anywhere.

“Everyone should be here now,” Chad said. “That is not acceptable.”

Chad said he was surprised to see so many police officers and didn’t know if it was necessary.

“They are in the wrong town,” he said. “They should know. (Rioting) won’t happen in this town. I think these businesses must have closed early. Are they closed because of this? I am just wondering.”

Chad said he was happy to see all the people driving by honking as a way to offer support and justice for George Floyd.

Many of the people out protesting held signs that stated such things as “What does love look like? #Black lives matter,” “White silence is violence,” “No justice, no peace,” “End police brutality,” “End racism” and others.

Two of those who came out to protest were not Norfolk natives, but said they appreciated the diversity of the protesters.

“Big Shot” said he came out to protest against police brutality. Jonathan said he didn’t want to comment, but agreed with Big Shot.

“Black or white or Latino, it doesn’t matter. Everyone should have the same rights. We don’t think killing someone should be allowed. If you watch the video, you will know exactly what we are saying. He kept saying he couldn’t breath. This wasn’t the first time this happened.”

“Norfolk is a small city. It’s good to see a lot of people come back. It’s a good thing to see that black, white or brown — it doesn’t matter. We all came out together,” Big Shot said.

By 8 p.m., the protesters were beginning to spread out, with about 150 remaining around 13th Street and Norfolk Avenue. As it got darker, the number of protesters gradually declined but were still visible at 9:30 p.m.