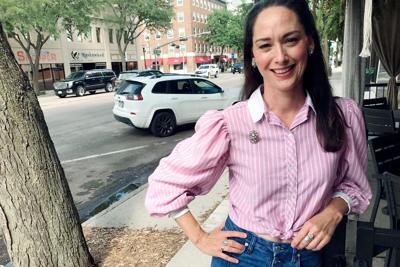 Coming back home to Norfolk has always been a highlight for Rachel Borgman.

So when the COVID-19 pandemic eliminated her job on Broadway in New York City, she decided to move back home and live with her parents, Roger and Renee Borgman. On Broadway, she works on shows as a union member on wardrobe.

And Norfolk has been even more fun and enjoyable than she expected. Since being back at the end of March, Borgman said she feels grateful for her family, Norfolk and Nebraska.

“I love Norfolk. It is a great community. It is just big enough that there are fun things and fun activities to do. However, it is small enough that it is safe and you can still let your kids go out and play and not worry about them, I believe.”

One of Borgman’s jobs in New York City was working on Broadway in wardrobe. Like everything else, COVID-19 shut down the hundreds of shows in the theater district.

“I was just sitting in my apartment. I wasn’t able to go to dance classes. So on a Thursday night, an old roommate of mine who happens to be from Lincoln called me and said she was driving back. ‘Do you want in?’ So I said, ‘Yes,’ and we jumped in the car on a Friday morning and we drove across the country.”

The first thing Borgman did was quarantine in her parents’ basement for two weeks. After that, she completed a couple of projects at her parents’ house.

Another of Borgman’s jobs in New York City is working for a scavenger hunt company.

The company she works for is called POGO events. Borgman got that job after retiring as a member of the Radio City Rockettes. She performed for 13 years and went on tours, including performances at the Omaha Orpheum Theatre.

During one of the Rockettes’ offseasons, the 1999 graduate of Norfolk High School took an event management and design class and then found the job with POGO events.

“I get to use my creativity and so I have been writing scavenger hunts for quite a while,” she said.

In New York, the hunts take participants to different parts, with trivia questions and help from others to find detours and roadblocks.

“There’s plenty of that in downtown Norfolk,” Borgman said. “You just got to think outside the box a little bit and do a lot of research.”

Borgman said she keeps the hunt limited to the downtown so people can complete it on their feet without using cars. It also makes it safer.

There are three different scavenger hunts in Norfolk. They also are continually changed.

Everything on the scavenger hunt is completed on an app on a phone.

Still, though, Borgman said she is looking forward to returning to the Big Apple, just as soon as Broadway reopens and her job returns.

“I do miss New York. I love New York. I will go back to New York again at some point when I can start working again, but Broadway isn’t projected until January now.”

Renewing friendships at home, the laughter of family and seeing how the downtown and other parts have changed are entertaining, she said.

“I’m so thankful that I had a place to go. I look at this like a gift every single day. You don’t usually get to go spend almost four months with your family at the age I’m at. It’s really fun to be living at home again and have Mom’s cooking. You get to know your parents in an almost different way.”

About the scavenger hunt and New York

Q: How long does one of the scavenger hunts take in downtown Norfolk?

Q: How does it work?

A: Everything is completed on an app. Once the timer ends after two hours, you cannot complete anything more. You will come back to the finish line and I will score you and we announce the winner.

Q: It this appropriate for all ages and groups?

A: Yes, it is family friendly and works for all ages. We do private parties, like birthday parties, corporate team building or a bachelorette party. We can also write it about a guest of honor.

A: Extra, extra, read all about it. This business was established in 1887. Head to this location and take a photo of you and your team that is worthy of the front page with the paper vending machine in the background. (Obviously, the answer is the Daily News.)

Q: So how does one learn about the scavenger hunts if they are interested?

A: They can email me at rachel@pogoevents.com.

Q: So what is New York like? And do you live in a high-rise?

A: It’s amazing. It’s fabulous. I just live in an apartment in Queens. I just moved to Queens.

A: Chicago is a mini-New York.

Q: How did you get the job at the Radio City Rockettes?

A: Well, I started dancing at the age of 3 right here in Norfolk. I went away and got a BFA (bachelor of fine arts) at Stephens College in Columbia, Missouri. I moved to New York after that, and I got the job with the Rockettes about a year and a half after that.

A: Yes, I have been pretty fortunate. I was always working some sort of dance job right from the start of living in New York City. It was a two-day process, and you have to be between 5-foot-6 and 5-foot-10 1/2 with no shoes on. They make cuts throughout the two-day process. I did that for 13 years and I retired. I performed all across the United States, across Canada, with Christmas tree lighting and parades. I even lit the Empire State Building.

Q: Holy smokes, you personally got to do it?

A: Yes, with three other Rockettes. They light the Empire State Building. So yes, that was a lot of fun. We got to go to the way top, too.