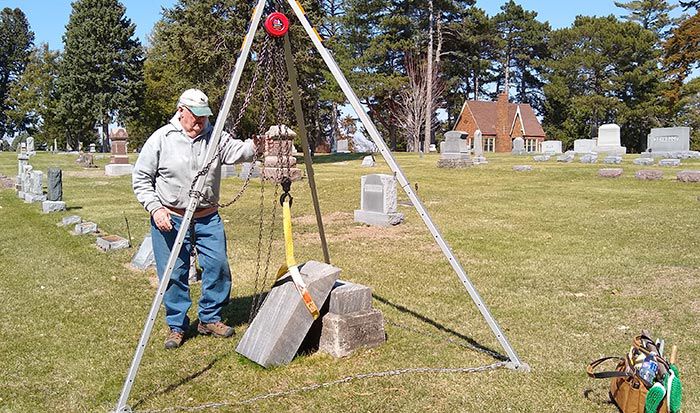 Jerry Nordeen, owner and operator of Monument Solutions in Norfolk. 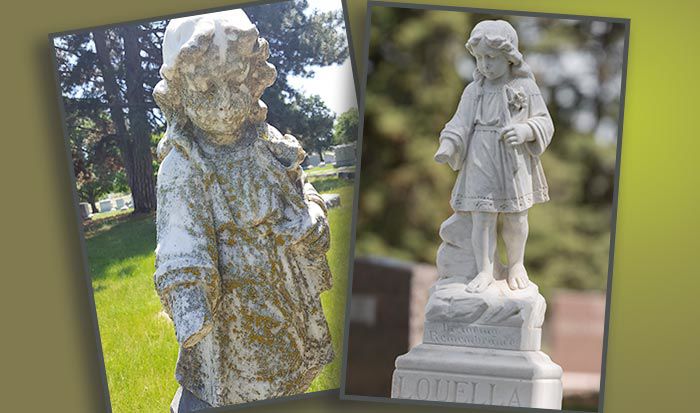 A statue at Prospect Hill Cemetery in Norfolk before and after it was restored.

Jerry Nordeen, owner and operator of Monument Solutions in Norfolk.

A statue at Prospect Hill Cemetery in Norfolk before and after it was restored.

As the owner and operator of Monument Solutions of Norfolk, Nordeen spends his time preserving granite, bronze and marble cemetery monuments — raising, re-leveling and repairing — and making the old look like new again.

It’s the kind of work he’d continue to do even if he won the lottery.

“I really take a lot of enjoyment from taking something that looks like it has been neglected for 100 years and making it look a whole lot better,” he said.

Nordeen said he didn’t intend for the work to become a business. He spent 15 years in the monument industry as a sales counselor with installation duties but said he was disappointed by the amount of repair, restoration and preservation work — especially with the more historical monuments — that was done.

One day he was working on his grandparents’ monuments when someone asked if he would do similar improvements to their family monuments.

From there, the business took off.

Nordeen said he works with cemetery boards, as well as individual families who need to have a loved ones marker restored.

He recently finished working with cemeteries in Wayne, Ponca and Lindsay. He uses a process to remove mold, mildew and lichen from old stones, but it’s more difficult to work with stones that have lost their lettering due to weather.

“If they’ve weathered so much the lettering is worn off, there’s not much I can do about that,” he said.

For monuments that have crumbling foundations, there is hope, he said.

“The ones that are 80, 90, 100 years old or more are a lot of times tipping. People used to be buried in a wood box, and the ground starts settling beneath,” he said. “Sometimes they’ve let them go so far as falling over.”

“I can straighten them back up, re-level them and give them a better foundation,” he said.

Nordeen said he believes its important to preserve the pieces of history, as well as honor the memories of those who already have passed on. He said he’s happy to see the reactions of those who’ve had their loved one’s monument restored.

“They can hardly believe what a difference we’ve made,” he said.

Drivers of all ages come and go every year into the Off Road Speedway in Norfolk to test the waters to see how they can matchup with competition.

Norfolk bars and restaurants are prepared to reopen to serve drinks today.

Strolling along Norfolk Avenue has always been an opportunity to window shop and people watch.

Meatpacker has worked well with department after initial conflict

The situation appeared to be bleak on April 17.

In Northeast and North Central Nebraska, like other parts of the state, there have been many directed health measures that have irritated Nebraskans.

MADISON — A Norfolk man was given probation for attempted possession of methamphetamine here in district court on Friday.