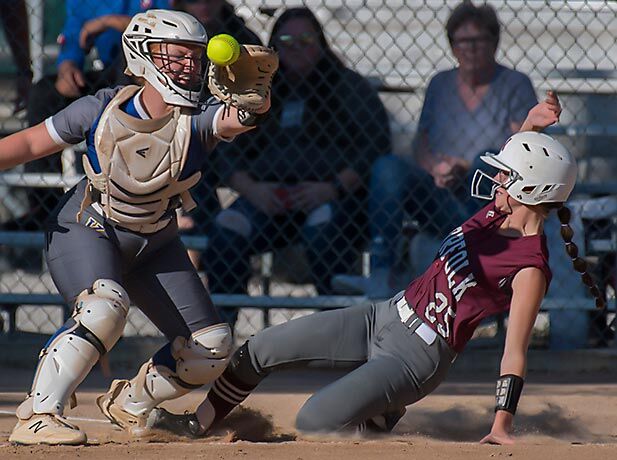 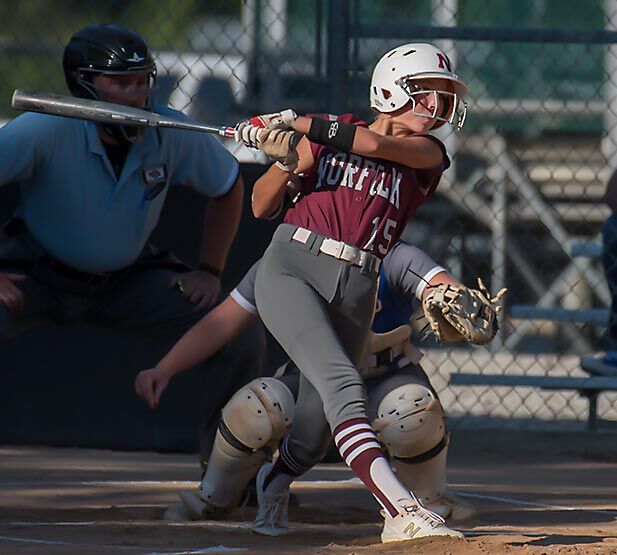 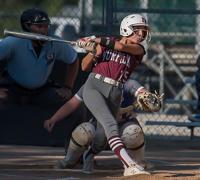 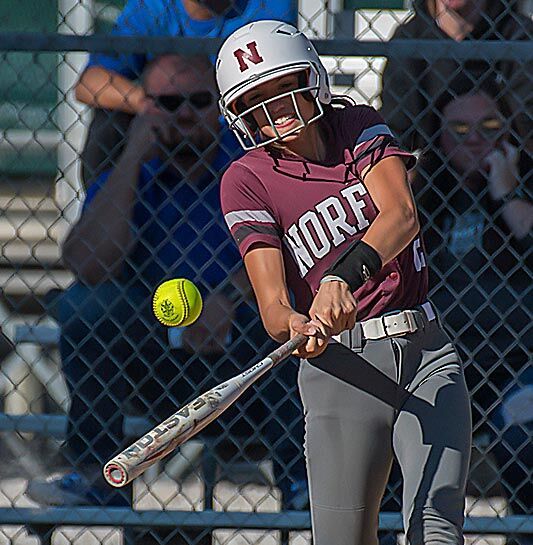 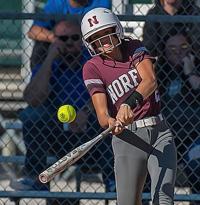 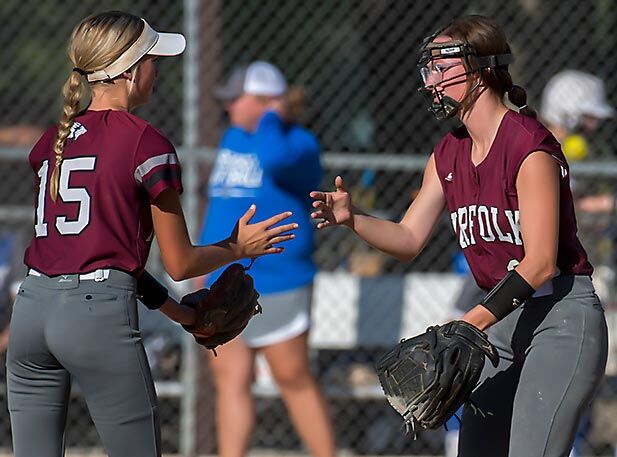 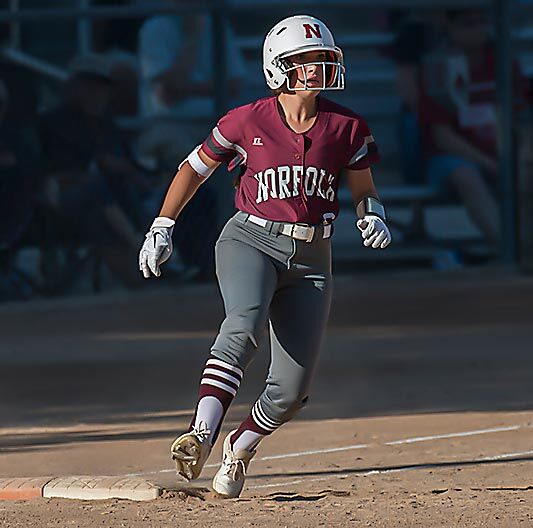 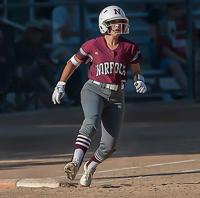 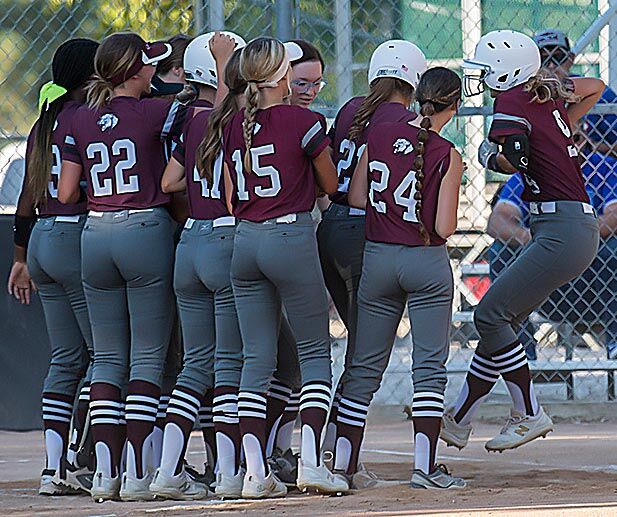 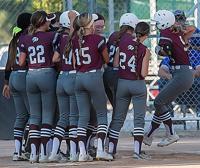 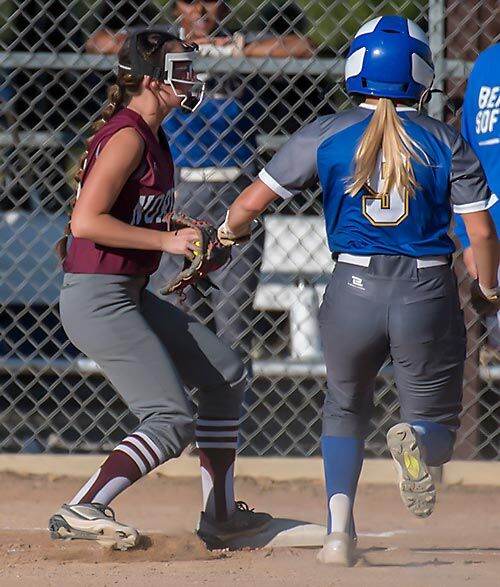 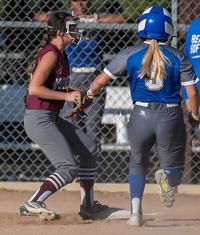 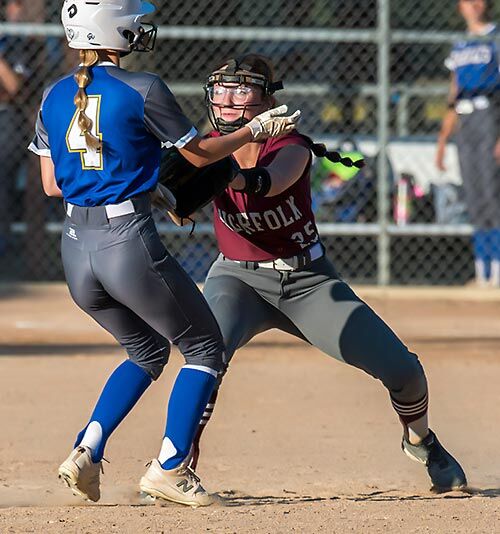 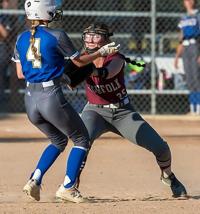 Norfolk softball coach Derek Siedschlag was happy to get a win on Tuesday, but it was easy to see he would have rather had two. After all, Siedschlag's Panthers came into the home doubleheader Kearney with a record of 12-7 while the visiting Bearcats stood 5-14.

Norfolk looked well on its way to a sweep after winning the opener 7-3, but Kearney turned the tables in the nightcap with a 10-2 score in six innings.

"One's better than none," Siedschlag said. "It's not a fun loss, but we've just got to make sure we learn from that kind of a loss. We can't let one loss define our season. We're playing good softball and Kearney came out, give them credit, they hit the heck out of the ball."

Norfolk got on the board first in game one by putting the ball in play and forcing the Bearcats to make plays.

Taylor Schmidt singled and advanced to second on an error. Payton Schnoor then singled to drive in Schmidt. Emerson Waldow then followed with a two-run homer — her third home run of the season.

The Panthers made it 5-0 in the third when Ava Borgman crushed a two-run shot over the right-center field fence.

Meanwhile, Norfolk pitcher Jessica Schmidt was cruising with a no-hitter through three before Kearney's Bella Molina opened the fourth with a towering shot over the center field wall.

The Bearcats cut the Panther lead to 5-3 in the fifth when Allie Lane drove in a pair of runs with a double.

Norfolk answered in the bottom of the frame. Schnoor singled to lead it off and advanced to second on Waldow's sacrifice bunt.

Miley Wichman was hit by a pitch to put runners on first and second before Borgman doubled to drive in Schnoor and send Kylie Baumgard — who was courtesy running for Wichman — to third.

Baumgard, a freshman, then made a heads-up play when, with one out, Jessica Schmidt flied to second baseman Emma Barker, who made the catch. But with Barker’s momentum carrying her into shallow right-center field, Baumgard alertly tagged at third and scored ahead of the throw to the plate to give the Panthers a four-run cushion.

Kearney threatened again in the seventh. Trailing 7-3, the Bearcats had runners on first and second with one out when Molina hit a scorcher at Norfolk shortstop Taylor Schmidt, who made the catch and stepped on second for a game-ending double play.

"I was just thinking base hits when I was up to bat and they just happened," Schnoor said. "I had three hits right in a row that were in the same, exact spot."

Borgman finished 2 for 3 with a homer and a double.

Jessica Schmidt worked the complete game in the pitcher's circle, allowing three runs on five hits while striking out five and walking four.

The second game followed a different script. Kearney used the same pitcher, Kelsey Choplin, who struggled in the opener but found her second wind in the nightcap.

Choplin allowed seven runs on nine hits in game one but shut down the Panthers in the second contest to the tune of two runs on four hits. Meanwhile, the Bearcats tallied 10 runs on 10 hits.

A scary moment occurred in the top of the fourth. Kearney led 2-1 with a runner on second and nobody out when Molina hit a sizzling line drive right at Norfolk third baseman Cydnee Hopkins. The ball violently caromed off her fielder's mask and she lay on the infield dirt for several minutes.

Hopkins said she didn't see it coming. "I kind of just put my glove up and it got my glasses and cut behind my ear," she said.

Medical personnel escorted Hopkins off the field under her own power, which was good news. But in even better news, she re-entered the game an inning later.

Norfolk struggled in the circle in the nightcap as three pitchers combined to walk seven Bearcats, including four in the fifth inning alone.

"We weren't hitting spots," Siedschlag said. "We were walking too many batters, we were down in counts and had to throw right down the middle and they're a good team, they're going to hit the ball."

Norfolk had its chances in game two. With a runner on in the fourth, freshman relief pitcher Kierstyn Linn, in her only at-bat of the night, crushed a ball that appeared to be sailing over the right-center field wall. But it just missed leaving the yard as Bearcat right fielder Leah Becker hauled it in with her back against the fence.

Then needing one run in the sixth to prolong the game, Norfolk had runners on first and third with two outs when Taylor Schmidt blasted a pitch toward left field.

Like Linn's ball, it appeared to be gone, but left fielder Brooklyn Amend made the catch at what would have been the warning track to end the game. Had both of those balls traveled another foot each, Norfolk would have scored five additional runs and it likely would have been a whole different ball game.

"That definitely was not how we wanted it to be or how it should have been, but all we can do is just grow from it," Schnoor said.

Norfolk is now 13-8 and will visit Lincoln High on Thursday. The contest with the Links was originally scheduled to be a doubleheader, but at the request of Lincoln High officials, it was reduced to a single game.

Jim Monk’s goals in life and business are simple.

The Norfolk Catholic Knights forced a turnover on downs, then scored on their first play of overtime to knock off the Class C No. 2 Oakland-Craig Knights 20-14 on Friday at Norfolk Memorial Field.

Woman sentenced to prison for stealing alcohol, other items from business

MADISON — A Norfolk woman was sentenced to prison on Thursday after pleading guilty to a theft charge stemming from an August incident.

VALENTINE — The 26-year-old man accused of killing 52-year-old Ruth Wittmuss in August pleaded not guilty on Friday to charges of first-degree murder and use of a deadly weapon to commit a felony.

Norfolk man who stole car gets testy with judge in court

MADISON — A Norfolk man who wished to be sentenced on Thursday after pleading guilty to theft wasn’t happy when a judge denied his request.

LINDSAY — Two residents would like to develop housing in Lindsay.

Every death and tragedy matters

A few days after 9/11, a bridge collapsed in Texas, killing eight people. An NPR story that I heard on the radio this week spoke about how the incident was overshadowed by the thousands killed in the 9/11 attacks.