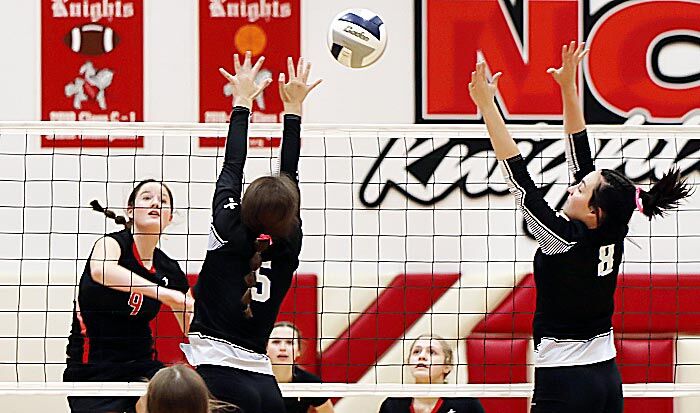 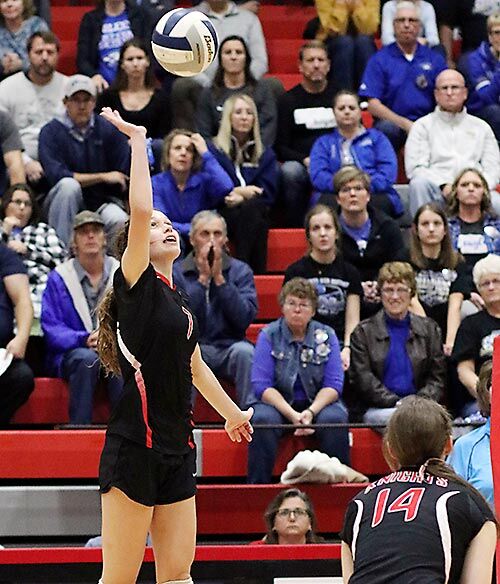 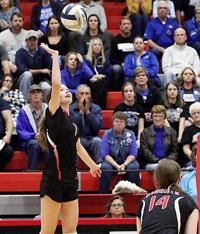 "Lutheran High is a great team tonight and dug up a lot of our balls, but I thought our girls did a good job of staying aggressive for the most part," Norfolk Catholic coach Michaela Bellar said.

The two sides battled back and forth in the first set that saw 10 ties and three lead changes. A Mia Furst kill gave the Eagles their biggest lead of the set, 17-13. But the Knights answered with a 4-0 run. Letizia Fumagallli's ace serve tied it at 17.

Another Furst kill sent the advantage back to Lutheran High, and it stayed that way until Avery Yosten's back-to-back blocks gave the Knights a 22-21 lead.

A pair of Lutheran High errors gave Catholic a set point at 24-21 before a Kendra Petersen kill and Amber Bockelman service ace pulled the Eagles within one at 24-23.

Addison Corr then took advantage of the Knights' third set point with a kill off of Saylor Fischer's set to give Norfolk Catholic a 25-23 win and a 1-0 advantage in the match.

Despite the setback, Lutheran High coach Kathy Gebhardt told her players they needed to stay focused on what was ahead of them. "We just tried to say, 'Whatever happened that last set that didn't go right, you've got to let it all go. It's behind you, forget it. All you're doing is looking ahead. You work together as a team and you fight for the next point.’ ”

The Eagles heeded their coach's advice by opening up the second set with a 7-1 run. But Norfolk Catholic scratched and clawed its way back into it. Lutheran High maintained the lead until Allison Brungardt crushed an overdig to the other side of the floor to tie it at 18.

Lutheran High called timeout and came back swinging. The Eagles closed out the set on another 7-1 run. Furst's ace serve ended the set at 25-19.

"This team is the team that was always so close but couldn't quite finish the sets,"  Gebhardt said, "and I think we did finish two sets here tonight that we could have let slip away and we didn't. We went out and finished them."

Both teams, on Tuesday, relied heavily on players who were playing through pain and, coincidentally, both wore the jersey No. 9.

Norfolk Catholic middle Avery Yosten battled a pulled hamstring. "I'm proud of her for toughening it out because I knew it was bothering her at the beginning,  but she toughened up and was able to play a great game for us," Bellar said.

"I was just trying not to think about it and play for my team," Yosten said.

Meanwhile, on the Lutheran High side of the net, setter/outside hitter Lauren Buhrman played through an injury she suffered during Monday's semifinal against Elkhorn Valley. "Lauren battled a pretty swollen ankle and she gutted it out out there and was doing everything we were asking her to do," Gebhardt said.

The third set was all Norfolk Catholic. The Knights never trailed. Senior middle Tiffani Peitz finished the set with two blocks and a kill to give her side the 25-15 win and a 2-1 advantage in the best-of-five match.

Lutheran High never trailed in the fourth set and led by as many as seven. Furst's kill from the back row made the score 21-14. Later, Norfolk Catholic fought off a pair of set points. The Knights' Morgan Miller won a joust at the net to pull her team within 24-22. But another one of Furst's 28 kills ended it and sent the subdistrict final into a deciding fifth set.

Fischer said that during the Norfolk Catholic huddle between the fourth and fifth sets, her coach stressed defense. "She said we can't let them go on runs. We just have to get it done right away, one and done mindset every time," Fischer said.

The Knights never allowed the Eagles more than a 2-0 run during the entire fifth set. Meanwhile, Norfolk Catholic took the early lead with a 5-1 run. Yosten's kill made the score 6-2.

Later on, another Yosten kill gave the Knights a 13-9 advantage before kills by Furst and Buhrman pulled the Eagles to within two.

Brungardt then scored for Norfolk Catholic with a kill off the block before a Knight service error and another Buhrman kill made the score 14-13.

Brungardt then made the third match point count when she found an open space on the opposite side of the net to give Norfolk Catholic the 15-13 win and the subdistrict title.

"Alli did a great job tonight," Bellar said of Brungardt. "I thought she really stepped it up and had a lot of great swings, but she also had some great passes in serve-receive that really helped get us going and being able to do what we wanted to do."

Despite the loss, Gebhardt could not have been more proud of her Eagles. "We asked them to go out there and compete tonight, to battle with everything they had and I think they did.

"That's the best I think we've played all season. Obviously, there were a few errors here and there, some things maybe we could have fixed, but overall, I think they played great volleyball. Both teams did, and it was a very tough match."

The four Lutheran High seniors were all instrumental in helping the school win the 2020 state championship. And all four — Furst, Buhrman, Bockelman and Alyssa Marotz — led the way on a team that had lost seven talented seniors to graduation.

"We started off as a group of girls that didn't play together before and we ended as a really good team and I feel like this game really proved to us that we could have done it." Furst said while trying to hold back tears.

While happy to be part of the winning team, Corr summed up the dynamics of the rivalry involving players that all share the same hometown. "It's very nerve-wracking because we're so close to some of the girls on that team. It's hard, but we just have to come out there and give it our all," she said.

Bellar said she was proud of how her players were able to stay composed throughout all five sets. "I thought our defense was lacking in some areas, but that's credit to Lutheran High for mixing up their shots. That threw off our whole defense. So, that's something we've got to fix for Saturday."

Norfolk Catholic will play in a district final on Saturday. The opponent, venue and match time was to have been announced sometime on Wednesday.

The use of a zone defense provided the Northeast Community College women’s basketball team an opportunity to win, but the Hawks came up short in a 73-66 overtime loss to North Platte Community College on Tuesday evening at the Cox Activities Center.

Hearing to be held on alleged Snapchat video in murder case

MADISON — The murder case of a Norfolk man is nearing a trial date, but several motions filed by attorneys must be heard by a judge beforehand.

HOWELLS — A basketball game broke out in the second half of a game between a couple of football powers here Thursday night with Howells-Dodge eventually outmuscling Pierce 54-42 in both teams' first game on the hardwood this season.

Finding a podcast that speaks to you

Until recently, I had only listened to a couple episodes of two different podcasts. Both occurred while riding with my daughter on a long-distance drive because they are podcasts that she regularly listens to while driving. I’d often heard people mentioning various podcasts that they enjoyed…

WAYNE — Down six with just under seven minutes left in the game, Wayne State College used a comeback that culminated with a game-winning 3-pointer from Alec Millender to defeat the University of Nebraska at Kearney 67-64 on Monday night.

Long history with restaurant helps with transition for new owners

Vehicle county numbers: The ups and downs of the system

Nebraska will be “celebrating” a little-recognized centennial next year. I use quotation marks because I don’t think there will be a true celebration. But still, in 2022, it will have been 100 years since the numeric system of designating counties on license plates was created.