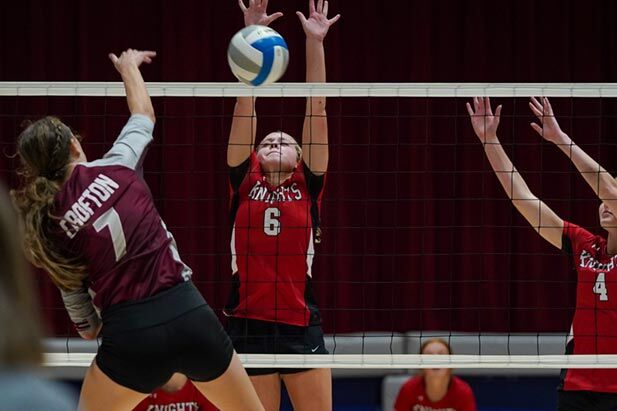 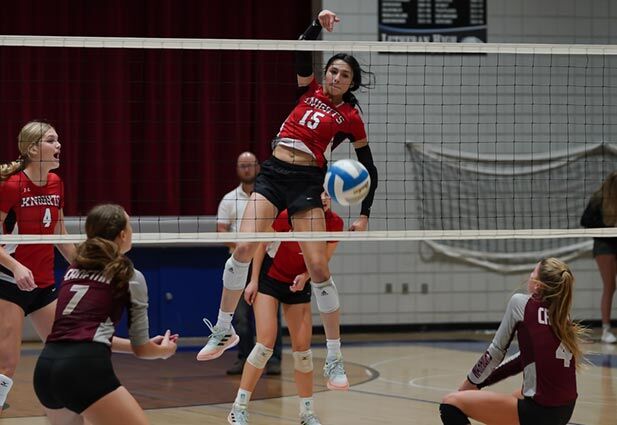 Channatee Robles of Norfolk Catholic hits the ball between Caitlen Guenther and Sammie Allen of Crofton. 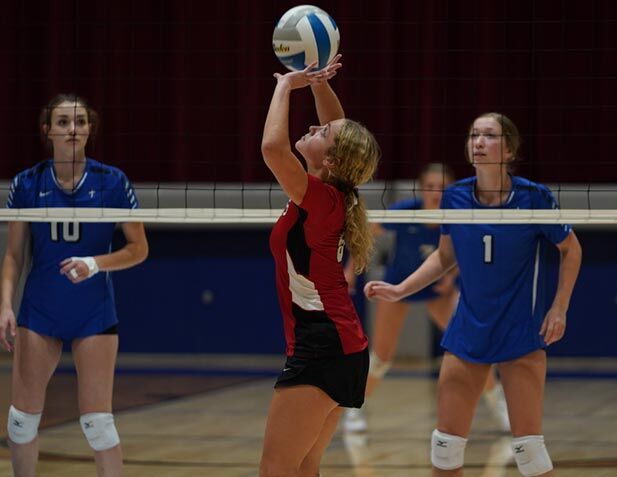 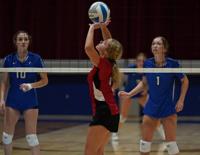 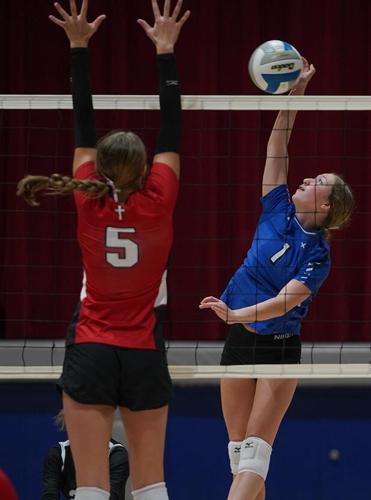 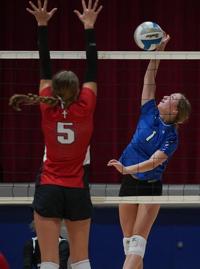 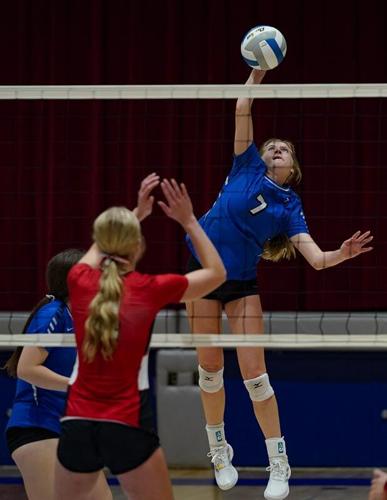 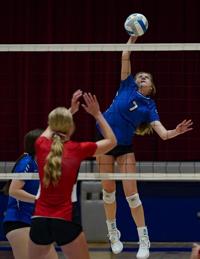 Kendra Petersen of LHNE hits from the back row to Norfolk Catholic. 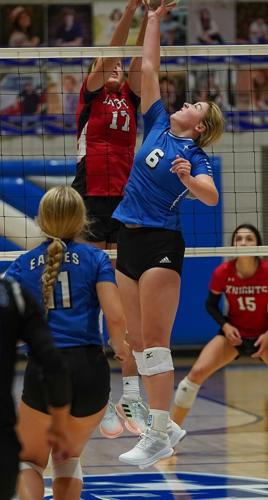 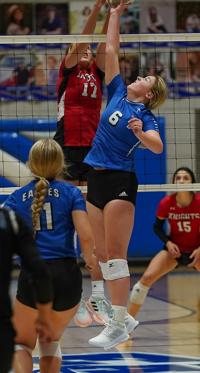 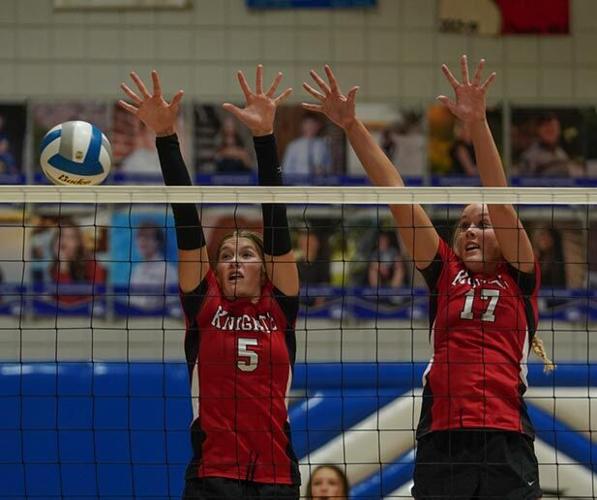 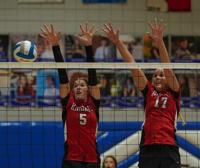 Sidonia Wattier and Morgan Miller from Norfolk Catholic go up for the block. 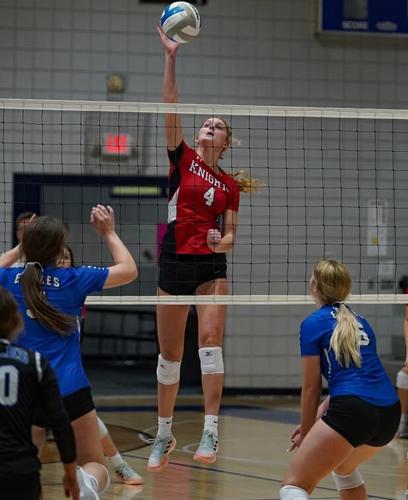 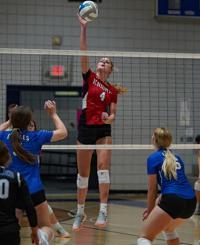 Kenzie Janssen of Norfolk Catholic hits the ball against LHNE. 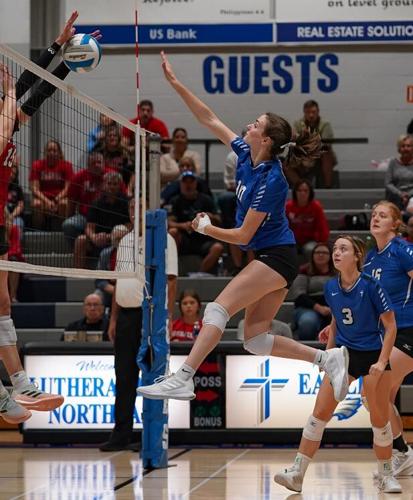 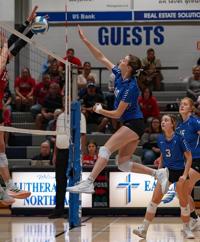 Josie Wolff of LHNE hits the ball into the block of Channatee Robles of Norfolk Catholic. 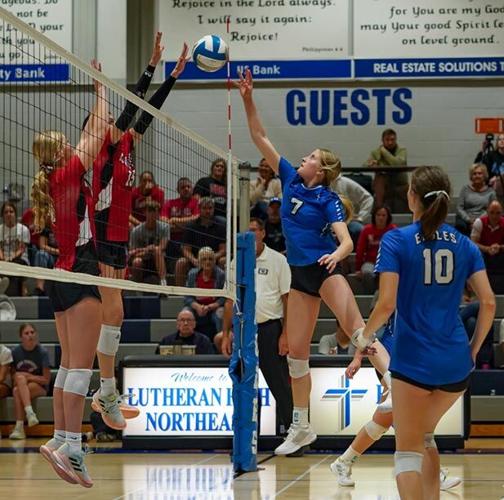 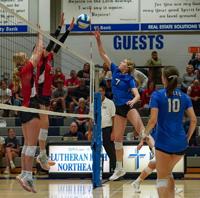 Class D No. 1 Norfolk Catholic needed both its survival and response traits on Tuesday night against Lutheran High Northeast.

Senior Channatee Robles slammed 28 kills as the Class D No. 1 Knights battled past the host Eagles 33-31, 25-27, 25-17 in a thrilling finale of a triangular played at the Clayton and Vivian Andrews Activity Center.

"They push through tough times," Norfolk Catholic coach Michaela Bellar said. "I think this team can be challenged, and I think they like to be challenged."

The Knights, already shorthanded with junior Avery Yosten out for the season, also played without fellow junior Allison Brungardt, who was out due to an illness.

That put the focus on Robles, who added two service aces and a solo block along with her 28 kills. Fellow senior Addison Corr added 11 kills and three service aces, while classmate Morgan Miller had a pair of solo blocks.

Robles hit from virtually every rotation spot, even in the back row. Her hit chart sprayed shots all over the Lutheran High defense, to the point that it was difficult to see the difference between the lines of her shots and the paper that it was charted on.

"How do we defend that?" Lutheran High Northeast volleyball coach Kathy Gebhardt asked. "She's a great player, obviously. But I think our girls stepped up to the challenge. ... She was going to get her good swings, but we were sticking with them."

The Eagles countered with a balanced offense along with a valiant defensive effort. Junior Kendra Petersen led with 14 kills and a solo block, while Avery Koeppe, Josie Spence and Mia Wiederin all had four or five kills each.

Neither team got many scoring runs during the contest. Norfolk Catholic scored a 6-0 run in the first, but Lutheran High countered immediately with four straight to pull within 9-8, and neither team led by more than four points the rest of that set.

The first set eventually featured 10 set points before Kenzie Janssen's solo block finally gave Norfolk Catholic a 33-31 win. In that set alone, Robles had 10 kills, including the tying kill at 31, and Corr added six. Petersen had seven of her 14 kills for the Eagles in the opening set.

"It was a roller coaster," Bellar said.

Neither team had more than a three-point run in the second, which was tied at 23, 24 and 25 before Lutheran High got a Koeppe kill and took advantage of an attack error on set point.

"That was great," Gebhardt said. "The problem is that we want to see that every match. If we see that against Crofton, we probably have a different outcome tonight. That's what we're trying to find, that level of play all the time."

In the third, Norfolk Catholic finally got going offensively. Tied at 4, the Knights scored four straight points, including a Janssen kill and a Robles block, before another four-point run pushed the lead to 15-10 following a Miller block. Corr later got back-to-back ace serves as part of a run that made it 21-13. The match, appropriate as it seemed, ended with a Robles kill off an overpass.

After several successful years of guiding the boys program followed by a departure from coaching to serve a stint as Norfolk High’s athletic director, Ben Ries will be back on the bench this season as coach of the Panthers’ girls program.

It’s that time of year when I need some really good inspiration on what gifts to buy. I am about 10% done with Christmas shopping with 0% ideas on what else should be purchased. It wouldn’t be so hard except for the idea that our kids change. I used to be able to get Nerf guns and Lego sets …

Norfolk High’s David Nelson, in his 21st year of guiding the Panthers’ swimming and diving program, said the goal of both the girls and boys teams is to maintain, or even improve on, the success of recent years.

He’s the only Norfolk High School student apprentice, but he’s doing quite a good job at it so far.

Among the accomplishments of the Norfolk High wrestling team a year ago are a first-ever Heartland Athletic Conference championship, a district runner-up finish and a fourth-place finish at the state duals tournament.

MADISON — A Knox County man was ordered on Monday to spend at least the next seven months incarcerated for a felony theft conviction.

Social media platforms should not be censored

With Elon Musk’s recent purchase of the social media platform Twitter, changes are in store. Since I am not an avid Twitter user, this new ownership won’t really have an effect on me. However, the changes he plans to make are intriguing.

The end of a calendar year is always a good time to pause and reflect about what you’ve accomplished and learned over the past 12 months. As I look back upon 2022, here are four lessons I learned that pertain to my literary life.

In its first season of competition, the Norfolk High girls wrestling team returned home from the Nebraska School Activities Association’s state tournament in Omaha with a Class A state runner-up trophy along with four individual medalists.

Do you think the Department of Homeland Security is carrying out its mission of securing the U.S. borders?