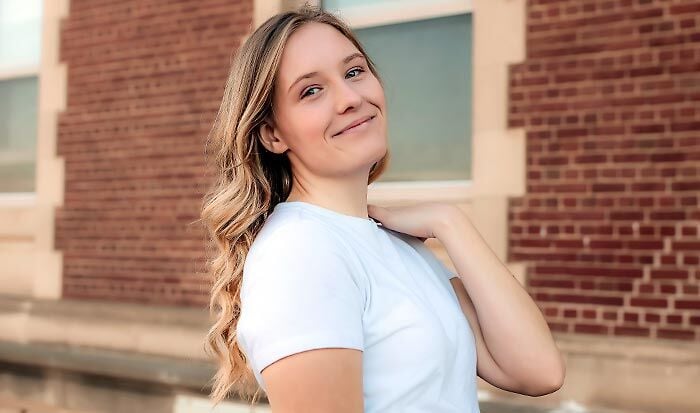 SAVANNAH KOEPKE, a Norfolk Catholic High School senior, is graduating on Sunday, May 9. She will be heading to the University of Nebraska at Omaha in the fall to pursue degrees in education. Koepke’s experience in the foster care system, along with inspiration from her great-grandmother, has inspired her to become a teacher. 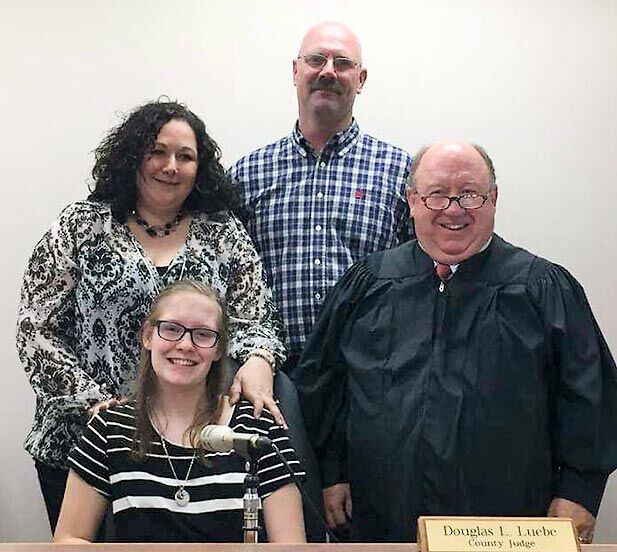 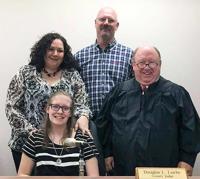 SAVANNAH KOEPKE (front left) is shown on her adoption day, May 3, 2018, with her parents, Jennifer Koepke (back left) and Dennis Koepke, and the county judge. Savannah was placed with the Koepke family as a foster child in 2015. Her parents have fostered nearly a dozen children since then.

SAVANNAH KOEPKE, a Norfolk Catholic High School senior, is graduating on Sunday, May 9. She will be heading to the University of Nebraska at Omaha in the fall to pursue degrees in education. Koepke’s experience in the foster care system, along with inspiration from her great-grandmother, has inspired her to become a teacher.

SAVANNAH KOEPKE (front left) is shown on her adoption day, May 3, 2018, with her parents, Jennifer Koepke (back left) and Dennis Koepke, and the county judge. Savannah was placed with the Koepke family as a foster child in 2015. Her parents have fostered nearly a dozen children since then.

The annual dinner always marks an important memory for the Koepke family. In September 2015, Savannah, then in middle school, met her parents for the first time.

“I did not want to get in the car with my mom, so we sat in this office for three hours as she tried to get me to go home with her,” Koepke said. “Then she said, ‘Well, I have other kids to go home and feed. Let’s go make meatloaf, do you like meatloaf?’ Once I got in the car, she found out it’s a food that I like, and the first thing I had with them was meatloaf.”

Koepke’s parents, Jennifer and Dennis, previously had nine children of their own when they fostered Koepke from 2015 until her adoption on May 3, 2018. She was their first foster and adopted child.

Since she was placed in their home, Koepke’s parents have fostered nearly a dozen children, some of whom attended Norfolk Catholic High School with Koepke. Her parents adopted two children following her and are now fostering one, she said.

Koepke has used her experiences over the years to help mentor her foster siblings through school and living with a completely new family. Now she is planning to become either a middle school or special education teacher after graduation.

The Norfolk Catholic senior will be attending the University of Nebraska at Omaha in the fall to double major in secondary education and special education, with concentrations in math and middle level education.

Koepke said the biggest influence on her decision to become a teacher is her great-grandmother, Loretta Wohlman, who was a second grade teacher.

“My great-grandma really strived for me to be still in the family when I was placed (in foster care) when I was little,” she said. “I’ve looked up to her my entire life, so I want to be a teacher because of her.”

Koepke was put into foster care when she was 1½ years old. She was adopted by her cousin at 3 years old but was taken away in sixth grade after she experienced multiple years of abuse. She was again placed in foster care — first with her grandparents, then a Norfolk foster home and finally with her adoptive family.

“I always said that they have always been my forever home — they were who I was meant to be with, but it took 13 years to find them,” she said.

Koepke spent seventh and eighth grade in Norfolk Public Schools but transferred to Norfolk Catholic in high school. There she’s been heavily involved in sports and the arts. She played volleyball until her junior year, competed in cheerleading the past two years and participated in band, the school musical, one-act and speech all four years.

Koopman said Koepke also always goes out of the way to help other students, including her own foster siblings. Koopman said she often sees her accompanying them in the hallways or sharing clothes that fit dress code.

One of the things Koepke is passionate about is being a mentor to her foster siblings. Koepke said she knows how it feels to be suddenly thrust into an unfamiliar family environment.

Koepke said she knows firsthand that those in the foster care system are always going through something difficult. Making foster children in her home feel comfortable is crucial.

“I’ve obviously gone through the same thing as them and can relate because I was in the system. I know the difficulties of it and the struggles you go through,” Koepke said. “I’ve always tried to be a positive influence and say, ‘Hey, it's going to get better. It just takes time. It will all be fine.’ I just try to be a positive role model.”

Being involved in the foster care system is something that also influenced Koepke’s career path.

One of the first people Koepke confided in about the abuse she went through at a previous placement was her school principal.

Her principal was there for her when others weren’t, and Koepke said she wants to be the same role model to her future students. And she’s already started with her impact with the students around her at Norfolk Catholic.

“I always devoted myself after everything happened to at least try to make an impact on people’s lives, even if it’s just a small one,” she said. “I don’t want my past to define me. My goal (has been) not letting my past drag me down, and that’s why I’ve done all of my activities, too, because I want to show people — yeah, I came from this rough past, but I can be successful because of it.”