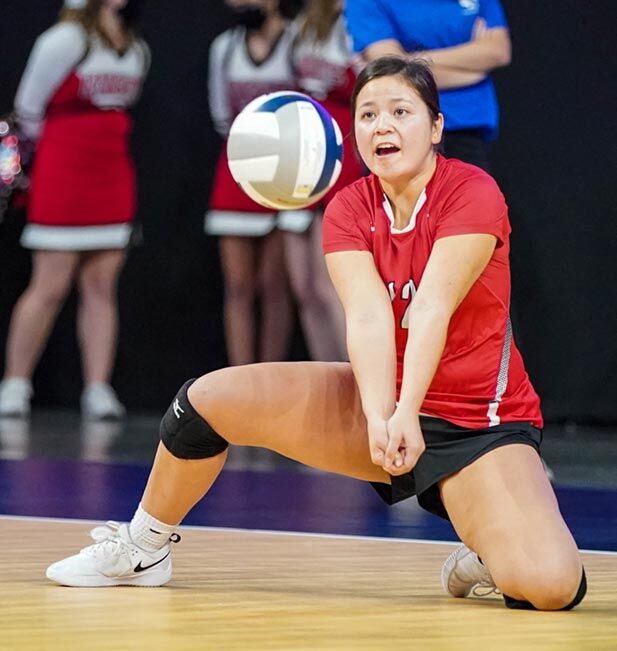 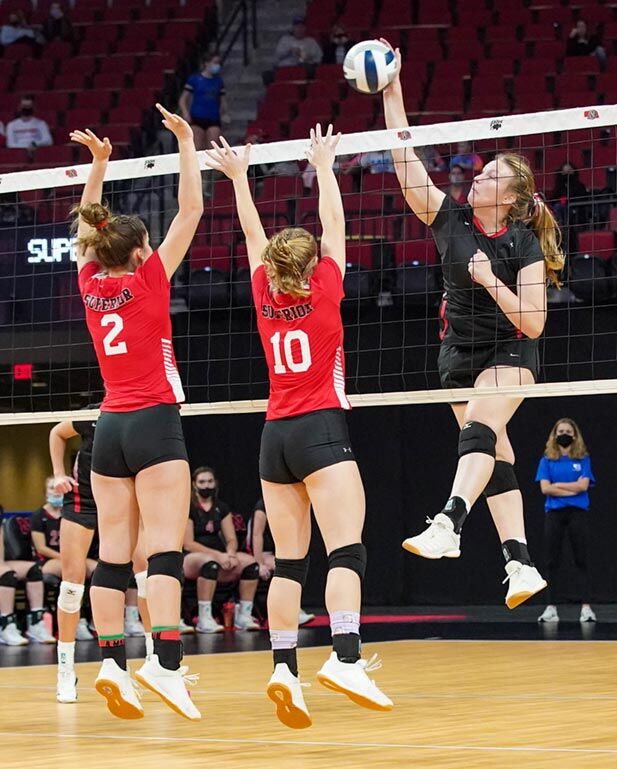 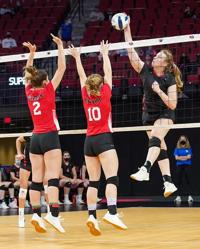 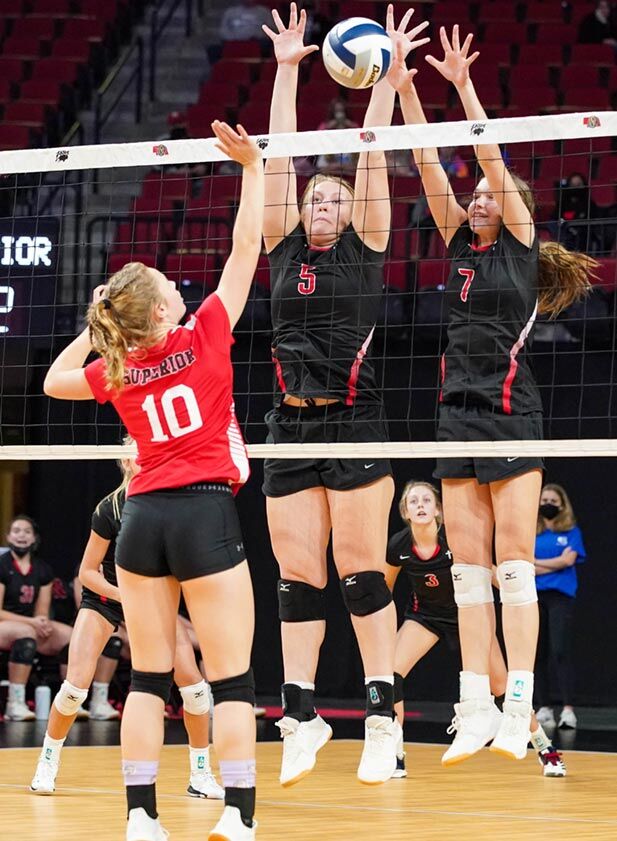 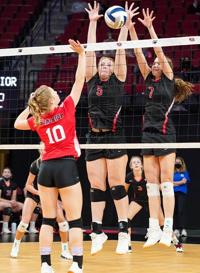 Carly Marshall sets the ball up against Superior Thursday 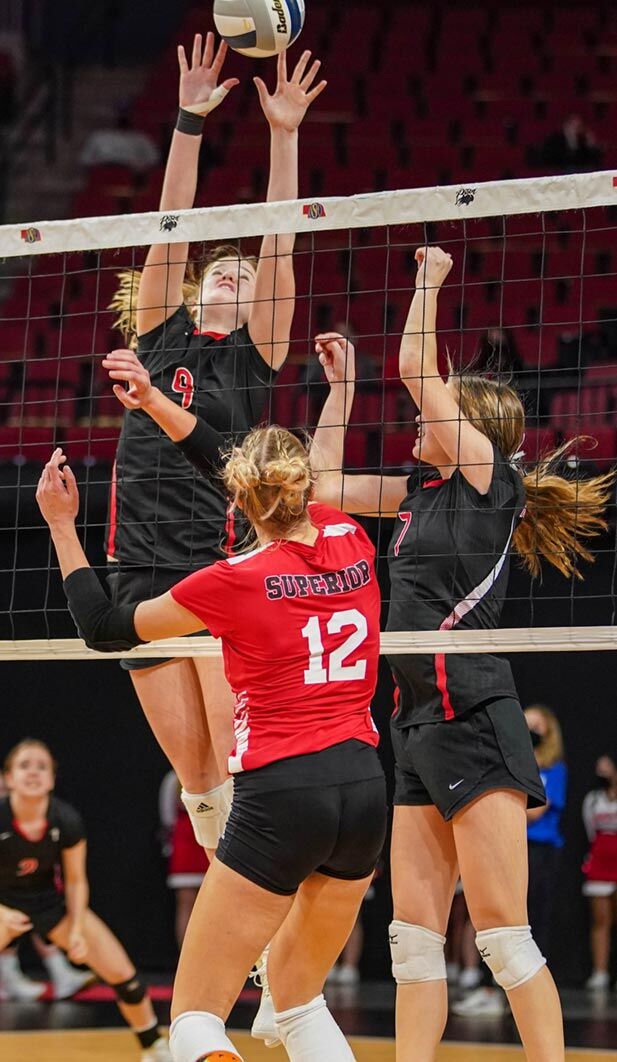 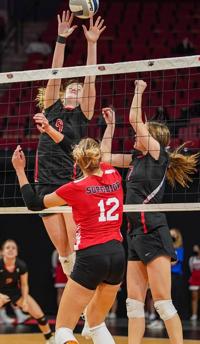 Avery Yosten and Addi Corr go up for the block 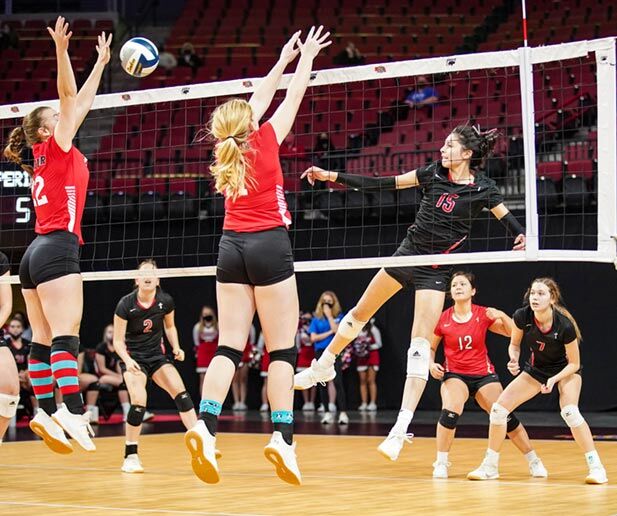 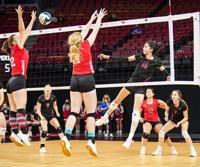 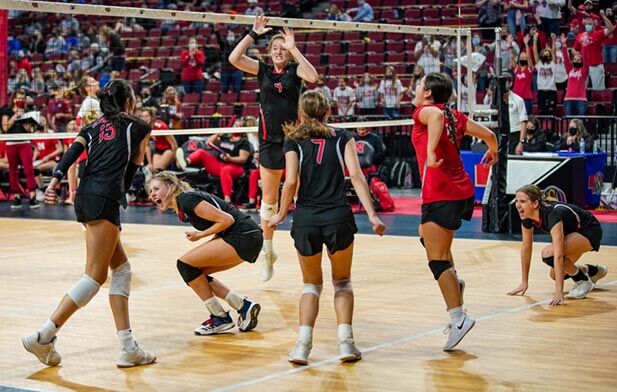 Carly Marshall sets the ball up against Superior Thursday

Avery Yosten and Addi Corr go up for the block

LINCOLN — Third-seeded Norfolk Catholic advanced to the semifinals of the Class C2 bracket in the state volleyball tournament at Pinnacle Bank Arena on Thursday with a sweep of No. 6 Superior, 25-22, 25-18, 25-13.

"You could tell that first set, the nerves kind of got us a little," Norfolk Catholic coach Michaela Bellar said. "I thought we started off strong, and they battled back a little bit. They're a good team, but I was proud of our girls for settling in and playing our game."

The Knights jumped out to a 6-1 advantage in set one with Mary Fennessy and Channatee Robles leading the way offensively.

Superior eventually tied it at 18 and took a 19-18 lead on back-to-back Norfolk Catholic errors.

The Knights regained the lead at 20-19 on an Addison Corr kill, the Wildcats forced another tie with a Shayla Meyer kill and then Norfolk Catholic outscored the girls from Nuckolls County 5-2 the rest of the way. Robles' kill off a Carly Marshall set provided the winning tally.

"I thought we did a great job of serving aggressive throughout the whole match," Bellar said.

"Second set, we kind of struggled passing at the beginning," Bellar said. "Our goal was to take advantage when Meyer was in the back row, because she's a very dominant player up front, and try to get them out of system as much as we could."

Meyer, a junior, is the younger sister of Nebraska freshman volleyball player Kalynn Meyer, who led the Wildcats to back-to-back fourth-place finishes in Class C2 in both 2018 and 2019.

"Our goal was to get touches on her as much as we could, and we got some touches, but she's a good player," Bellar said. "She can hit it at the 10-foot line. I told our girls, 'If you don't get a touch on it, get ready because she can break your nose.' "

Meyer finished with a match-high 18 kills.

Superior managed to tie the score at both 14 and 15 but was never able to grab the lead. The Knights used a block and service ace from Corr and back-to-back blocks by Fennessy and Robles in a 6-1 run to end the second set at 25-18.

Set three was all Norfolk Catholic. The Knights jumped out to a 7-1 lead and the Wildcats never cut the margin to less than five the rest of the way. A Robles smash ended the match at 25-13.

"It was a great all-around team effort," Fennessy said. "Everybody really worked hard and really wanted to get the job done tonight."

Normally, the early-round matches for the smaller schools are played in high school gyms, but with the COVID-19 situation, the NSAA chose to play all of the contests at Pinnacle Bank Arena.

"I think our girls enjoyed this environment a little more because at a high school, it was so loud and there was not very much room to sit," Bellar said. "So, here, I was able to talk to the girls a little more, which was good and kind of helped them settle in a little bit."

The win was Norfolk Catholic's first at state since 2006. The Knights will face second-seeded Overton in Friday's semifinals. The Eagles were straight-sets winners over Guardian Angels Central Catholic earlier in the night.

"They've got some strong hitters up front. They're tall. They block well, so we're going to have to hit around their block and try to block their hitters as well," Bellar said. "They've got a couple of good middles and play solid defense, so it's going to be a pretty even-matched game.”

The Norfolk Catholic-Overton match is set to begin right after the other C2 semifinal between Lutheran High Northeast and Clarkson/Leigh. That starts at 2 p.m.

Of course, while Bellar and Lutheran High coach Kathy Gebhardt are focused on their semifinal foes, if both Norfolk schools win on Friday, the all-Norfolk championship match would begin at 2 p.m. on Saturday.

The Des Moines Area Community College softball team, ranked No. 5 in the National Junior College Athletic Association, was a tough out for the Hawks.

WISNER — A drive-through window, an expanded array of gift items and customer consultation rooms are just a few of the advantages Wisner Apothecary has found in its recent relocation.

According to the people who loved her, Rosalind Lamson was many things. The Norfolk native, known affectionately as "Roz," died Aug. 13, 2020, after a short bout with pancreatic cancer, but she left behind a legacy treasured in Norfolk, Stanton and beyond over her 70 years of life.