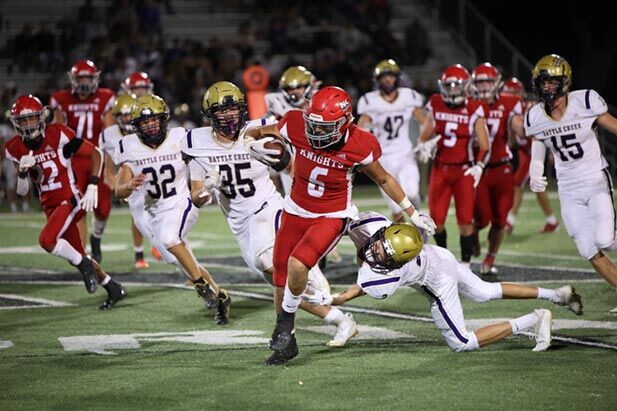 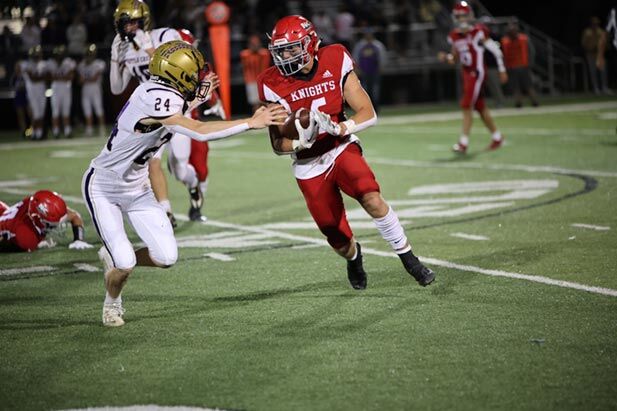 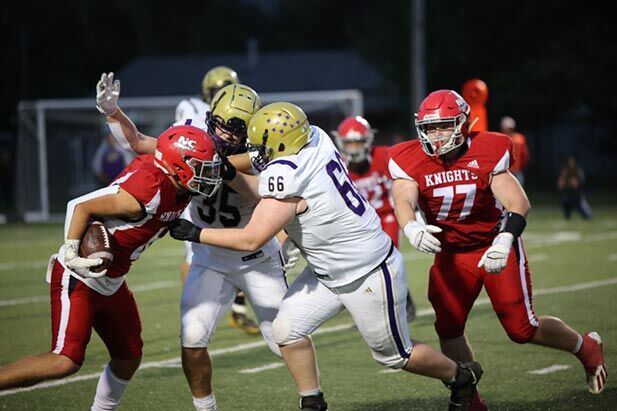 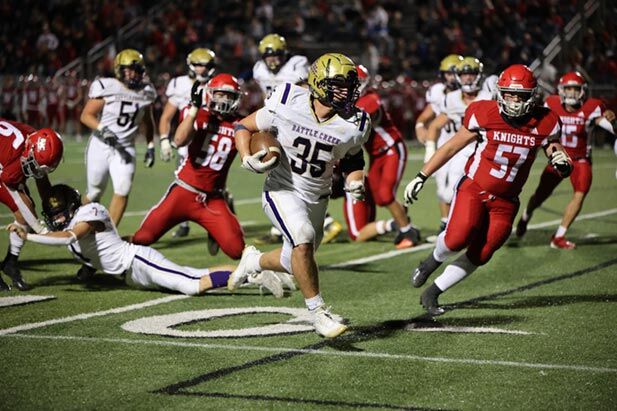 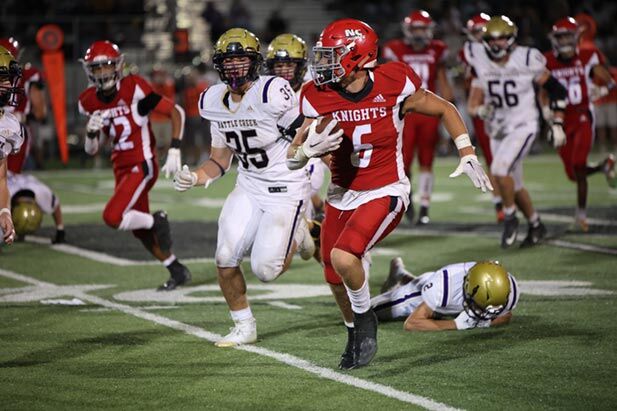 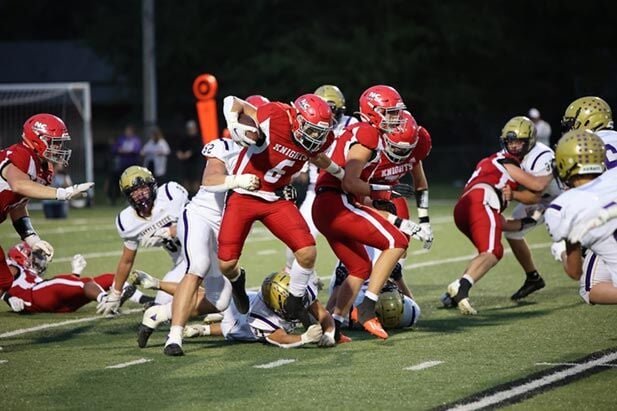 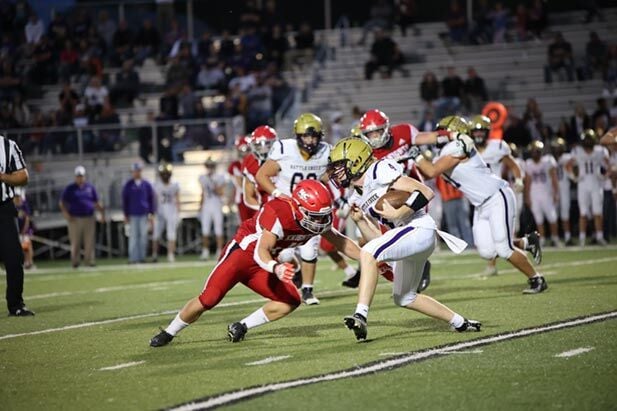 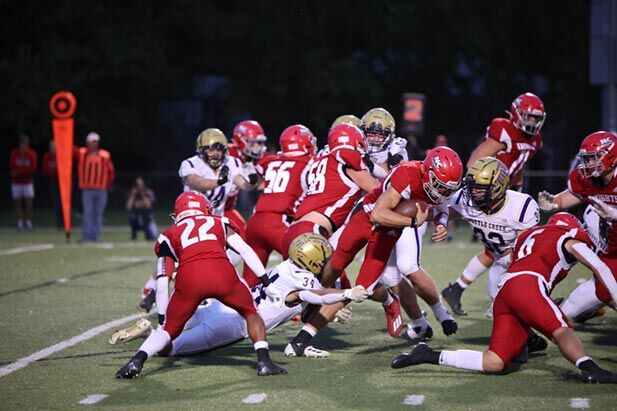 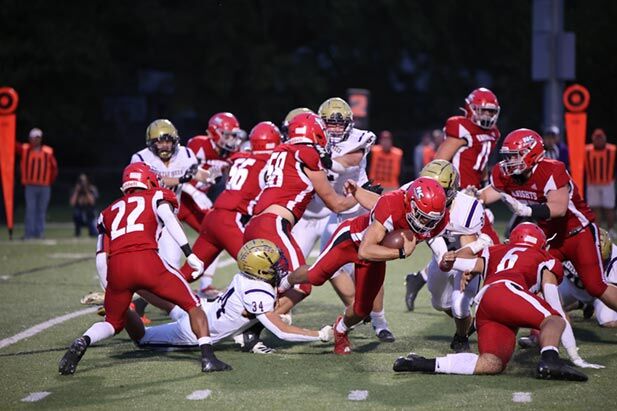 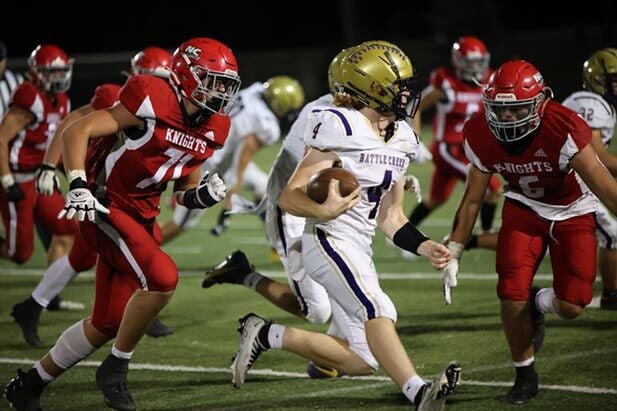 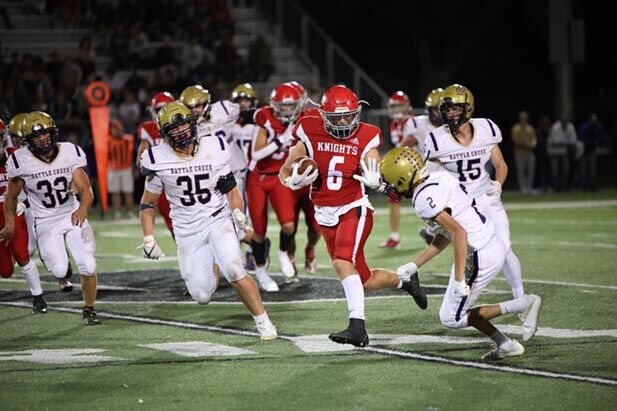 In what started off as a slugfest between two historic rivals, explosive plays made the difference as the Class C No. 2 Norfolk Catholic Knights beat the No. 3 Battle Creek Braves 28-7 on Thursday night at Veterans Memorial Field.

Following an interception by Boden Obst on Norfolk Catholic’s first drive of the third quarter, Battle Creek got down to the Knights’ 36-yard line with a chance to tie the game.

The next two plays were an incompletion by Jaxon Mettler and a run for no gain by Trent Uhlir. The play that followed was an interception thrown by Mettler to Max Hammond, who took it 64 yards for a touchdown.

Battle Creek got on the board on its ensuing drive, when Uhlir capped off a seven-play, 65-yard drive with a touchdown run to make it 14-7.

Karter Kerkman responded in kind, scoring on a 37-yard touchdown run to put the red and white back up by two possessions with 44 seconds left in the third.

Following a Braves three-and-out, the Knights found themselves with third-and-2 at their own 46 midway through the fourth.

Kerkman got the call again. He took the handoff left, made a defender miss and outran another en route to a 54-yard touchdown.

All told, the senior running back had 173 yards on 17 carries to go with his two scores.

The 7-0 halftime score was the closest for Norfolk Catholic this season since its week one game at Oakland-Craig. The team led that one 13-6 at the break before winning 37-12.

For Kerkman and the Knights, being able to stay strong and pull through came from tapping into what they knew they were capable of, even against a tough opponent.

“We just knew that coming into this game, it was going to be a good one all game,” Kerkman said. “We weren't really happy with how we performed in the first half, but we knew that we could come out and perform a little better in the second half and that’s what we did.”

Norfolk Catholic had five total plays that went for more than 20 yards, including all four of its touchdowns. Battle Creek had four, three on offense and the interception by Obst that was returned 20 yards.

Coach Andrew Carlson said he felt his Braves had chances to stop or limit those plays but couldn’t convert.

“We just said we couldn’t give up those yards after contact,” he said. “If you look at most of those plays, we had hands on them, we just didn’t get them down and it got back to us.”

After more than 12 minutes of scoreless football, the first big one came on the third play of the second quarter. Quarterback Carter Janssen dipped a screen pass off to Kerkman, who evaded defenders and broke free for a 63-yard touchdown to make it 7-0.

Janssen completed five of his nine passes for 104 yards, a touchdown and an interception. He also had 13 carries for 90 yards.

After exchanging three and outs to follow, Battle Creek managed to get down to the Norfolk Catholic 36 with 11 seconds left in the first half. Mettler threw an incomplete pass, then got sacked by Ethan Reardon to end it.

Thursday night was another chapter in a strong rivalry between the teams. They have 14 state championships between them and have faced off in the state playoffs seven times. Heading into Thursday, the Knights and Braves were ranked No. 1 and No. 3 in Class C2, respectively, by the Omaha World-Herald.

It was great for Bellar to be able to add on to the story once again.

“I can think back to 1985 when Bob Schnitzler was standing over there and I was a little intimidated at that time playing against him,” he said. “We’ve had many, many good football games. We haven’t always played, but anytime we play, the kids are friends, but for 48 minutes, they get after each other.”

Carlson said he felt the Fightin’ River came out and competed hard while showing improvement, but there’s still a lot of work to do in a short period of time.

“Earlier in the year, we had a lot of self-inflicted wounds and it really killed us with turnovers and untimely penalties and I think we’re getting better at that,” he said. “Defensively, at times we looked pretty good and then there’s times when their athletes made plays and we didn’t.

“We’ve just got to keep working. It’s not going to get any easier.”

PIERCE — A man who dealt nearly 28 grams of methamphetamine to a confidential informant in the parking lot of a Pierce business last year will spend at least the next 16 months incarcerated.

Social media platforms should not be censored

With Elon Musk’s recent purchase of the social media platform Twitter, changes are in store. Since I am not an avid Twitter user, this new ownership won’t really have an effect on me. However, the changes he plans to make are intriguing.

Among the accomplishments of the Norfolk High wrestling team a year ago are a first-ever Heartland Athletic Conference championship, a district runner-up finish and a fourth-place finish at the state duals tournament.

Norfolk High’s new boys basketball coach, Ben Bohn, grew up around coaches — on and off the field.

Elon Musk's purchase of Twitter is as hilarious as it is concerning. Despite Musk’s mission of establishing more free speech on Twitter, his decisions have done the exact opposite and created a mess, so chaotic, so … hilarious that I can’t take my eyes off the disastrous platform.

Some board members unhappy with article about nitrates and drinking water

At least five Lower Elkhorn Natural Resources District directors aren’t happy with how an independent news organization is portraying the LENRD’s efforts to prevent nitrates from leaching into the groundwater in Nebraska.

MADISON — A Knox County man was ordered on Monday to spend at least the next seven months incarcerated for a felony theft conviction.

Norfolk High’s David Nelson, in his 21st year of guiding the Panthers’ swimming and diving program, said the goal of both the girls and boys teams is to maintain, or even improve on, the success of recent years.

Do you think the Department of Homeland Security is carrying out its mission of securing the U.S. borders?