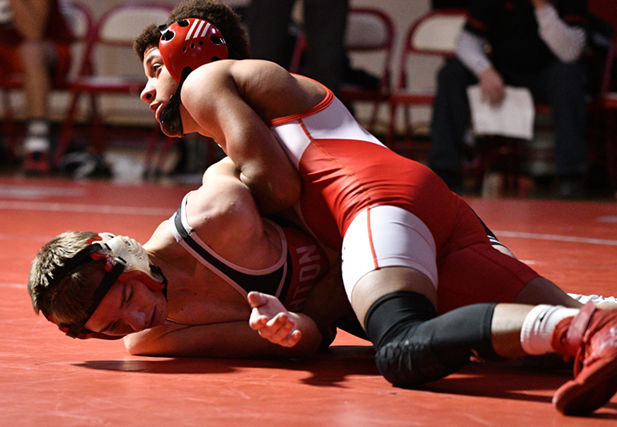 Jake Wragge/Correspondent Norfolk-- Kanyon Talton of Norfolk Catholic works to roll Shane Farnik of Creighton on his back during the 132 pound match at Thursday night's dual in Norfolk. 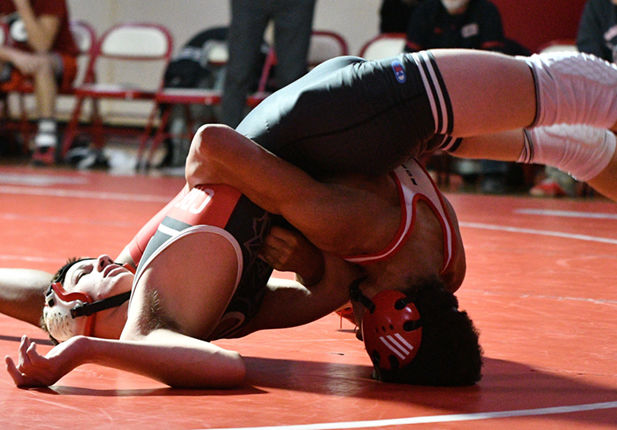 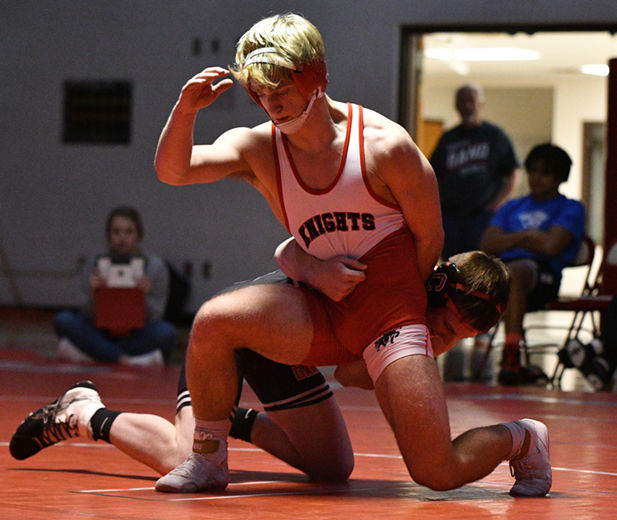 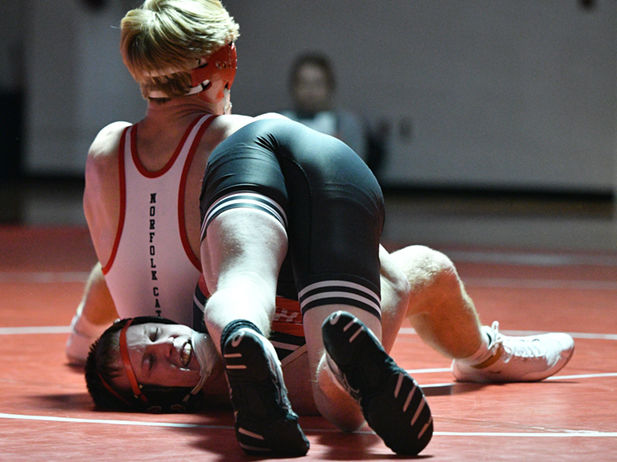 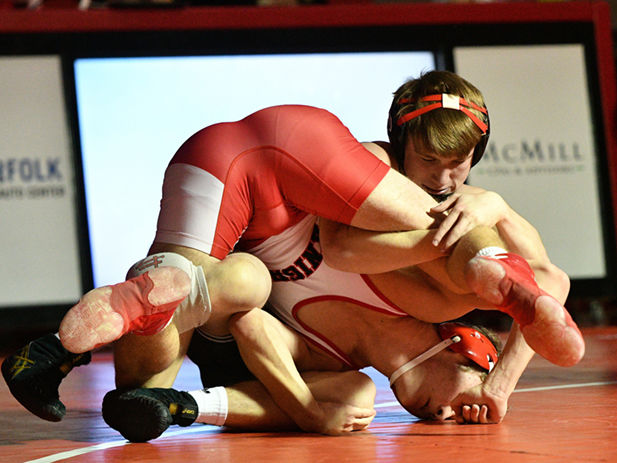 Jake Wragge/Correspondent Norfolk-- Cody Hanvey of Creighton works to put Noah Wattier of Norfolk Catholic on his back during the 152 pound match at Thursday night's dual in Norfolk. 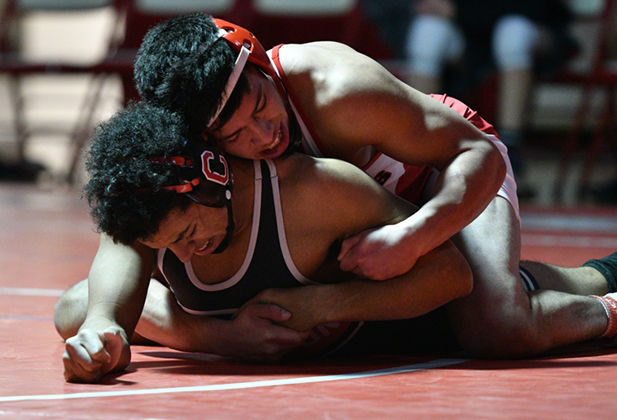 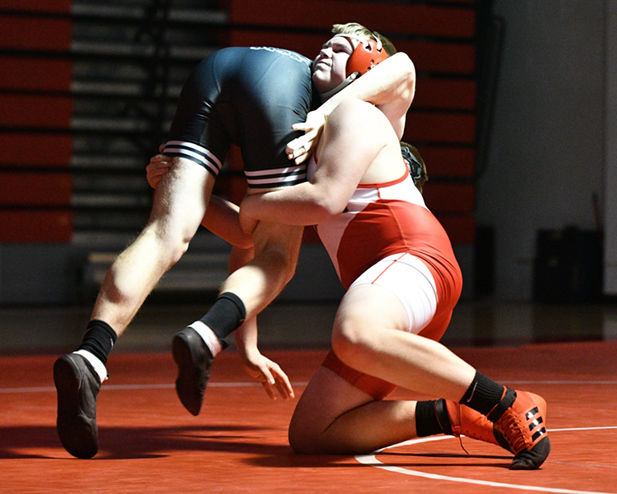 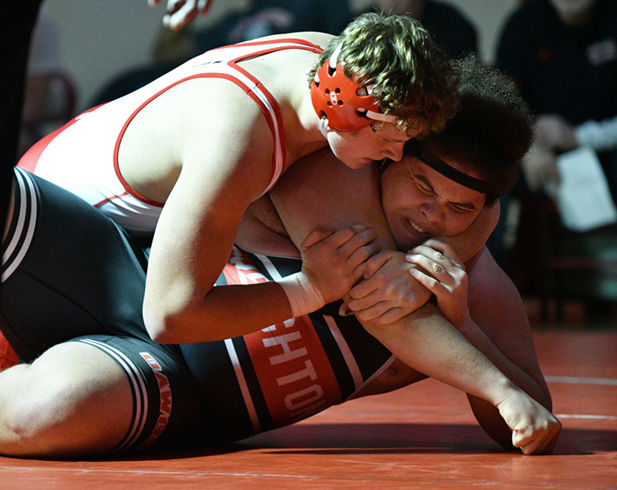 Jake Wragge/Correspondent Norfolk-- Kanyon Talton of Norfolk Catholic works to roll Shane Farnik of Creighton on his back during the 132 pound match at Thursday night's dual in Norfolk.

Jake Wragge/Correspondent Norfolk-- Cody Hanvey of Creighton works to put Noah Wattier of Norfolk Catholic on his back during the 152 pound match at Thursday night's dual in Norfolk.

Norfolk Catholic’s 36-30 dual win over Creighton was a byproduct of the “unexpected.”

“We won as many matches as we thought we would; they weren’t necessarily the ones we thought we’d win,” Knights coach Henry Aschoff said. “So you never know. Just because of the way it looks on paper, it doesn’t mean anything until you get on the mat.”

Two matches in particular had unexpected results. The first was a loss by Norfolk Catholic’s Francisco Mendez, who lost by pin to the Bulldogs’ Sam Vortherms in the 160-pound match in the second period.

“Fran was doing his kind of stuff, got a cradle in but got a little sloppy, and when he lost that cradle, he didn’t bail. He needed to feel that cradle was slipping and get out of there,” Aschoff said. “That gave the other kid a chance to put in a cradle, and it was tight, so there wasn’t anything Fran could do about it.”

The second unexpected result was a win by Knights freshman Caden Arens, a winner by a first-period pin over Creighton’s Anthony Morrill at 195 pounds.

“I was not expecting Caden to come through like that; that was nice,” Aschoff said. “Caden gave up a takedown, but he kept moving and got in a position exactly like we worked on just yesterday in practice. Once he got the guy broke down, he buried a ‘half’ in there and got the pin.”

“He’s wrestled the last two years in our junior high program,” he said. “For a 195-pound freshman, that’s a tough weight class for a young guy like that. He’ll get better; the stronger he gets, the better he’ll do.”

Another freshman, Kanyon Talton, moved up from 126 to wrestle Shane Farnik at 132 pounds, established an 8-2 lead, then won by pin in the second period in the first match of the night.

Norfolk Catholic’s other winning wrestler was sophomore 220-pounder Isaac Wilcox, who moved up a weight class and earned a first-period pin over the Bulldogs’ Christopher Cauthon at 285 pounds.

Noah Wattier (152 pounds) lost by pin to Creighton’s Cody Hanvey in the second period, and Ben Morland (170) lost by pin in the first period to the Bulldogs’ Easton Pavlik, while Clayton Christensen (106 pounds) and Allan Olander (138) were unopposed winners for Norfolk Catholic. Creighton received points when the Knights were open at 182 pounds. Both teams were open in the 113- and 120-pound classes.

Senior Wyatt Smydra — the Knights’ only senior — also won, improving his record this season to 21-2. With the win, his 142nd, he becomes Norfolk Catholic's all-time wins leader--passing Zach Adams' total of 141.

With this, his 14th pin of the season, Smydra has 86 pins for his career, which continues to improve his position atop the Knights' record book in that category--a record he surpassed in December.

“Wyatt wrestled a real controlled match. It wasn’t what he was going for, but he ended up pinning the kid with a double-chicken wing,” Aschoff said.

“He had a big week last week at the David City Aquinas tournament, beating the kid from Pierce who’s been ranked No. 8 in Class B in the semifinals 7-1, then beat the fourth-place finisher at 145 pounds at state last year in Class C in the finals 6-2,” he said. “So he knocked off the kid ranked No. 2 in his weight class, and this week at Cross County in Stromsburg, he gets to face the No. 4-ranked Class B wrestler in his weight class.”

“Tonight I just worked my stuff; the kid was pretty solid on his feet and was pretty defensive, but I finally got into a few shots and just rode him out,” Smydra said. “Eventually, in the second period I got the arm bars in, got the chicken wing in and pinned him.”

“It was a good team win; we wrestled well and finished our pinning combinations and got it done on the mat,” he said. “Francisco will just have to fight back and use tonight as motivation; Caden’s win was unexpected, but if he didn’t get that pin, it probably would have changed the outcome of the dual.”

Smydra described his senior season as passing by quickly, with a few bumps in the road, but he is looking forward to a chance to face a wrestler this weekend that he lost to earlier in the season.

“I don’t keep track of my record, though; I’ve got to stay focused,” he said.

His role as a senior is about helping his younger teammates learn the sport and understand how to prepare in the practice room.

“There’s a lot of potential (on this team); it’s fun teaching the freshmen and the new kids, showing them the ropes,” Smydra said.

Despite all of his success on the wrestling mat, Smydra doesn’t plan on wrestling in college — although he isn’t “closing any doors.”

“I want to go to a school that has engineering, so that limits the possibilities,” he said. “It’s a big commitment (to wrestle and be a student), and if I want to have the academic success that I want, then I can’t do both.”

With the win, the Knights’ dual record improves to 4-5 on the season with three dual meets remaining.

“I was excited about the way the guys competed when they got out on the mat, and because of that, we were able to put ourselves in position to win,” Aschoff said. “After Fran lost that match, I wasn’t sure how it was going to turn out, but Caden came back and picked up his teammate, and that was a great job.”