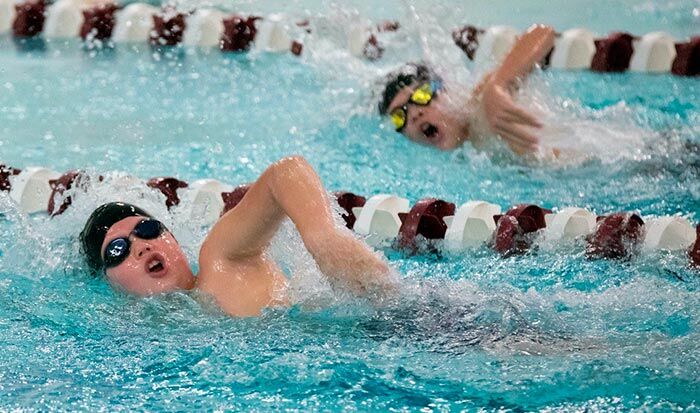 Tate Johnson (bottom) and Brody Phillips of the Norfolk Aquajets swim during a recent intrasquad meet at the Norfolk Family YMCA. 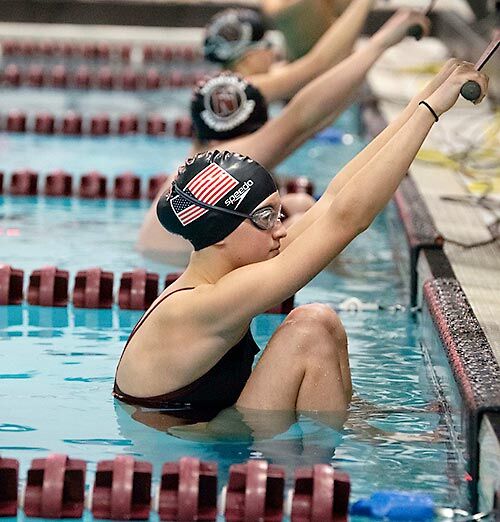 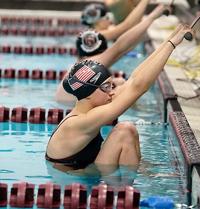 Dacy Cleveland of the Norfolk Aquajets prepares for the start of a race during a recent intrasquad meet at the Norfolk Family YMCA.

The Norfolk Aquajets are like almost every other sport club fighting through a pandemic, but the group is working hard to give its kids the best experience possible.

As a parent-run competitive swim team that practices at the Norfolk Family YMCA, the club is also a part of Midwestern Swimming, which is included in USA Swimming. The Aquajets compete against teams from South Dakota and Iowa, as well as several others from Nebraska.

David Nelson coaches both the Norfolk Aquajets and Norfolk High's swim team. Nelson's youngest son is a member of the club as well. Nelson has been helping with the club for the past 18 years, but during the winter season, he takes a step back and focuses on the high schoolers. The coaches and board are trying to use the organization to keep the competitive swim level high in the area, Nelson said.

"I think it's a great opportunity for kids if they want to swim at the next level,” Nelson said. “Whether that be at high school, which Norfolk High provides because it's kind of a feeder program. It's its own entity.

“It's not affiliated with the YMCA, but it's the only high school program in the area or if they want to swim in college because there are a lot of Aquajets that have gone to the college level, and there have been some that have even swam at the Olympic trials."

The club has been a fabric of the Norfolk community since the 1960s. With a family atmosphere, former Aquajets have started coming back to help run the club.

One of the former Aquajets, Nick Cleveland, was a member for 10 years and is now president of the club. For him, it’s also a family affair, with two children as members and his wife helping as a coach. Cleveland said the Aquajets provide an experience that's hard to find anywhere else.

"I think there's a lot of advantage to any individual athlete sport. With the Aquajets, there's no varsity. There's no JV. Everybody practices. Everybody swims. With the exception of those championship meets at the end of the season, everybody is invited. The team building and the family atmosphere that we have and let's not forget the work ethic it instills in these kids. If you go out there and look, they are working."

Nelson also sees the advantages of the Aquajets from a different perspective as coach of Norfolk High’s team.

The YMCA season takes place during the winter, but USA Swimming continues year round. Kids ages 6 and up can join the Aquajets, and college students come back and swim for the club, too.

When Nelson arrived in 2002, the club's numbers were low. The board and coaches have increased the number of members since then to almost 70, which is seen as a great sign for the community.

At the beginning of the summer, Cleveland and the rest of the board met to prepare for the season, and they were unsure how the summer was going to look. The club spent almost the whole summer practicing except for two semi-organized meets: one at the Cornhusker State Games and one in Fremont.

The club went into the fall/winter season with no meets scheduled except for one in Sioux City. However, it was able to travel in October and hosted two of its own meets. Being near Iowa and following the YMCA and Nebraska Gov. Pete Ricketts’ protocols, the Aquajets have been an outlier compared to other clubs looking for opportunities to compete and practice. The club usually has 40 to 48 kids practice, which is near the capacity of 50, and Nelson counts them as fortunate.

Even though they were able to find competition in the fall, they had no meets scheduled for December, and that's when Cleveland and the rest of the board members came up with the idea to have an intrasquad meet.

Nelson was at the meet for only the last 10 minutes, but he was happy with what he saw.

"It was really cool to see the excitement with the kids, and it was more of a personable family atmosphere that I saw,” Nelson said. “We had parents racing their kids, which that's the thing about the Aquajets.

“It's that environment that keeps kids addicted to it, and competitive swimming is tough, but it's kind of a family bond, which I think is unique.

At the end of the winter season is the Midwestern Championships. Cleveland said the reason for the intrasquad meet was to try to get kids there with qualifying times.

"We have enough parent volunteers that are officials, so we can run a sanctioned USA swimming meet and those times count toward their goals at the end of the season,” he said.

Cleveland said the board is prepared to have another one or two intrasquad meets if needed. According to Nelson, the situation can change day-by-day.

"Kids wear masks going up to practice, and they have them on going up to the water. We're doing all of the things to prevent the spread of COVID, but we're also still trying to give out kids opportunities to be able to race and compete. It's been a change, but it's been like everybody else with sports, and we're hopeful we can provide more opportunities for our kids."