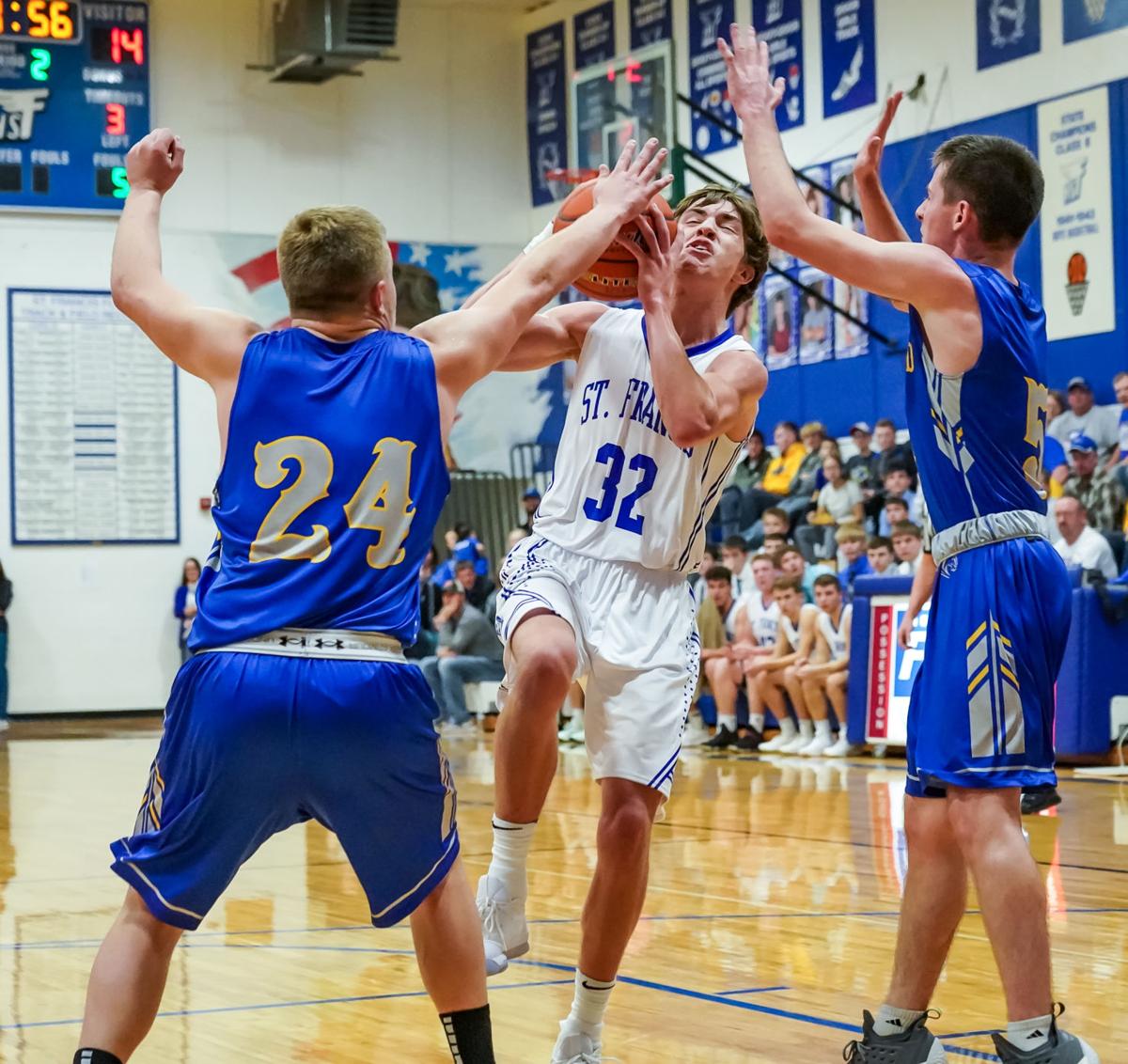 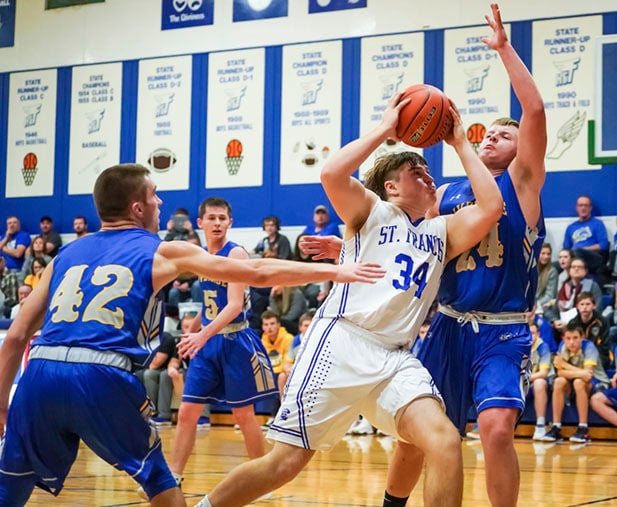 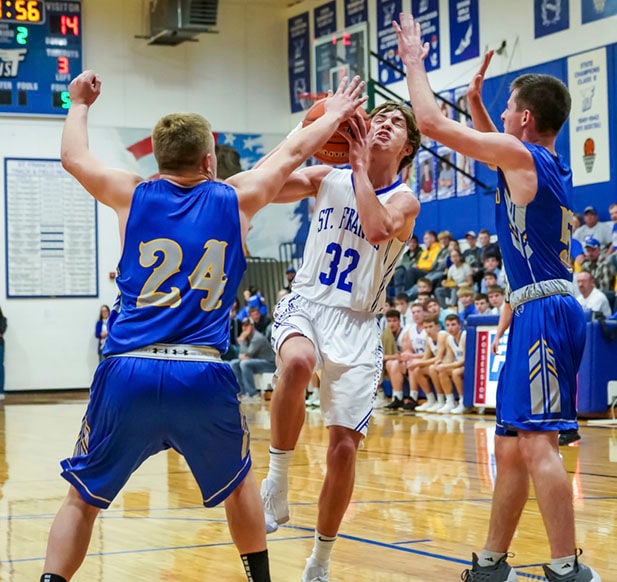 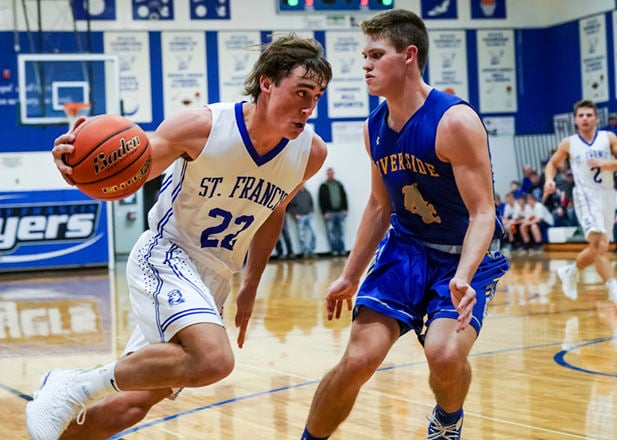 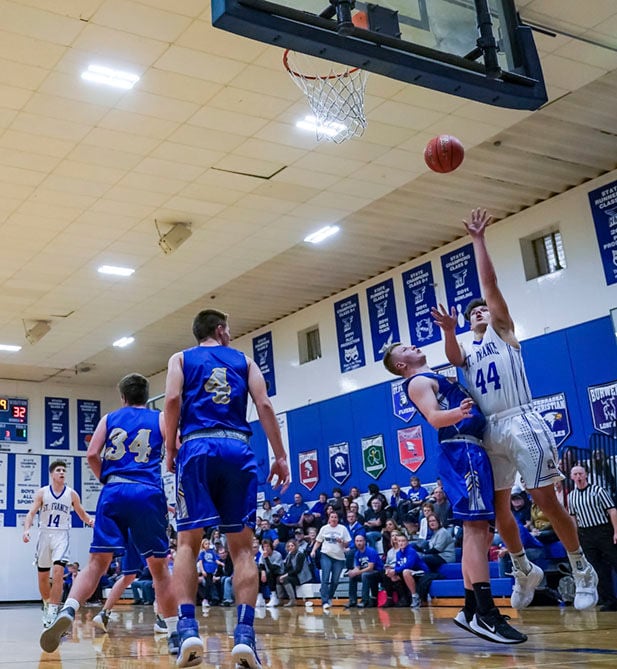 HUMPHREY — For the last five years, Humphrey St. Francis and Riverside have been among the best Goldenrod Conference boys basketball programs. This season was expected to be no different — even with the Chargers' record-setting scorer Tredyn Prososki out due to an injury.

Instead, the preseason Class D No. 3 Flyers saw it as an opportunity to make a statement with an 86-33 shellacking that solidified the hosts as one of the favorites in Class D2 this season.

“We've got a long ways to go,” Kessler said. “We played really well tonight and got things going defensively, which led to our offense. We got the momentum, and the snowball got going in our way.”

The result was so surprising because of the recent history of the programs in a “game of the week” matchup according to the Omaha World-Herald. Riverside had won four of the last five meetings, including three-straight, after St. Francis won three in the 2015-16 season alone en route to the Flyers' most recent state championship. The teams have combined for nine state-tournament berths in the past five seasons.

“It's nice. It's only the third game in, but we knew we would have to play good,” St. Francis sophomore Tanner Pfeifer said. “They're a good team.”

The younger of the Pfeifer brothers was the catalyst for the Flyers. The 6-foot-2 sophomore poured in a game-high 26 points on 12 of 15 field-goal shooting along with a pair of free throws while at the same time manning the top end of a 1-3-1 zone defense that simply smothered the Chargers' outside shooters all game long.

That defense harassed the visiting Chargers for 20 steals, leading to a number of baskets in transition and resulting in four players reaching double figures. Ultimately, St. Francis forced a running clock for the final six minutes with its lead eclipsing 40 points.

Pfeifer's older brother, 6-2 senior Trevor, finished with 16 points and a game-high seven rebounds, and the brothers combined for eight steals. Junior guard Justin Leifeld chipped in 13 points, and 6-1 senior post Dylan Wemhoff came off the bench for 10 points before he fouled out late.

“We were forcing them to throw those rainbow passes. We could have our wings fly up and get those steals,” Tanner Pfeifer said. “Those transitions open it up. We always have fresh legs, so we know we can take advantage of those.”

Riverside, a team normally known for its 3-point shooting prowess, didn't make one for the first 21:45 — more than 2½ quarters. The preseason No. 8 team in Class D1 according to the Omaha World-Herald finished with just two from beyond the arc while shooting 28.9 percent (13 of 45) on the night. St. Francis, preseason No. 1 in D2 by the same publication, sank 6 of 18 beyond the arc and 52.8 percent (38 of 72) from the field.

“I felt we controlled the glass, which was big,” Kessler said. “We didn't give them any second chances. A lot of times, they get those long rebounds and they're able to kick it to their shooters.”

After the teams traded baskets early, the Flyers scored eight-straight points, all by Tanner Pfeifer including a putback of Trevor's missed layup, to take the lead for good at 10-4. The lead reached eight twice in the first quarter, first off a Leifeld deuce before Evan Foltz converted inside the paint to double up the Chargers 16-8 through one.

St. Francis seized control with a 13-2 run to begin the second quarter, punctuated by two baskets in 17 seconds. Tanner Pfeifer put back a miss, and then Trevor Pfeifer's steal and feed to a sprinting Tanner Pfeifer made it 29-10 with 3:40 until halftime. Paul VanDeWalle, who had eight points and seven rebounds coming off the bench for Riverside, tossed in back-to-back putbacks to put the Chargers within 33-16.

But the Flyers tacked on the final eight points of the half for a 25-point cushion at the break. St. Francis then outscored Riverside 45-17 in the second half, including a 22-4 advantage in the fourth quarter, to finish off the win.

“They're a really good team, and they're going to have a great year, especially when they get Tredyn back,” Kessler said "But tonight, we played well and we were ready to go.”

It was a “Dr. Jekyll and Mr. Hyde” kind of night for both Battle Creek and Lutheran High Northeast basketball teams at the Clayton and Vivian Andrews Activity Center on Thursday night.

Norfolk Catholic’s 36-30 dual win over Creighton was a byproduct of the “unexpected.”

Nebraska Democrats, including Norfolk candidate for Senate, to gather

Democrats from around the state, including many political candidates, are expected to converge on Norfolk this weekend for a state gathering.

West Point native takes experiences on the links to instructing

It takes knowledge, skill, commitment and craft to be successful on the golf course. Those with experience and the ability to teach the game of golf can stay in the sport for a long time.

COLUMN: Wayne ascends to No. 4 after winning 9 of last 10

Regarded as one of the top teams in the Mid-State Conference coming into the season, it was rather surprising to see Wayne mired in a four-game losing skid at the outset.

Jacob James
was this week's winner.