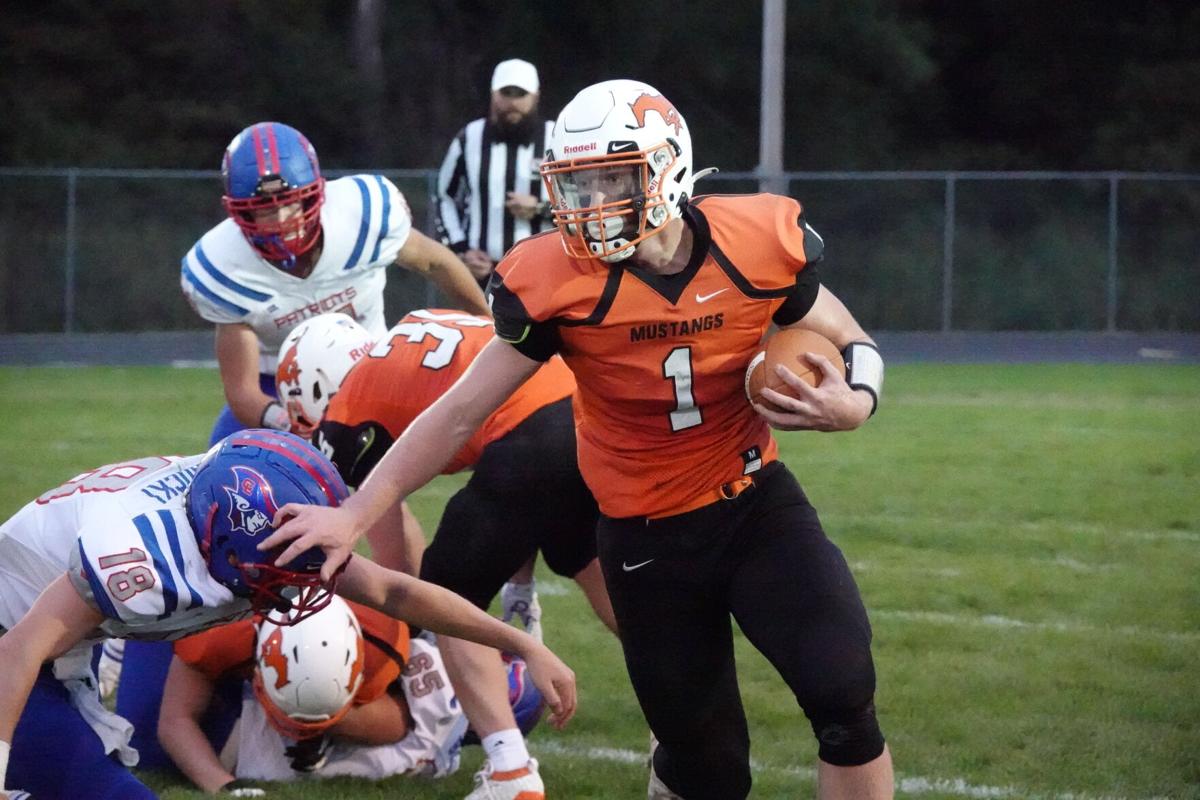 Sutton Pohlman of Stanton stiff-arms Lance Paprocki of Clarkson/Leigh as he runs with the ball down the sideline during Friday's game in Stanton. 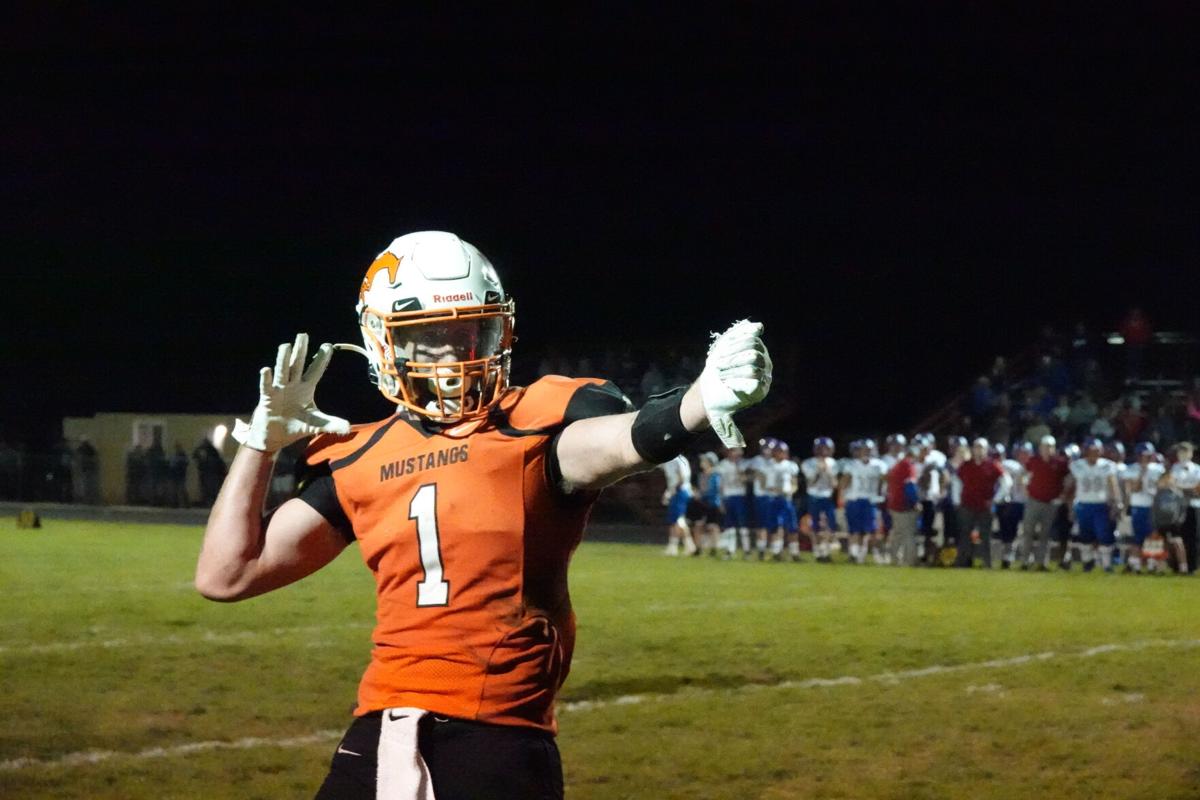 Sutton Pohlman of Stanton pretends to fire a bow and arrow after throwing a touchdown pass against Clarkson/Leigh during the second half of Friday's game in Stanton. Pohlman also rushed for four touchdowns. 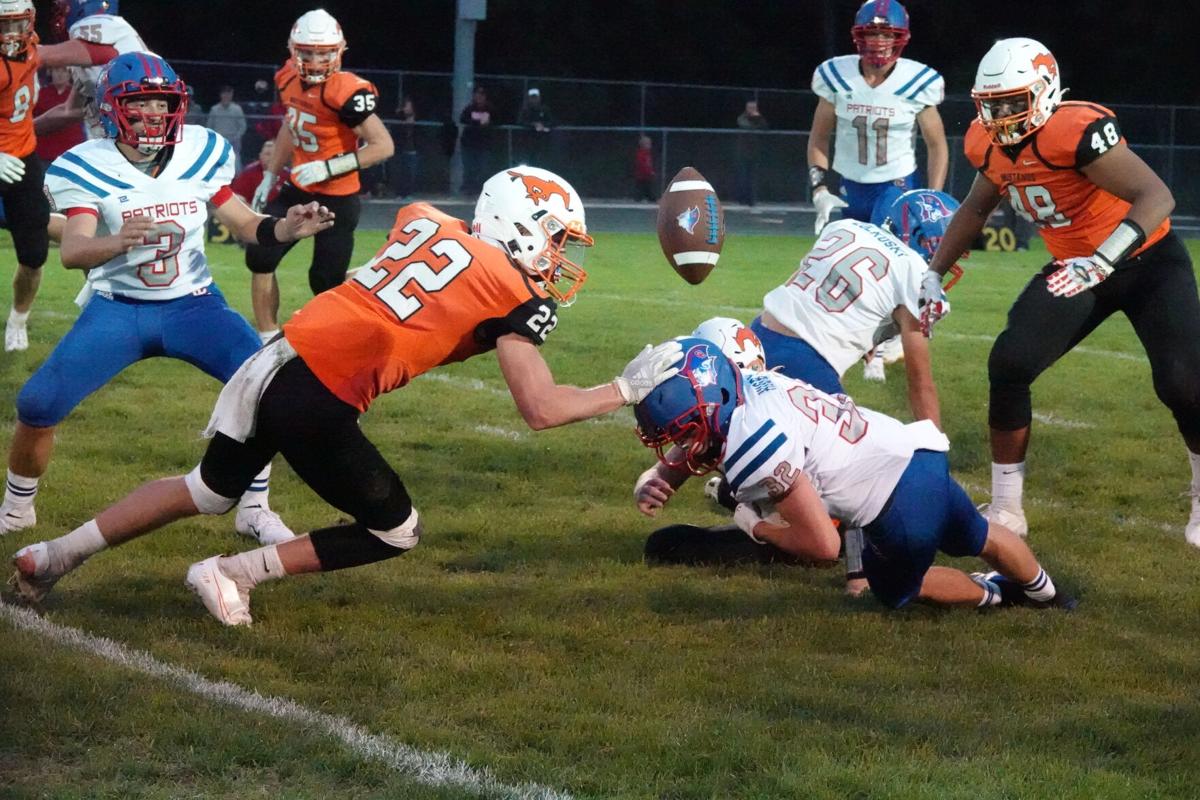 Jason Claussen of Stanton looks toward the ball after it was fumbled by Clarkson/Leigh during Friday's game in Stanton. 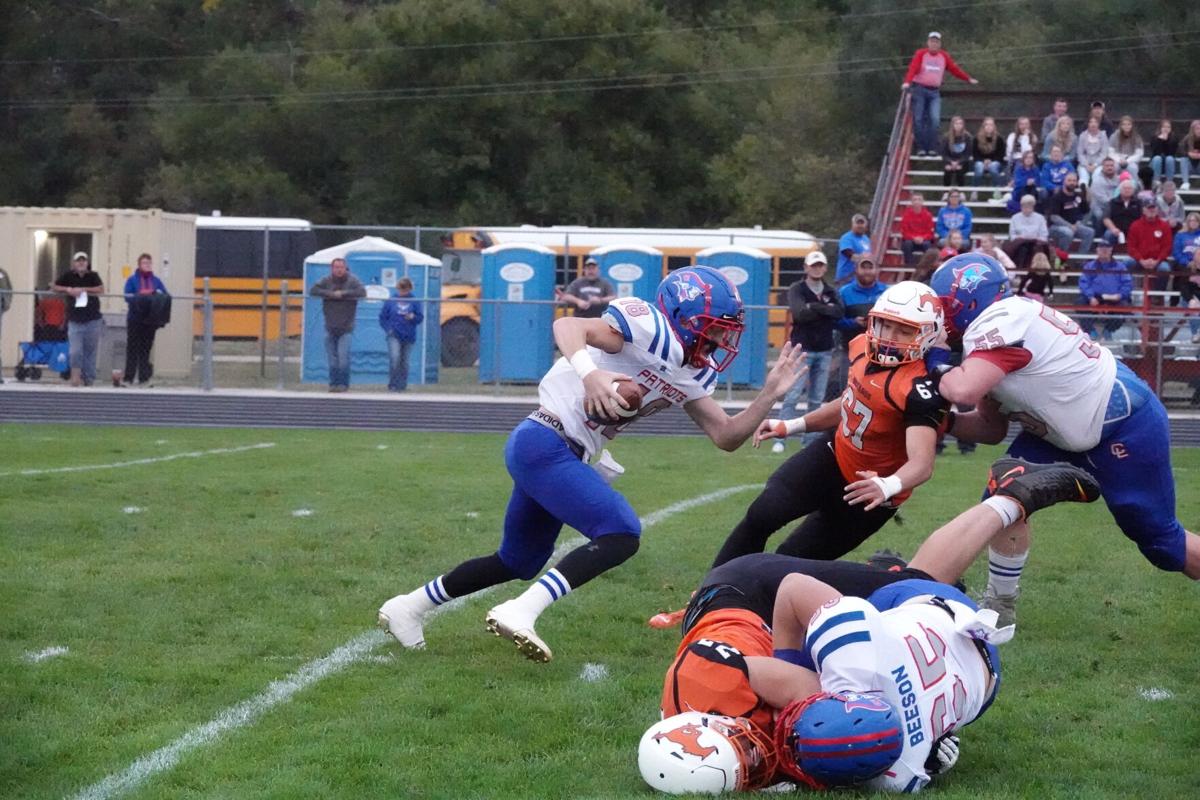 Lance Paprocki of Clarkson/Leigh runs up the middle as Cooper Vance (right) blocks Mason Bruggeman of Stanton during Friday's game in Stanton. Also in on the play are Jordan Gartner of Stanton (bottom from left) and Mitchel Beeson of Clarkson/Leigh. 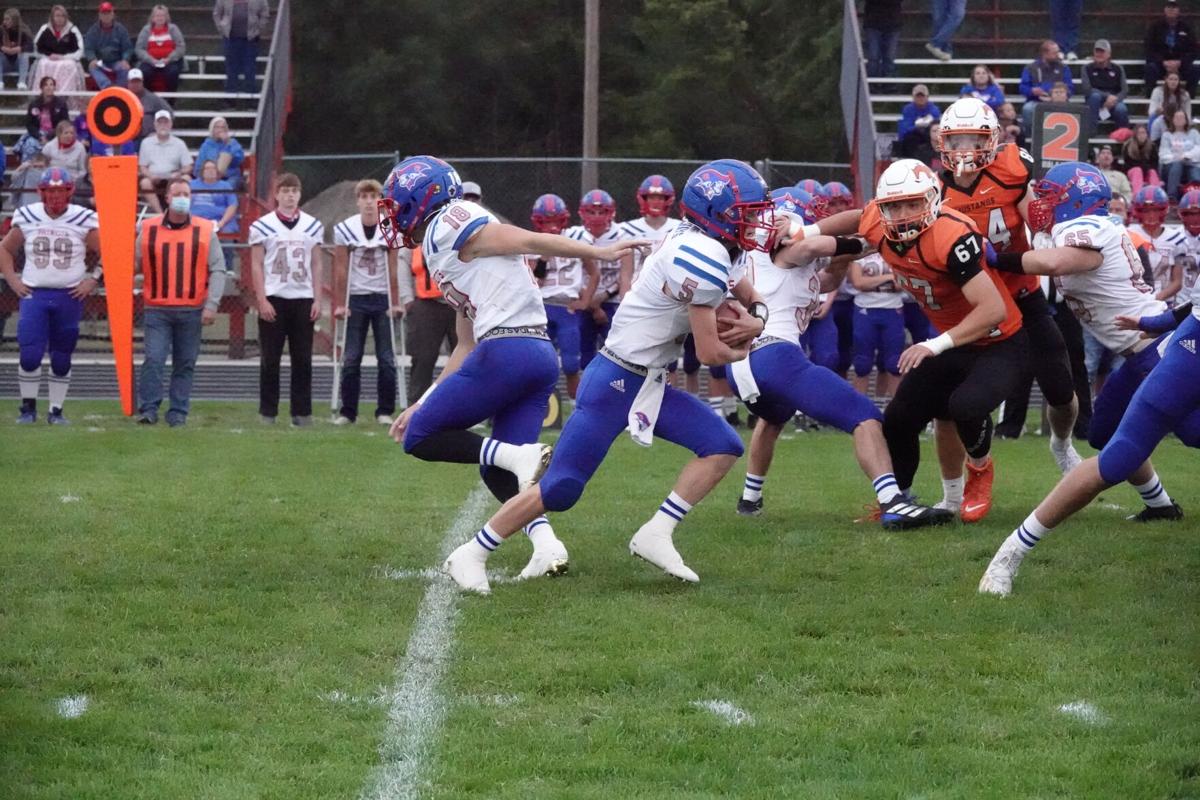 Eli Hays (5) of Clarkson/Leigh takes the ball on a handoff from quarterback Lance Paprocki during Friday's game at Stanton.

Sutton Pohlman of Stanton stiff-arms Lance Paprocki of Clarkson/Leigh as he runs with the ball down the sideline during Friday's game in Stanton.

Sutton Pohlman of Stanton pretends to fire a bow and arrow after throwing a touchdown pass against Clarkson/Leigh during the second half of Friday's game in Stanton. Pohlman also rushed for four touchdowns.

Jason Claussen of Stanton looks toward the ball after it was fumbled by Clarkson/Leigh during Friday's game in Stanton.

Lance Paprocki of Clarkson/Leigh runs up the middle as Cooper Vance (right) blocks Mason Bruggeman of Stanton during Friday's game in Stanton. Also in on the play are Jordan Gartner of Stanton (bottom from left) and Mitchel Beeson of Clarkson/Leigh.

Eli Hays (5) of Clarkson/Leigh takes the ball on a handoff from quarterback Lance Paprocki during Friday's game at Stanton.

STANTON — Going into this season, Stanton had won just six games in the past three years combined with matching 2-7 records.

The Mustangs finally got over that plateau, and in a big way.

Sutton Pohlman rushed for 230 yards and four touchdowns, completed his only pass attempt for another touchdown, and ninth-ranked Stanton turned an 8-6 halftime deficit into an eye-opening 42-20 triumph over preseason No. 1 Clarkson/Leigh.

“It's awesome for us,” Pohlman said. “We've been 2-7 for the last three years, so getting over that two-win hump is a great thing for us. It's only up from here.”

The final swing of momentum came midway through the fourth quarter.

On fourth-and-5 at its own 20 and trailing by 12, the currently second-ranked Patriots elected to go for it. Lance Paprocki surged ahead near the line to gain, but he was stonewalled by Jordan Gartner first, and Brayan Acuna finished off the tackle a yard short. On the next snap, Pohlman broke a tackle and took off for a 24-yard touchdown, and he added the two-point conversion for a 34-14 lead with 7:44 left.

Clarkson/Leigh didn't go away. Paprocki had two rushes totaling 53 yards to set up Carter Hanel's 10-yard end-around touchdown with 5:11 to go, and then Clarkson/Leigh recovered the ensuing onside kick trailing 34-20.

But the Mustangs made one last stand, holding the Patriots to three yards in three plays and an incomplete pass on fourth down. Four plays later, Pohlman juked one defender and bulled over another as he capped the scoring with his 11-yard run with less than two minutes remaining.

“We were able to get some stops up front,” Stanton coach David Stoddard said. “It wasn't anything miraculous. It was just assignment football and technique football.”

The second-half surge was a result of the Mustangs wearing down the Patriots.

“They were pressuring us,” Clarkson/Leigh coach Jim Clarkson said. “They were slanting, moving around a lot, and our guys just had a hard time keeping up. Give credit to coach Stoddard and his staff. They did a nice job. They had a good defensive game plan against us.”

Pohlman, who primarily played quarterback in the first half, showcased his versatility on the first two possessions of the second half.

Lined up as a wingback, he took a handoff on an end-around and broke free for a 55-yard touchdown exactly one minute into the third quarter to give Stanton the lead for good. On the next drive, Pohlman caught a 12-yard pass from Adam Arens on third-and-10, gained 16 yards on a second-and-10 quarterback draw, and capped it by throwing to Trey Elbert in the corner of the end zone for a 20-8 lead midway through the third quarter.

“We ask him to do a lot, and he's used to doing that,” Stoddard said. “With his skill set, we're able to do that. We're able to have him be the quarterback, be a receiver, and obviously just play running back, too.”

Clarkson/Leigh answered with its second long scoring drive of the night, marching 11 plays and finishing with Lance Paprocki's second short touchdown run on the first play of the fourth quarter. But Pohlman followed with a 28-yard gain on the initial snap of the next drive, and five plays later, Gage Tighe got into the scoring action for the Mustangs by powering up the middle for the last five yards.

Stoddard said that, in the first half, the Mustangs observed the Patriots adjusting their defensive line alignment and technique. That led to a halftime change.

“We drew up a few plays that we thought would work,” he said. “It wasn't a big adjustment. It was all stuff in our base offense.”

The game started out with Clarkson/Leigh in full control, though. It opened Friday night with a 15-play, 53-yard touchdown march that took the first 7:26 of the game, capped by Paprocki's 1-yard plunge. Stanton promptly went three-and-out, and its punt was partially blocked. Mason Whitmore returned it to the 36, but the Patriots couldn't capitalize, and Stanton followed with its lone scoring drive of the first half.

“We came out and did a good job,” Clarkson said. “I thought our offensive line did all right early, but we got wore down a little bit.”

IT WAS A battle of teams that have both been hit hard by injuries.

It was Stanton's second game without quarterback Parker Krusemark, and it was Clarkson/Leigh's second full game without preseason Super Six running back Tommy McEvoy. In addition, both teams had a starter get injured during the first half of Friday's game.

Sophomore fullback Drew Beeson was helped off the field on Clarkson/Leigh's first drive of the game and did not return. Jason Claussen had to exit for Stanton several plays after he recovered a fumble on defense, was eventually taken from the sideline via a stretcher to the ambulance, but Claussen returned to the complex without pads on during the fourth quarter.

“Once we lost the Beeson kid — we were running him in the backfield some tonight — we had to go with a freshman, and we just didn't have enough punch tonight,” Clarkson said.

* Clarkson/Leigh finished with 233 yards of total offense, and nearly half of that (105) came in the fourth quarter alone. Although the scoreboard didn't show it, the Mustangs controlled things in the second and third quarters by limiting the Patriots to 76 yards total in those 24 minutes.

* Brayan Acuna was a weapon on special teams for Stanton. He delivered touchbacks to give Clarkson/Leigh a long field starting at its own 15 on four of his seven kickoffs.

WISNER — A multi-year search for a suitable location for a new water tower in Wisner has settled on a third site that was agreed upon at a special hearing Monday evening.